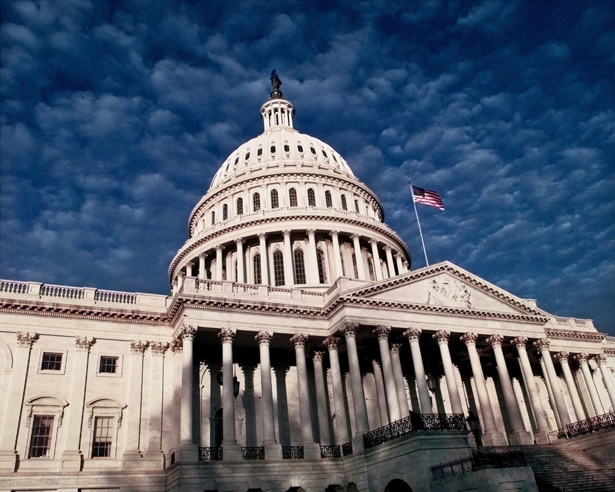 The US Capitol (AP)

The political crisis of confidence created by an activist Supreme Court’s decisions in cases such as Citizens United v. FEC and McCutcheon v. FCC is beginning—finally—to garner appropriate consideration from the US Senate. That’s important. What’s even more important is that it is focused on the proper response to the crisis: amending the US Constitution in order to restore the right of citizens and their elected representatives to organize elections where the vote matters more than the dollar.

On Tuesday, Illinois Senator Dick Durbin, the chamber’s assistant majority leader, chaired what Public Citizen identifies as “the first-ever hearing by the Senate Judiciary Committee on the need to amend the Constitution to overturn egregious US Supreme Court rulings like Citizens United and McCutcheon, which gave corporations and the ultra-wealthy the green light to spend unlimited amounts of money to influence elections.”

Durbin was an engaged chair of the hearing by the Constitution Subcommittee of the Senate Judiciary Committee, having already declared, “It’s increasingly clear that the only way to really reform our system is to pass a constitutional amendment to regulate how we finance our elections.”

The senator is right. And the American people are supportive of his position; sixteen states and more than 500 communities have formally asked Congress to back an amendment to clarify that, despite what the Supreme Court might imagine, corporations are not people and money is not speech. Still, the significance of this hearing, which comes as Senate Democratic leaders are talking about scheduling an amendment vote, ought not be underestimated. Nor should the fact that the number of senators supporting a constitiutional amendment is rapidly approaching a majority.

Polling shows that the clear majority of Americans believe that our elected officials do not serve the interest of the great mass of citizens who actually elect them, which ought to be the basic premise of governance in a democratic republic. Rather, by a two-to-one margin, Americans believe government officials are inclined to promote policies that favor the wealthy rather than the working poor.

Why? More than three-quarters of Americans now tell pollsters that politicians are “corrupted” by campaign donations and lobbyists. They recognize that American University professor Jamie Raskin (who also serves as a Maryland state senator) is right when he tells the Judiciary Committee members that “within the governmental process and electoral process there are right reasons for those who hold public office to make decisions and there are wrong reasons—and a wrong reason is the money you are either going to put into your pocket or huge amounts of money that you’re going to put into your campaign.”

There is ample evidence of what happens when fundraising trumps common sense. At a time when Americans say government can and should do more to address poverty, Congress votes to cut Food Stamps for those who are hungry—claiming that programs that provide nutrition to the needy are unaffordable even as special tax breaks for the very wealthy are kept in place.

The disconnect between the popular will and public policy is so radical that it fosters cynicism and disengagement. Against the reality of big-budget campaigns that flood the airwaves with attack ads—the most effective tools for voter suppression—voters give up. Survey research tells us what we already knew from anecdotal evidence: voters are turning off to a process that does not respond to them, and that overwhelms them with commercials that tell them Democrats and Republicans, liberal and conservatives, should all be viewed negatively.

Turnout for US elections is dismal—far below that for comparable countries. National elections in Europe regularly draw turnouts that are as much as 20 percent (Germany), even 30 percent (Norway), greater than US elections. India’s recent parliamentary elections drew a turnout of over 66 percent, while this year’s congressional elections in the United States may not draw 40 percent to the polls.

It should come as no shock that the decay in democratic processes has caused a decay in enthusiasm: a May Gallup poll found that 53 percent of Americans surveyed were less excited about voting in this year’s mid-term elections—despite the fact that control of the US Senate is up for grabs, as are most statehouses—than in previous elections. The overall decline in enthusiasm is so dramatic that analysts have begun to predict that the 2014 election will see a record low turnout. And primary election results from states such as Illinois and Texas confirm the concern—despite the fact that those states held competitive elections for important and experienced skyrocketing campaign spending.

Far from fostering engagement and excitement, big money creates a constrained and dysfunctional politics. The national circumstance is bad, and it will get worse. That’s why citizens have been demanding dramatic change: a constitutional amendment to overturn the Supreme Court’s activism on behalf of a high-spending, low-turnout politics that shifts more and more power to economic and electoral elites.

What’s at stake is more important than the predictable wrangling between Republicans like Senate minority leader Mitch McConnell (who told the subcommittee that leveling the political playing field would create “preferential treatment,” presumably for non-billionaires) and Democrats like Senator majority leader Harry Reid (who argued that it was not the intention of the founders of the American experiment to “give corporations a vote” or to “give dollar bills a vote.”) And it is far more important than the petty posturing by those such as Texas Senator Ted Cruz—who seem to imagine that the founders wrote a free-speech protection into the Constitution in order to guarantee that the wealthy would always be able to shout down the poor.

The Republican firebrand went all in at Tuesday’s hearing, demanding to know: “When did the [Democrats] abandon the Bill of Rights?” And claiming that the amendment “would give Congress the power to ban books and muzzle movies.”

The Texas Republican’s rant inspired laughter in the hearing room, along with a mild rebuke from Senator Chuck Schumer, D-New York, who said, “I think if Thomas Jefferson were looking down at what’s being proposed here, he would agree with it.” Schumer, historically one of his party’s most ambitious fundraisers, is now one of forty-three senators (forty-one Democrats and independents Bernie Sanders of Vermont and Angus King of Maine) who back a specific amendment—proposed by New Mexico Democrat Tom Udall—to address the money-in-political crisis.

A even stronger rebuke has come from the American people. More than 2 million of them signed petitions that were delivered to the Senate by People for the American Way, Free Speech Is for People, Public Citizen, Common Cause, the Center for Media and Democracy and other groups that favor an amendment.

Americans recognize that the promise of American democracy is now fully threatened.

As former Supreme Court Justice John Paul Stevens told the Senate Rules Committee in late April, “Unlimited campaign expenditures impair the process of democratic self-government. They create a risk that successful candidates will pay more attention to the interests of non-voters who provided them with money than to the interests of the voters who elected them. That risk is unacceptable.”

To that end, Justice Stevens advocates for an amendment to the Constitution that simply says, “Neither the First Amendment nor any provision of this Constitution shall be construed to prohibit the Congress or any state from imposing reasonable limits on the amount of money that candidates for public office, or their supporters, may spend in election campaigns.”

Whether the eventual amendment adopts the language Justice Stevens has proposed, or some variation thereon, the bottom line remains the same: the Constitution must be amended in order to preserve democratic self-governance. And it is good, very good, that the Senate is beginning to recognize this reality.