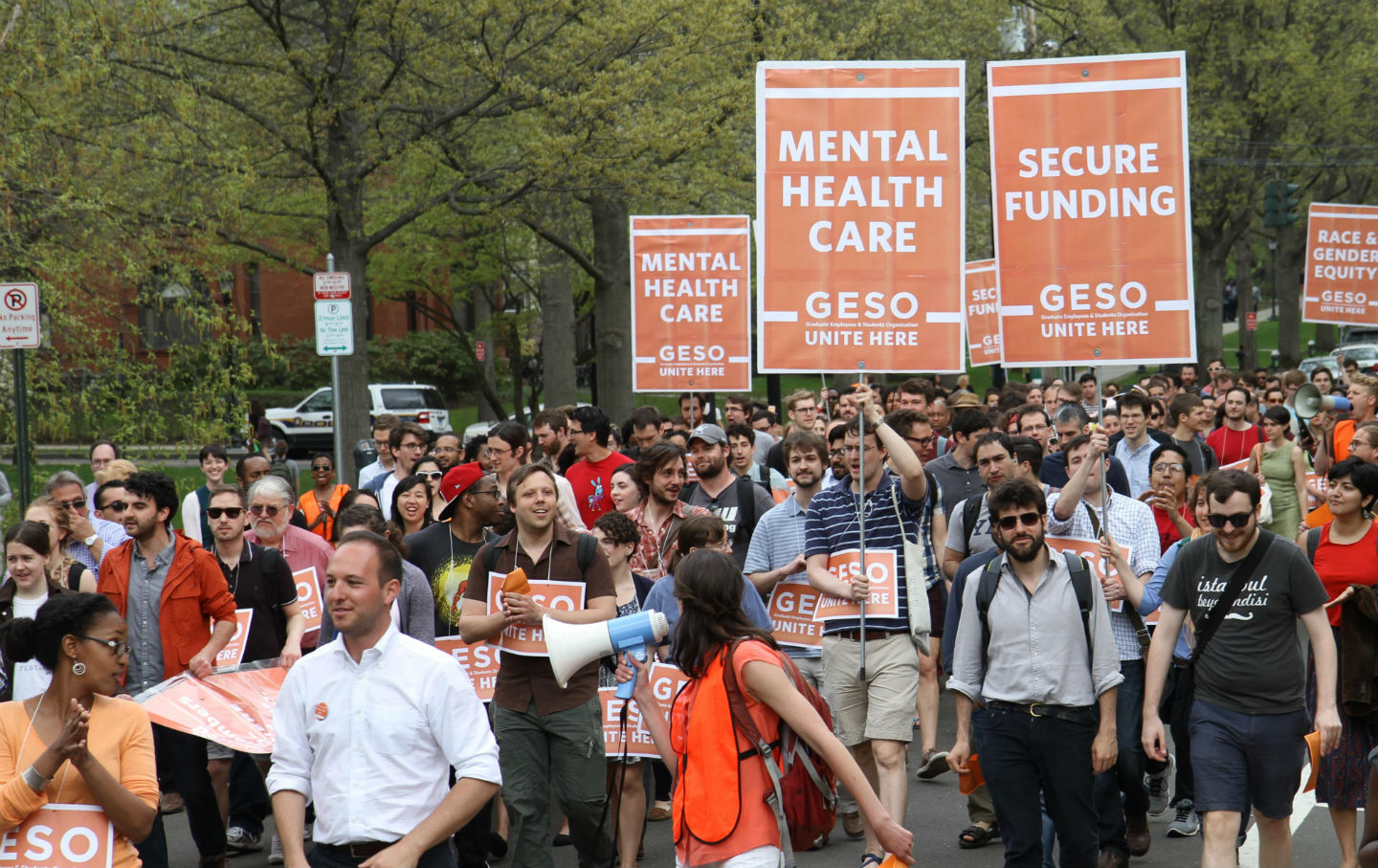 Yale graduate workers and their allies march to the provost’s office on May 5, 2015. (Courtesy of Yale Unions)

Yale graduate students ramped up their organizing campaign on Tuesday as hundreds marched to deliver their union’s demands to the provost, calling for recognition and respect as part of the campus workforce.

They presented a petition to Provost Ben Polak with more than 1,100 signatures supporting the establishment of a graduate union, representing a large majority of the proposed bargaining unit of doctoral researchers and teaching assistants. The action marks the latest push by the Graduate Employees and Students Organization (GESO-UNITE HERE) for official recognition, and now, the solidification of their contract priorities. The campaign, which has been ongoing for years, has been reinvigorated lately with the unprecedented success of a graduate union drive at New York University with United Auto Workers.

Although the National Labor Relations Board (NLRB) has historically refused to recognize graduate workers as regular university employees (only about sixty U.S. campuses have recognized graduate worker unions), NYU’s relentless campaigning eventually won them an uncontested election process with the hard-fought cooperation of the administration. Graduate teaching and research workers at the University of Connecticut followed. Now the New School and Columbia are ramping up their own pressure campaigns to form unions with the voluntary recognition of the administration.

“The example that we really take inspiration from is the NYU example of going to the administration…getting to an election that’s free, fair and neutral, and getting to contract negotiations,” political science graduate student and GESO Chair Aaron Greenberg told The Nation.

And should push come to shove, activists have been heartened by the NLRB’s recent decision to reinstate the graduate workers’ union petitions at the New School and Columbia. The decision overrode the administrations’ opposition as well as an earlier dismissal of the case by a local regional director. The NLRB also moved to review its earlier precedent blocking the recognition of graduate students as workers (resulting from a 2004 case that thwarted a union drive at Brown University).

Despite broad support for GESO among local sister unions and officials, the administration issued a statement on Tuesday contending that Yale already provides generous support to graduates and representation through student government bodies, and that the administration “believes that its graduate students are students, not employees, and it would not be in the best interest of the students, the faculty, or higher education to change the teacher-student relationship to a manager-employee relationship.”

Yet GESO activists would argue that relationship has already changed, as graduate students have become a critical component of the academic workforce. The only change they seek is long overdue recognition of their labor and just compensation, just as their fellow campus workers did when they unionized decades ago.

GESO demands income security for doctoral students across all departments, including the inclusion of scientists under a recent six-year funding guarantee for social science and humanities students. Activists are also pressing to restore recent cutbacks to dissertation fellowship funding and teacher pay.

Mental healthcare is another key priority; according to GESO, upwards of half of graduate students will seek mental health services while at Yale, but “Many face long wait times and inadequate options for available treatment.”

Mathematics third-year student Tif Shen spoke to hundreds of union supporters at the rally, about seeking therapy at Yale after struggling with depression for over a year, only to face a wait time of a month-and-a-half, and ultimately to discover the therapist was “clearly overbooked and over-committed.… I didn’t have the support and help that I need from my therapist.” Student-workers want an expansion of the staff and greater access to treatment sessions, plus a holistic graduate wellness program.

Perhaps the most far-reaching demands revolve around correcting Yale’s failure to meet its own benchmarks for increasing the faculty’s racial and gender diversity. GESO’s recent analysis of employment patterns indicates the university has made little progress since 2005 in raising the number of either women or people of color on the faculty, and gaps between career-track “ladder” positions and non-ladder positions persist. According to self-reported data, women and people of color making up 29 percent and 16 percent of ladder positions, respectively, in the Faculty of Arts and Sciences, but over 43 percent and 25 percent of non-ladder positions.

Facing such racial disproportionality and underrepresentation in the faculty, Political Science and African American Studies Sixth Year Adom Getachew said in GESO’s statement, “I’m one of just a handful of black graduate students in my department, and…I’ve struggled to find mentorship and intellectual community in my time here.” And in recognition of students’ caregiving responsibilities, GESO is pushing for affordable childcare services to “Value and affirm graduate parents as they seek to balance work and family life.” Finally, GESO members want a greater voice on workplace justice through “a fair and neutral grievance procedure.”

The demands were developed through student surveys and extensive discussions among members. “It’s a real testament to the consensus we were building,” Greenberg said, which “came out of the membership through…thousands of conversations, [so] that in the course of just a short semester we got a majority of people on campus in our bargaining unit on the petition and really excited about it.”

While GESO struggles for a place at the bargaining table, NYU’s graduate union just sealed a contract providing a competitive salary package with scheduled pay raises, and establishing non-discrimination and grievance policies.

Despite Yale’s reputation for insularity, GESO’s campaign is gathering steam off-campus as well, as they collaborate with other UNITE HERE locals to pressure the administration to agree to a union.

The testimonies featured in GESO’s “Ready to Negotiate” campaign exude this solidarity, featuring pairs of union campaigners. Union workers from the community and their graduate student counterparts speak together about their shared stake in building labor’s presence on campus. As graduate instructors, administrative staff, or grassroots organizers representing New Haven’s working-class neighborhoods, all the groups rallying behind GESO are both integral to and dependent on Yale’s massive institutional economy. Whether they seek a fairer pension or a more diverse community of scholars, the workers know their university can do better.