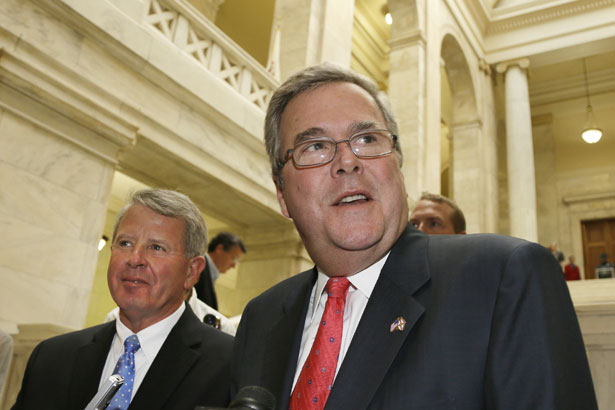 With Chris Christie flailing, is there another governor in the wings? Or an ex-governor, perhaps?

A new round of speculation is underway about whether Jeb Bush, the former Florida governor, might be considering a run in 2016. According to Newsday, which reported on a speech that Bush delivered to a high-powered group on Long Island, New York, the former governor said that he’ll decide whether or not to run by the end of 2014. And, responding to a question about whether or not his last name is something he’ll have to overcome, Bush allowed as to how both he and Hillary would have to overcome the dynasty issue:

I get the point. It’s something that, if I run, I would have to overcome that. And so will Hillary, by the way. Let’s keep the same standards for everybody.

In any case, if Bush does run, it’ll be because the mainstream Republicans and the big donors behind the GOP need someone else to carry their water against the insurgents of the Tea Party. For many of them, both in 2011 and again today, Christie was seen as the savior who could stop any of the tea-drinking Republican Senate freshmen—Marco Rubio, Rand Paul and Ted Cruz—from making a serious bid. Other possibilities include Scott Walker, the union-busting governor of Wisconsin and John Kasich, the center-right Ohio governor, but neither of them is particularly exciting or has much name recognition. Could it be another Bush?

Everyone’s got something to say. Charles Gasparino, a Fox Business Network senior correspondent and columnist for the New York Post, says that the scuttlebutt on Wall Street is that many of the heavy hitters are backing Hillary Clinton, while the conservative financiers who’ve long supported Christie, including Home Depot’s Ken Langone and ex-AIG poohbah Hank Greenberg are backing off—and looking at Bush. He writes:

In fact, it’s too soon to write Christie off: He might be able to recover from this mess (as long as there continues to be zero evidence that he had any idea his flunkies had snarled traffic approaching the George Washington Bridge to punish a political opponent). But the Wall Streeters I speak to (people with direct access to Christie and his inner circle) say the Christie presidential campaign is clearly on life support: They think he’s in the clear himself, but the stench from the scandal is starting to look impossible to overcome. They cite the cool reception Christie has been getting recently from Republican establishment types outside of his home turf in the Northeast, and the fact that many fund-raisers are now looking to former Florida Gov. Jeb Bush as the party’s savior.

On CNN’s Inside Politics, John King had this to say:

[Bush] has said he’s going to think about 2016. A lot of people think he’s not serious, he just likes the spotlight, that he won’t want to run. But I will tell you this: I spoke to several Republican fundraisers this week who got phone calls from Jeb Bush, the former Florida governor, who hasn’t said he’s going to run but is starting to ask some serious questions. So people think that at least he’s giving it a very serious look.

Later, on CNN, King added that after speaking to “a half dozen GOP sources this past week, several reported having reliable information about Bush conversations with GOP moneymen.”

Perhaps the biggest GOP funder of all, the ultra-right, hardline pro-Israel hawk and casino billionaire Sheldon Adelson, will have a say. Next month, under the watchful eye of Adelson, several Republican hopefuls—including Christie, Walker and Kasich—will travel to Las Vegas to appear at the Republican Jewish Coalition’s for its annual spring meeting, which boasts Adelson on its board of directors, along with other wealthy conservatives such as hedge fund magnate Paul Singer. And, according to the RJC, Jeb Bush will speak at a VIP dinner for big contributors.

Bush is traveling elsewhere, too, to raise his profile if nothing else, speaking at college commencements and, today, at a fundraiser for the Long Island Association at an invitation-only event at a local country club—and, of course, his bilingual son George P. Bush is campaigning for a statewide post in Texas, courting Hispanic voters. This spring, Jeb Bush will be in New York City to speak and get an award from the Manhattan Institute for Policy Research. Says Ira Stoll in The New York Sun:

The save-the-date notice that went out last week about the dinner, which is to take place in May, will only add to speculation about whether Mr. Bush intends to run for president in 2016. If he does, accepting the Manhattan Institute invitation is a smart move—it will provide Mr. Bush some valuable exposure before a large audience of right-of-center donors and intellectuals.

But, as Stoll points out, Bush “went to work for Lehman Brothers in 2007, which was poor timing.” Indeed.

According to the Jim Geraghty of National Review Online, speculating on whether Christie’s troubles will boost Bush, a “senior Republican strategist” described the situation facing Christie and Bush this way:

Bush’s speeches are getting better, tighter, and more campaigny, from what I’ve noticed. I still think Jeb is only a three-in-ten shot to go, but if you’re in his shoes, and Chris Christie has taken a huge hit in stock value—wouldn’t you wait and see? If Christie survives and runs, it’s a harder proposition by far, obviously.

Like Christie, Bush will have serious problems winning over far-right voters, Tea Party types, and others. Bush has staked out positions on issues such as immigration and education policy that are anathema to the Tea Party—which, of course, is what makes both Christie and Bush attractive to mainstream Republicans such as the US Chamber of Commerce, other Big Business groups and Wall Street. As Geraghty points out, the US Chamber has used Bush to tape commercials for favored candidates in local races recently. And that’s part of the reason recent polls of Tea Party voters don’t help Christie or Bush, who finished dead last—twenty-second and twenty-first, respectively, out of twenty-two!—in a poll of 62,000 Tea Party activists. (Cruz and Paul won, not surprisingly.)

But Bush, perhaps capitalizing on his nearly 100 percent name recognition and on Christie’s scandals, has consistently topped Christie in polls taken among mainstream voters. In one recent poll, among Florida Republicans, Clinton beats Bush 49 to 43 percent, while she tops Christie overwhelmingly at 51 to 35 percent—but, of course, that’s in Florida, where Bush remains extremely popular among the GOP faithful. An according to a Washington Post poll in January, Republicans and Republican-leaning voters favored Paul Ryan (20 percent), then Jeb Bush (18 percent) and Chris Christie (13 percent), in that order. (Back in 2013, Christie consistently led most polls.)