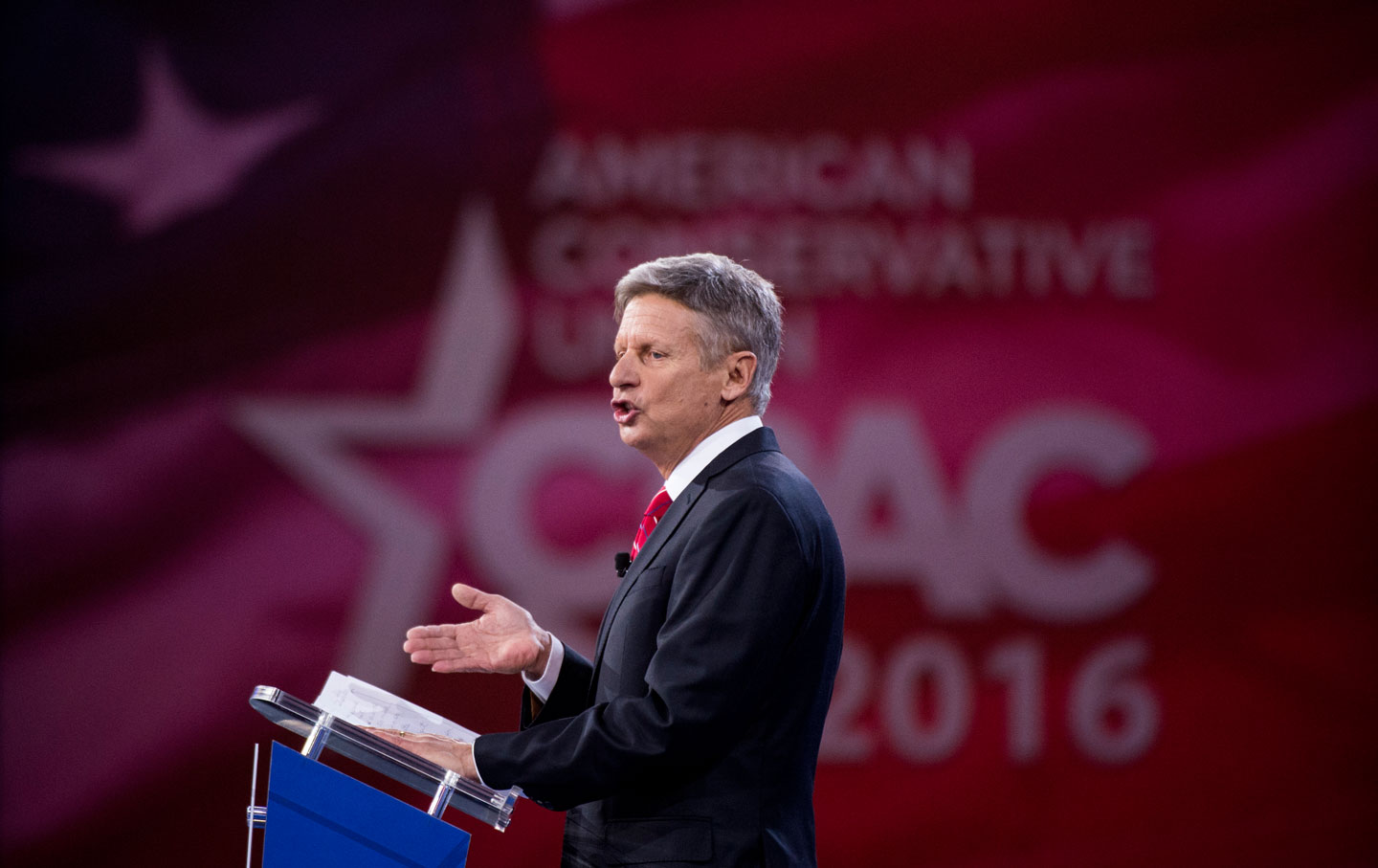 Shortly after Donald Trump crushed Ted Cruz in the Indiana primary that the Texan’s backers has set up as the final “firewall” against the billionaire’s seizure of the Republican Party, one of the GOP’s most ardent #NeverTrump activists was casting his gaze across the party line.

Wisconsin state Assembly majority leader Jim Steineke, a stalwart conservative who played a critical role in the most successful “Stop Trump” intervention in the Republican primary process—when Wisconsin Governor Scott Walker, radio hosts and conservatives diehards rallied behind Cruz and delivered him a sweeping victory in the state’s April 5 primary—tweeted: “Might be time to check out this @GovGaryJohnson guy…. #JustSayin”

That wasn’t any kind of formal endorsement. But Steineke, who announced that he was relinquishing his position as an alternate delegate to the Republican National Convention in July was “#JustSayin” to reporters in Wisconsin, “At this point there is not a major party candidate who has earned my vote.” And the legislator was generous enough to tweet not just a reference to Johnson but a link to the Libertarian’s website—where Johnson seeks support from politically homeless #NeverTrumpkins.

Johnson knows about disenchanted Republicans. A former GOP governor of New Mexico, he briefly sought the party’s 2012 presidential nomination. Johnson proved to be too open-minded for the GOP—the party and its media partners excluded him from the majority of the GOP debates—and jumped ship to the Libertarians that year. He is again seeking the Libertarian nomination this year. At the same time, he is making an overt appeal to #NeverTrump Republicans—opening a recent video with the line: “Two-term Republican governor Gary Johnson here…”

Pitching himself as a fiscal conservative who supports free trade policies, Johnson sounds like an easy fit for renegade Republican establishment types—telling them, “Look, I can’t support Trump. You can’t either. We can fight for small government and conservative values.”

Of course, it’s not that easy.

Johnson is, like most Libertarians (and some Republicans), a big critic of big government—he says Milton Friedman is his favorite political philosopher, and calls for abolishing not just the Department of Education but also the Department of Housing and Urban Development. He also supports “entitlement reforms” so sweeping that they would make Paul Ryan salivate.

But, unlike most Republicans, Johnson’s opposition to big government gets out of the conservative comfort zone. He’s an fierce critic of regime-change wars, and has supported deep cuts in military spending. “I do not know how you can have a discussion on cutting what we spend nationally without talking about military spending,” he said during the 2012 race, when he proposed a 43 percent cut in Pentagon spending. “Can we provide a strong national defense for our country and still reduce military spending by 43 percent?” asked Johnson. “My answer is: Yes. And the operative word would be ‘defense,’ as opposed to offense—as opposed to nation-building.”

Johnson is also a fierce critic of the surveillance state, who thanked Edward Snowden at a 2013 “Stop Watching US: Rally Against Mass Surveillance” in Washington and decried NSA spying as “egregious government overreach.” At the same rally, he declared, “There’s only one way to fix the Patriot Act, and that’s to repeal the Patriot Act.”

And don’t get Johnson started on the drug war. He made his name as a passionate advocate for legalization of marijuana and he says, “Would the world be better off if all drugs were legal? Yes. The world would be better off, [since] 90 percent of the drug problem is prohibition-related, not use related.”

“(Bernie) Sanders, I think, is who I’m in line with when it comes to foreign policy.” — Libertarian Gary Johnson

Even when he criticizes Trump, as he has for months, Johnson ends up taking positions that are so reasonable and responsible that he might unsettle many of the #NeverTrump conservatives who backed Cruz. For instance, Johnson says, “I really think that Donald Trump has the opportunity here to really take Republicans down and the Republican Party will no longer be if he’s the nominee. Starting out with deporting 11 million illegal immigrants, following that up by building a wall. As a border state governor, I’ll tell you that’s crazy.”

So we are in uncharted territory here. Some responsible Republicans (and there are still a few) and some sincere conservatives (and there are still a few) will vote for Hillary Clinton if she is the Democratic nominee. There are others who will simply refuse to vote. But there are many Republicans who are looking for an alternative. Some are still talking up the prospect of an independent run by one of their own—such as Nebraska Senator Ben Sasse—but that would require a fast and furious (and very expensive) fight for ballot lines. The Libertarians already have more than 30 ballot lines and, with Johnson on them, they might well be able to stake a claim on a chunk of #NeverTrump votes.

Indeed, the magazine Reason reports that, on the night of the Indiana primary, shortly after Trump was positioned as the GOP’s presumptive nominee, Google Trends detected “a surge in searches for ‘Libertarian Party’” on the Internet. And when pollsters have included his name in their survey—a rare circumstance up to this point—they have detected something of a surge in support for Johnson. A March Monmouth University poll had Johnson at 11 percent, compared with 34 percent for Trump and 42 percent for Clinton.