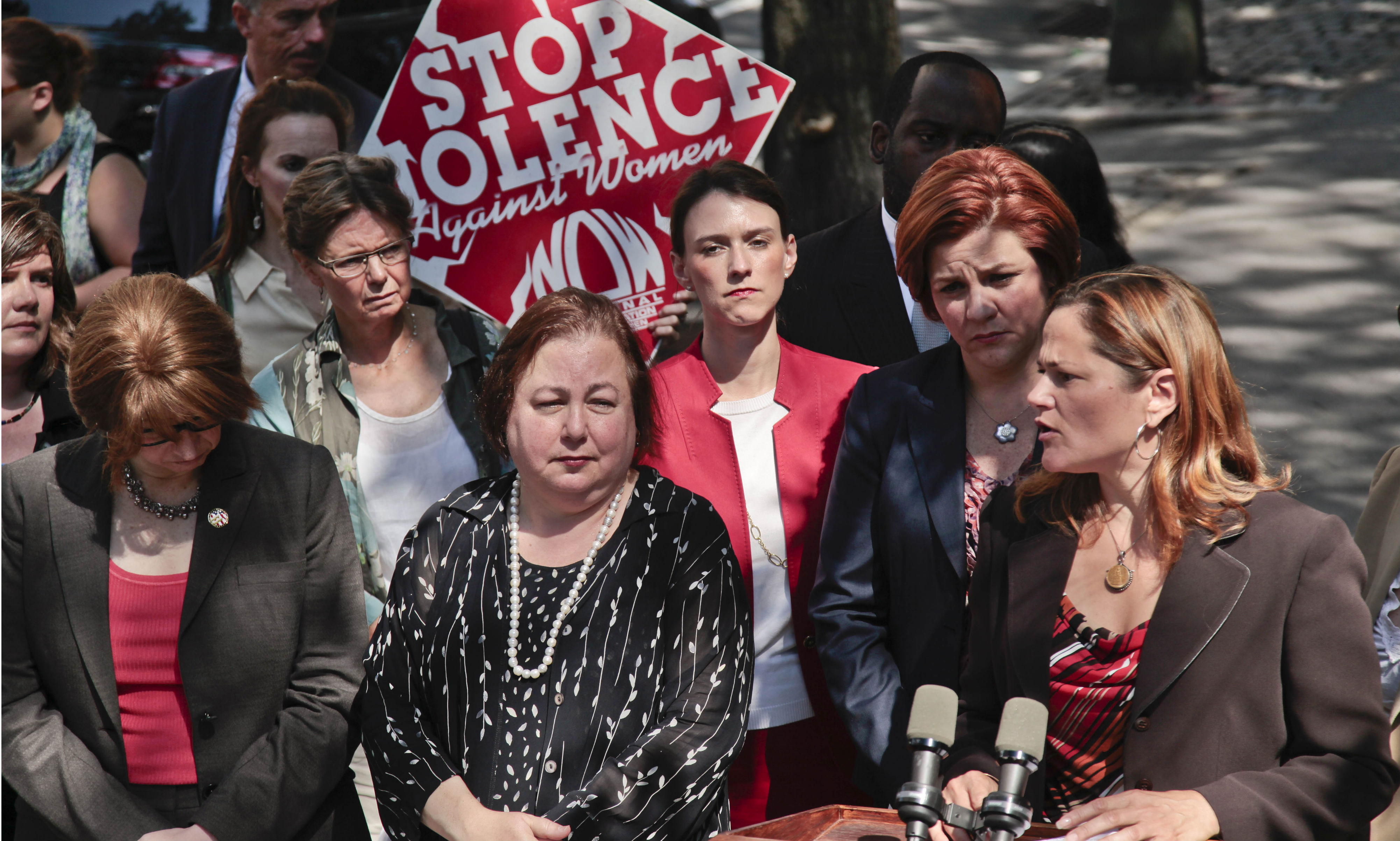 City Council member Melissa Mark-Viverito, right, speaks at a news conference as advocates in the fight against violence on women. (AP Photo)

The most important election that the voters don’t get to vote on—the selection of New York’s next City Council Speaker—is the consuming buzz in New York’s political world on Wednesday.

Politicker reported yesterday that Mayor-elect Bill de Blasio has been making calls to returning and incoming councilmembers lobbying for Manhattan-Bronx Councilwoman Melissa Mark-Viverito, who has the support of the Progressive Caucus—which, according to the same report, claimed to have the 26 votes necessary to elect her head of the fifty-one-member council.

Politicker also quoted unnamed insiders saying that de Blasio’s overt advocacy for Mark-Viverito had infuriated some of the county Democratic chairmen, who have traditionally held sway over the picks for Council leadership.

City & State reported today that those county chairman have coalesced around Manhattan Councilmember Daniel Garodnick to be the next speaker—and that they claim to have enough votes.

To most members of my huge national audience, and even among some of my millions or dozens of readers in the city, all this gamesmanship over a legislative post may seem like a distraction (if a welcome one; how else are we to pass the time before we can get to Anchorman 2?).

But it’s vital to de Blasio’s agenda that he get a speaker he can work with. He saw evidence of this during his own time in the Council. In de Blasio’s first term, from 2002 to 2005, Speaker Gifford Miller often resisted Bloomberg, irritating the easily irritated billionaire. In de Blasio’s second Council stint, from 2006 to 2009, the more accommodating Quinn made life easier for the mayor—no more so than when Bloomberg asked to overturn the term limits law.

While New York has a strong mayor system, the Council has a huge role to play on the budget and decisions about zoning and other land-use policies. The speaker has the ability to tightly control that role, by naming committee chairs, deciding which bills get hearings and which can come up for votes and apportioning discretionary funding for the members to spend, with favored colleagues getting lots of dough and squeaky wheels getting little. In fact, one of the top items on the Progressive Caucus wish list is to reform the Council rules and reduce the power of the speaker—but that probably won’t happen unless one of their own gets the chair.

Because the speaker can dish out goodies and discipline and set the agenda, almost all Council measures pass unanimously. Even notable gadflies vote with the speaker 90 percent of the time, simply because the speaker rarely brings a bill to a vote if passage is not assured. What’s more, the last three speakers have run, albeit unsuccessfully, for mayor, so whoever gets the post is by default the person best positioned to succeed or even challenge de Blasio.

Everyone thought de Blasio’s big problem was going to be Albany, because the state legislature has to approve changes to the income tax like the one de Blasio wants to use to fund his signature initiative, which couples early childhood education and middle-school after-school programs. Republican control of the state Senate is an obstacle to that idea, and the cagey governor-who-might-run-for-president may not be an ally either.

All that gets much more complicated if the city’s own legislature hamstrings the new mayor. Plus, it kinda looks bad if de Blasio loses his first big fight. But be careful about overstating the scope of it.

Mark-Viverito, who represents a district including East Harlem and parts of the South Bronx, is generally well regarded by the left in the city, making headlines last year for clashing with Ray Kelly over aggressive police tactics. Her liberal credentials are such that some observers thought de Blasio would prefer someone more centrist as his partner across City Hall. When I recently asked a room of anti-poverty advocates what they thought of her front-runner status, they were all smiles and thumbs up.

Garodnick is no right-winger (those are hard to find on the City Council), though he is not a member of the Progressive Caucus. His district includes a long slab of the Upper East Side—the only large section of Manhattan that chose Republican Joe Lhota over de Blasio in November. According to Politicker, he’s passed more legislation than his rivals for the council.

Just because the mayor-elect doesn’t get his top pick doesn’t mean his mayoralty is over. There are battles and there are wars. Eight years ago Christine Quinn famously outmaneuvered Bill de Blasio for the City Council speakership. That seemed to work out alright for him.