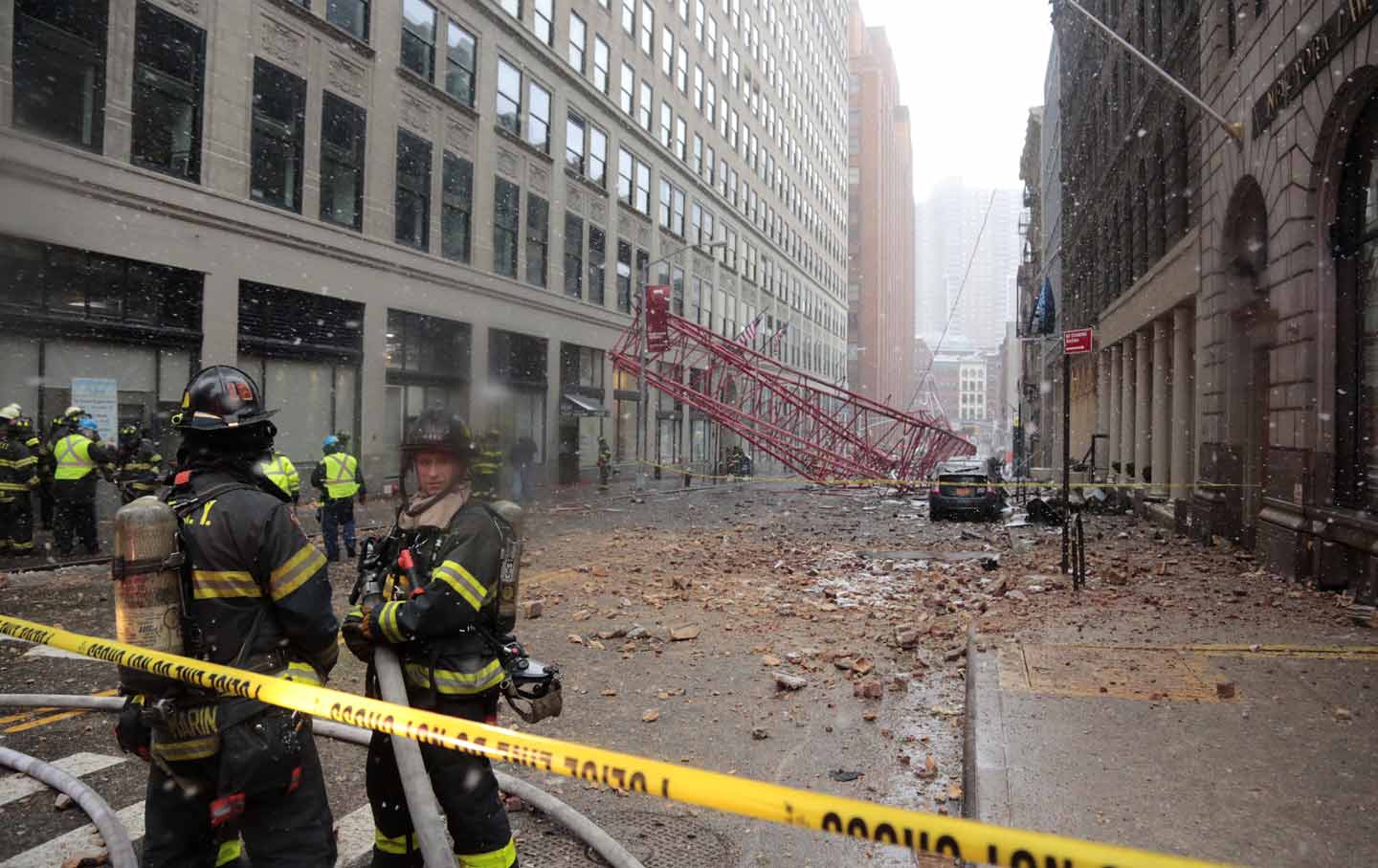 A collapsed crane lies on the street on February 5, 2016, in the TriBeCa neighborhood of New York City. (AP Photo / Bebeto Matthews)

New York’s skyline keeps soaring upward, but every once in a while, gravity catches up. The latest lethal crane collapse in downtown Manhattan was another sad marker of how the real-estate industry’s breakneck ascent can reach devastating extremes.

Following the collapse, which left one dead and three injured, Mayor Bill de Blasio’s office announced that the tragedy was under investigation, but noted that the company had evidently followed procedures for properly securing the crane, and that it had been several years since such a deadly crane incident.

According to Stringer, a November 2014 audit showed the mayor’s office had yet to implement many of the 65 recommended reforms that came out of a safety review initiated in 2008 under Mayor Michael Bloomberg. The mayor’s office countered that currently about 30 of 65 recommendations had been implemented and another 23 were pending.

But the optics of the collapsed crane have spurred action, at least for the moment. The mayor announced several new construction-safety measures, including requiring more precautionary measures for workdays with heavy winds, deploying safety personnel to crane sites, and hiking fines for failing to secure cranes appropriately, from $4,800 to $10,000. According to Construction Dive, the city will also initiate a “safety sweep” of construction sites, as part of a larger oversight plan for high-risk worksites.

Stringer’s office stands by its criticisms of construction safety oversight, citing what it sees as “an agency in disarray, failing to keep up with 21st-century safety and technology.” Recent reforms notwithstanding, in a follow-up e-mail, Stringer’s office stated, “Falling cranes cause falling confidence in how well people feel they are being protected”

In the past, the comptroller has cited a potential inherent conflict of interest in the DOB’s mission, as its mandate involves both facilitating development projects, on the one hand, and overseeing worksite safety, on the other.

For everyday New Yorkers, the occasional freak crane collapse highlights a general sense of vulnerability shared by residents and workers alike: The real threat that looms is not just towering machinery but an industry rife with perverse incentives.

Following the crane collapse, Charlene Obernauer, executive director of New York Committee for Occupational Safety and Health (NYCOSH) stated, “The increasing number of workers and pedestrians killed in construction incidents in our city—from small to large projects—shows us that we need to think bigger and act bolder to protect all New Yorkers.”

But any new regulations on crane safety may face even bigger and bolder resistance from real-estate elites. Days after de Blasio announced a temporary freeze on crane use at construction sites, builders assailed the move as government overreach, warning that curbing construction work could potentially throw many pending projects off course.

Your chances of getting killed by a random falling crane are slim, but every day construction workers teeter on the edge of an economic precipice, earning poverty wages and routinely being cheated out of pay.

NYCOSH’s analysis of 2015 construction data found that the construction industry overall accounted for a fifth of occupational deaths in New York, but only 4 percent of total employment. Across New York State, Latinos, and immigrants faced the greatest risks, as did non-union workers.

Similarly, a New York Times investigation last November showed a dramatic spike in injury and fatality rates at construction sites that coincided with the city’s building boom, noting that “The rise in deaths and injuries—mostly among undocumented immigrant laborers—far exceeds the rate of new construction over the same period.”

Advocates see these fatal injuries as a symptom of business-friendly regulations and a disempowered workforce. Between 2010 and 2012, NYCOSH reports, two-thirds of the inspections conducted by the federal Occupational Safety and Health Administration “resulted in citations for “serious” safety violations.” The City not only permitted these unsafe contractors to operate in the city, it actively did business with them: “89 percent of contractors working on affordable housing projects have OSHA violations.”

Employers that exploit the poor to build housing for the poor may factor into the rollout of de Blasio’s newly announced affordable housing plan, which will strive to expand low- and moderate-income housing stock by mandating developers to offer “affordable” units (though the criteria for “affordability” is often criticized for unrealistically high rates compared to local income levels).

ALIGN NY, a local advocacy coalition, traced the corporate ties between the lack of equitable, affordable housing development and abusive contractors. Behind many of the city’s supposedly public-minded housing development is the trade group New York State Association for Affordable Housing (NYSAFAH). ALIGN contends that “NYSAFAH developers rely heavily on wage theft, the exploitation of construction workers, and unsafe construction methods to build housing that isn’t even affordable to most residents.” The group’s analysis shows that in areas set for rezoning, so-called “affordable units,” priced in proportion to “area median income,” would “actually exclude the vast majority of low-income residents in neighborhoods like East New York and the South Bronx.”

ALIGN Campaign Director Maritza Silva-Farrell tells The Nation via e-mail, “NYSAFAH developers are known to build majority non-union, and hire unscrupulous subcontractors who have been involved with wage theft, unsafe working conditions,” and other violations. Corporations that see residents as units of profit are likely to see labor as a cost to be cut. “We can’t build affordable housing without thinking about the construction jobs that are created,” Silva-Farrell adds. “These are two sides of the same coin.”

This is where the hazards of working and living in the city intersect: Between the freak accidents and the unpaid back wages, before the ribbon is cut, an untold number of displaced families and damaged workers pave a skewed path to “development.”

Update: NYSFAH has responded to ALIGN’s report in a statement through their public relations firm, stating that their critique is “deeply flawed” and that “NYSAFAH remains committed to safety and fairness for construction workers as part of our mission to provide more affordable housing for low- and middle-income New Yorkers.”