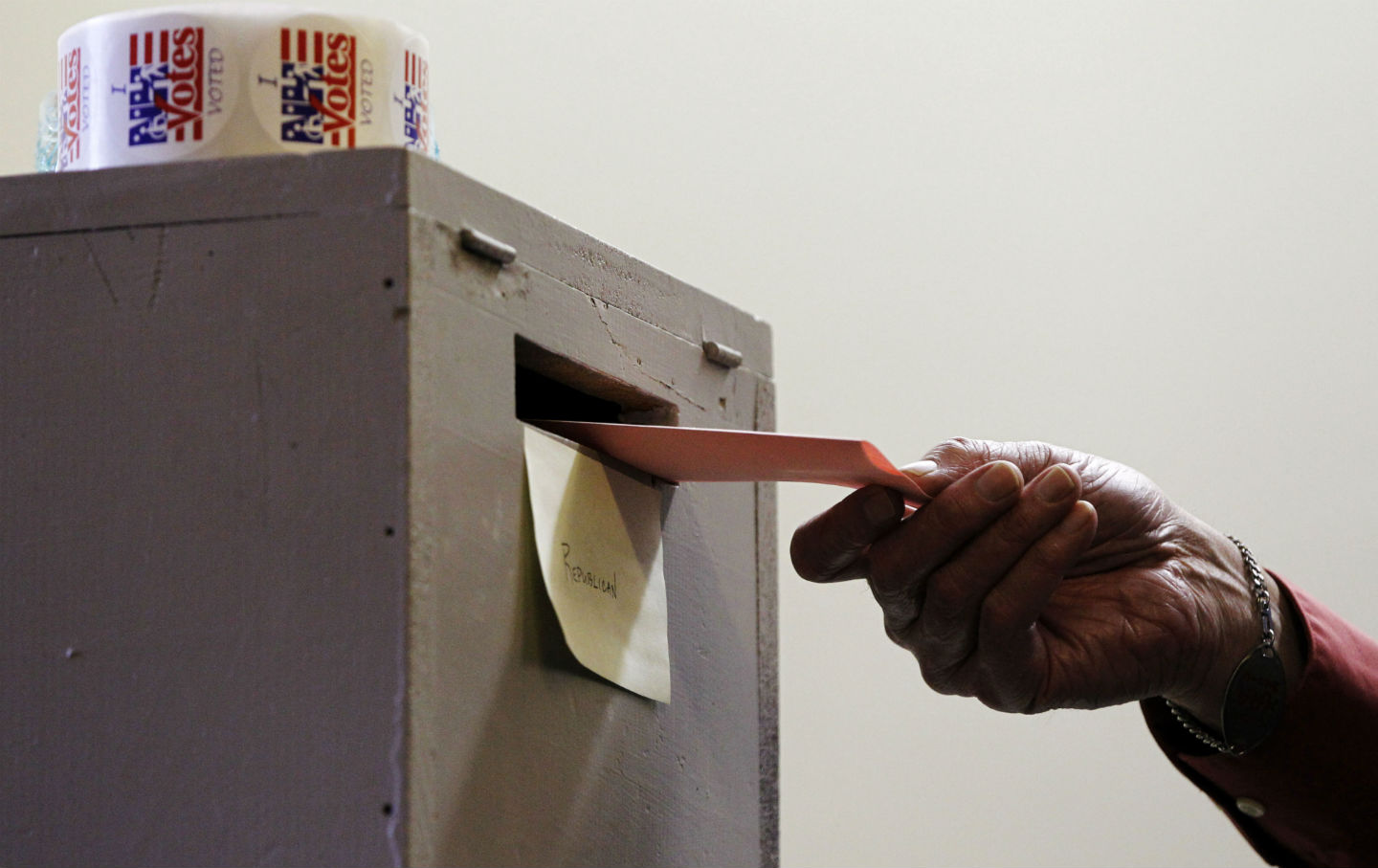 A moderator slides a voter’s ballot into a box at the Woodstock Town Hall in New Hampshire. (AP Photo/Matt Rourke)

Ed Blum, who brought the case that led to the gutting of the Voting Rights Act in 2013, is now going after the historic principle of “one person, one vote.” The Supreme Court decided on Tuesday to hear Evenwel v. Abbott, Blum’s latest case, which challenges the drawing of state Senate districts in Texas. The obscure case could have major ramifications for political representation.

Blum first began attacking the Voting Rights Act after losing a Houston congressional race to a black Democrat in 1992 and founded the Project on Fair Representation in 2005 to challenge the constitutionality of the VRA. The Evenwel case doesn’t deal directly with the VRA but on how districts should be calculated. Since the Supreme Court’s 1964 Reynolds v. Sims decision, districts have been drawn based on the total population of an area. Blum instead wants lines to be drawn based only on eligible voters—excluding children, inmates, non-citizens, etc. from counting toward representation.

If that happened, legislative districts would become older, whiter, more rural, and more conservative, rather than younger, more diverse, more urban, and more liberal. “It would be a power shift almost perfectly calibrated to benefit the Republican party,” explains University of Texas law professor Joey Fishkin. “The losers would be urban areas with lots of children and lots of racially diverse immigrants. The winners would be older, whiter, more suburban, and rural areas. It would be a power shift on a scale American redistricting law has not seen since the 1960s. While not nearly as dramatic as the original reapportionment revolution, it would require every map in every state to be redrawn, with the same general pattern of winners and losers.”

Demographically, the gap between Republicans and Democrats is wider than it has ever been. “House Republicans are still 87 percent white male, compared to 43 percent of House Democrats—the widest gap we’ve ever seen,” explains Dave Wasserman, House editor of the Cook Political Report. “In terms of composition of districts, the median GOP district is 76% white, while the median Dem district is 49% white—again, the widest gap we’ve ever seen. Overall, the median House district is 68% white, compared to 63% for the nation as a whole.”

This representation gap explains why Republican officials are pushing new voting restrictions like voter ID laws and cuts to early voting, which disproportionately impact minority voters and seek to make the electorate smaller and whiter. A victory for Blum’s side in Evenwel would make districts across the country even less representative of the country as a whole.

Blum claims to be fighting for race neutrality but he’s often done the bidding of the most powerful figures in the conservative movement and Republican Party. As I reported in 2013:

His Project on Fair Representation is exclusively funded by Donors Trust, a consortium of conservative funders that might be the most influential organization you’ve never heard of. Donors Trust doled out $22 million to a Who’s Who of influential conservative groups in 2010, including the American Legislative Exchange Council (ALEC), which drafted mock voter ID laws and a raft of controversial state-based legislation; the Americans for Prosperity Foundation, the Koch brothers’ main public policy arm…Donors Trust has received seven-figure donations from virtually every top conservative donor, including $5.2 million since 2005 from Charles Koch’s Knowledge and Progress Fund. (The structure of Donors Trust allows wealthy conservative donors like Koch to disguise much of their giving.)

From 2006 to 2011, Blum received $1.2 million from Donors Trust, which allowed him to retain the services of Wiley Rein, the firm that unsuccessfully defended Ohio’s and Florida’s attempts to restrict early voting in federal court last year. As a “special program fund” of the tax-exempt Donors Trust, Blum’s group does not have to disclose which funders of Donors Trust are giving him money, but he has identified two of them: the Bradley Foundation and the Searle Freedom Trust. The Wisconsin-based Bradley Foundation paid for billboards in minority communities in Milwaukee during the 2010 election with the ominous message “Voter Fraud Is a Felony!”, which voting rights groups denounced as voter suppression. Both Bradley and Searle have given six-figure donations to ALEC in recent years, and Bradley funded a think tank in Wisconsin, the MacIver Institute, that hyped discredited claims of voter fraud to justify the state’s voter ID law.

The challenge in Evenwel isn’t so different from the gutting of the VRA or new laws restricting voting rights. The goal is to limit representation, make it harder for some to participate in the political process and to widen the gap between the haves and have-nots.

CORRECTION: Blum says, “The Project on Fair Representation hasn’t been affiliated with Donors Trust for nearly 6 months; we are now a 501 (c) (3) so our donors will be disclosed according to the regulations that apply to all public charities.”