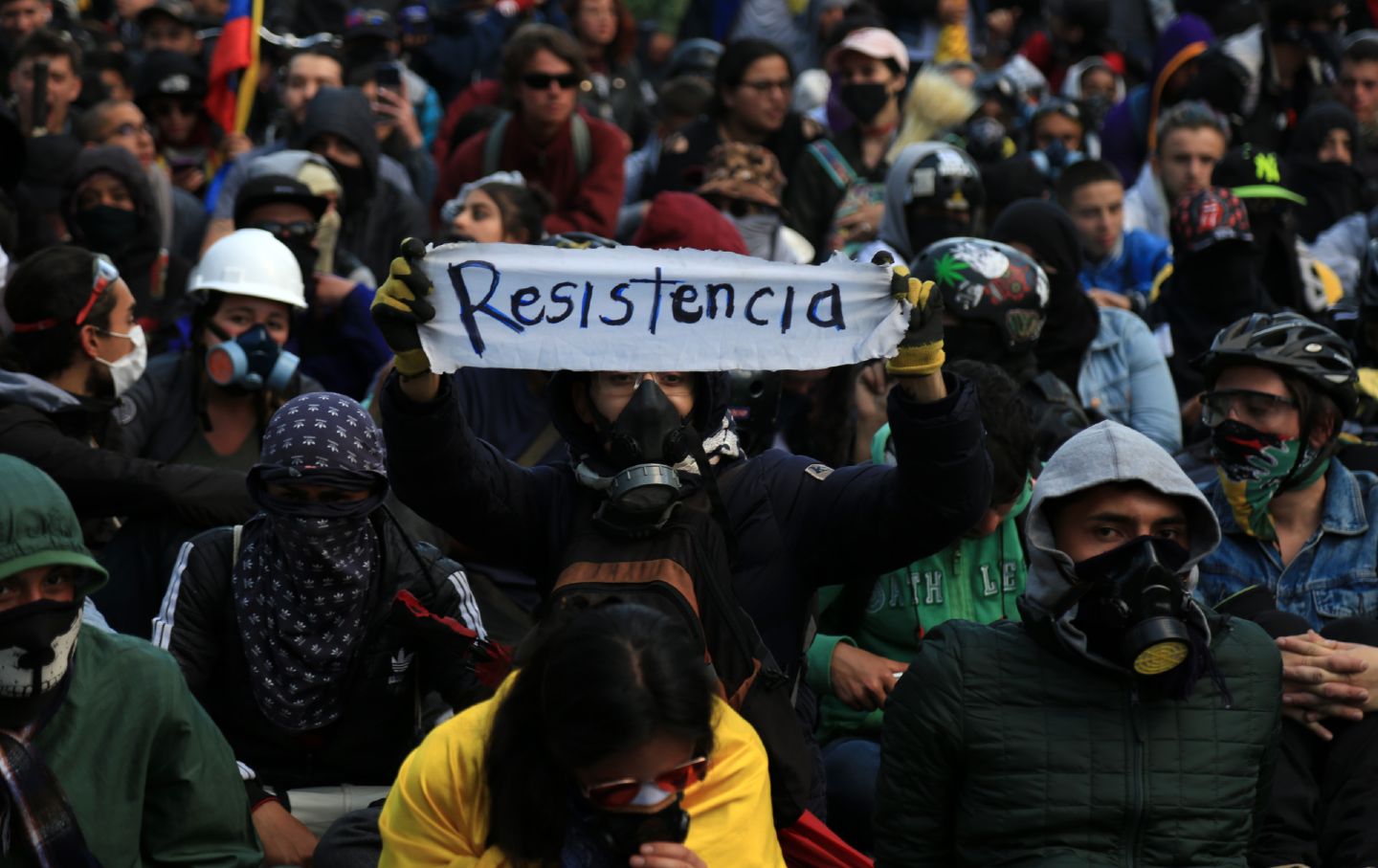 On the night of December 4, CNN aired an interview with two architects of modern Colombian history in a segment notable mostly because of its tranquility amid the country’s explosive political situation. Hours earlier, tens of thousands had marched across the country to protest against conservative president Iván Duque’s administration in what was the third major march in under two weeks, and the latest in a series of strikes that had forced the government into negotiations over broad social reforms.

At the CNN studio, away from the turmoil, Colombian ex-president Juan Manuel Santos sat in a gray suit, chatting casually alongside Rodrigo Londoño, the former commander of the Marxist FARC guerrilla army. The two had been mortal enemies until three years earlier, when they signed a treaty that effectively ended half a century of war. Now, they were perched on the same couch conversing with Mexican journalist Carmen Aristegui about the peace deal. Apart from covering the disarmament and reintegration of guerrilla soldiers into society, Santos explained, the 2016 agreement also committed the state to a host of social initiatives like agrarian reform and a crop substitution plan to reduce drug production. Most significantly, it had liberated the country from the grips of war. “The protests we’re seeing today,” Santos said, “have to do with the fact that people feel much freer than they did before.”

If the interview went largely unnoticed in Colombia, it was because what Santos was articulating was already widely understood. Although the agreement may not have necessarily changed daily life for most Colombians—by the time of its conclusion, the war had almost exclusively been contained to rural areas—it certainly helped expand the country’s political possibilities. The news cycles have moved away from their incessant coverage of the war with the FARC, and while the peace deal remains a significant issue, it no longer carries the same overwhelming political weight. After all, inequality levels across the country are among the highest in Latin America. The unemployment rate is rising, too, nearly reaching 10 percent in October. Elsewhere, social leaders and indigenous populations are being murdered with impunity for confronting drug trafficking and illegal mining operations on their land.

There’s been a rising level of discontent, especially among the middle class in cities like Bogotá and Medellín, where real estate prices are spiking but wages—if you can find a job—are stagnant. For decades, many Colombians have been disappointed by one conservative government after another, but with an eye toward the ongoing demonstrations throughout the world, and especially in Chile—where a transit fare hike had provoked large-scale protests over austerity measures and neoliberal reforms—their patience was wearing thin. Within months, the unrest that began with Puerto Rico’s uprising over government corruption had spread across Latin America. Hondurans took to their streets demanding the resignation of a president with ties to drug trafficking, Ecuadoreans revolted over slashed fuel subsidies, and Bolivia erupted after a contested, potentially fraudulent election, and then again after its first indigenous president was pushed out in a coup.

Then, in early November, Colombia finally reached a tipping point after reports surfaced of government plans to scrap the public pension system and lower the minimum wage for workers under 28 years old. Within days, the Central Unitaria de Trabajadores, or CUT, the country’s largest labor union, had called for a national strike to take place on November 21. Word spread quickly and enthusiastically. Almost immediately, Duque and his administration backtracked, and claimed that news about the reforms was false, but the damage had already been done. “After we’ve called for a national strike against these reforms, now the government is saying that no, it’s all a lie,” Jénnifer Pedraza, one of the student leaders, said on national television.

Now entering its fourth week, the strike has brought together hundreds of thousands, perhaps millions of Colombians, including labor activists, environmentalists, feminists, teachers, students, Afro-Colombian, and indigenous groups—even soccer ultras. Every major city—from Bogotá and Medellin and Cali to Barranquilla along the Caribbean coast and Pasto in the southern Andean foothills—has mobilized, though the bulk of the most recent demonstrations has been concentrated in the capital. The protesters, who are primarily led by unionists and student groups, have articulated 13 broad demands, from anti-corruption measures and a halt to the rumored economic reforms to the implementation of the 2016 peace deal.

Beyond its size and scope, perhaps what’s most remarkable about the marches is that they are happening at all, given the country’s thin history of civil unrest. The current protests are the largest in recent memory—and how could they not be, considering that Colombia was one of the only South American countries to sit idle during the revolts following Argentina’s economic collapse, Bolivia’s water wars, and other uprisings that ushered in many of Latin America’s “pink tide” governments in the early 2000s?

For decades, Colombian politics had instead been dominated by news of kidnappings, car bombs, massacres, military operations against this cartel or that guerrilla group, and so on. Across Latin America, as peace accords were signed and guerrillas put down their weapons, Colombia moved in the opposite direction. By the turn of the century, the cocaine boom had eventually made war profitable and sustainable for everyone involved: After the emergence of the cartels, the FARC and right-wing paramilitaries also dipped into the drug trade to finance themselves and expand their ranks.

Corrupt politicians were taking a cut, too. One of them, Álvaro Uribe Vélez, a staunch anticommunist who likely launched his political career with cartel money, was elected president in 2002 after the previous government failed to negotiate peace with a resurgent FARC. His presidency ushered in one of the bloodiest eras of Colombian history. During his tenure, the army formed a tacit alliance with paramilitary death squads to hunt down the FARC, indiscriminate killings became commonplace, and civilians were slaughtered by the state and presented as dead guerrilla soldiers. By 2008, Uribe had even risked sparking a regional conflict after the military launched an operation into Ecuadorean territory, heightening tensions with then-President Rafael Correa.

Despite killing off a fraction of the country, Uribe’s scorched earth campaign managed to weaken the FARC enough to cement his status among voters as a strong man and quickly turned him into a political juggernaut. The armed conflict soon became a convenient tool for sowing fear and stoking nationalism. A Colombian-style McCarthyism took hold, and politicians advocating for social reforms or military restraint were cast off as guerrilla sympathizers and effectively silenced. This wasn’t necessarily a new phenomenon—thousands of demobilized guerrillas and leftist politicians had been mauled by armed paramilitary groups in the preceding decades—but under Uribe, it had become state policy.

That’s all changing now. Attitudes have shifted thanks in large part to the peace agreement. Since he was elected president, Uribe and his surrogates have won every presidential election but one (and in 2016, his political weight was enough to temporarily sink Santos’s peace agreement in a countrywide referendum). Without a guerrilla bogeyman to use as a convenient scapegoat, their grip on power is loosening. In 2018, Duque’s election also saw a former M19 guerrilla, Gustavo Petro, reach the runoff—the first leftist candidate in modern Colombian history to do so. And in the past year alone, progressive politicians across the country have found their footing, and have recently gained ground in municipal elections. Most notably, Claudia Lopez, an anti-corruption reformist who ran for president in 2018, was elected mayor of Bogotá.

President Duque and Uribe’s cabal of conservatives now find themselves in the midst of a political nightmare. Uribe himself has become increasingly exposed, as members of his inner circle have been arrested in recent years on corruption charges and links to death squads, and the details of his own connections to Colombia’s criminal underworld are just beginning to surface. On top of that, their political opponents are more unencumbered than ever, and, for the first time in decades, the entire country has taken to the streets.

Keeping with Uribe’s brand of governance, the state’s response to the protests has been to deflect and repress. When the strikes did begin, the government desperately tried to discredit them. “There are many voices calling to burn down society and inciting violence based on lies,” Duque said. False rumors circulated claiming that strikers were funded by guerrilla groups or by the Venezuelan government, and a conservative ex-president even suggested it was all part of a coup plot by Santos.

The misinformation became a pretext to sow confusion, stir xenophobia, and lock down the country. Ahead of the first strike in November, Colombia’s migration office closed off all national borders, and later deported dozens of Venezuelans whom it accused of fomenting public unrest. Riot police were deployed on largely peaceful demonstrations, and before long, videos were proliferating on social media of police officers beating protesters, smashing windows, and, in one notable case, shooting an unarmed 18-year-old student in the head after he redirected a tear gas canister to an empty street. His death two days later reinvigorated the strikes.

Despite having lost steam in recent days, the ongoing marches have been so massive and loud that they’ve managed to coerce Duque into acknowledging the protesters’ demands. Last week, the government reluctantly signaled that it was open to negotiating, but nothing has come of it yet. “There is no will for dialogue or negotiation on behalf of the government,” the president of the CUT and a member of the national strike’s negotiating committee recently announced. With Duque’s approval ratings on the floor and two years before new elections, the only option on the table for Colombians is to continue pouring into the streets, banging pots and pans into the holidays and the new year until the president starts to listen in earnest. Now, at the very least, the country seems ready for it.