November 2016 should have marked a watershed moment in Colombia’s bloody history, as it is the date when the Colombian government signed a final peace accord with the FARC guerrilla group after more than half a century of war. And yet, since that date Colombia has become one of the most dangerous places in the world to be a human-rights worker. Between November 2016 and April 2019, 566 community leaders and human-rights defenders were murdered.

Unsurprisingly, the Colombian government insists that violence has abated by pointing to reductions in the homicide and kidnapping rates and by minimizing the magnitude and systematic nature of the assassinations. But many Afro-Colombian activists differ. For them, the targeted killings of men and women working to protect their communities from the entry and expansion of illicit activities, extractive industries, and new armed groups in their territories is unquestionably systematic. This is why Erlendey Cuero—vice president of the National Association of Displaced Afro-Colombians (AFRODES) and herself a target of multiple death threats—distributed a special leaflet to the attendees of Colombia’s 2018 UN Universal Periodic Review, a mechanism that was established to review human-rights performance of member states (UN-UPR). The leaflet, bearing the logo of several Afro-Colombian organizations, displayed the photos of 12 Afro-Colombian leaders assassinated since 2016 and read, “Peace has not yet arrived in our territories.”

Francia Márquez, the 37-year-old recipient of the 2018 Goldman Environmental Prize, which honors grassroots environmental activists worldwide, knows this systematic violence intimately. Faced with state abandonment and political marginalization, rural Afro-descendant communities in her region of northern Cauca have been practicing subsistence agriculture and artisanal gold mining for centuries. While economically precarious, this livelihood allowed local communities to maintain autonomous ways of life, with little protection from the state but also with minimal intervention from national development projects and a certain degree of insulation from Colombia’s armed conflict. For Francia, this changed abruptly in 2009, when the Colombian government granted outside individuals and multinational corporations titles to undertake large-scale gold mining on her community’s territories, thereby threatening the inhabitants with imminent eviction.

Over the next decade, Márquez’s steadfast struggle to defend the integrity of the rivers and soil as well as the dignity of her people launched her into the international limelight but also made her a target of concerted attacks. Along with the other members of the local Afro-Colombian Community Council, she began receiving death threats when they organized to expel dredgers who continued to illegally extract gold even after the mining title had been legally revoked in 2010.

Once Again, the Right Wing Wins in Colombia, Amid Divisions on the Left

Before Her Murder, Berta Cáceres Singled Out Hillary Clinton for Criticism

But even as the relentless threats against her life forced her to leave her community in 2014, Márquez continued her work for the defense of life—for an autonomous black life as she knew it, and for the nonhuman life on which her community’s livelihood depended. She met with activists and politicians abroad to build networks of black diasporic solidarity; she went to law school and became fluent in the tricky language of legal rights; she ran for Congress; she organized local resistance to armed groups; and in 2014 she led a women’s march from northern Cauca to the interior ministry in Bogotá. This 300-plus-mile march, which quickly grew from 15 to 80 women, was an urgent response to the daily violence and death inflicted on their communities by the illegal presence of outside miners and armed groups pressuring locals to abandon their traditional practices. Most dramatically, in April of that same year, dozens of miners had been buried under a landslide as they frantically collected gold in a makeshift and illegal mine.

Márquez—who is now escorted everywhere by two bodyguards in an armed vehicle provided by the government—has learned to carry on under the ever-looming threat of premature death. But sometimes the pressure becomes nearly unbearable, and sometimes the threat is almost realized. This past May 4, while she and a group of fellow Afro-Colombian activists prepared their demands that the government move forward with implementation of the 2016 peace accords, three armed men launched a grenade and opened fire on their meeting, wounding two bodyguards. Two days later, several of those who had been present were warned via text message that “what happened on Saturday [May 4] was only the beginning of the extermination of all.” 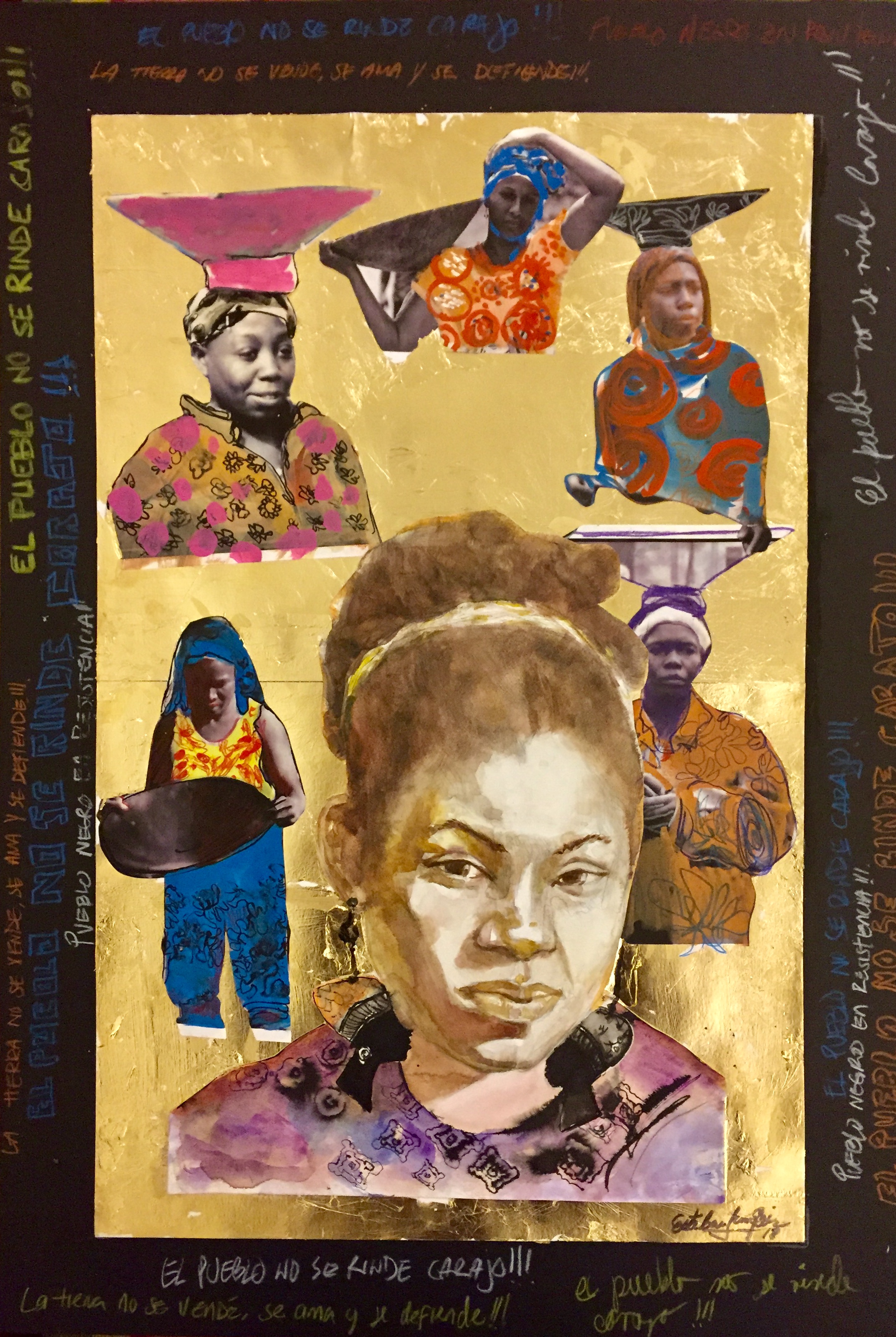 Extreme acts of political violence such as the unrelenting homicide of human-rights workers like Márquez are all too common in Colombia. The violence is both so quotidian and so grotesque that Colombia is often held up as an exceptional example, a place uniquely marked by histories and cultures of violence, or, as anthropologist Michael Taussig famously dubbed the nearby town of Puerto Tejada, “a lawless land.” It is tempting to locate regular, gruesome, and untimely death in the realm of the aberrant. Doing so allows us to imagine that the world has run amok and that it can neatly be restored to its wholesome state. But the kind of structural, daily violence faced by Márquez and the people of her community—in the form of state abandonment, political marginalization, and structural racism—is anything but exceptional. And the imminence of death with which Márquez lives is but another haunting example of the violence inflicted against women, against black people, and against those who dare speak out against capitalism’s most savage expressions—and not only in Colombia. Perhaps Colombia is not so much an outlier as a particularly visible node in a global phenomenon that silences dissident voices while naturalizing the systematic violence used to do so. Perhaps we are all living in lawless times.

Reflecting on the vicissitudes of her political trajectory during a recent interview with Semana Rural, Márquez stated that “staying alive is victory.” Just staying alive. When we realize that she walks in the path of Berta Cáceres, who was assassinated in her home after defending indigenous lands from the largest dam builder in the world and who received the Goldman Prize just three years before Márquez, the phrase rings eerily true. And if we pay attention, the connections between her and other women like her begin to proliferate. Remember Marielle Franco, the Rio de Janeiro city council member who was brutally murdered for speaking out against the systematic racist violence of the state.

Just a few days before the attack on Márquez a group of African-American women leaders gathered in Washington, DC, to defend Minnesota congresswoman Ilhan Omar from the vitriolic attacks of the right wing, including numerous death threats she has received since taking office. The attacks against her are often explained as resulting from her bold statements on controversial issues. And while this may be part of the story, Omar herself has identified an intrinsic animosity against her that is founded on discomfort with the fact that she is an immigrant, a Muslim, and a black woman “who shows up in Congress thinking she is equal.” Like Omar, Márquez’s voice upsets the status quo, and also like Omar, Márquez is unequivocal in her determination to carry on. As she herself stated in a powerful speech delivered to government representatives at the culmination of the women’s march: “We will not be moved” (permaneceremos).

In attacks like those against Márquez, Cáceres, Franco, and Omar, the stakes are high. As Angela Davis noted in her public defense of Ilhan Omar, any attack against her as an individual is an attack “designed to dissuade us all from speaking out.” Echoing the same spirit of solidarity, founded on an understanding that the attacks against these fierce women who speak up against injustice are interconnected, Davis also condemned the attacks against Márquez, stating that peace in Colombia will be unattainable “as long as Afro-Colombian leaders are being threatened, attacked, assassinated and imprisoned.” If this is true for Colombia, this is true everywhere, so it behooves us all to say, hands off Francia Márquez.