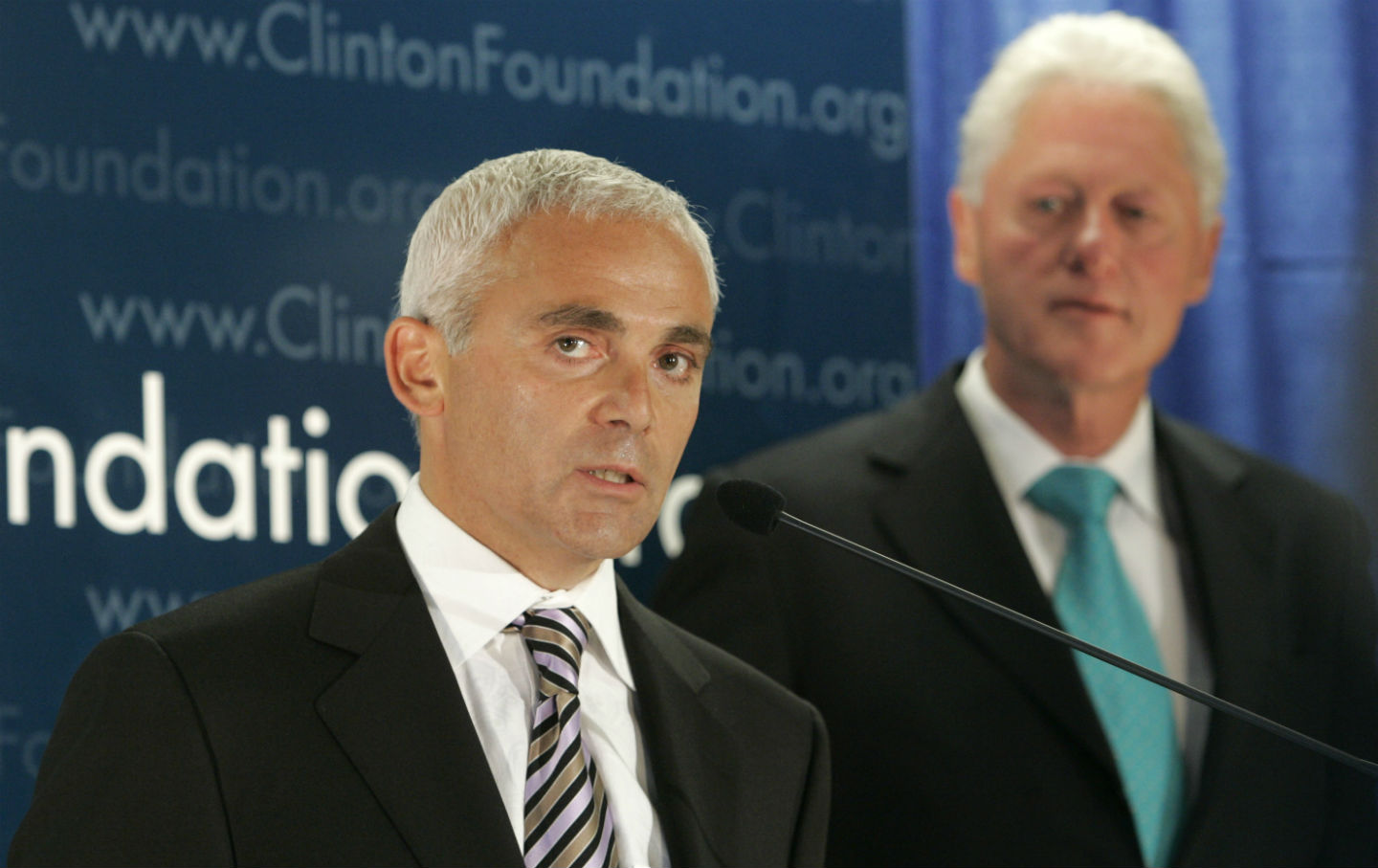 Frank Giustra speaks as Bill Clinton looks on during a news conference in New York in 2007. (AP Photo/Frank Franklin II)

The phrase “Clinton rules” has two very distinct meanings. Bill and Hillary Clinton’s enemies use it to mean that the couple flout rules that apply to everyone else. (See, for example, the recent anti-Clinton Wall Street Journal editorial “The Clinton Rules.”) In the early years of the blogosphere, however, liberals used “Clinton rules” as shorthand for the way journalists regularly abandoned ordinary standards of evidence to breathlessly pursue Clinton pseudo-scandals, often cooked up by right-wing operatives. As the Daily Howler wrote in 2007, “Under ‘the Clinton rules of journalism,’ you can say any goddamn thing you want—as long as you say it about the Clintons.”

Both versions of ‘Clinton rules’ describe real phenomena, and with any given Clinton story, it can be extremely difficult to figure out which Clinton rules are at work. Things are easier if you start off with a strong stance on the couple, always assuming the worst of either the Clintons or of anyone who criticizes them. But if you believe, as I do, that the Clintons have been demonized and persecuted to a preposterous degree and that they have cut ethical corners, if you delight in the idea of a female president but dread the return of the Clinton circus, it’s not easy to sort out who the real wrongdoers are in each new Clinton investigation. You find yourself plunged into rabbit holes, arguing about minutia, wishing for some sort of ideological heuristic to make sense of it all.

Take today’s New York Times investigation, “Cash Flowed to Clinton Foundation as Russians Pressed for Control of Uranium Company.” The story implies—but does not clearly allege—that money funneled to the Clinton Foundation greased the wheels for a deal that left Rosatom, the Russian atomic energy agency, in charge of 20 percent of American uranium reserves. As secretary of state, Hillary Clinton was part of a committee of cabinet officials that had the power to accept or reject the deal.

The origin of the piece is suspicious. On Monday, Times reporter Amy Chozick wrote about a forthcoming book, Clinton Cash: The Untold Story of How and Why Foreign Governments and Businesses Helped Make Bill and Hillary Rich, by the right-winger Peter Schweizer. (Among Schweizer’s other books is Makers and Takers: Why conservatives work harder, feel happier, have closer families, take fewer drugs, give more generously, value honesty more, are less materialistic and envious, whine less…and even hug their children more than liberals.) According to Chozick, Clinton Cash is potentially more threatening to the Clintons than other right-wing hit jobs, “both because of its focused reporting and because major news organizations including The Times, The Washington Post and Fox News have exclusive agreements with the author to pursue the story lines found in the book.”

This last line caught many up short. Why on earth would The New York Times enter into an “exclusive agreement” with a right-wing hack like Schweizer? After all, there’s nothing to stop the paper from following up on Schweizer’s reporting on its own. Why make a deal with him? What did it entail? Chozick didn’t say, and a piece today by Margaret Sullivan, the paper’s public editor, only clarified things a bit. “Any agreement limiting journalistic inquiry is unacceptable; the wording in the original story certainly suggested that,” wrote Sullivan. “I believe…that such a thing didn’t happen here; that, rather, The Times merely pursued the angle it was most interested in, with no restrictions. But I still don’t like the way it looked.” Indeed, it looks terrible—a clear example of the second sort of Clinton rules.

The uranium piece is the first fruit of this exclusive agreement, which is reason to approach it skeptically. Yet when you read it, it appears pretty damning. Maybe, you might start thinking, the Clintons really have bent the rules in shocking ways.

The story begins in 2005 in Kazakhstan, where the mining magnate Frank Giustra, a generous Clinton donor, is negotiating a deal for stakes in three mines controlled by the state-run uranium agency. There is a strong suggestion that Bill Clinton made the deal happen:

The two men had flown aboard Mr. Giustra’s private jet to Almaty, Kazakhstan, where they dined with the authoritarian president, Nursultan A. Nazarbayev. Mr. Clinton handed the Kazakh president a propaganda coup when he expressed support for Mr. Nazarbayev’s bid to head an international elections monitoring group, undercutting American foreign policy and criticism of Kazakhstan’s poor human rights record by, among others, his wife, then a senator. Within days of the visit, Mr. Giustra’s fledgling company, UrAsia Energy Ltd., signed a preliminary deal giving it stakes in three uranium mines controlled by the state-run uranium agency Kazatomprom.

After that, Giustra’s company, UrAsia, merged with the South African concern Uranium One. The new company was then gradually taken over by Russia’s Rosatom. “[S]hortly after the Russians announced their intention to acquire a majority stake in Uranium One, Mr. Clinton received $500,000 for a Moscow speech from a Russian investment bank with links to the Kremlin that was promoting Uranium One stock,” the story says.

Even if no quid pro quo is substantiated, it all sounds pretty sketchy. But not so fast! There are reasons to doubt that the Times account is entirely accurate. Take that 2005 trip to Kazakhstan by Clinton and Giustra. The Times first reported on it in 2008, but shortly after, Forbes writer Robert Lenzer found that the two men had not in fact traveled together, citing the flight manifest of Giustra’s plane to prove it. “Clinton arrived in Kazakhstan late in the afternoon Sept. 6, 2005, on billionaire Ron Burkle’s plane, four days after Giustra,” wrote Lenzer. “By then Giustra was well on the road to finalizing a memorandum of understanding to acquire a 30% interest in the Kharassan project for $75 million; the state owned the other 70%.”

From the Times story, there’s no way to tell whether the paper is simply repeating an old mistake, or whether Forbes’s debunking has itself been debunked. It’s hard to imagine that the Times could have been so sloppy about facts that have already been aired. But Clinton rules—the second kind—mean there’s a lower standard where attacks on the Clintons are concerned.

So if the Times is building on the work of a right-wing smear merchant, and is in fact wrong about Clinton traveling with Giustra, does that mean we can dismiss the piece? Well, not unless someone in the Clinton camp can explain away this paragraph:

As the Russians gradually assumed control of Uranium One in three separate transactions from 2009 to 2013, Canadian records show, a flow of cash made its way to the Clinton Foundation. Uranium One’s chairman used his family foundation to make four donations totaling $2.35 million. Those contributions were not publicly disclosed by the Clintons, despite an agreement Mrs. Clinton had struck with the Obama White House to publicly identify all donors. Other people with ties to the company made donations as well.

Beneath all the allegations about influence-peddling, this is the single clearest charge in the whole Times story. There is, as of yet, no evidence that Bill Clinton intervened with Kazakhstan’s dictator on behalf of Giustra. And there is no evidence that Hillary Clinton did anything inappropriate as secretary of state to enable Russia to take over the company that Giustra helped build. But this failure of disclosure by the Clinton Foundation is itself a minor scandal, whether or not Hillary Clinton bears any direct responsibility for it. For now, the broader story remains murky, but here, at least, is one rule that seems to have clearly been broken.