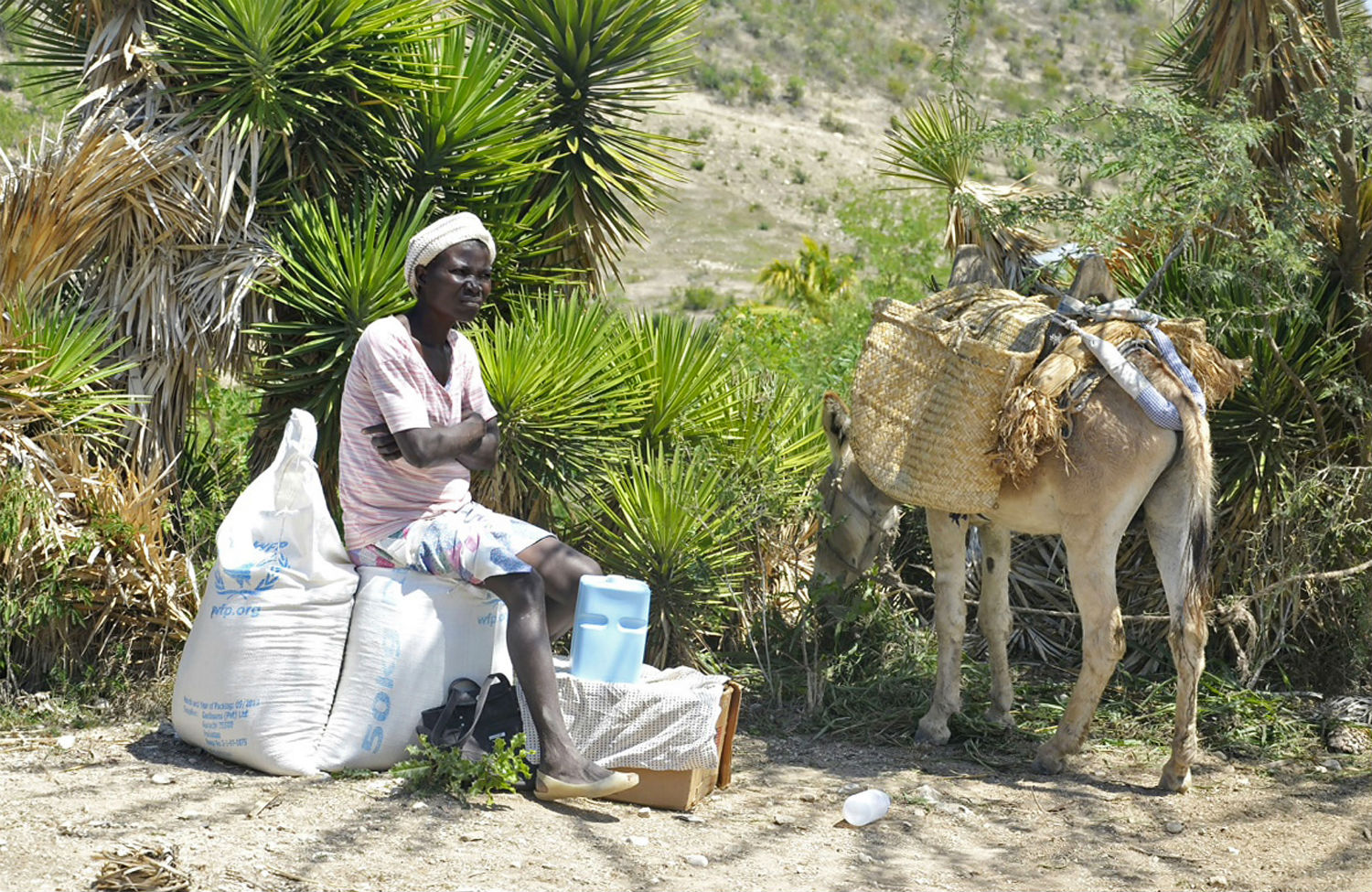 A woman affected by the drought in Haiti, April 3, 2014. (Reuters/Amelie Baron)

The future of our planet looks pretty bleak. The latest report released by the Intergovernmental Panel on Climate Change (IPCC) paints a dire picture: climate change is here to stay, and we’re not doing enough to prepare ourselves.

Extreme weather events from hurricanes to floods and droughts will leave virtually no corner of our planet untouched. Climate chaos will undoubtedly inflict damage upon wealthier nations, but no one is more vulnerable than the world’s poor.

The Latin American and Caribbean region is home to dozens of low- and middle-income countries that are still struggling to develop. Many depend on the warm waters and mild weather of the Caribbean to sustain their crucial agriculture and tourism industries. Climate change threatens the livelihoods of millions of people across the region who rely on these sectors to survive.

The small island nations of the Caribbean depend on the ocean as a source of food and income. Catching and eating fish have been traditions in the region for centuries, and fish remain a dietary staple. However, this heavy reliance on the ocean for sustenance may be upended by climate change. According to a recent report, the world’s oceans will see a 170 percent rise in acidity by the end of the century, which could prove devastating for global fish stocks that are already overexploited.

In the small country of Antigua and Barbuda, a severely impacted fish population would have dire consequences. Located in the western Caribbean, Antigua and Barbuda is the largest per capita consumer of fish in the world. Not only do Antiguans consume a lot of fish, but their country’s location also makes it a prime exporter of fish products to profitable markets in Puerto Rico and the continental United States. The Antiguan export of fish commodities is currently valued at $1.5 million. For fishermen trying to make a living and the rural poor who rely on this industry for food, the future of fishing resources looks grim.

In other countries, the lucrative banana industry is under assault. The bananas grown on the tiny island of Dominica bring in a yearly profit of $68 million, a valuable source of foreign exchange for the small country. The banana industry is also the second-largest employer on the island, accounting for 6,000 jobs for a population of just over 70,000. In 2007, Hurricane Dean ripped through the island, decimating the vital industry. On Christmas Eve 2013, a day meant for shopping and preparing for the upcoming major holiday, Dominicans awoke to heavy rains that caused massive flooding and landslides throughout the island. The changing climate promises even more destructive storms, putting the banana trade—and with it much of the Dominican economy—in mortal peril.

The region depends not only on the exports it sends out, but on the people it brings in. With sandy beaches, sapphire blue waters, exotic plants and colorful marine life, many countries in the region rely on booming tourism sectors. Jamaica’s tourism industry, for example, earns the country approximately $2 billion annually, bringing in nearly fifty percent of its foreign exchange earnings and providing a quarter of all jobs on the island. Now, though, rising sea levels are expected to inundate the coastal areas popular with beachgoers. A World Bank Study found that a 1 meter rise in sea level could destroy sixty percent of the coastal wetlands in the Caribbean and the developing world. More intense hurricanes, rainfall and landslides are all threatening the island’s tourism sector as well.

Though tourists can cause extensive environmental damage, one country manages to boast a thriving, environmentally friendly tourism sector that has still proven lucrative. Costa Rica’s sustainable tourism industry, which has won countless awards, brought in nearly $2.2 billion in 2012 alone.

In 2013, world traveler Larry Kraft took his family to the Monteverde area in north-central Costa Rica. With an elevation of 4,500 feet, Monteverde is popular for its cloud forests, zip-lining, hiking and wildlife. Tour operators constantly tout their sustainable practices and explain how the revenue raised is spent on conservation of the environment. Unfortunately, this ecofriendly tourist destination has already begun to see the negative impacts of climate change.

Members of the Monteverde community told Kraft of worrisome weather pattern changes during the rainy season. The rain was once so predictable that residents could set their clocks to the heavy daily rains. But in recent years, there have been seasons where there simply hasn’t been enough rain. This has led to water shortages within the community and insufficient water for farms located downstream. Because 76 percent of Costa Rica’s electricity comes from hydroelectric plants in the Monteverde watershed, the lack of heavy rains has also caused power outages in the region.

Droughts especially spell disaster for poor countries with weak agricultural sectors. In Haiti, a drought in the northeast region is wiping out crops and livestock, leading to the loss of two harvest seasons. According to an official from the government’s National Food Security Coordination Unit, the drought is causing an “extreme emergency” across the region. Still reeling from its 2010 earthquake and badly underdeveloped after decades of US intervention, internal instability and predatory international “development” policies, Haiti’s food security was already precarious at best.

The drought, which has persisted for eight months and counting, has left farmers without water for crops, drinking or cooking. Hungry children populate schools that have food supplies, but no water to prepare food with. Other schools simply have no food or water at all. The population in northern Haiti needs immediate relief, but experts predict it will take six months for the region to recover.

Mexico is facing similar problems. In 2012 the northern region of Mexico saw record droughts. Though the region is usually arid and has seen droughts before, climate experts worry about the duration and the frequency of the recent shortages. The 2012 drought that plagued the region and extended into the southwestern United States was not just a dry spell but an obvious sign of northern Mexico’s changing climate.

The largest state in Mexico, Chihuahua, has taken a major blow to its livestock and agricultural output. Between July 2011 and July 2012, 350,000 cattle starved to death. And while the state normally produces 100,000 metric tons of corn a year, in 2011 it produced a mere 500. Corn farmers lost a staggering $65 million. The loss of crops and livestock leads to hunger and cripples the ability of farmers to support themselves or participate in their economy, hindering development.

Climate change has already battered the economies of the Latin American and Caribbean region—there is no denying or changing that fact. Looking toward the future, the best regional experts and development professionals can do is focus on mitigation and reducing risk. If the world does not start treating climate change like the serious risk—and the inevitability—that it is, the consequences for the region will be catastrophic.