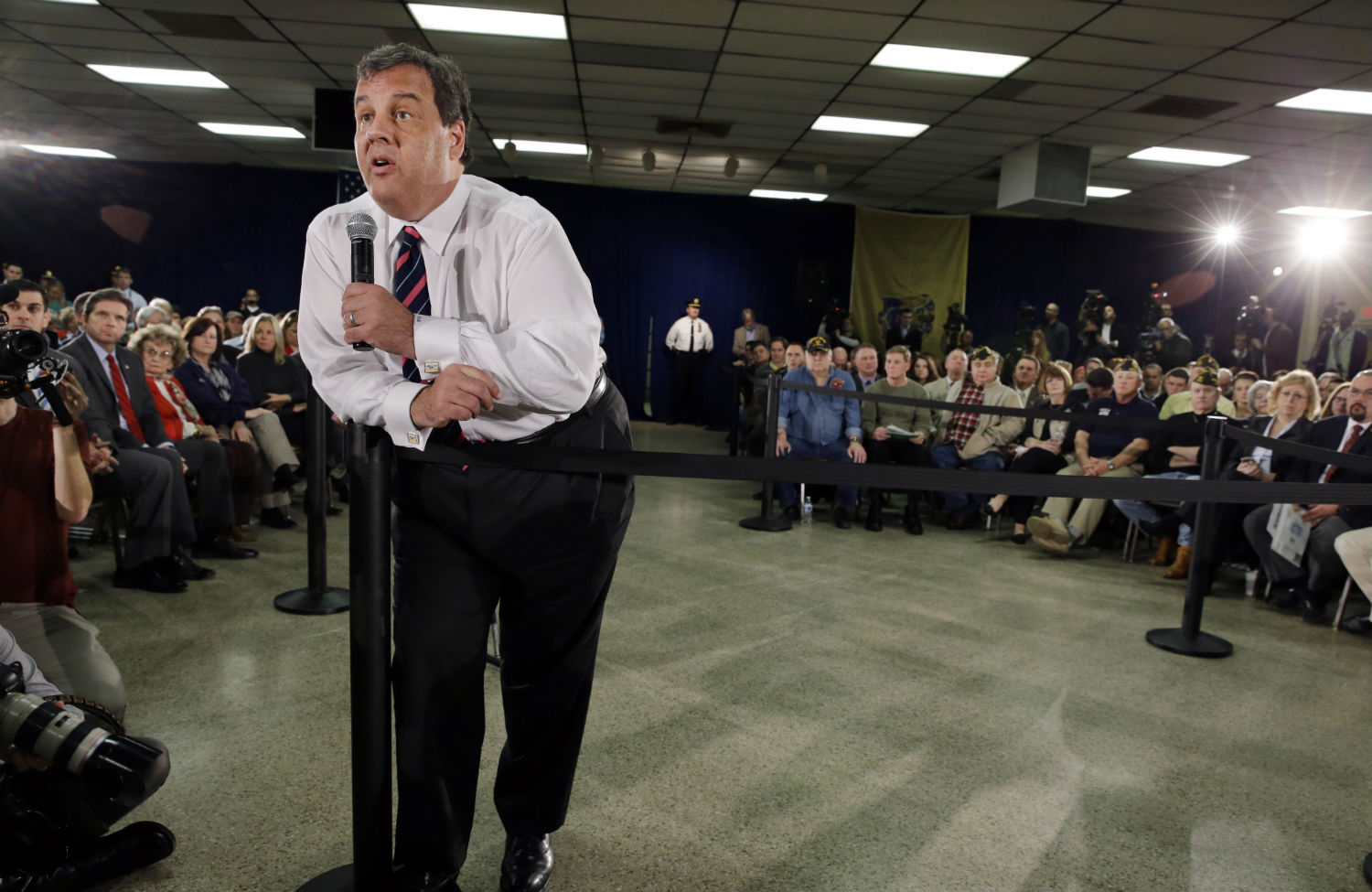 It’s too early to talk about 2016 polling, for lots of reasons, but today Christie Watch is going to start with those polls anyway.

But the early returns do tell us something. And in particular recent polls seem to be saying that New Jersey Governor Chris Christie isn’t dead yet, despite having had his political obituary written and rewritten a dozen times since Bridgegate erupted late last year. With the nationwide Tea Party either dead or dying—or at least being absorbed into the Republican mainstream—it also would appear that Christie, like it or not, could still emerge as the standard-bearer for the GOP’s Wall Street–backed, US Chamber of Commerce–loving, Karl Rove-inspired establishment.

This week Christie is in Pennsylvania, potentially a key swing state on the margins in 2016, where he’s campaigning for Governor Tom Corbett, who’s facing a stiff re-election challenge. His Pennsylvania visit triggered some statewide 2016 polling there, asking voters to decide between Clinton and various GOP challengers.

According to the Quinnipiac Poll, Christie matched up quite well against Clinton, with Clinton leading 45 to 41 percent. That compares favorably to bigger leads for Clinton over other potential Republican candidates, including Rand Paul (51-37), Mike Huckabee (56-32), Jeb Bush (51-35) and Paul Ryan (50-38). It’s particularly significant that Christie held Clinton to less than 50 percent, while none of the other Republicans did. Of course, perhaps Christie is better known to Pennsylvanians because he is governor of a neighboring state. But the results also indicate that Bridgegate and a tangle of other scandals—including mismanaged recovery aid related to Superstorm Sandy, corruption among Christie appointees at the Port Authority and untoward efforts to pressure Hoboken’s mayor by threatening to withhold Sandy aid—haven’t brought Christie down yet. No doubt, the super-wealthy backers of Christie among hedge fund billionaires and other wealthy donors such as Sheldon Adelson are carefully tracking the results of such polls. In addition, Republican pundits are beginning to come around to Christie again.

Even in New Jersey, where voters are paying far closer attention to Bridgegate et al. than voters in, say, Pennsylvania, Iowa or New Hampshire, one recent poll showed a slight uptick in support for Christie among New Jerseyans. According to Fairleigh Dickinson’s PublicMind poll:

Interest in Bridgegate is down and Governor Christie’s approval ratings have stabilized, according to the most recent statewide survey of registered voters from Fairleigh Dickinson University’s PublicMind. Only a quarter (22 percent) now say they are following news about Bridgegate “very closely,” down from 34 percent in March and 38 percent in January. And following a steep drop in support for the governor earlier this year, his approval remains statistically unchanged from its level in March when 41 percent approved of his job performance. Today, 44 percent of registered voters are satisfied with his governance, a number that is identical to those who disapprove of his job performance. In November of last year, he registered a 61 percent approval among voters, a number that fell considerably following Bridgegate revelations, to 48 percent in January.

That doesn’t mean that Christie is out of the woods, but as Christie Watch has pointed out recently, perhaps more damaging to Christie’s popularity in New Jersey is the fact that he’s angering voters, including teachers and other public sector workers, by seeking another round of devastating pension and healthcare benefit cuts. But it appears that people in New Jersey are paying less attention to Bridgegate now, and that’s good for Christie. Says Krista Jenkins, director of the poll and professor of political science at Fairleigh Dickinson:

Of course I’m sure he’d rather have approval ratings in the 60s than 40s, but public approval has not declined further, and that is good news for governor. Add to this a decline in interest in Bridgegate, and the approaching summer may end up feeling that much warmer to Governor Christie.

Christie’s whistle-stop travels for various GOP gubernatorial candidates is giving him plenty of opportunity to make himself known to voters around the country, but perhaps more importantly to have quiet tête-à-têtes with deep-pocketed donors. On May 28, Christie hosted a fundraiser in New Jersey for Iowa Governor Terry Branstad, then left for a two-day trip to New Mexico to stump and raise money for the reelection of Governor Susana Martinez, who, as Christie Watch noted, has been touted as a potential vice-presidential contender on a Christie ticket. On his way back, he stopped off to help Tennessee Governor Bill Haslam, and the week before he campaigned with the Florida Governor Rick Scott.

And Christie is breaking fundraising records for the Republican Governors Association. According to The Wall Street Journal:

New Jersey Gov. Chris Christie has raised more than $50 million as chair of the Republican Governors Association, a record for the group, a RGA spokesman said Thursday. Despite a scandal involving the George Washington Bridge, Mr. Christie has outpaced all other heads of the association in the first six months of their tenures. The last highest amount raised was in 2010, when Mississippi Governor Haley Barbour brought in $25 million, according to the association.

In all, Christie has visited fifteen states so far and “overseen roughly fifty fundraisers,” says the Journal.

A big test for Christie comes June 20, when he’s scheduled to speak at Ralph Reed’s Faith and Freedom Coalition, where according to Politico Christie will address as many as 2,000 evangelical Christians. Reed, a former head of the old Christian Coalition, is otherwise a pragmatic GOP apparatchik, and it isn’t clear whether Tea Party-aligned Christian right activists around the country will buy stock in Christie just yet. (Also on the bill at Faith and Freedom are Huckabee, Ryan and Paul, along with Ted Cruz, Rick Perry, Rick Santorum and Bobby Jindal.) Says Politico:

A longtime Republican strategist described Christie’s appearance as “a sign and an indication that he’s serious about seeking the nomination in 2016, and that he’s not going to concede evangelical or pro-family voters to others.”

“He’s going to make a serious run at those voters, and he’s going to have a story to tell,” the strategist said. “And if he does so with a smart strategy, he’ll get his fair share of that vote.”

Later that day, June 20, Christie heads to New Hampshire, where according to the Bergen Record he’ll be campaigning with one of the two Republicans seeking the nomination for governor there. A pair of former Christie aides are already in New Hampshire: Matt Mowers, executive director of the New Hampshire Republican party, and Colin Reed, who’s managing Scott Brown’s Senate campaign. Mowers, of course, is himself a minor player in Bridgegate, since he led the effort in 2013 to convince Fort Lee’s mayor to endorse Christie, as Christie Watch reported back in March. But, as the blog Blue Jersey asks: “Does NH GOP candidate Walt Havenstein think Christie is coming to NH just for him?”