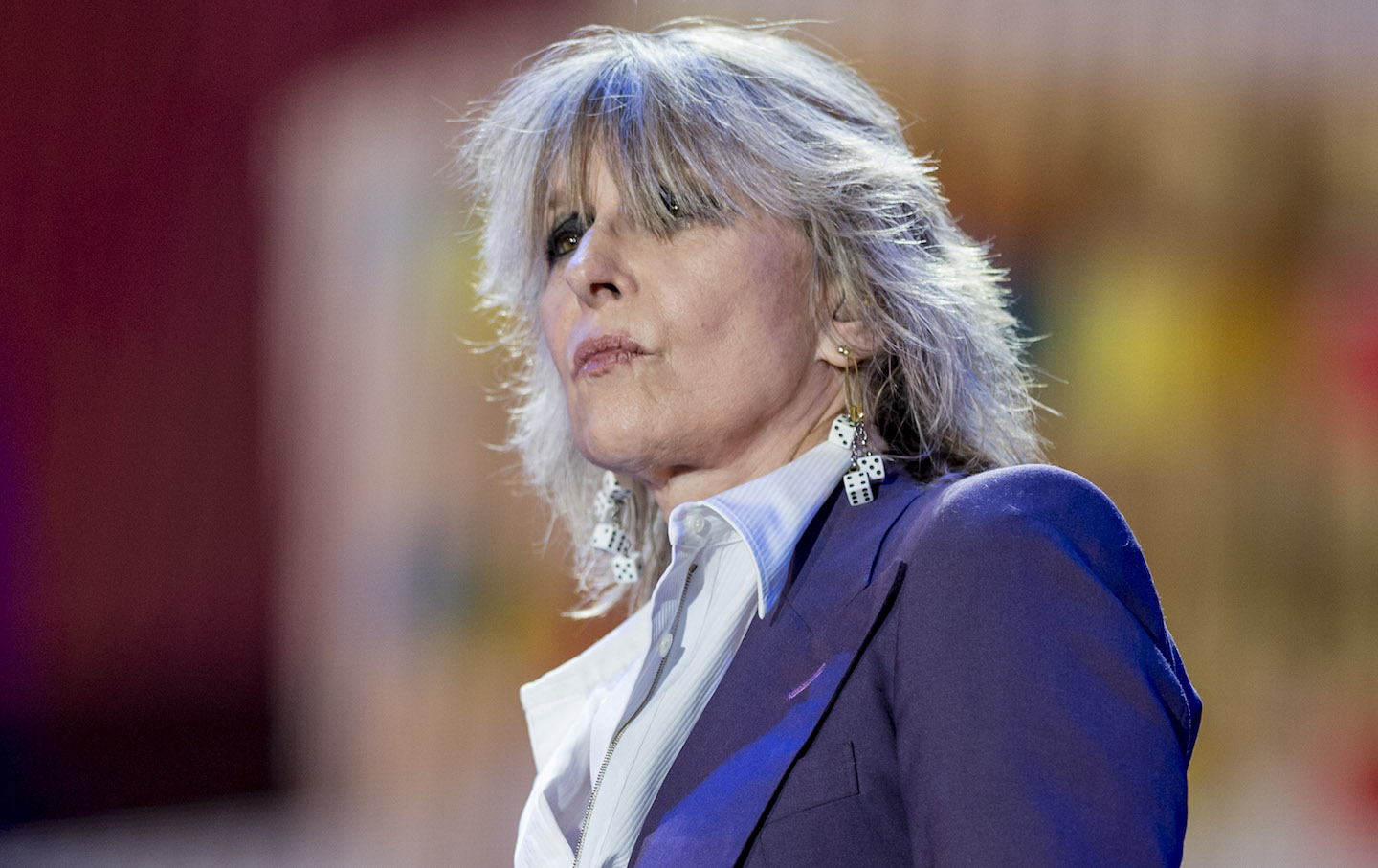 “Two or three” times in her life, Chrissie Hynde has estimated, she had one of her “rare but not entirely unknown moments of thinking, ‘Maybe it’s time to grow up.’” The first time, when she was 16, she threw away her entire collection of Beatles mementos—posters, fan mags, and miscellanea, including a treasured pair of band-tie-in sneakers, which she had been archiving in a special dresser drawer. Hynde recounted this in her 2015 memoir, Reckless. A year after the book was published, she released an album (slyly titled Alone) under the name of the punk band that had established her reputation in the early 1980s, the Pretenders, using studio players and guest artists as the musicians—a punkishly sentimental nod to her past. Hynde has just released her first album since then, this one under her own name, and it sounds very much as if she has decided, in her late 60s, that it’s time to grow up again.

The project, Valve Bone Woe, is a collection of Tin Pan Alley standards, movie songs, musical-theater numbers, and jazz tunes, along with a couple of vintage-rock songs suggestive of standards, arranged for a large jazz ensemble. But it’s not remotely as retrograde or conservative as the categories of the music’s provenance might suggest. This is not another case of bloodless stylist mimicry like the reverential but pointlessly dutiful albums of standards made over the years by rock and pop-rock stars such as Carly Simon, Linda Ronstadt, Rod Stewart, and Paul McCartney. Valve Bone Woe has more in common with the recordings of pre-rock material by James Brown (Soul on Top) and Bob Dylan (his last three releases, the most recent of which, Triplicate, was a triple album of standards). Both Brown and Dylan, and now Hynde, tapped their palpable affection for old songs without abandoning their idiosyncratic musical identities or relinquishing their prerogative to innovate.

Hynde, who stands high in the top tier of songwriters of the past 40 years, has written or cowritten a body of durable songs that certainly qualify as standards of their own genre: “Brass in Pocket,” “My City Was Gone,” “Kid,” “Tattooed Love Boys,” “2000 Miles,” and more. Though typically hard-driving and inseparable from the spiky sound of Hynde’s slashing Keith Richards–like guitar work, nearly all of her songs have been subtly tuneful at their core. They’re catchy pop songs dressed in leather and studs. With “Don’t Get Me Wrong,” a lilting number with multilayered lyrics on the Pretenders’ 1986 album, Get Close, Hynde gave an early hint that she had a feeling for the songwriting style of Cole Porter and his peers. In fact, “Don’t Get Me Wrong” could have fit neatly on Valve Bone Woe if Hynde wanted to make a case for her companionability with the Tin Pan Alley tunesmiths, as Paul McCartney did by slipping a couple of new originals into his standards collection, 2012’s Kisses on the Bottom.

She didn’t need to compose anything on Valve Bone Woe for the songs to come across as works of individual expression. In 1993, Hynde sung alongside Frank Sinatra on “Luck Be a Lady”—Frank Loesser’s slangy portrayal of romance as a crap game, sung as a gambler’s prayer, from his Times Square musical Guys and Dolls—on his final album of new recordings, Duets II. At some point, she absorbed the way Sinatra, Billie Holiday, and a handful of others among the most affective singers of their time made songs sound intimately personal without having to write them—by selecting material that fit the ways they thought and felt, and by singing them as if the words were their own.

The songs on Valve Bone Woe, through written by varied songwriters for a range of purposes, all deal with feelings, themes, ideas, or moods that suit Hynde so well at this stage in her life that they feel autobiographical: “How Glad I Am,” a punchy capitulation to the joys of uncertainty by the little-known songwriters Jimmy Williams and Larry Harrison, a hit for Nancy Wilson when Hynde was a young girl in the 1960s; “I Get Along Without You Very Well (Except Sometimes),” Hoagy Carmichael’s ironic paean to romantic denial; “Hello, Young Lovers,” the Rodgers and Hammerstein ballad from The King and I, which Hynde reads quietly, almost talking the words, with unadorned cynicism; and “Absent Minded Me,” a deceptively serious novelty by Jule Styne and Bob Merrill cut from the 1964 musical Funny Girl, which Hynde tosses off with a self-deprecating shrug.

In addition to the 12 vocal numbers, Valve Bone Woe includes two well-performed instrumental tracks: Charles Mingus’s “Meditation on a Pair of Wire Cutters” and John Coltrane’s “Naima.” All the selections on the album have smart and inventive, often deliciously unconventional arrangements by multiple arrangers, including pianists David Harley and Marius de Vries.

From time to time, usually for occasions such as tribute concerts, Hynde has done high-profile performances of other writers’ songs. In 1992, she sang “I Shall Be Released” in a multistar celebration of Bob Dylan’s 30th anniversary with Columbia Records, and drove the song home as a statement of defiance and will, and not just a sing-along for boomers. By 1998, she would hint at what would come 21 years later at a tribute to Burt Bacharach, crooning a medley of “Baby It’s You” and “Message to Michael,” and bringing out the desperation in the lyrics to the latter that was lost in the hit record by Dionne Warwick. On Valve Bone Woe, Hynde’s singing is simultaneously familiar—she sounds just like Chrissie Hynde, snarling and spitting out words, when they call for snarls and spit—and renewed. She purrs and murmurs on reflective songs such as “I’m a Fool to Want You” and “You Don’t Know What Love Is.” Most impressively, she has refined her manipulation of pitch to the level of Billie Holiday, and I don’t make the comparison lightly. Always a singer aware of the power in bending notes or hanging low on the bottom of a tone on the brink of going flat, for dramatic effect, Hynde swerves in and out and around the pinpoint pitch in phrases throughout every song on Valve Bone Woe. She extracts layers of meaning in the songs, microtone by microtone.

At the same time, she reveals that she has a greater vocal range than she generally displayed on her rock albums. There’s a point in “Absent Minded Me,” for instance, where she hits a fairly high note with a clear, ringing tone she had never before shown she could produce. The moment reinforces one of the main takeaways of her unexpected new project: Hynde, at 68, still has a few surprises in her. If Valve Bone Woe is yet another phase in Chrissie Hynde’s ongoing project of growing up, it represents a conception of maturation not as a process of mellowing or winding down, but of exercising the right to try something you’ve never done before and of having the resources in reserve to pull it off.