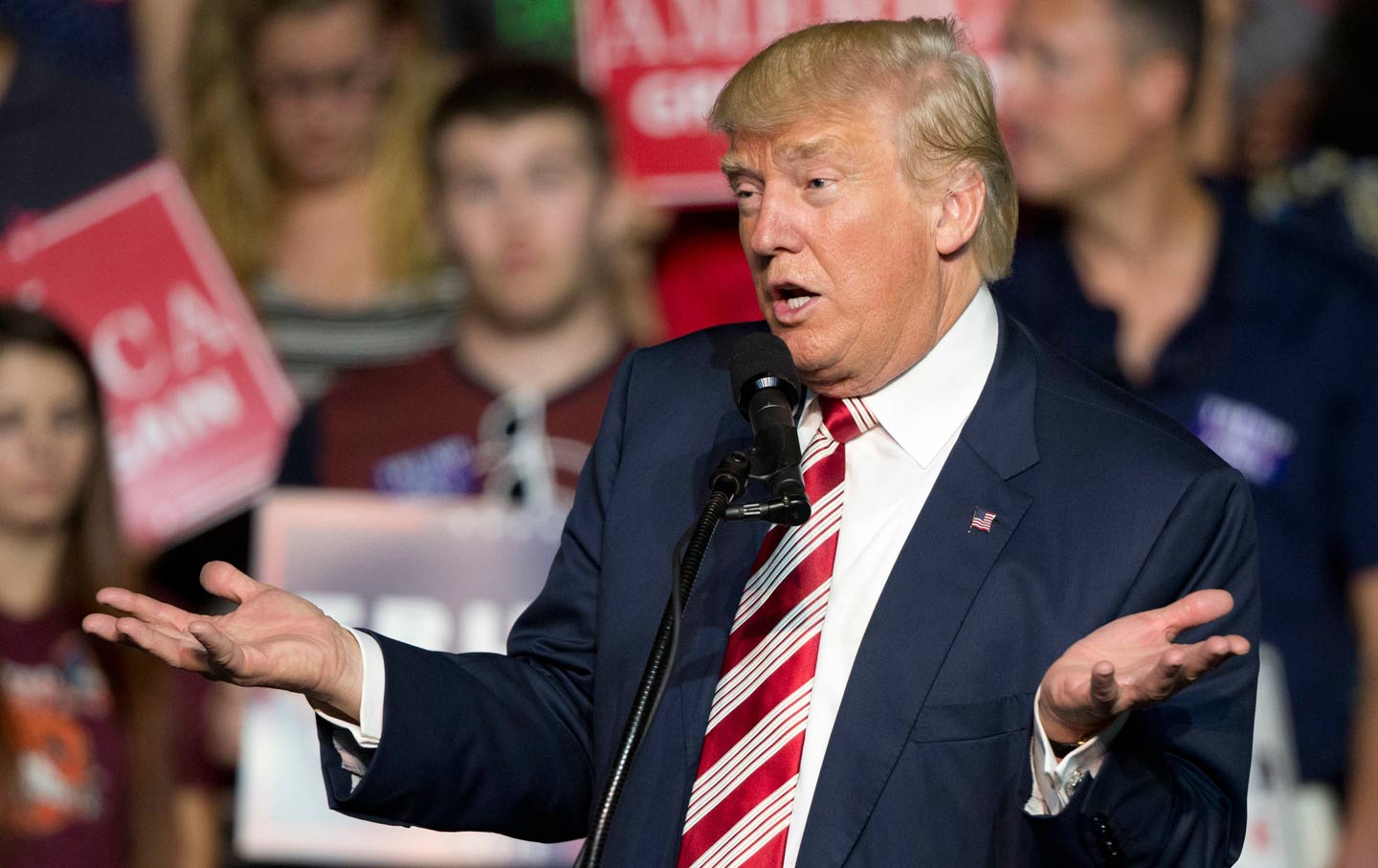 Donald Trump during a rally in Roanoke, Virginia, on September 24, 2016.

Chris Hayes is the Emmy award-winning host of ‘All In with Chris Hayes,’ weeknights on MSNBC, and author of the new book A Colony in a Nation. He’s also an editor-at-large of The Nation.

Listen to Chris Hayes on the Start Making Sense podcast.

JW: A week after repeal-and-replace failed in the House, we’re trying to assess the damage to Trump and the opportunities for progressives. Seems to me this is a disaster for Trump, and a disaster for the Republican Party. Is it possible this is wrong?

CH: No. I don’t think you’re wrong. What an unbelievable failure. I have never, in my political reporting career, seen something crash and burn quite like this. Sixty times they voted for repeal, while Obama was president, and now you cannot get a vote for this piece of, frankly, garbage legislation that no one liked—no one across the ideological spectrum.

Policing the Colony: From the American Revolution to Ferguson

CH: Right. Now, to take a slightly contrarian note, they had backed themselves into a corner, and I actually think pulling the bill and moving on was the best thing for them to do politically, and also the best thing for the country. It’s a huge win for the Democrats, but it’s also the least ignominious thing the Republicans could do. Because if Trump made people walk the plank in the House, you’ve just painted a target on everyone in the House that voted for it. If you actually succeed in passing the thing, it’s a terrible piece of legislation that will cause huge amounts of material harm and havoc to actual human beings—which will also be bad for you politically.

CH: Here’s my read on the politics of this: Paul Ryan’s agenda was rejected by the voters in 2012. The Ryan-Romney budget was this specific kind of Washington think tank program: cut social programs for the poor, voucherize Medicare. He’s been dreaming of doing that forever. There were basically 16 people running for president on the Republican side who were in line with that agenda. There was one who was not: Donald Trump, who said on his first day, “We’re not going to cut Social Security, Medicare, and Medicaid.” Trump’s political genius in that primary was to recognize not only that there was no core constituency support for Paul Ryan-ism in the electorate at large, there was none in the Republican base. They didn’t want voucherized Medicare. They wanted the social welfare state for their people, and a target drawn on the enemies of those people, from immigrants to people making bad trade deals. Donald Trump’s genius was to give them that.

Then he gets to Congress, and all of a sudden, he is selling Ryan-ism. They all forgot that no one likes Ryan-ism. Literally no one. It is an ideology with no constituency. And now, they’re going to make the same mistake again.

JW: On the budget.

JW: Let’s talk about where progressives stand at this moment. We have a president severely weakened. We have a Republican Party deeply divided. Where can progressives take this?

CH: The short-term political horizon is the 2018 midterms. We have seen a level of investment from citizens in their Congressional representation that is astonishing and welcomed: the Town Halls, the Indivisible movement, people flooding the phone banks. It’s worked. It will keep working. There’s huge momentum there.

In a broader sense, I do think that proposing a pro-active agenda is a good idea, particularly in healthcare—whether that’s Medicare for all, or the public option, or fixing some of the ways that the Affordable Care Act really is broken. More broadly, I think the Sanders vision has made a lot of ground in the party. Elizabeth Warren said she supported single payer the other day, I think. I think that there’s an ideological opportunity as Ryan-ism is rejected for the kind of sort of comprehensive, universalist idea, as opposed to mean-tested targeted things. I think it’s one of the divisions in the Democratic Party on a policy perspective, and I think the universalists have the better case on the merits, but also on the politics. I think you’re going to see the party move in that direction.

JW: One more thing. Russia. Some of our friends argue it’s a mistake for the Democrats to focus on Russia. The base is not interested in the Trump’s campaign’s collusion with Russia. It’s got to be jobs, healthcare, single payer. Focusing on Russia is a mistake. Do you agree with that?

CH: No. I think getting to the bottom of the Russia story is important. I don’t know where we are in it frankly. It could be the biggest political scandal probably in the history of the country, if the facts shake out in that direction. Or it could not be. It could be a sort of stunning bit of sabotage by a foreign adversary, which itself is deeply problematic and worrying for a lot of reasons. Making sure that there’s an investigation, that the FBI’s independence can be protected—all of that is really important. That said, I do think that people who say the politics of this aren’t the most potent anti-Trump politics are correct. But that doesn’t mean you shouldn’t pursue it.

Everything about the healthcare bill was extraordinary—but it was also ordinary politics. It wasn’t a Trump gaff. It wasn’t a tweet. It was just a bad piece of legislation that would have done tangible harm to people’s lives, and was rejected by the public. That’s what has delivered him his biggest political defeat, and I think that will continue to be the case.