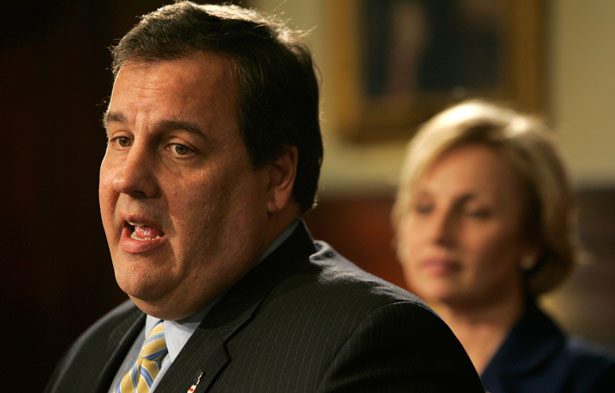 President Obama will make a campaign swing into the battleground state of Virginia this weekend, on behalf of Democratic gubernatorial candidate Terry McAuliffe.

McAuliffe has been consistently ahead in the polls and his chances of winning look reasonably good—as do those of other Virginia Democrats in high-profile races. The Virginia Democrats have two advantages: Republican foes who have gone to extremes on social issues and a broad revulsion in a state with high levels of federal employment at Republican tactics during the government shutdown.

So Obama’s trip to Virginia comes with few risks.

The thing is that, at this point in his tenure, Obama could afford to take some political risks.

For instance, he could travel to the other state that is holding a gubernatorial election this fall: New Jersey.

Though New Jersey is a more reliably Democratic state than Virginia by most measures, it has a Republican governor who leads in the polls. Though Chris Christie is actually very conservative, he has done a better job than his Virginia counterparts of positioning himself as a relative moderate. And a big boost for that strategy has come from Christie’s association with President Obama, who worked with Christie closely after Superstorm Sandy hit the state last year—and who so far has steered clear of any significant role in this year’s gubernatorial contest.

It is good that Obama and Christie worked well together following a natural disaster.

But that does not make Christie a moderate.

He has fundamental differences with Obama and the Democrats, and those differences will come into stark relief if Christie is re-elected, as the Republican will immediately begin positioning as a contender for his party’s 2016 presidential nomination.

To elbow his way into GOP contention, however, Christie must win big in New Jersey next Tuesday. So the governor is running an expensive and aggressive re-election campaign, with plenty of help from the Republican National Committee and the Republican Governors Association.

He wants a landslide win, and polls suggest he could get it. But to assure that he secures the numbers he is seeking, Christie must attract support not just from Republicans but from independents and Democrats. Much of the Christie campaign’s thrust is aimed at winning the votes of New Jerseyans who don’t often back Republicans—and who probably would not vote for Christie if he was entirely frank about his right-wing social and economic stances.

A visit from Obama this weekend could bring some perspective to the race, perspective that Christie’s able-but-underfinanced Democratic challenger, state Senator Barbara Buono, has been trying—against some pretty tough odds—to provide.

Buono’s new television ad gets to the point. Standing in front of a school-yard fence, the senator says:

I’m Barbara Buono, the only one actually running for governor. Chris Christie’s got his sights set on the Republican presidential primary. That’s why he defunded Planned Parenthood, opposes abortion rights, vetoed gay marriage and stands with the gun lobby on background checks. With 400,000 New Jerseyans out of work and our poverty rate at a 50-year high, Christie raised taxes on the working poor—but won’t ask millionaires to pay another dime. He wants to be president. I want to be your governor.

Buono’s making an important point. But she lacks the bully pulpit that Christie has. According to a Newark Star-Ledger analysis, the Republican governor has over the past six months raised $12.7 million and aired sixteen distinct television commercials on television stations that reach New Jersey voters. The Democrat has raised just $2.9 million and aired two commercials.

Christie has also benefited from a taxpayer-funded “Stronger Than the Storm” ad campaign, in which he appears. But he may benefit most from that image as the Republican governor who worked with President Obama.

Obama can acknowledge the cooperation.

But he can also acknowledge that, on policy, he disagrees with Christie on just about everything—including the current debate over implementation of the Affordable Care Act. If the president noted those differences in an appearance with Buono he would, at the very least, provide a frame of reference for New Jersey voters who might otherwise be misled by the governor’s slick-and-cynical campaign.

Chris Christie is a very conservative Republican. There’s nothing moderate about the guy. And Barack Obama ought to say that.