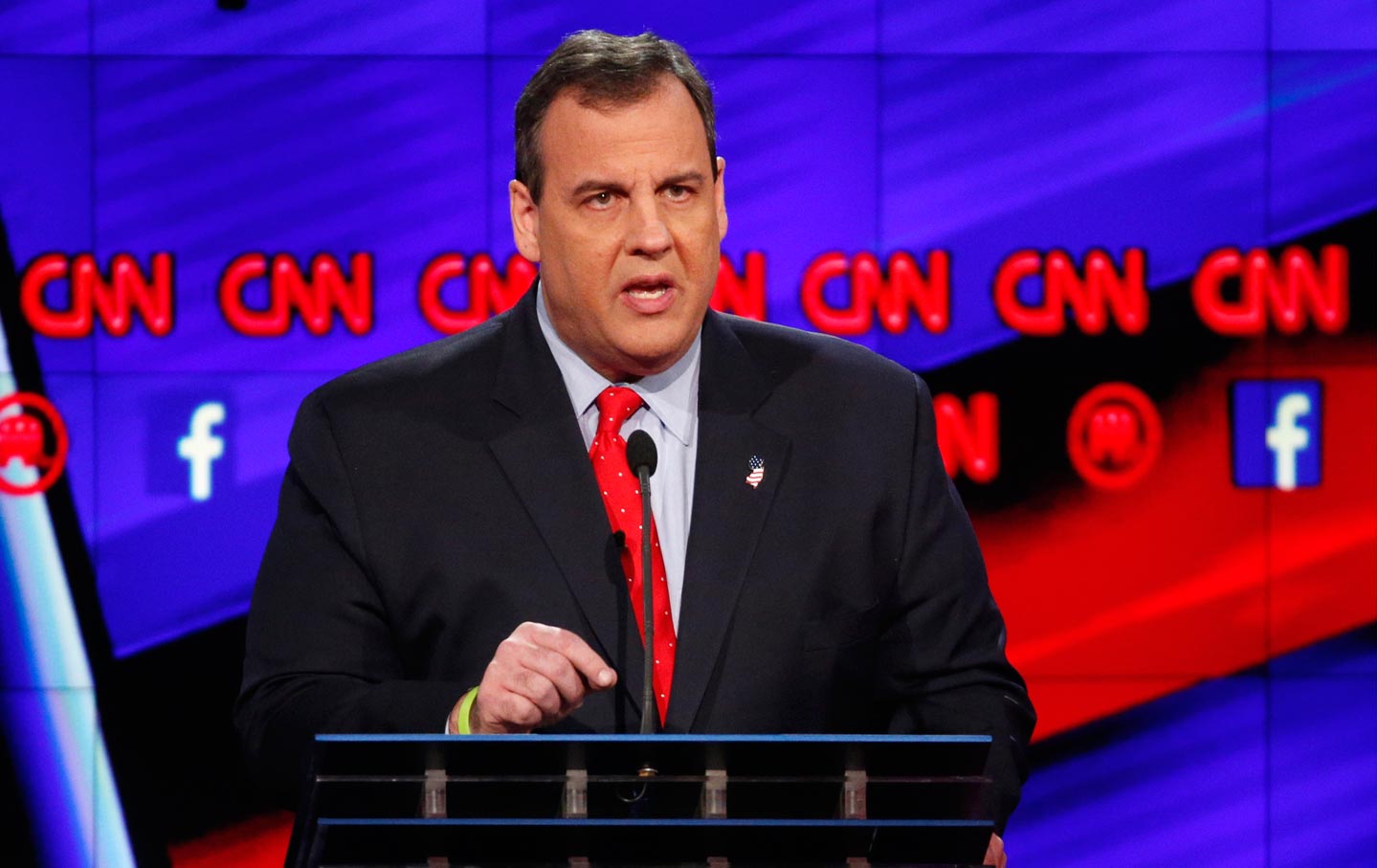 My favorite moment during the GOP debate in Las Vegas came when Rand Paul cut my governor off at the kneecaps.

Not that that’s hard to do. When Chris Christie overplays his tell-it-like-it-is, Jersey-tough-guy shtick—encouraged lately by a slight bump he has raised in the New Hampshire polls—he tends to walk into traps of his own making.

CNN debate moderator Wolf Blitzer had asked him whether, if the United States imposed a no-fly zone over Syria and a Russian plane invaded it, he would “be prepared to shoot down that Russian plane and risk war with Russia.”

“Not only would I be prepared to do it, I would do it,” Christie said, without hesitation.

“Maybe because I’m from New Jersey, I just have this kind of plain-language hang-up. But I would make very clear [and tell Vladimir Putin], ‘Listen, Mr. President, there’s a no-fly zone in Syria; you fly in, it applies to you.’ And yes, we would shoot down the planes of Russian pilots if in fact they were stupid enough to think that this president was the same feckless weakling that the president we have in the Oval Office is right now.”

This was just too easy a set-up for Rand Paul. “Well, I think if you’re in favor of World War III, you have your candidate,” Paul said to a mixture of jeers and cheers. Noting that Hillary Clinton also advocates a no-fly zone, Paul wondered if we really want “someone who is so reckless as to stand on the stage and say, ‘Yes, I’m jumping up and down, I’m going to shoot down Russian planes.’ Russia already flies in that airspace. It may not be something we’re in love with the fact that they’re there, but they were invited by Iraq and by Syria to fly in that airspace.”

When we think about the judgment of someone who might want World War III, we might think about someone who would shut down a bridge because they don’t like their friends.

Christie acted like he never heard the B-word, of course, sputtering on in his reply about how Obama and Clinton were truly reckless for inviting Russia into Syria in the first place (Russia built its military base in Syria in 1971, when Obama was 10 years old, but hey, the Guv is communicatin’ here).

And many in the Beltway media acted like they didn’t hear it, either. They’re eager for Christie to score a Comeback Kid moment in New Hampshire, especially since the conservative Manchester Union Leader endorsed him last month. The Washington Post’s Chris Cillizza and Jennifer Rubin both deemed Christie one of the debate’s big winners, with the latter writing that the governor “played the role of the experienced adult.”

Really, who he plays in these debates is Frank Underwood, looking straight into the camera like there’s no one else onstage to deliver a monologue through the tumbled fourth wall—Look into my eyes, America!—reaching through the media frame to deliver a slap of cold, hard truth. As when he said from the Vegas stage when Cruz and Rubio got into the legislative weeds about terrorism and immigration, “Listen, I want to talk to the audience at home for a second. If your eyes are glazing over like mine, this is what it’s like to be on the floor of the United States Senate. I mean, endless debates about how many angels on the head of a pin from people who’ve never had to make a consequential decision in an executive position.

“The fact is, for seven years, I had to make these decisions after 9/11, make a decision about how to proceed forward with an investigation or how to pull back, whether you use certain actionable intelligence or whether not to. And yet they continue to debate about this bill and in the subcommittee and what—nobody in America cares about that.”

Those last six words are actually true, and fit Christie’s own FU-like swagger. But then he goes and overdoes it—verbally shooting down the Russkies, pretending Bridgegate is behind him (why, his own lawyers exonerated him!), and mentioning five times that he was a former federal prosecutor whose career was devoted to fighting terrorism. Which is so not true, as Olivia Nuzzi chronicles in the Daily Beast, that it should taint every clause it touches (Christie in fact focused like a laser on corruption cases, even in the aftermath of 9/11, because bringing the New Jersey political class to heel was his first step toward higher office). Christie claimed at the debate that his office “thwarted” “two of the biggest terrorism cases in the world”—though those cases, as Nuzzi says, might be better characterized as “the results of entrapment.”

And for years the media has fallen for it. Christie was the made-for-the-Internet candidate, the YouTube vids of him yelling at the press or teachers or anyone who looked at him wrong going viral for their raw, bully quality. Christie in fact was always a risky bet, even before Bridgegate effectively ended his political career, because they don’t go for that kind of thuggish impoliteness down South.

Unless, of course, it comes from Donald Trump, who plays the tough guy a hundred times better. And Trump has something else—he’s likable. Christie has his charms, but mostly he’s angry and full of hot air. Christie would shoot down Russian planes (and decades of a hard-won US-Russian cold peace) in a heartbeat, but he’ll take days to shoot down Trump’s lie that “thousands and thousands” of Muslims in Jersey City celebrated 9/11. Then, when Trump struck back that Christie “totally knew” about closing the George Washington Bridge, Christie, as NJ.com put it, “curled up in Trump’s lap like a warm kitten.”

It must be maddening: Christie sees Trump say stupid, career-ending slurs, he sees him flick off one premature obit after another and come out stronger each time. “Why can’t I be like that?” Christie must wonder. Why don’t Bridgegate, New Jersey’s nine credit downgrades, the highest foreclosure rate in the country, the outrage of Hurricane Sandy victims who feel betrayed by the shenanigans with federal relief money, just make me stronger the way Trump’s excesses do?

Ah, the difference between being a reality-TV star and just acting like one. One day, after the delusion that he can be prez fades but his rage continues to boil, Chris Christie’s going to look directly into the camera and say, “Listen, I want to talk to the audience at home for a second. You people disappoint me…. Sit down and shut up!”