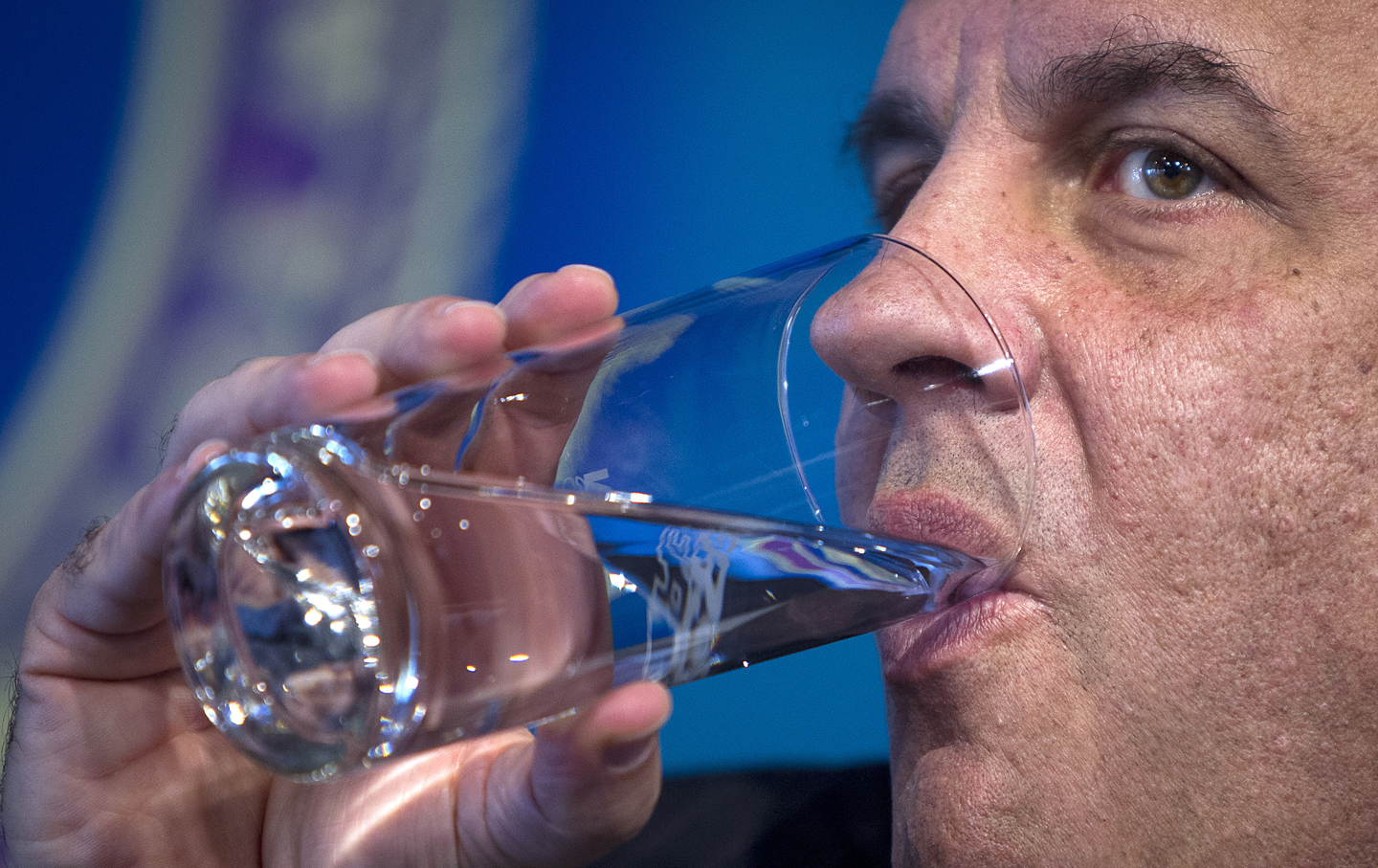 Governor of New Jersey and 2016 presidential candidate Chris Christie takes a sip of water during a news conference on October 24, 2014. (Reuters/Carlo Allegri)

In 2010, the citizens of Trenton, New Jersey, were asked to sell part of their water system for $80 million to New Jersey American Water, the largest private water utility company in the state. Despite the company’s best lobbying efforts—a $1 million spending spree that included an onslaught of advertisements, telephone calls, and door-to-door canvassers—the voters weren’t persuaded. They rejected the privatization attempt by nearly four-to-one at the ballot box.

“Private control of the water supply could lead to decisions driven by profit,” explained Jim Carlucci, a third-generation Trentonian and longtime community activist who volunteered for Stop the Sale, the campaign against privatization. “We were able to put our message across that this was a very bad deal for the city.”

Detroit Is Ground Zero in the New Fight for Water Rights

In Flint, Michigan, Overpriced Water is Causing People’s Skin to Erupt in Rashes and Hair to Fall Out.

In recent months, however, lawmakers in New Jersey have passed legislation that attempts to silence the voices of communities like Trenton. The Water Infrastructure Protection Act (WIPA), signed by Governor (and presidential candidate) Chris Christie in February, empowers municipalities to sell their water utilities to private corporations without a public vote.

Privately operated water systems already supply water to roughly half of New Jersey’s population. But before WIPA, local governments interested in auctioning off their water utilities were required by law to finalize deals through a public referendum. Now communities with aging systems that meet a set of broadly drawn emergency conditions can sell their water utilities without a ballot measure, making it even easier for private companies to gobble them up. Opposition to the law is mounting from grassroots organizations, unions, and national environmental groups.

“It’s a great deal for water companies. It’s a terrible deal for citizens,” says state Senator Bob Smith, a Democrat from Middlesex, who opposed the bill. “Let’s call it what it is: greed.”

The private water industry was instrumental in passing WIPA. In 2010, Christie formed a privatization task force to determine “areas where government services and functions can be provided by the private sector.” Two of the group’s five members have ties to private water companies, with one serving as a former chief lobbyist for New Jersey American Water. And the chair of the task force, Dick Zimmer, was a former Republican congressman whose tenure in the 1990s included an attempt to privatize the Tennessee Valley Authority. Between the time of the bill’s passage in the State Senate and its signing, American Water, the country’s largest publicly traded water and sewer company, contributed $50,000 to the Republican Governors Association, which Christie then chaired.

Supporters of WIPA say that fast-tracking privatization is necessary to revitalize New Jersey’s crumbling water systems. Since 1977, the federal government has slashed its water infrastructure investment by over 80 percent, leaving many towns and cities struggling to pay the cost of upkeep. With few other options, numerous New Jersey municipalities have turned to the private sector for assistance—and revenue; in addition to taking a utility off a city’s hands, the sale provides a quick infusion of cash that can help reduce steep budget deficits.

The Christie administration has also done its best to make privatization inevitable. The governor’s 2014 budget cut more than $80 million from Department of Environmental Protection—money the agency could have spent on much-needed water infrastructure enhancement projects. And a program unveiled in January that would provide $500,000 in principal-forgiveness loans to towns with combined sewer systems hardly covers the financial burden—Paterson alone requires $1 billion in repairs.

But, if privatization can seem like an easy remedy for desperate municipalities, critics warn that past schemes have promised far more than they delivered. Not only have they failed to make infrastructure improvements, many have also passed the cost of the purchase on to the public through rate hikes (which WIPA explicitly allows).

In 1996, the township of North Brunswick entered a 20-year, $200 million contract with US Water (now owned by United Water), only to have water bills double and even triple for many households. Indeed, a 2010 report by Food & Water Watch found that residents in municipalities with private water systems paid, on average, 64 percent more than households served by public systems. (On the global level, a meta-regression analysis of all econometric studies from 1965–2008 that examined the cost of water-system privatization concluded that there is “no systematic support for lower costs with private production,” refuting a popular refrain of privatization advocates.)

“This money isn’t being reinvested back into updating our deteriorated water systems,” says Jim Walsh, mid-Atlantic region director of Food & Water Watch, a nonprofit based in Washington. “It’s siphoned off to executive salaries, Wall Street hedge funds, and other stockholders.”

WIPA’s opponents and supporters do agree on one thing: New Jersey’s water systems are in dire need of investment. The state’s water infrastructure is old, with some of it dating to the 1800s. And most of New Jersey’s historic urban areas, such as Paterson and Jersey City, have combined sewer systems that release sewage into streams and rivers when the system is overwhelmed by heavy rainfall; an estimated 23 billion gallons of raw sewage and storm water slosh into the state’s waterways each year. According to Environmental Protection Agency estimates, the restoration of New Jersey’s water, stormwater, and wastewater systems would cost $41 billion over the next two decades.

WIPA’s sponsors say that private corporations are better equipped to handle the infrastructure crisis than public utilities. “The challenges of maintaining and replacing aging water infrastructure can escalate quickly beyond the technical and financial means of government entities and taxpayers,” said state Senator Joe Kyrillos, a Republican from Monmouth, in a statement. Kyrillos, who co-sponsored the bill, added that private entities have the “sufficient resources and know-how to take over these systems and effectively address emergent conditions.”

Yet Christie’s model of privatization has a mixed track record, both inside and outside the state. In 2003, Atlanta terminated its 20-year, $428 million contract with United Water, a subsidiary of the French multinational Suez, after four years of mismanagement and poor service. On numerous occasions, residents had to boil brown, particle-laden water that flowed from their taps as rust and debris were allowed to build up. And in 2001, the company failed to complete more than half of all required repairs, thanks in part to its reduced workforce. (It was later discovered that then-Mayor Bill Campbell, who backed the contract, enjoyed a $12,900 Paris vacation with his mistress courtesy of Suez.)

Meanwhile, in New Jersey, a five-year federal and state investigation into elevated levels of childhood cancer in Toms River linked contaminated drinking water supplied by United Water to numerous cases of leukemia in girls. The small sample size prevented an explicit conclusion, but, just days before the study was released in 2001, United Water Toms River, along with two chemical companies, paid multimillion-dollar settlements to 69 families with sick children. (In the following months, the company reached settlements with dozens of other families). Years later, the state also determined that United Water Toms River had manipulated drinking water tests in order to conceal quality violations.

“When you go the privatization route you lose accountability,” says Carol Gay, president of the New Jersey State Industrial Union Council. “They have to cut cost somewhere to make the profits they want to make. One way to cut cost is through labor.”

A 2009 Food & Water Watch survey revealed that the private takeover of water systems results in steep job cuts, with the workforce shrinking by an average of one-third. Having fewer employees makes it more difficult to keep up with maintenance repairs that ensure quality service.

In spite of the apparent risks of privatization, a flood of policy papers from right-wing and libertarian think tanks like the Reason Foundation and Cato Institute continue to push “market solutions” to the world’s water crisis. The private water industry also seems to have found an ally in certain quarters of the Obama administration. In January, the EPA launched a new Water Finance Center as part of the administration’s Build America Investment Initiative, which seeks “to put private capital to work in revitalizing US infrastructure.” The center is intended to help communities “explore creative and innovative financing practices, including public-private partnerships.” The president’s fiscal year 2016 budget also eliminates loan guarantees for community water facilities and grants for states to conduct water-quality research.

“This bill is designed to take away public oversight and input into privatization.” —Jeff Tittel

To date, privately owned water utilities serve only 13 percent of Americans, but the push from DC, along with laws like WIPA, threaten to alter the balance. New Jersey joins several other states, including Pennsylvania and Illinois, where the sale of water utilities does not require a public referendum.

Still, WIPA supporters maintain that the law does not give private industry an unfair advantage but, rather, protects the public’s will by requiring municipalities to prove that their system is deficient before putting it up for sale. Activists, however, argue that the emergency conditions are so loosely defined that most municipalities will qualify. Citizens will have just 45 days from the announcement of a sale to mobilize and collect signatures from 15 percent of their municipality’s voting population to provoke a ballot measure.

“This bill is designed to take away public oversight and input into privatization,” says Jeff Tittel, director of the New Jersey Sierra Club, lamenting the short period of time given to organize sufficient opposition. “You’re talking about volunteers. We’re not private water companies with hired gun lobbyists with big consultants. We’re citizen groups with petitions.”

Tittel’s prediction may soon be put to the test. Unhindered by the threat of public opinion, several local governments have taken steps toward selling their water utilities. In the month following WIPA’s signing, officials in Bridgeton and Woodbury announced the formation of water study committees to consider privatization. And in June the mayor of West Milford, Bettina Bieri, announced that she and the commissioners of the Municipal Utilities Authority were moving toward selling the township’s public water utility to a private company. Calling it “a no-risk endeavor that may reap huge benefits,” Bieri said that the sale would not increase water rates, even as commissioners warned that it might.

“I truly believe that now is the time,” the mayor said.