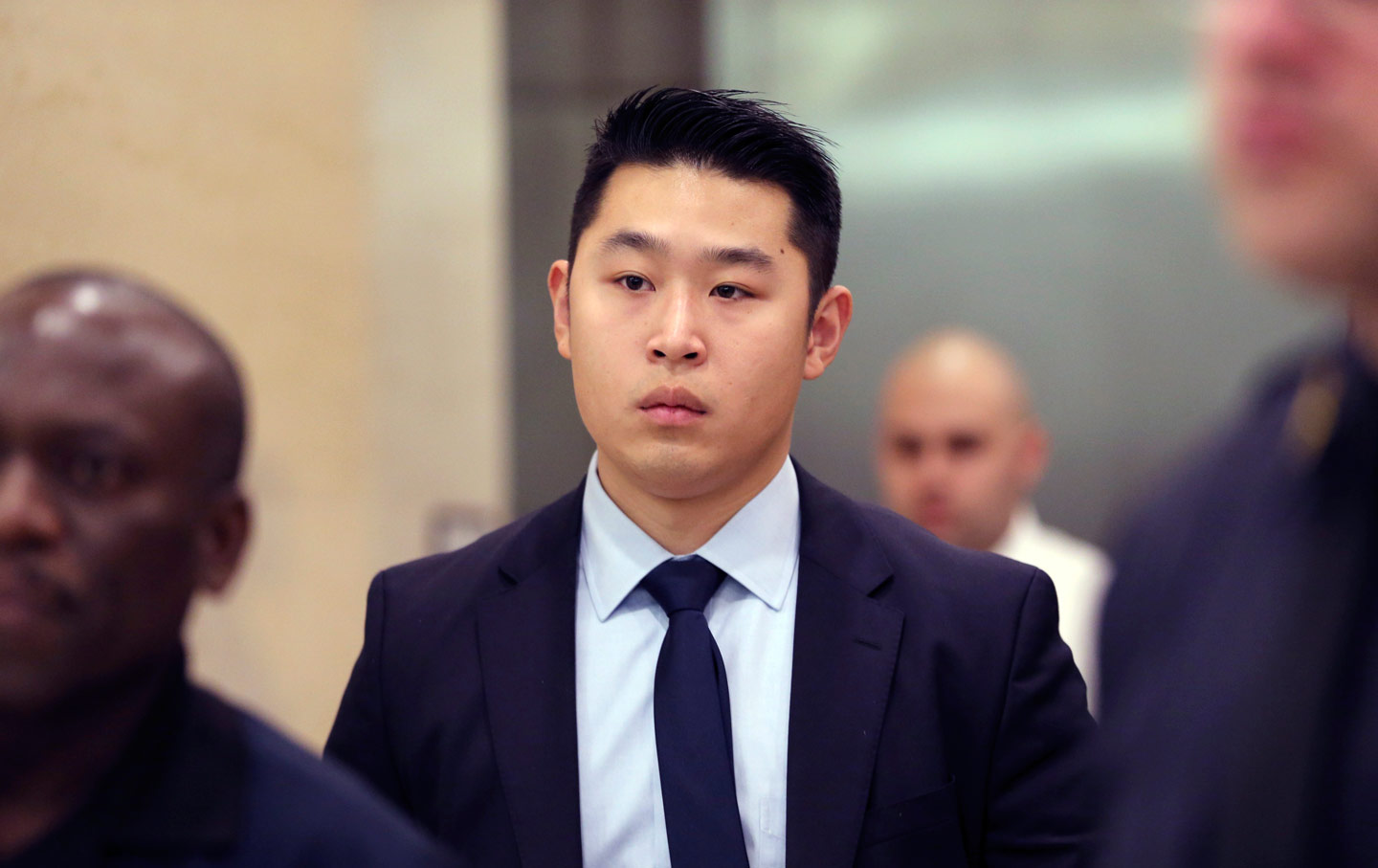 Police Officer Peter Liang leaves the courtroom during a break in closing arguments for his trial regarding the fatal shooting of Akai Gurley. (AP Photo / Mary Altaffer)

Brooklyn District Attorney Ken Thompson’s recent sentencing recommendation for former NYPD officer Peter Liang in the killing of Akai Gurley should strongly refute the notion that Liang has been the subject of anti-Asian bias. Thompson essentially recommended a pardon of Liang on a felony conviction, which would be similar lax treatment to that the last New York City officer convicted of unjustly killing a civilian received, a decade ago. Brooklyn Supreme Court Justice Justice Danny K. Chun will sentence Liang tomorrow, April 14.

The fact remains that police officers who brutalize and kill people in this country—whether the officers are black, white, Asian, or Latino—are held above the law and treated to a legal double standard. That’s why it had been a decade since the last conviction in New York, despite several such killings during that period.

Black and Latino people in this country are the primary targets of such police violence—and the resulting injustice from no accountability—but Asian Americans have also faced it. Chinese and Asian Americans should not forget this.

Why Are Some Asians Still Supporting the Cop Who Shot Akai Gurley?

From New York to California, the conviction of Liang for killing Gurley, failing to report the shooting, or provide life-saving medical assistance, provoked strong reaction from some in Chinese and Asian American communities. While media observations of pro-Liang rallies were simplified to convey unified sentiment and even framed as the beginning of political activism in Chinese communities, neither is true.

The reality is that there is significant support in our communities for holding Liang and all officers who unjustly kill accountable, regardless of their race.

But we should acknowledge and address the significant numbers of those who have demonstrated and opposed the conviction, unpacking the context and influences behind these sentiments.

While some Chinese-community members demonstrated and engaged in social media opposing the conviction of Liang, their sentiments were far from uniform. Many expressed condolences for Gurley’s family, while suggesting Liang’s conviction was disproportionate; others voiced pro-police views that defended police impunity; and some even conveyed toxic racism.

The views within Chinese and Asian communities, like any, are not monolithic. It’s important to look below the surface to understand the pertinent motivations and emotions at play, in a way that challenges us all to address underlying issues of race in a constructive way.

While we found pro-Liang sentiment to be a reactionary oversimplification—partially fueled by misinformation—the resonance of an anti-Asian discrimination message is not surprising. We understand and share the frustration in recognizing historical and current-day racial discrimination, from the Chinese Exclusion Act to the murder of Vincent Chin and the unwarranted surveillance of South/Southeast Asian and Muslim communities.

The historical racism directed at Chinese people is deeply felt, but we should be united and focused on where that bias truly and systemically exists. The conviction of Peter Liang was never an appropriate example of systemic racism. Liang may not have intended to kill Akai Gurley, but his reckless actions with a deadly firearm resulted in Gurley’s death—the actual definition of second-degree manslaughter. His failure to offer medical assistance while Gurley lay dying clearly was official misconduct.

A case often cited is the racially motivated murder of Vincent Chin in 1982. After Liang’s conviction, Annie Tan, the niece of Chin, herself sought to highlight that Chin had more in common with Gurley than with Liang, and that Chinese people should stand with the Gurley family in demanding justice. Her words proved prescient, given DA Thompson’s recommendation of no prison time for Peter Liang. Chin’s killers also did not have to serve any time—their sentence was probation.

It is misguided to argue that Liang should not be held accountable for his actions, simply because of his Chinese descent and the fact that other officers have been treated as above the law—as the DA’s recommendation reconfirms that officers, regardless of race, too often are.

Juan Gonzalez poignantly noted the story of Edwin Smith as a clear juxtaposition to Liang. A black homeless man in New York, Smith was trying to stay warm in an abandoned building one night with his girlfriend and unintentionally caused a fire that killed a firefighter. Like Liang, he was convicted for manslaughter, but he was sentenced to 15 years in prison.

Our communities should join others to fight for accountability and end the broader systemic racism that includes disparate treatment faced by Chinese and other communities of color. Many of us are engaged.

We have a system that too often fails to hold officers accountable, while dispensing harsh and unfair treatment to black and low-income communities of color at every step of policing and the criminal-justice systems. Any efforts to rationalize reduced accountability in the killing of Akai Gurley undermine the fight for accountability in cases when police kill Asian community members (a byproduct of the structural anti-black racism within policing systems)—like Yong Xin Huang in New York in 1995, Cau Bich Tran in San Jose in 2003, and others.

We will all be safer when all police officers, regardless of race, are held accountable for their actions. There is an opportunity for Chinese and Asian communities to engage in substantive conversations that more critically and openly examine structural racism. Absolving Peter Liang from his responsibility in the death of Akai Gurley does not demonstrate fairness, and we shouldn’t let misguided calls for ethnic or pan-Asian solidarity advance this wrongheaded line of reasoning. DA Thompson did a disservice to justice and to the promotion of an important dialogue on racism, but we must not allow either to fall by the wayside.