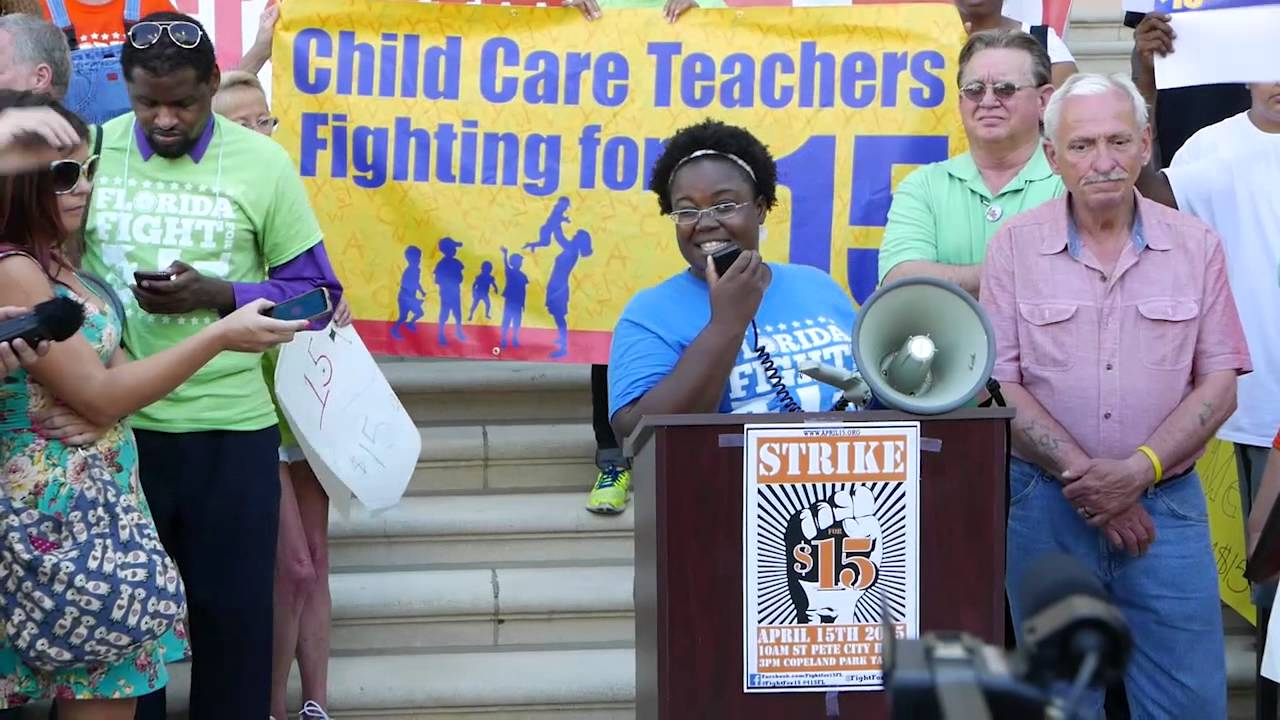 Childcare workers rally with Fight for 15 in St. Petersburg, Florida. (Fight for 15)

Dawn O’Neal teaches preschoolers how to count, tenderly introducing young minds to basic arithmetic at her daycare center in Atlanta. But on Tuesday, she and fellow childcare workers will gather outside the classroom, in the streets, to educate politicians about why, for all the work they put into raising the nation’s children, their wages still don’t add up.

While she works to make her classroom environment as carefree as possible for kids, grown-up stresses surround them. In a sector where the cost of care is rising yet wages have stagnated for over a decade, she knows that, after more than 15 years in the field and still earning just $8.50 an hour, neither her family nor those of her students are getting what they deserve.

“We’re struggling,” O’Neal says. “We’re taking care of other kids all day long, and then when we come home we can’t even take care of our kids.” Sometimes, when parents can’t afford the fee, she adds, the center will take their children anyway, just so they can work. “It’s hard on the teachers, and it’s hard on the parents,” she says.

Tuesday’s protests in Atlanta and hundreds of other cities will launch the Fight for $15’s yearlong campaign leading up to Election Day. The SEIU-backed movement to press nationwide demands for a living wage and a union, now includes their demand as voters, that politicians commit to raising pay and working conditions.

Earning typical hourly wages of about $10.30, childcare workers earn some 40 percent less than the nationwide median wage, well below typical wage range in comparable professions, according to the left-leaning think tank Economic Policy Institute (EPI). About one in seven childcare workers lives below the official poverty line. In many regions, preschool and childcare workers earn a fraction of what’s required for a minimally decent standard of living. In Atlanta, childcare workers like O’Neal may earn just short of what is needed to support a local family of one.

But O’Neal proudly raised four kids as a childcare worker. She manages costs by residing in housing about two hours away from the affluent neighborhood where she teaches. She staggers bills to help make rent and purchase groceries. Since the educational requirements for her field are rising, O’Neal needs a full degree in childcare, instead of her current associate’s credential, to move up from being an assistant teacher to a higher-paid position heading her own classroom. But she can barely afford the gas for her daily commute, much less the tuition she’d need for another degree.

Many of O’Neal’s fellow teachers who are raising young children end up priced out of preschool themselves. Measured against a median preschool workers’ earnings, preschool costs range from 20 percent of annual income in Georgia to more than half of a year’s salary in Washington, DC.

In an education system rife with “high stakes” tests, surprisingly little attention is devoted to the high stakes of childcare workers’ labor conditions. Shepherding preschoolers through the rudiments of social skills and their ABCs is a sensitive, skilled craft that suffers when the teacher is going hungry, facing foreclosure, or pressured to work when sick because she can’t get a day off. Compared to other education professions, early childhood sectors have relatively weak union representation, and only 15 percent of workers have employer-provided health insurance. With turnover rates as high as 30 percent, an endemically unstable, overstressed workforce might undermine students’ social and cognitive development.

In contrast to the impossible financial math of eking a livelihood out of her unlivable wages, O’Neal has developed a different calculation for fixing the crisis of unaffordable, undercompensated childcare—starting with the government. State and federal funding provides crucial, if currently inadequate, financial support for childcare programs. Though she works at a private center now, she believes the public providers she’s worked for in the past, such as the federal Head Start program—were better managed and funded. She wants to spread that model to provide both quality care and decent work.

In other words, filling the care gap requires a government that cares as well. “It’s time for government to step in and do something about it,” O’Neal says. “If they can spend money on militarizing the police… giving things to big corporations, they can certainly spend money on childcare.”

A few lawmakers have recently responded by introducing House and Senate resolutions in support of comprehensive funding of universal daycare and preschool, which crucially incorporate a $15 hourly base wage for childcare workers.

On Tuesday, she’ll join thousands of home health aides, fast-food workers and other low-wage workers in rallies and strikes, rallying to make their 2016 vote count toward a living wage. “$15 would help us out so much. But that’s not only my struggle,” she says. “It’s my neighbor’s struggle next door…. The mom, she has three kids and she works at Burger King, she’s struggling to feed her kids.”

O’Neal sees poverty, the need for childcare, and family instability as interlinked crises in the black community: “There are people that are in need, there’s people that are angry because they’re working so much that they can’t afford to spend time with their children.” Ensuring economic security supports caregiving at home and in school. “If we had a livable wage, if we had unions that we know would back us on these jobs, we would be able to spend more time with our children, we would be able to put back into the community,” she says.

While some might dismiss childcare labor as just a form of “babysitting,” she says, “We’re early childhood educators, and we are educating America’s greatest asset…. we deserve to be able to take care of our families just as well as we take care of the children in the classroom.”

On the campaign trail, politicians have aired perfunctory promises to address the challenges that parents face balancing childcare and work. But when childcare is your work, you get a different perspective on what it takes to raise a child. If we demand respect for working parents’ need for childcare, we can’t neglect the fact that childcare workers have families, too.