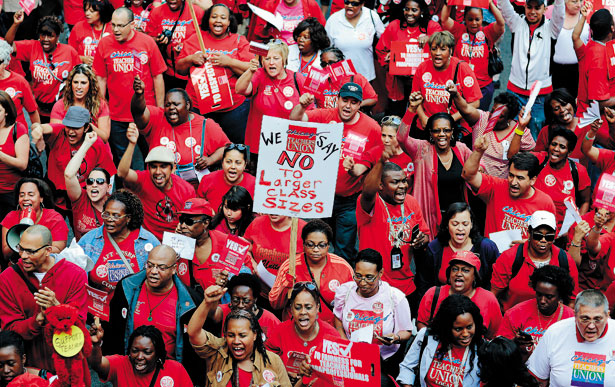 “Education then, beyond all other devices of human origin, is a great equalizer of the conditions of men—the balance wheel of the social machinery,” wrote Horace Mann in 1848, when the great proponent of public education outlined a premise that remains at the heart of every progressive vision for this country.

Unfortunately, 167 years after Mann made his case, many politicians who position as “progressive” are insufficiently committed to the cause of public education. Some of the crudest education cuts and “reforms” have been implemented by Democrats who often go as far—even further—than conservative Republicans in embracing the wrong thinking of those who would undermine public education with “charter” experiments, voucher schemes and privatization plans.

It is too simplistic to assume that the debate over public education plays out only between Democrats on one side and Republicans on the other. In fact, there are important debates over education that need to be had within the Democratic Party. Until Democrats are solidly supportive of public education, it is difficult to see how they will effectively counter Republicans like Jeb Bush and Scott Walker, who have aligned themselves with the billionaire proponents of an “education reform” movement that is all about deforming and diminishing the promise of the great equalizer.

This debate has already erupted in a number of cities and states. In 2014, for instance, much of the support for law professor Zephyr Teachout’s exceptionally strong Democratic primary challenge to New York Governor Andrew Cuomo came from teachers and their allies in the burgeoning movement to defend public education.

Now, an ever clearer test is playing out in Chicago.

The lines of division could not be starker in next Tuesday’s Democrat-versus-Democrat runoff contest. Mayor Rahm Emanuel, an advocate of high-stakes testing and the charter-school “reforms” favored by conservative Republicans and the Wall Street wing of the Democratic Party, faces an energetic challenge from Cook County Commissioner Jesus “Chuy” Garcia, an outspoken champion of teachers and neighborhood schools who has aligned with progressive unions and grassroots activist groups.

With all the advantages of incumbency, a massive fund-raising advantage and political connections that extend to the White House, Emanuel remains the front-runner in the Chicago contest. But the fact that there is a race at all—the first runoff election since the current system for electing Chicago mayors was created—owes everything to the evolving debate over education policy.

A case can be made that Emanuel would not have faced serious competition had he not ordered the closing of dozens of neighborhood schools, as part of an ongoing fight with public-education advocates and the Chicago Teachers Union. The mayor earns praise from national groups such as Democrats for Education Reform, which bluntly declares, “We believe in empowering mayors to lead urban school districts…”

While there are plenty of Democratic mayors who have embraced that approach, Garcia says Chicago needs to go in a different direction. He argues for an elected school board—which Chicago currently lacks—as part of an expanded commitment to public schools.

“My program involves giving the school system back to the people through an elected school board; reducing to the barest legal minimum the plethora of high-stakes, standardized tests by which we falsely judge schools, students, and teachers; placing a moratorium on further charter schools; expanding public education to include pre-kindergarten and even earlier; and reducing class size, which is one of the largest in the state,” explains Garcia, who declares that “it is necessary to change course dramatically from the so-called ‘reforms’ offered by Mayor Emanuel.”

That stance, among others, has won Garcia the enthusiastic support of the Chicago Teachers Union, which has wrangled with Emanuel so frequently that CTU President Karen Lewis briefly considered challenging the mayor. Lewis was sidelined by illness last fall, but she is now Garcia’s most enthusiastic backer, appearing at the challenger’s side and declaring that “if he is elected as our mayor, I know he will work for all of our citizens, not just the corporate elites and special interests who seek to privatize our public assets.”

On Saturday, Lewis and teachers and community leaders from across the city will participate in “march to the polls” to promote early voting for Garcia. They’ll be joined by the Rev. Jesse Jackson, Congressman Danny Davis and Dr. Cornel West, as well as Newark Mayor Ras J. Baraka.

Recently elected in Newark, Baraka has taken the lead in arguing for a new vision of urban education that fights for and funds public schools—rather than beating up on them. “There are many parallels between Chuy’s campaign and my own,” says Mayor Baraka. “I see the same type of grassroots, people-powered campaign in Chicago right now as I ran in Newark last year. Chuy Garcia will return control of public schools to the communities they serve. Chicago, Newark, and so many cities around this country face a common struggle against corporate interests that want to undermine public education and silence dissenting voices in the community.”

Baraka’s point is well taken. Too many Democrats are either wrong on education issues, or so vague in their stances that it is tough to determine whether they are right or wrong. In contrast, the new mayor of Newark has been unapologetic and energetic in arguing for public schools.

Garcia has been equally unapologetic and energetic—and specific. With a vision of “progressive mayors across the country” working with teachers and parents to strengthen neighborhood schools and services, the Chicago challenger sees his run as part of a broader effort to reframe the debate over public education in America.

That new frame stops looking for ways to blame teachers and starts recognizing the need to address the pressures that make it difficult for even the best teachers to do their jobs.

Garcia decries the emphasis on high-stakes testing in public schools. “When it comes to standardized, high-stakes testing, our kids are over-tested and under-educated,” says the candidate, who argues that “Making everything dependent on test scores in two subjects simply builds in larger failures. Ultimately it causes teachers, schools and entire systems to narrow educational goals and teach to the tests—or cheat, which we’ve seen recently around the country and in Chicago in past years.”

A veteran city, county and state official whose progressive political roots go back to the days when former mayor Harold Washington was battling the Daley machine, Garcia is equally blunt about the flaws and failures of charter-school experiments. Charters “long ago ceased offering anything new that public schools could utilize, particularly since teachers unions in today’s world have reformed significantly, focusing more on education than protecting the jobs of teachers,” says Garcia, who says that “charters drain increasing amounts of public money while paying staff lower wages.”

But Garcia’s core advocacy goes back to the values championed by the pioneering advocates for public education, who argued it was an underpinning of democracy. It is this faith in democracy that animates Garcia’s candidacy. He believes in empowering students, teachers, parents and communities by resting power with an elected school board.

“One of my first acts as mayor will be to go to Springfield and ask the legislature to revoke the mayoral control legislation and let Chicago take its place with the rest of Illinois by having an elected board,” says Garcia. “We are the only school district in the state with an appointed, not an elected, school board, thanks to state legislation passed in 1995—which I voted against as state legislator. This is the board that closed our schools and cut the education budget, following Mayor Emanuel’s orders. Would this have happened with an elected board, responsible to the citizens?”

To a greater extent than a lot of Democrats, including Rahm Emanuel, “Chuy” Garcia gets that the fight for public education is about democracy—and about the rights that are essential to democracy.

“School systems are perhaps the main governmental bodies touching the lives of a majority of our citizens. That’s why I believe an elected school board is a constitutional right,” argues Garcia, in one of the core statements of his campaign. If the state legislature fails to revoke mayoral control of the Chicago school system, he promises, “I will file a federal voting-rights lawsuit based on the Constitution and civil rights laws.”

A mayor waging that fight would earn national attention and, perhaps, usher in a whole new debate about public education. That’s a debate that Democrats need to have if there is to be hope that the great equalizer of the conditions of men and women might finally be the balance wheel of our social machinery.