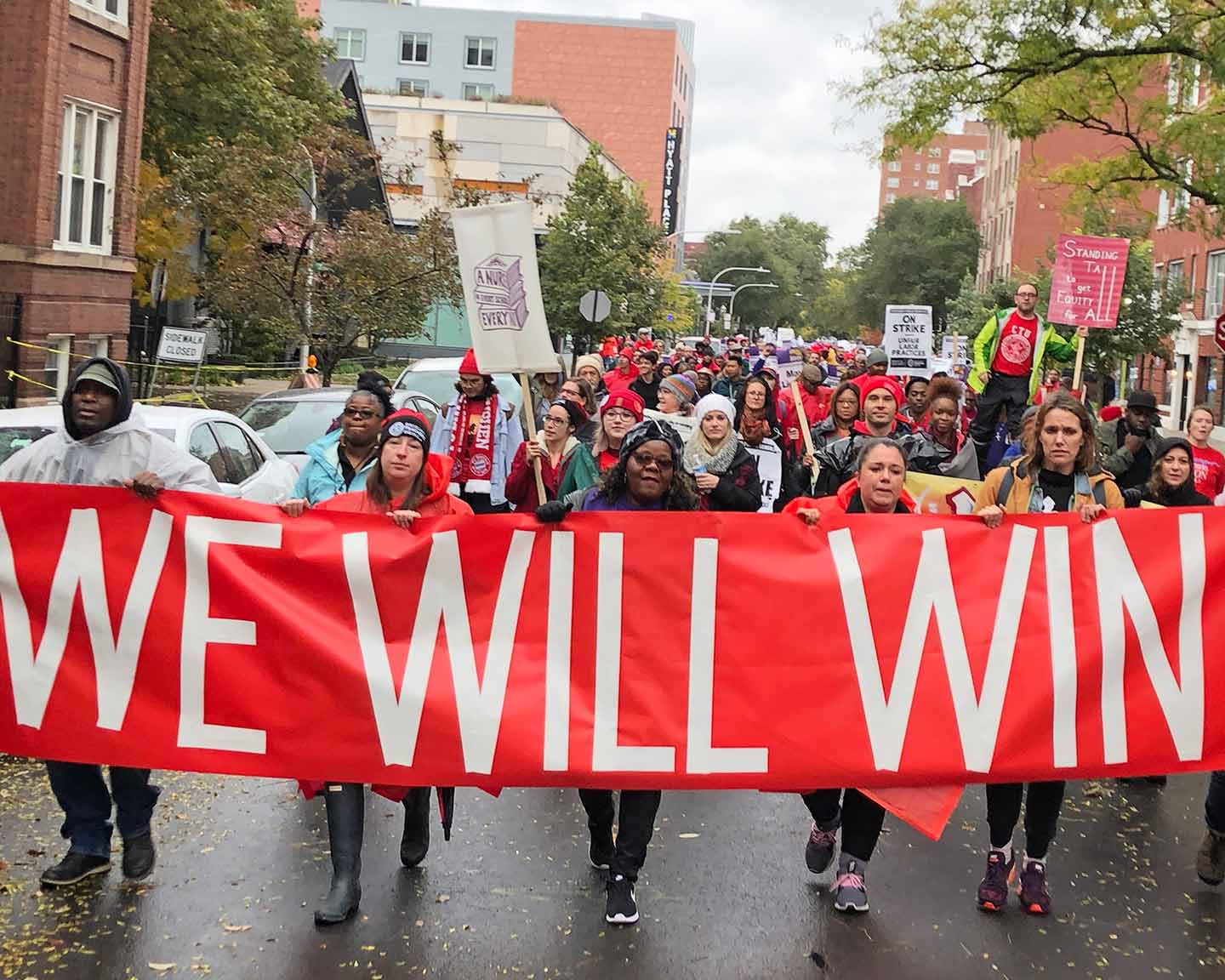 The slogan on the banner that led many of the marches during last week’s Chicago teachers strike told the story: “When we fight, we win.” Not always, not everything, not yet enough to meet the dire need. But a whole lot more than when we don’t fight.

The two-week strike by the Chicago Teachers Union (CTU) ended last week with a tentative agreement and a compromise over making up lost school days. Service Employees International Union (SEIU) Local 73 had walked out of schools in a first-ever joint strike with the CTU—its 7,500 special-education classroom assistants, custodial workers, bus aides, and others won a new contract a few days before the teachers and ratified it last week. The CTU’s 25,000 members will vote on their agreement in a week’s time.

The tentative agreement adds up to $1.5 billion in concessions to the teachers’ demands over five years. But the even bigger news is where the money will go. By fighting, Chicago’s educators didn’t just win for themselves. They won for students, parents, and communities across working-class Chicago.

From the start of the contract battle, the CTU set its sights not just on better pay and benefits but also on a substantial down payment on “the schools Chicago students deserve,” the slogan of the union since its historic 2012 strike. In defiance of a state law that restricts the CTU—alone among all teachers’ unions in Illinois—to mainly bargaining over wages and benefits, educators put wider demands at the heart of the battle. 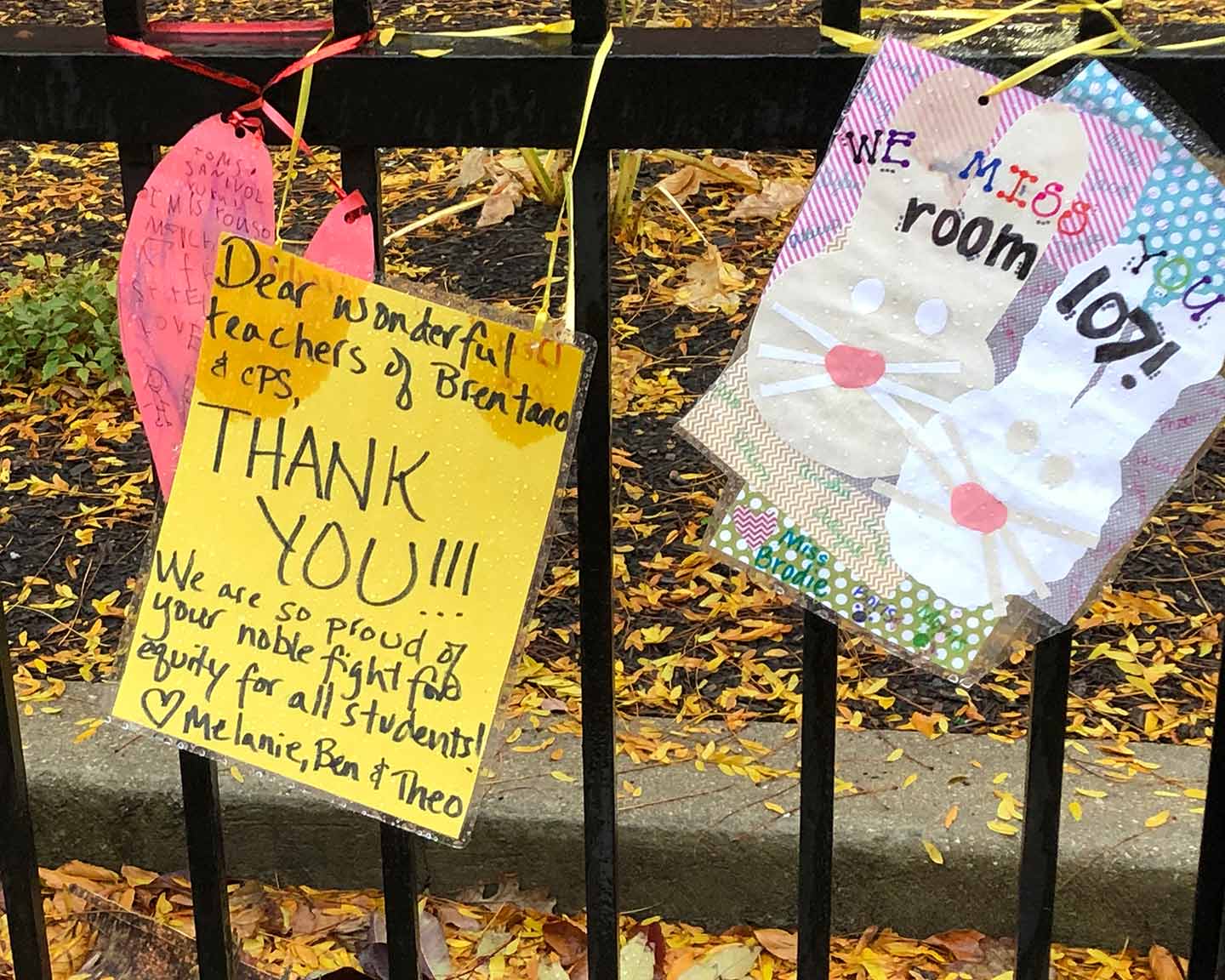 Students, parents, and teachers leave messages for each other on the fence in front of a Northwest Side school. (Alan Maass)

To Edith Navarro, teachers are practicing what she preaches to her third graders at Scammon Elementary School, who are learning now about the struggles of people around the world for access to books and education. “We teach our kids how to fight for their rights,” Navarro said, “so we can’t accept a situation that’s unequal—that isn’t better for every part of Chicago. We have to be united for them.”

Unity won a lot for the CTU: a written commitment for a nurse and a social worker in every school within five years; the first-ever enforceable caps on class size; full-time staff to assist homeless students; more counselors, librarians, and restorative justice coordinators; making schools a sanctuary for immigrant students; even a guaranteed right to nap time in pre-kindergarten classes.

Even so, teachers are bitterly disappointed where the new contract falls short of what they struggled for. Elementary school teachers won’t get badly needed prep time, and the new class-size caps enforce limits that are still far too high. Plus, Chicago Mayor Lori Lightfoot exacted a last revenge by refusing to allow half of the school days lost to the strike to be made up—an effective pay cut for teachers and lost instructional time for students.

Lightfoot, the first black woman to become mayor in Chicago, campaigned for office as a progressive, promising to work for equity in the Chicago Public Schools. But in office, she resisted CTU proposals that she had endorsed as a candidate and hid behind the undemocratic state law to evade teachers’ demands on issues not directly related to salaries.

“Had it not been for teachers walking out of the classroom and demanding that these things be put in writing, I don’t think we would have gotten half of what we have now,” said Sahar Shafqat, an English teacher at Lane Tech High School.

Essentially, the teachers broke through the legal restrictions on bargaining by refusing to come to terms on wages until the city negotiated over staffing, class size, and other questions. “We said that if you’re going to get a contract with us, you’re going to have to open up the dialogue,” said Jen Johnson, chief of staff for the union. 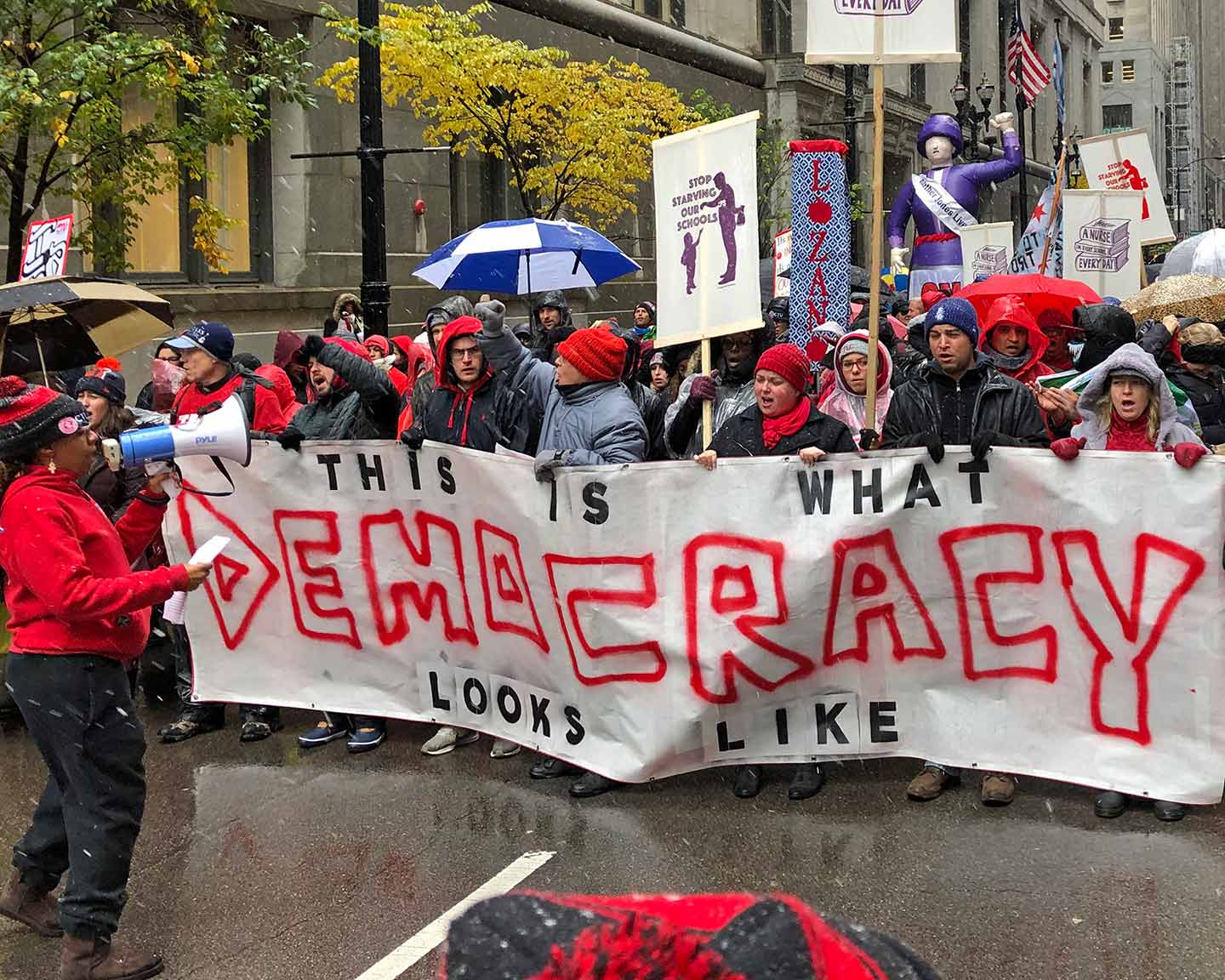 A teachers’ march surrounded City Hall on the last day of the strike. (Alan Maass)

The resulting commitment to increased staffing will make a big difference at Jesse Sherwood Elementary School, where Lida Stewart is an early childhood special-education teacher. With a student body that is over 99 percent African American and Latinx and 96 percent low income, poverty, hunger, homelessness, and violence are day-to-day issues, said Stewart, and the school doesn’t have regular support staff to confront them.

“For us to have a social worker, a full-time case manager, and a nurse in school every day is very important,” Stewart said. “A lot of times, teachers can’t teach—we’re so busy being not only mom and dad but nurse, social worker, and case manager before we can even start teaching, because our kids have so many other needs outside of academics.”

The CTU and SEIU won important victories on economic issues, too. Besides a 16 percent across-the-board wage increase over five years, the unions got extra increases for their lowest-paid members—a badly needed boost for members, who are mostly women of color.

Despite the gains, there is real disappointment among CTU members at the tentative agreement’s shortcomings—especially the five-year term of the contract, a top priority for Lightfoot that will restrict the union’s options in the years to come.

Still, Lightfoot hasn’t heard the last of the Chicago Teachers Union. “No, you don’t get everything, but you reach another level, and you get fit for the next fight,” said Tara Stamps, a teacher at Laura Ward STEM school on the city’s West Side. “This isn’t over with this contract, just like it wasn’t over in 2012. You gain traction, and you gain momentum, and all the while, you keep organizing, and you keep teaching.” 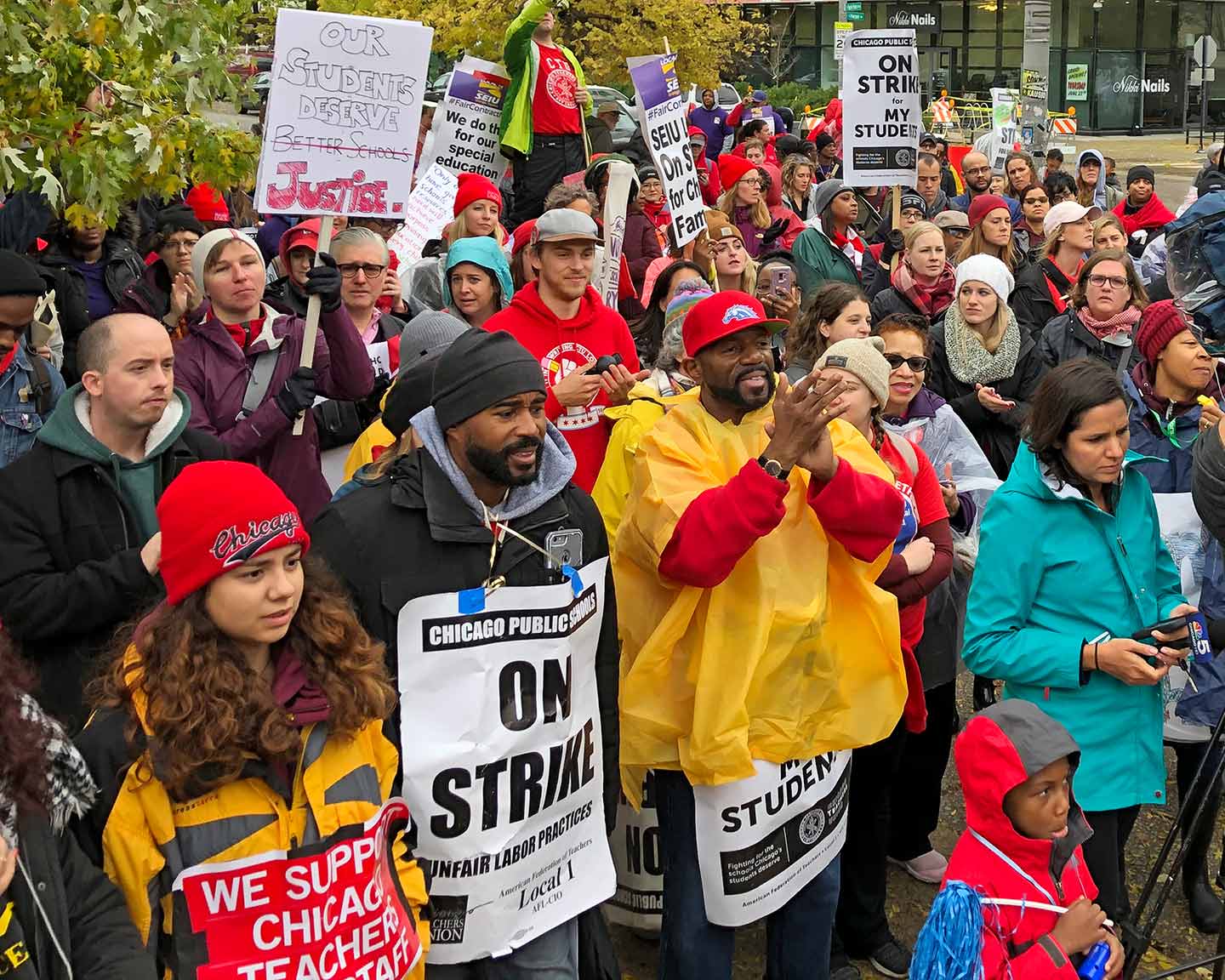 In both the CTU and SEIU, a new generation gained the experience of struggle alongside their veteran coworkers. At a demonstration during the second week of the strike, Lauren Bianchi, a second-year teacher at a Far South Side high school, talked about attending a civil disobedience training organized by the union.

“I saw for the first time in one place a movement of new teacher activists in Chicago,” Bianchi said. “Anyone choosing to become a teacher today knows that teaching is a politicized profession and that we’ll have to fight for our students and public education. Being an activist is part of the job description now.”

Putin’s Support Among the Far Right is Splintering