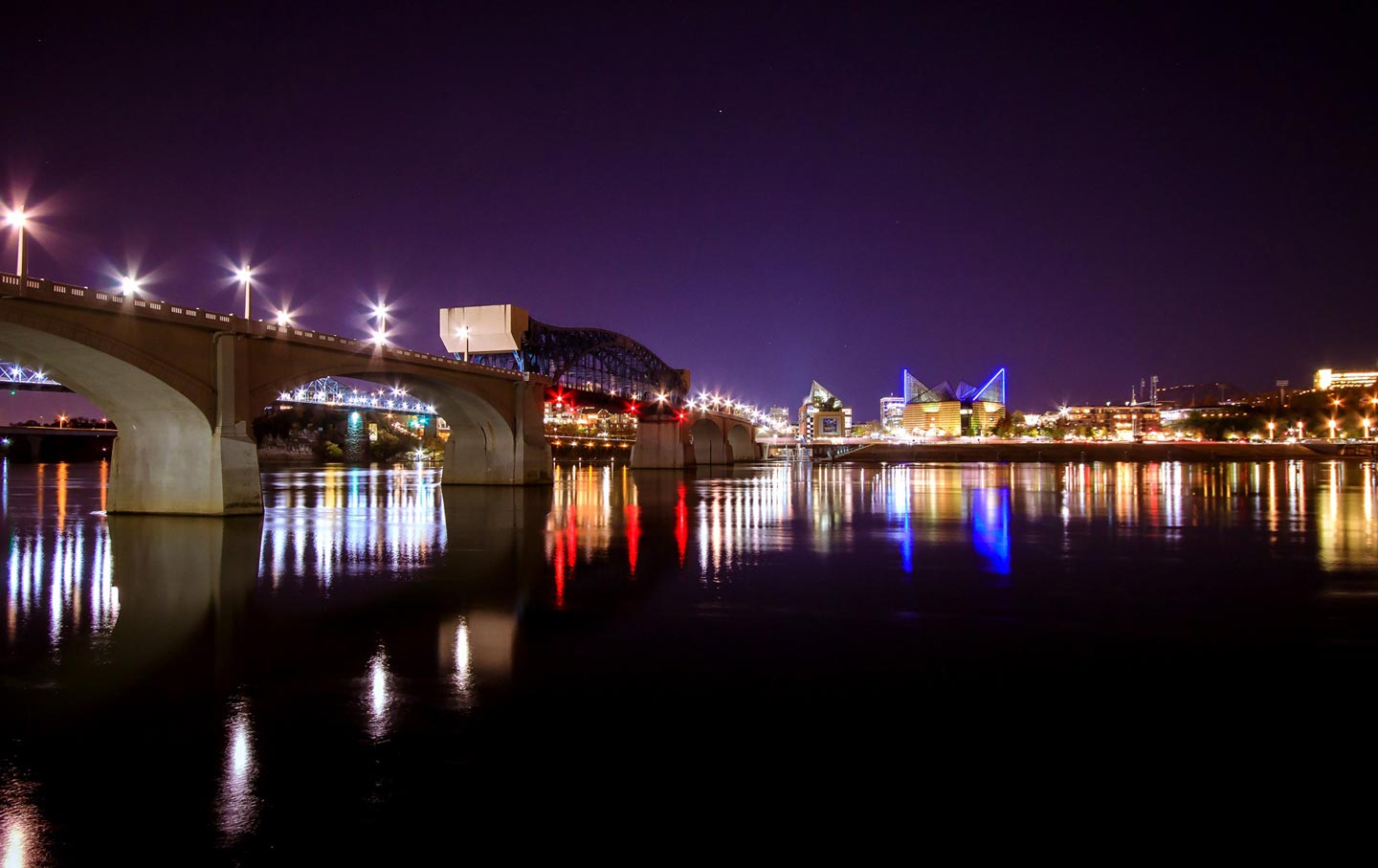 The Tennessee River runs through the city of Chattanooga, Tennessee. (CC)

Downtown Chattanooga looks like a lot of postindustrial cities: wide streets, a mix of old brick buildings, and uninspired ’60s-era brutalism. Except there’s something here that many small downtowns do without these days: people. And many of them are here not just for the usual accoutrements of your average gentrified downtown—fancy restaurants, condos, and concert venues (though those do exist here), but for something more basic, and arguably much more important: the Internet.

In 2010, Chattanooga became the first city in the United States to be wired by a municipality for 1 gigabit-per-second fiber-optic Internet service. Five years later, the city began offering 10 gigabit-per-second service (for comparison, Time Warner Cable’s maxes out at 300 megabits per second). That has attracted dozens of tech firms to the city that take advantage of the fast connections for things like telehealth-app development and 3D printing, and it’s given downtown Chattanooga a vibrancy rare in an age when small city centers have been emptied out by deindustrialization and the suburbs.

The feat was made possible not by a tech giant but by the city’s municipal power company, EPB, which in 2007 set out to modernize the city’s power grid, and realized it could lay every customer’s home for fiber-optic cable at the same time. The near-decade-long experiment has worked: By offering gigabit connections at $70 a month and providing discounts for low-income residents, EPB has taken tens of thousands of customers from the Internet behemoth Comcast, which offers service that is about 85 percent slower at twice the price. EPB now serves about 82,000 people, more than half of the area’s Internet market. It’s been such a success that dozens of other towns and cities have begun their own municipal broadband networks, providing faster and cheaper service than private companies.

“Really, these last two years you’ve seen it pick up steam,” said Christopher Mitchell, the director of the Community Broadband Networks Initiative at the Institute for Local Self-Reliance (ILSR). “It’s just going to keep on spreading.”

Six years ago, Chattanooga was the only city offering publicly owned 1-gigabit Internet service. Today, over 50 communities do, according to ILSR, and there are over 450 communities in the United States offering some form of publicly owned Internet service. Many municipal networks are in small towns and rural areas where private high-speed access is hard to come by. But several dozen are in cities like Chattanooga, where there are other, private options that tend to be much more expensive and slower than what governments have proven they can provide.

Even in places where private companies provide high-speed service, a public Internet option may prove increasingly vital to low-income residents. Internet inequality is a growing issue in the United States: Internet connections are often required for job applications, and seven in 10 teachers assign homework that requires broadband access, according to FCC commissioner Jessica Rosenworcel; yet about one-third of low-income families don’t have high-speed access to the Internet in their homes. Part of the problem is geography: Private Internet companies have little incentive to lay cable to sparsely populated areas. But even bigger cities usually only have one or two options for private Internet access, and so companies like Comcast have little competition and therefore little incentive to make their services affordable for low-income families.

Municipal Internet helps solve both of those issues. Homes, no matter how rural, are usually already wired for electricity by a municipal provider; it’s not too much extra work to follow those lines with fiber-optic cables. Chattanooga did not have to raise taxes or find additional revenue within its budget to pay for its system, which covers many of the area’s most remote houses. The utility simply laid the cable, charged for it, and is now reaping the benefits.

EPB spent about $220 million developing its fiber-optic system, and that’s translated into more than $865 million in economic growth for the city. The network also allows EPB to distribute its electricity more cheaply by monitoring and shutting off areas that are causing problems during storms, finding where repairs need to be made, and routing power more efficiently. And that means EPB can afford to offer the Internet to low-income families at significantly reduced prices, providing any family with children who receive free or discounted lunches at school 100 megabit service (which is several times faster than standard cable-company plans) for $26.99. So far, about 1,800 families are taking advantage of the program.

“We really believe strongly that we should be open and available to everyone and not slow them down,” said David Wade, the chief operating officer of EPB. “Everyone deserves at least 100 megabits.”

Most municipalities don’t have official mandates to make Internet access more equitable, but it seems that equity is nonetheless a central concern of many municipal providers. In Wilson, North Carolina (population: 50,000), the city began laying fiber-optic cables between government buildings in order to better share information, and decided it could expand the service to others. The city now offers free WiFi downtown and has teamed up with two nonprofit after-school programs to provide the Internet to low-income kids. The small city of Sandy, Oregon, doesn’t have discounted plans, but its municipal service nonetheless is cheaper than corporate providers—100 megabits costs only $40 a month.

“Just like we provide parks and trails and other amenities, we also feel like…having great Internet is a reason to live here,” Seth Atkinson, Sandy’s city manager, said.

In 2010, Chattanooga became the first city in the US to be wired by a municipality for 1 gigabit per second Internet.

But the biggest problem facing municipal Internet services isn’t scale or the size of cities; it’s the cable companies. When Chattanooga first started planning its municipal network, Comcast sued, saying the service amounted to unfair competition for the company. It lost the suit, but Comcast and other companies have spent millions of dollars on ad campaigns and donations to local politicians in the hope that municipal providers don’t expand more than they already have. The company has a history of supporting politicians opposed to public Internet service and lobbying state legislatures to pass legislation that prevents cities and towns from offering their services outside of their municipal boundaries. Eighteen states now have anti-expansion laws on the books.

Chattanooga and Wilson have both sought to expand beyond their current service areas, and last year the Federal Communications Commission ruled in their favor, preempting both Tennessee and North Carolina’s anti-expansion laws. But North Carolina’s attorney general sued the FCC in response, saying that “the FCC unlawfully inserted itself between the State and the State’s political subdivisions.” Both Chattanooga and Wilson are now waiting for a final determination before they decide whether to expand their service areas.