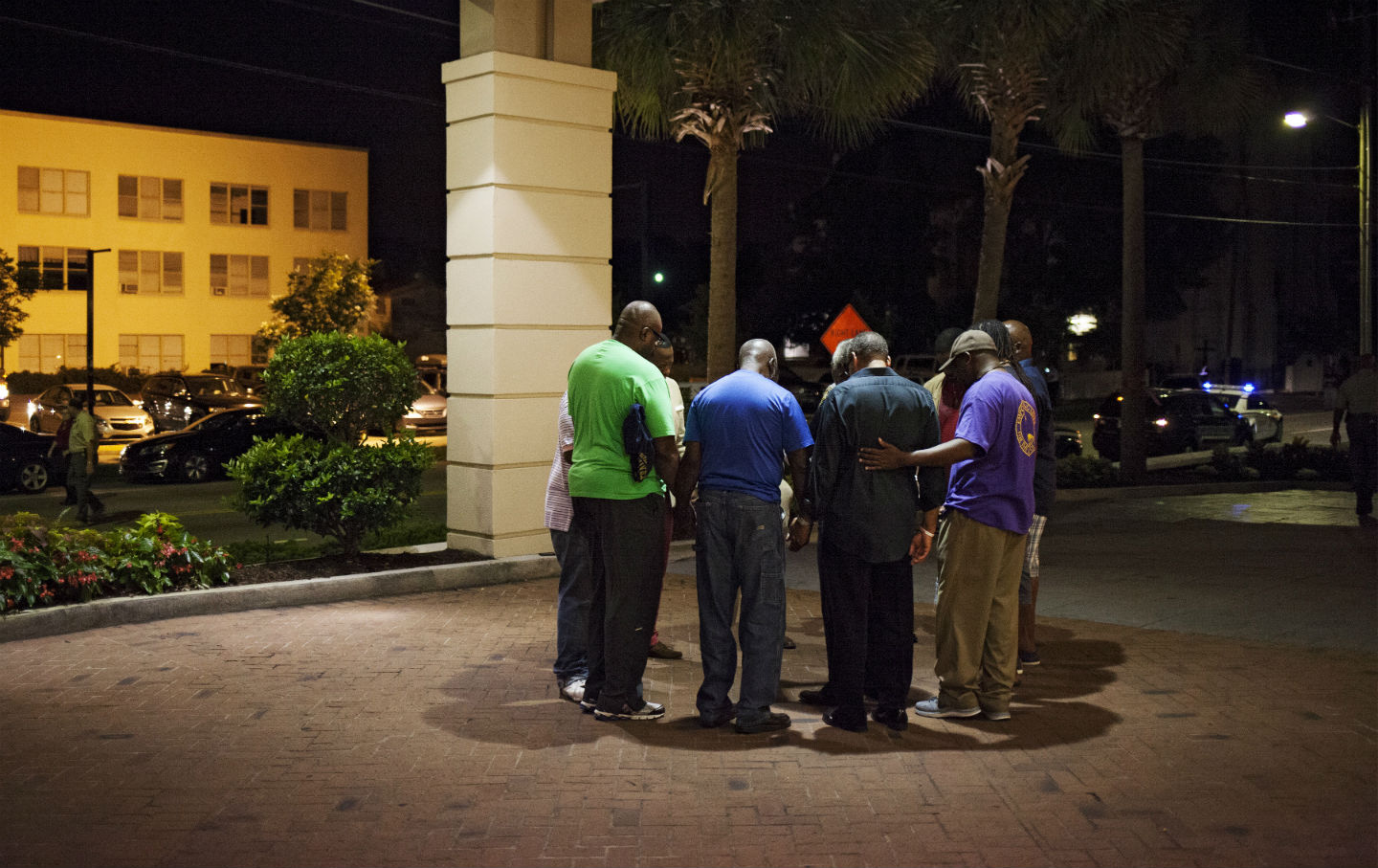 A small prayer circle forms near where police responded to a shooting at the Emanuel AME Church in Charleston, South Carolina, on June 17. (Reuters/Randall Hill)

The more you read about Charleston’s Emanuel African Methodist Episcopal Church, otherwise known as “Mother Emanuel,” the more awe you feel for its historic resilience amidst white-supremacist terror.

This church is now known as the scene of a massacre, which is being investigated as a “hate crime.” Nine are dead, but this institution will not fall. We know this because it has stood tall amidst the specter of racist violence for 200 years. Next year, in fact, was to be the 200th anniversary of the founding of the church. It was 1816 when the Rev. Morris Brown formed “Mother Emanuel” under the umbrella of the Free African Society of the AME Church. They were one of three area churches known as the Bethel Circuit. This means that a free church in the heart of the confederacy was formed and thrived 50 years before the start of the Civil War. It had a congregation of almost 2,000, roughly 15 percent of black people in what was, including the enslaved, the majority-black city of Charleston. Because the church opened its doors to the enslaved and free alike, services were often raided by police and private militias for violating laws about the hours when slaves could be out among “the public.” They were also raided for breaking laws that prohibited teaching slaves to read at Bible study sessions. (It was at one of these Bible study sessions that the shooter opened fire Wednesday night, after sitting among the people for over an hour.)

More violence against the church was to come, as one of its founders was Denmark Vesey. If you don’t know that name, then your US history class failed you. Vesey was born into bondage on St. Thomas Island where he was known as Telemaque. At age 32 in 1799, Vesey won a city lottery of $1,500 that allowed him to buy his freedom from slavery.

But he did not have the funds in this barbaric system to buy freedom for his wife and children. Under patriarchal master/slave law, this also meant that any future children they had would also be in bondage. This was not a state of affairs Vesey was willing to let stand. He looked at Charleston, this majority-black city amidst lush plantations, and planned an insurrection.

In 1822, Vesey was executed on charges of attempting to organize this unprecedented slave revolt. The plan—organized in meticulous fashion and involving thousands of adherents—was to sack the area plantations, liberate the slaves, and sail to Haiti, which had liberated itself from slavery 20 years earlier in its own revolution. The plan was audacious in its scope and remarkable in its reach, and as a result provoked mass hysteria throughout Dixie.

Vesey was one of five insurrection freedom fighters executed on July 2, 1822, two days before Independence Day. The proximity was said to have inspired Frederick Douglass’s speech delivered almost exactly 30 years later on July 5, 1852, “What to the Slave is the Fourth of July?,” where he thundered,

What, to the American slave, is your 4th of July? I answer: a day that reveals to him, more than all other days in the year, the gross injustice and cruelty to which he is the constant victim. To him, your celebration is a sham; your boasted liberty, an unholy license; your national greatness, swelling vanity; your sounds of rejoicing are empty and heartless; your denunciations of tyrants, brass fronted impudence; your shouts of liberty and equality, hollow mockery; your prayers and hymns, your sermons and thanksgivings, with all your religious parade, and solemnity, are, to him, mere bombast, fraud, deception, impiety, and hypocrisy—a thin veil to cover up crimes which would disgrace a nation of savages.

Douglass would later invoke Vesey to recruit for the all-black Civil War 54th Regiment, featured in the film Glory.

Even though Vesey’s plan never extended beyond the planning stages, there was a call by the genteel city leaders of Charleston for even more blood. Thirty more were executed that month, legal mass lynching meant to strike fear in the hearts of Charleston’s black community. What is remarkable is that more were not arrested or executed. This is attributed to a remarkable level of solidarity amongst Charleston’s black population. No one would talk about a popular campaign that turned slaves into active insurrectionists. As part of this campaign—which combined legal and extralegal terrorism—Mother Emanuel Church was burned to the ground. That did not stop people from gathering. It did not end the church.

The violence of this week will not end the church either. The killing of nine people inside Mother Emmanuel calls backward to the 1960s civil rights–era church bombings. It also calls to a present in 2015 where video after video is showing white America a policing system that sees black life as having little value, a present in 2015 where mass media relish black death but do not acknowledge black life, and a present in 2015 where Charleston’s Walter Scott can be calmly shot in the back by police. It also calls to a present where police officials and South Carolina Governor Nikki Haley speak solemnly about the Mother Emanuel martyrs, under that enduring symbol of racist terror the Confederate flag. This demonstrates with utter clarity that the past that Charleston city leaders try to tuck away with a statue of Denmark Vesey amidst the lucrative plantation tourism is far from past.

In moments such as this, few words from the present can resonate as powerfully as the words of Frederick Douglass in his Fourth of July speech when he said,

Oh! had I the ability, and could I reach the nation’s ear, I would today pour out a fiery stream of biting ridicule, blasting reproach, withering sarcasm, and stern rebuke. For it is not light that is needed, but fire; it is not the gentle shower, but thunder. We need the storm, the whirlwind, and the earthquake.

This is not history. It’s a guide to action. This action can be heard in the words of Mother Emanuel Reverend and South Carolina State Senator Clementa Pinckney. The Reverend was one of those killed on Wednesday. In a 2013 speech about “freedom,” Pinckney said, “…sometimes you’ve got to make noise…. Sometimes you may have to die like Denmark Vesey.… Sometimes you have to march…”