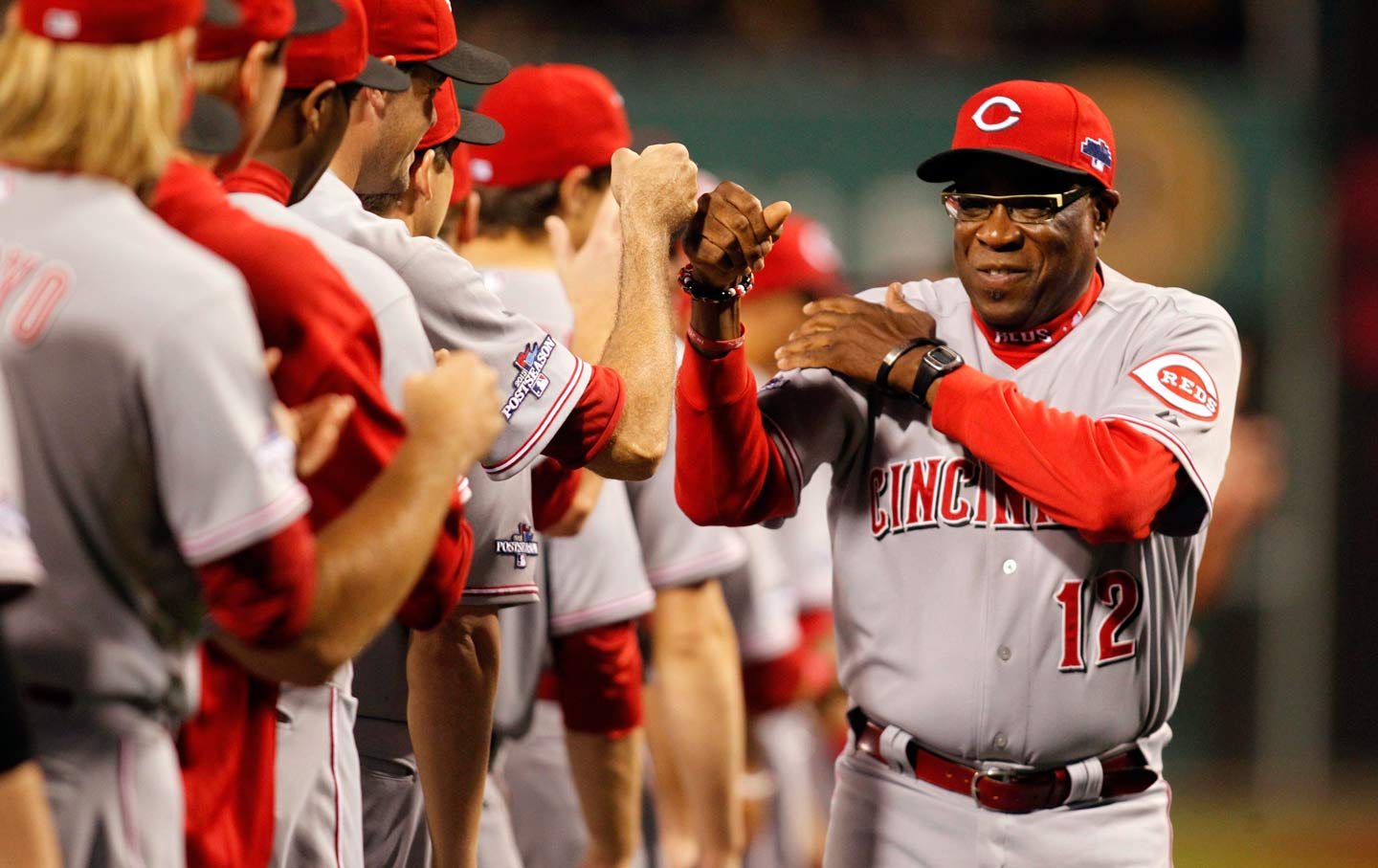 In 1972, just days before his death, Jackie Robinson attended the World Series to commemorate the 25th anniversary of his trailblazing entry into Major League Baseball. Suffering under the weight of failing health and looking decades older than his 53 years, Robinson seized that very public moment to tell a tough truth in front of a television audience of 60 million people. He said that he was grateful to be honored. However, “I’m going to be tremendously more pleased and more proud when I look at that third-base coaching line one day and see a black face managing in baseball.”

One could only imagine what Robinson would say if he was still with us today. At a moment when playoff ratings are on the rise, the sport’s statistics on managerial diversity has not been this grim in decades. We have data that MLB and the baseball media seem loath to discuss. We have data that new commissioner Rob Manfred needs to publicly confront. Now.

Last week the Seattle Mariners fired their skipper Lloyd McClendon, putting the number of African-American managers at a big, round zero. There are those who would shrug this off and link these stats to the declining number of African-Americans in Major League Baseball: now roughly just 8 percent of all players. They would point out that Latinos–largely from the Dominican Republic and Venezuela–have come to be 30 percent of all players on MLB rosters and conclude that the managerial numbers merely reflect this cultural shift. They would be wrong. Perhaps even more shocking than the data on African-American managers is the total number of Latino managers: one. There is Fredi Gonzalez of the Braves… and that is all. This is collectively a mammoth step backwards from just a few short seasons ago. As the 2015 MLB Racial and Gender Report Card by Richard Lapchick and his institute at the University of Central Florida pointed out, there were 10 managers of color as recently as 2009. Lapchick’s managerial grade for MLB, released at the start of 2015, was a D, which now seems like it is due for a downgrade.

If there is a symbol of why that D should be an F, it was the news revealed this week that three-time manager-of-the-year Dusty Baker unsuccessfully cold-called the San Diego Padres to see about their managerial opening. This comes after a full season of Baker making clear to the media that he wants to get back in the game. As Howard Bryant of ESPN pointed out on Twitter, the part of this story that makes you shake your head is the fact that it’s Dusty Baker calling the Padres for an interview, and not vice versa.

The absence of African-American managers perhaps does reflect the much-debated larger patterns of alienation and marginalization from baseball experienced throughout black America. But, given the number of Latino players, many of whom struggle with English as a new language or have had to overcome searing culture shock to make the journey from the baseball academies of the DR to Major League Baseball, the absence of Latino managers is just gobsmacking. It reflects more than the persistence of racist hiring practices or tin-eared executives. It shows above all else that baseball–despite bathing itself in the history of Jackie Robinson–has no affirmative-action policy with teeth. It has nothing like the National Football League’s Rooney Rule that compels owners and executives to interview candidates of color. Let that sink in for a moment: When your racial-justice policies pale in comparison with the NFL, something rancid is happening behind closed doors.

Now that we are in the heart of October, when the spotlight shines brightest, the sport needs to have the courage to face some tough truths: It lacks an organizational commitment to managerial diversity. It lacks–at present–an ownership group with the baseline fortitude of the Steelers Rooney family, willing to stand up and demand change. It especially lacks what yanked the NFL away from an unspoken whites-only coaching carousel: civil-rights attorneys in the tradition of Cyrus Mehri and the late Johnnie Cochran, willing to sue the league back to the Stone Age unless major changes were imminent. This is perhaps what needs to happen if MLB continues to make it patently clear that they won’t go there on their own. As Jackie Robinson said so presciently, “I don’t think that I or any other Negro, as an American citizen, should have to ask for anything that is rightfully theirs. We are demanding that we just be given the things that are rightfully ours and that we’re not looking for anything else.”

Candidates of color have the right to know that they will at least be interviewed for baseball’s managerial openings. Dusty Baker has more than earned the right to not be treated like a 22-year-old college grad cold-calling for jobs. We all deserve the right to enjoy October confident that the ghosts of Kenesaw Landis and his ilk no longer haunt this beautiful game If the sport truly wants to say that they stand in the tradition of civil rights and the memory of Jackie Robinson, then that can’t be done with speeches and commemorations. It has to be earned in the present tense.

It has been an even 40 years since Frank Robinson became the first African-American skipper in Major League Baseball history. It has been 28 years since team executive Al Campanis was fired from the Dodgers for saying on ABC’s Nightline–in what was supposed to be a celebration of Jackie Robinson–that black players “did not have the necessities” to become Major League Baseball managers. It has been 23 years since Cito Gaston became the first black man to manage a team to a World Series title. And now we are all the way back to where we started. It’s time for change: a change many thought had already been achieved. Rob Manfred: You’re up.