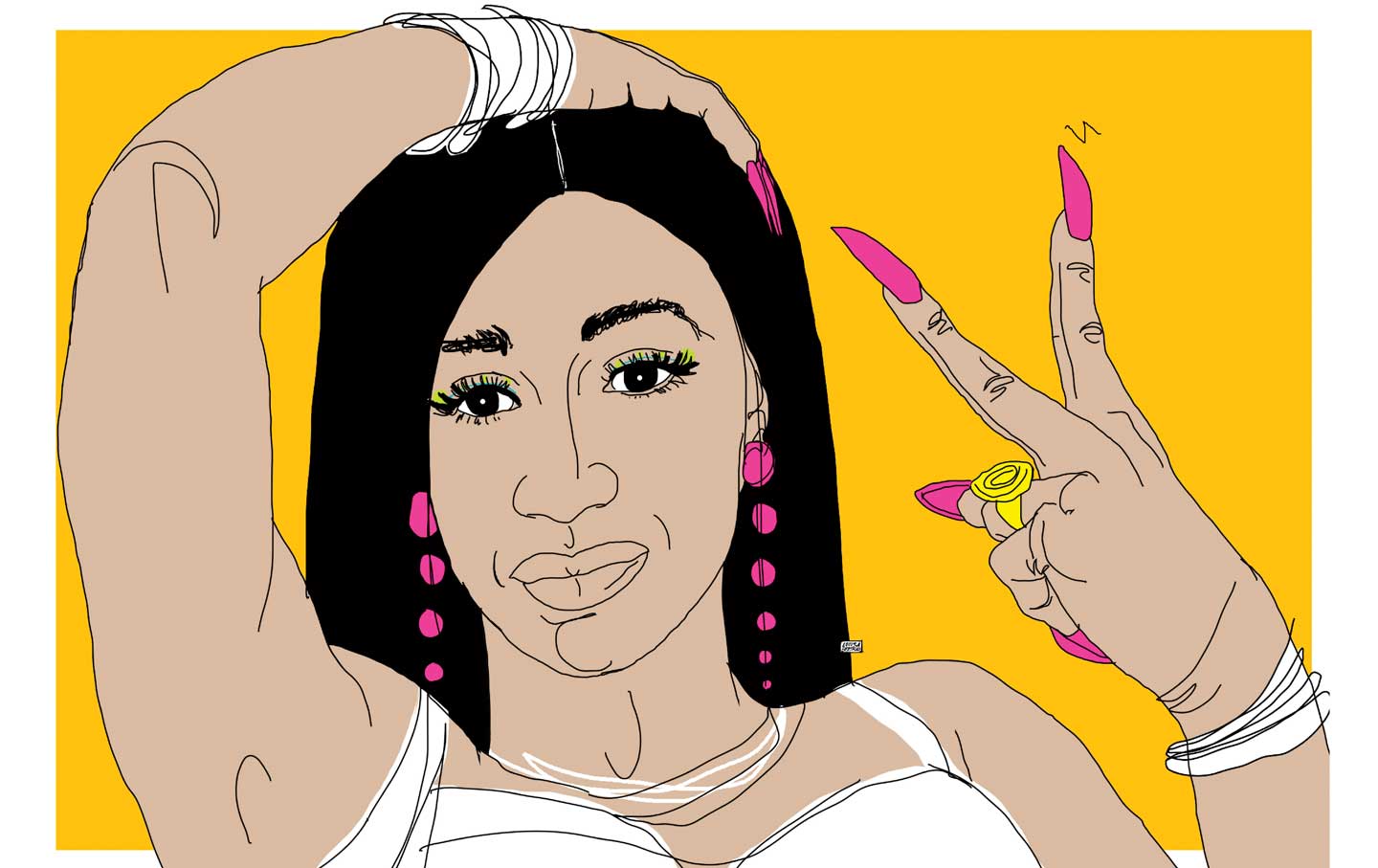 “They gave a bitch two options—stripping or lose,” snarls Cardi B over the dramatic piano pings and hazy synths of “Get Up 10.” It’s the opening line on her debut album, Invasion of Privacy, and a tone-setting declaration that reveals exactly where she’s coming from. For Cardi B, losing was never on the table.

So, as she says next, she took up dancing, “in the club right across from my school.” Much like Meek Mill’s “Dreams and Nightmares (Intro)” from 2012, or Detroit rhymer Tee Grizzley’s “First Day Out” from 2016, Cardi uses the theatricality of the slow-building production to lay out the stakes. When she raps, “I went from rags to riches / Went from WIC to lit / Only person in my fam to see six figures,” it’s difficult not to root for her.

A Bronx native born to Trinidadian and Dominican immigrants, Cardi hit the strip clubs after dropping out of college and being fired from her job as a grocery-store cashier—a decision that also provided the means to leave a toxic relationship. Her bold personality and hilariously blunt rants and one-liners (“A ho never gets cold,” she proclaims in one video) brought her social-media followers in droves, and she parlayed that popularity into a spot on VH1’s Love & Hip Hop: New York. What some would consider missteps, Cardi B has turned into the stuff of stardom, and Invasion is her Odyssey, her own “Binderella” story, as she puts it—a momentous testament to perseverance.

In the modern era of rap, Cardi is perhaps the first woman to achieve pop-culture prominence without the direct assistance of a man. Her omnipresent breakout hit “Bodak Yellow” may take its cues from a song by a male rapper (Kodak Black’s “No Flockin”), but there was no co-signer, no superstar artist offering her a wave to ride or a place to stand next to him in videos. Her historic ascent included earning the No. 1 spot on the Billboard Hot 100 with “Bodak Yellow”—the second woman, after Lauryn Hill, to do so with a solo rap single. Invasion’s debut atop the Billboard 200 makes Cardi the fifth woman in rap to accomplish that feat.

One of the defining features of Cardi B’s music is its unabashed sincerity. In a pop-culture moment where honesty is as much an earnest means of self-care as it is a commodity—appearances are, one way or another, always kept up—Cardi has the audacity to be messily imperfect. It’s what makes her so endearing. Her transparency creates room for the portion of her fans whose stories resemble hers to also feel a small bit of vindication. On the buoyant “Best Life,” which gets a lift from hip-hop’s favorite optimist, Chance the Rapper, Cardi raps: “I never had a problem showing y’all the real me / Hair when it’s fucked up, crib when it’s filthy / Way-before-the-deal me / Strip-to-pay-the-bills me / Before I fixed my teeth / Man, those comments used to kill me.”

She has risen through rap’s ranks with every part of herself out front: her past as a stripper and reality-TV star, her ethnic roots, her Bronx-hood upbringing. No part of her life is off-limits for her own creative expression, and she has thereby become a beacon for all the brown and black girls whose hardships are often considered moral shortcomings and who have spent their lives shape-shifting to meet impossible standards.

“I Like It,” which features an immediately recognizable sample of Pete Rodriguez’s “I Like It Like That,” puts a spotlight on her Latina heritage. The trapped-out salsa beat provides the perfect backdrop, as Latin pop stars J Balvin, who is Colombian, and Bad Bunny, who is Puerto Rican, deliver verses in Spanish. The display of pride only adds to the many layers of being Cardi B. In a recent GQ interview, she admitted that her accent—English is her second language—is one of her insecurities and that she tries hard to suppress it. To many listeners, though, her drawl, the way her vowels elongate and her consonants cut off, is a signature that gives her music more character. And isn’t it often the case that the things we consider flaws are the things that others cherish most in us?

Elsewhere, her adoration for her fiancé, the Migos rapper Offset, suffuses the hook of the album’s second single, “Bartier Cardi.” But some of Invasion’s best moments come when Cardi is playing the role of the woman scorned. With her sights fixed on men who can’t ever seem to get their act together, she unleashes her most memorable lines yet. “Leave his texts on read, leave his balls on blue / Put it on airplane mode so none of those calls come through,” she declares on the ruthless “I Do.” The subject of her ire doesn’t fare as well on the searing “Thru Your Phone.” But by her own admission, Cardi is an “emotional gangsta,” so the aggression finds balance in the vulnerability captured in “Be Careful,” which samples Lauryn Hill’s “Ex Factor”: “You even got me trippin’, you got me lookin’ in the mirror different / Thinkin’ I’m flawed because you inconsistent.”

Two weekends after Invasion’s release, Cardi graced the Coachella stage, dressed in all white and wearing her pregnancy proudly. Like a reminder to those observers who still speak of her as a flash in the pan—and a middle finger to those who have sought to shame her—images from her past flashed across the screen behind her: photos from her dancing days, old Instagram posts, clips from Love & Hip Hop. Taking it a step further, acrobatic pole dancers swung themselves around as she ran through most of her album. (Imagine the breath control it takes to rap a full set in the desert heat while pregnant—to say nothing of dropping it low and twerking.) It felt like the big red bow on a career that has only been propelled by the fuel of naysayers. As Cardi raps on “I Do,” the album’s final song, “They said by now that I’ll be finished—hard to tell / My little 15 minutes lasting long as hell, huh?”n