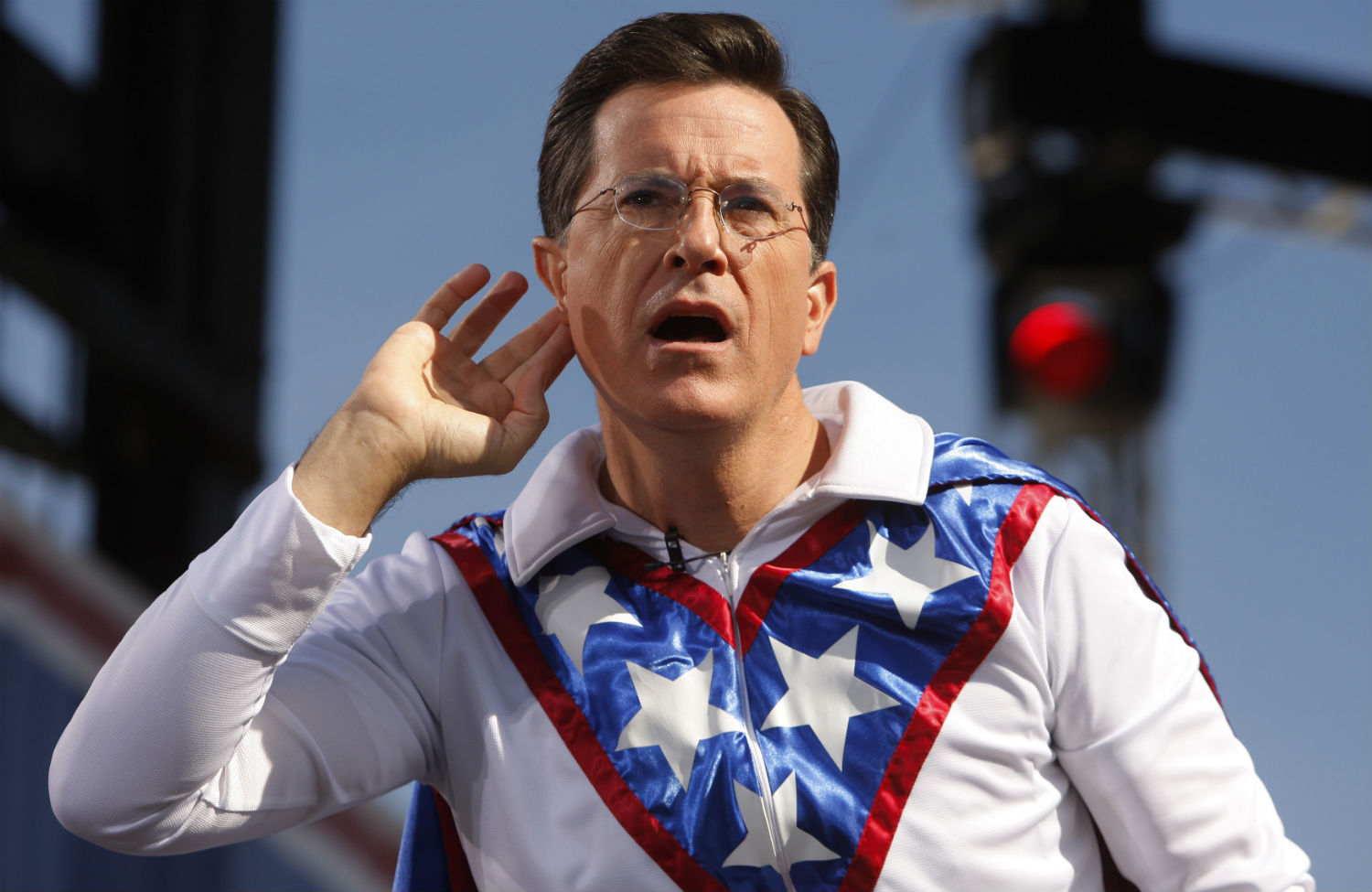 Stephen Colbert gestures during the "Rally to Restore Sanity and/or Fear" on the National Mall in Washington. (Reuters/Jim Bourg)

Perhaps every political generation is fated to be appalled by the one that succeeds it. In the 1960s, longtime socialist intellectuals were horrified by the anarchic energies of the new left. Then some of those new leftists reached middle age and watched, aghast, as new speech codes proliferated on college campuses during the first iteration of political correctness. I was in college then and am now in my thirties, which means it’s my turn to be dismayed by a growing left-wing tendency towards censoriousness and hair-trigger offense.

It’s increasingly clear that we are entering a new era of political correctness. Recently, we’ve seen the calls to #CancelColbert because of something outrageous said by Stephen Colbert’s blowhard alter ego, who has been saying outrageous things regularly for nine years. Then there’s the sudden demand for “trigger warnings” on college syllabi, meant to protect students from encountering ideas or images that may traumatize them; an Oberlin faculty document even suggests jettisoning “triggering material when it does not contribute directly to the course learning goals.” At Wellesley, students have petitioned to have an outdoor statue of a lifelike sleepwalking man removed because it was causing them “undue stress.” As I wrote in The Nation, there’s pressure in some circles not to use the word “vagina” in connection with reproductive rights, lest it offend trans people.

Nor is this just happening here. In England’s left-wing New Statesman, Sarah Ditum wrote of the spread of no-platforming—essentially stopping people whose ideas are deemed offensive from speaking publicly. She cites the shouting down of an opponent of the BDS movement at Galway University and the threats and intimidation leveled at the radical feminist Julie Bindel, who has said cruel things about trans people. “No platform now uses the pretext of opposing hate speech to justify outrageously dehumanising language, and sets up an ideal of ‘safe spaces’ within which certain individuals can be harassed,” wrote Ditum. “A tool that was once intended to protect democracy from undemocratic movements has become a weapon used by the undemocratic against democracy.”

Call it left-wing anti-liberalism: the idea, captured by Herbert Marcuse in his 1965 essay “Repressive Tolerance,” that social justice demands curbs on freedom of expression. “[I]t is possible to define the direction in which prevailing institutions, policies, opinions would have to be changed in order to improve the chance of a peace which is not identical with cold war and a little hot war, and a satisfaction of needs which does not feed on poverty, oppression, and exploitation,” he wrote. “Consequently, it is also possible to identify policies, opinions, movements which would promote this chance, and those which would do the opposite. Suppression of the regressive ones is a prerequisite for the strengthening of the progressive ones.”

Note here both the belief that correct opinions can be dispassionately identified, and the blithe confidence in the wisdom of those empowered to do the suppressing. This kind of thinking is only possible at certain moments: when liberalism seems to have failed but the right is not yet in charge. At such times, old-fashioned liberal values like free speech and robust, open debate seem like tainted adjuncts of an oppressive system, and it’s still possible for radicals to believe that the ideas suppressed as hateful won’t be their own.

“One of the most striking characteristics of ‘60s radicalism was its aversion to liberalism,” wrote Alice Echols in Daring to Be Bad, her history of radical feminism. “Radicals’ repudiation of liberalism was not immediate; rather, it developed in response to liberalism’s defaults—specifically, its timidity regarding black civil rights and its escalation of the Vietnam War.” Something similar, albeit on a much smaller scale, happened after Bill Clinton ended welfare as we know it, and it’s happening now, as economic misery persists under Barack Obama. There’s disenchantment not just with electoral politics, but with liberal values as a whole. “White liberal” has, once again, emerged as a favorite left-wing epithet.

At times like this, politics contract. On the surface, the rhetoric appears more ambitious and utopian than ever—witness, for example, the apparently sincere claim by Suey Park, creator of the #CancelColbert hashtag, that Twitter activists intend to “dismantle the state.” But at the same time, activism becomes less about winning converts and changing the world and more about creating protected enclaves and policing speech. As the radical cultural critic Ellen Willis wrote in 1997, at another moment of widespread left-wing illiberalism, “It’s the general repressiveness of the social climate that encourages moves to ban offensive speech or define any form of sexual oppression in the workplace as sexual harassment. The main effect of these maneuvers is to foment confusion, cynicism and sexual witch-hunts, trivialize sexual violence, and legitimize conservative demands for censorship—while at the same time ceding the moral high ground of free expression to the right.”

There’s a cure for this sort of thing, though it’s worse than the disease. When the right takes power, the left usually discovers the importance of unfettered speech. In the 1980s, with conservatives leading a crusade against the National Endowment for the Arts for funding projects deemed anti-Christian and pornographic, tolerance no longer seemed quite so repressively bourgeois. The same was true during the Bush administration, when opposition to the Iraq War got Phil Donahue fired from MSNBC and the Dixie Chicks pulled off radio playlists nationwide. That’s why the Colbert Report was so cathartic when it first appeared—his relentless mockery cut through the bombastic jingoism, the right wing political correctness, that was stifling us.

It’s no surprise, of course, that right-wingers like Michelle Malkin, author of a defense of Japanese internment, glommed on to the recent anti-Colbert campaign. Anti-liberalism is, after all, supremely useful to the right. Some day president Paul Ryan or Ted Cruz or Rand Paul is going to be sworn in, and an ascendant, empowered conservatism will once again try to curtail dissent in pop culture and academia, just as it always does. Public art won’t be taken down because it’s considered triggering—it will be taken down (or covered up) because it’s considered indecent. There might be another #CancelColbert campaign, but it won’t come from the left. Maybe people will be ashamed, then, that this one did.