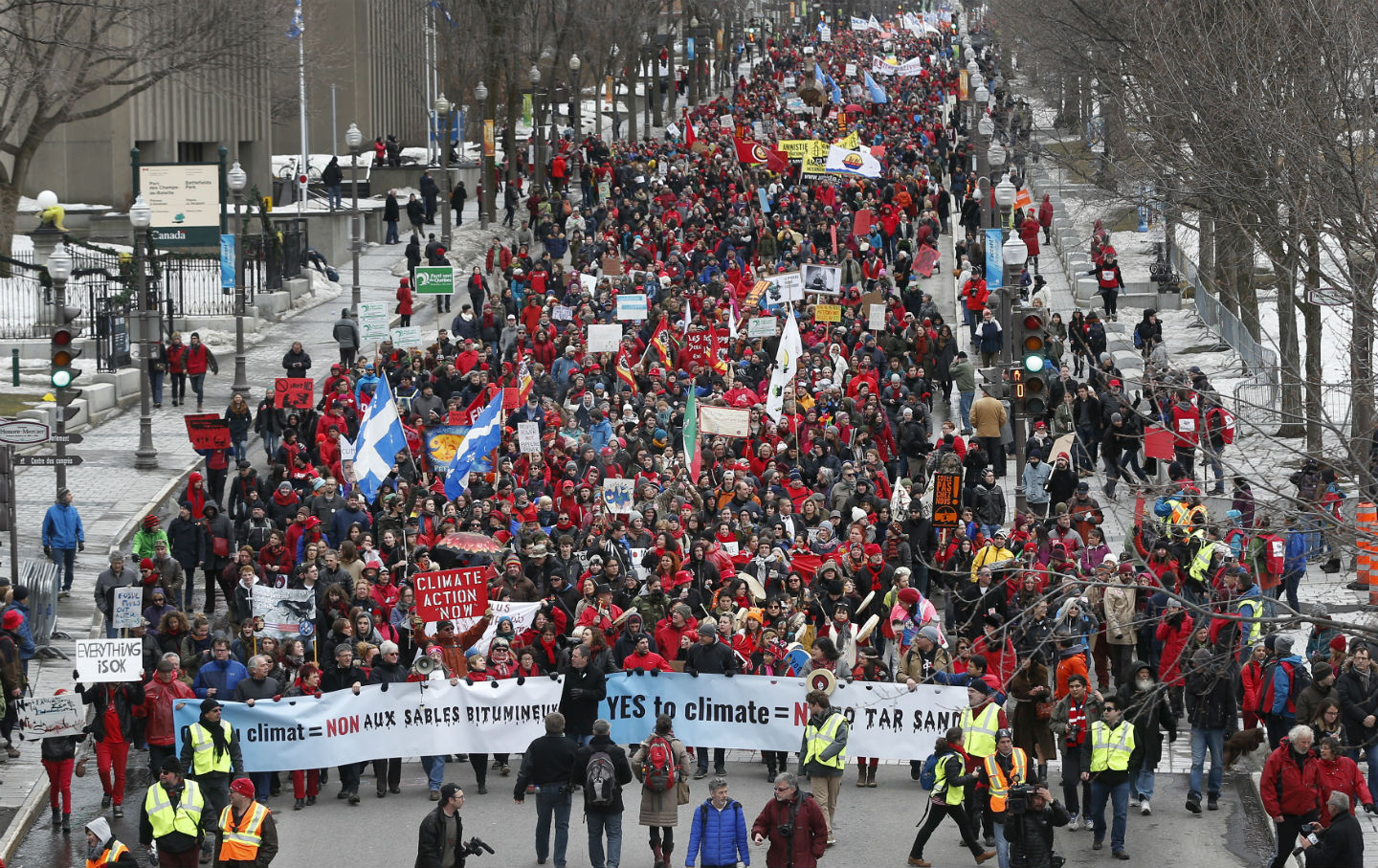 People protest against climate change during a demonstration in Quebec City this April. (Reuters/Mathieu Belanger)

This is an edited version of a speech that Naomi Klein gave on May 21 in downtown Toronto, at a press conference announcing the upcoming March for Jobs, Justice and the Climate on July 5. Video of Klein’s full speech is also included below. It was originally posted at http://thischangeseverything.org/

I’ve had the incredible privilege of traveling around the world and meeting with activists, labor unions, and politicians who are focusing on climate change. I want to tell you that that the coalition of groups we’re witnessing being assembled here in Canada is unique: organizations representing the most marginalized people in Toronto; First Nations who are our water and carbon keepers; environmentalists waging inspiring divestment campaigns; and the trade-union movement, including the country’s largest private-sector union representing workers at the heart of the fossil-fuel economy. We understand that we have key differences, but we also understand that what unites us is greater.

That’s why we’re coming together in Toronto on July 5 for a march for jobs, justice, and climate action. What you’re seeing are the first steps towards a new kind of climate movement. It’s a climate movement that recognizes that time is too short to allow our divisions to keep us from building the kind of coalitions that will safeguard life on earth.

We’re tired of the huge physical costs of digging up and burning this much carbon. Tired of the polluted rivers, the exploding oil trains, the extreme weather linked to climate change. We are tired, too, of the merger between our government and the extractive sector.

Tired of having a prime minister who bullies other nations into taking our oil and building our pipelines when they don’t want them.

Tired of a Department of Indian Affairs that pushes relentlessly to extinguish Indigenous rights in order to pave the way for more mines and more pipelines.

Tired of a Department of Foreign Affairs that acts as an adjunct of a mining industry that’s infamous from Guatemala to Greece for its violations of human rights.

Tired of our “national interest” being equated with a sector whose business model is to dig up more carbon than is compatible with a stable climate.

Now that the price of oil is low, we can see that the price of all this is simply too high. For a decade, the Harper government has told Canadians they have to choose between a healthy economy and stable climate—and as a result, we are ending up with neither.

The people of Alberta, the epicenter of the fossil-fuel roller coaster, just voted to get off this reckless ride. And many other Canadians are ready to join them.

But we want more than the politics of rejection. The politics of “anything but.” Because most of all, we’re tired of being tired and we’re ready to be inspired.

We look around the world and we see that a far better economy is possible while taking serious action on climate change. We see that in Germany, a dramatic transition to renewable energy is underway and it has created 400,000 jobs. It is also bringing control over energy back to hundreds of towns and cities, promising to strengthen democracy and generate much needed revenue.

A few weeks ago, on Earth Day, New York Mayor Bill de Blasio announced his vision for climate justice in his city, which he said would bring 800,000 people out of poverty by 2025 by combining green projects with a higher minimum wage, expanded affordable housing, and investments in public transit that will reduce commute times for the city’s poorest residents.

We’ll see if he pulls it off, but every day it is becomes clearer that it is possible to solve our most pressing economic and environmental crises at the same time.

We can do this and much more in Canada—but we lack the leadership.

That’s why you see the slogan here on these panels for the July 5 march: Jobs, Justice, Climate Action. We don’t just want off this roller coaster. We’re ready for the next economy. And we know the leadership isn’t going to come from the political class, so it’s going to have to come from below.

See you in July!