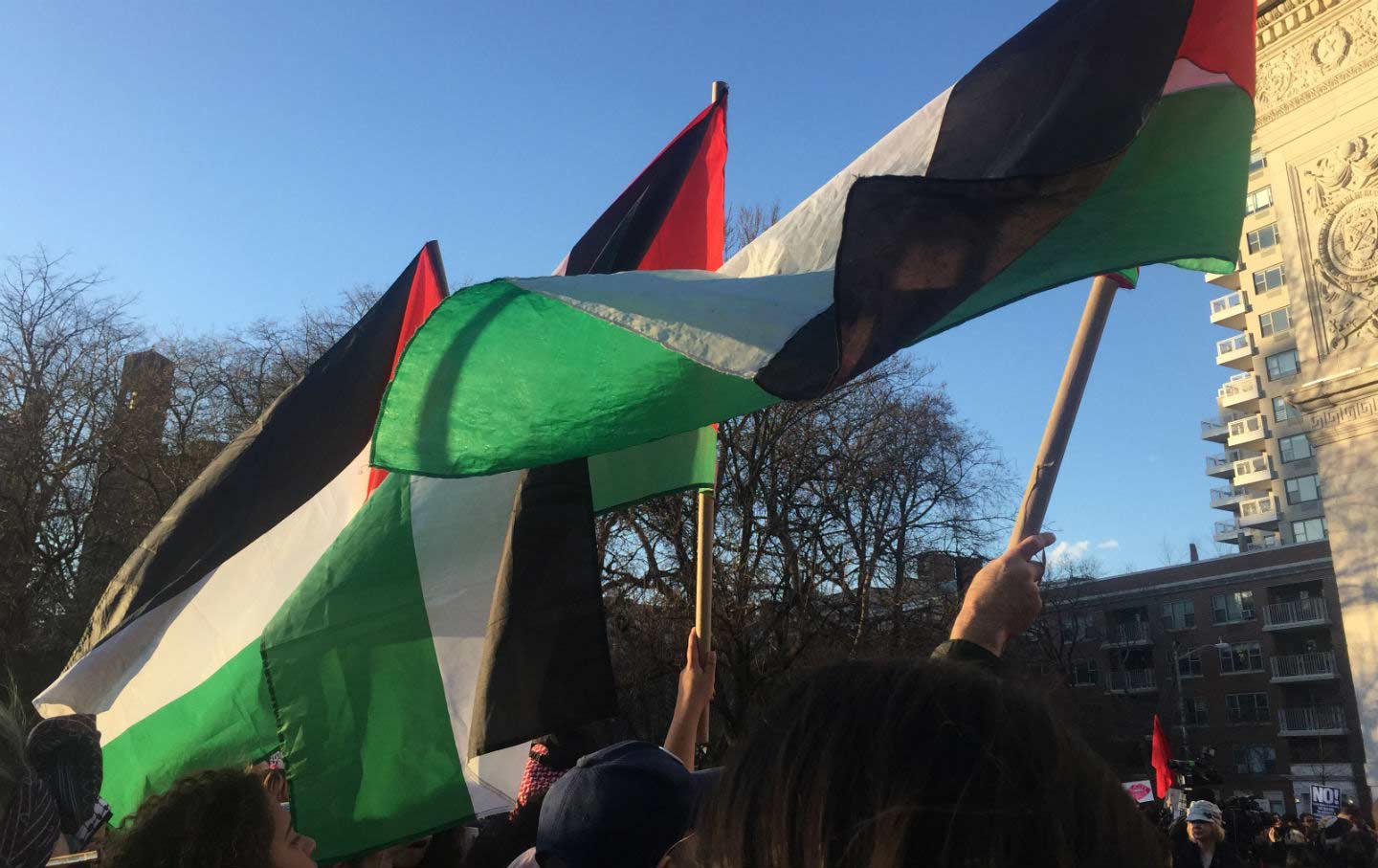 Since Donald Trump was elected to the presidency, millions of women across the country have become active in a newly resurgent feminist movement. But, like in all feminist movements before it, tensions between groups of women are bubbling to the surface. The latest fissure making its way into public consciousness is about the role of Zionism in feminism, raised last week by Bustle politics editor, Emily Shire, in a New York Times op-ed.

The International Women’s Strike, an international day of action “by and for women who have been marginalized and silenced,” took an anti-colonial, anti-imperialist position, calling for the destruction of walls “from Mexico to Palestine.” Organizers of the strike wrote in its platform that the decolonization of Palestine is “the beating heart of this new feminist movement.” The day before the strike, Shire, who identifies as a Zionist, expressed her dismay over the platform’s stance on Israel and wrote that she felt like she was being forced to “sacrifice” her Zionism for the sake of her feminism.

In the days after its publication, Shire’s piece has reignited a debate among feminists about the tenets of the movement. I spoke with Linda Sarsour, a Palestinian-American feminist activist, who disagrees with Shire’s claim that feminist actions shouldn’t take a hard line on Israel. Sarsour is one of the architects of the January 21 Women’s March, the biggest national demonstration in history, and also helped organize “A Day without a Woman,” an action that took place in solidarity with the International Women’s Strike.

The following conversation has been edited for length and clarity.

“Anyone who wants to call themselves an activist cannot be selective.”

In her op-ed, Emily Shire asks, “why should criticism of Israel be key to feminism in 2017?” I think she was being a bit flip there, but I’d love if you can answer her question in earnest.

I was quite surprised and disturbed by her piece. When you talk about feminism you’re talking about the rights of all women and their families to live in dignity, peace, and security. It’s about giving women access to health care and other basic rights. And Israel is a country that continues to occupy territories in Palestine, has people under siege at checkpoints—we have women who have babies on checkpoints because they’re not able to get to hospitals [in time]. It just doesn’t make any sense for someone to say, “Is there room for people who support the state of Israel and do not criticize it in the movement?” There can’t be in feminism. You either stand up for the rights of all women, including Palestinians, or none. There’s just no way around it.

Shire specifically argued that “Regardless of your opinion on [Boycott Divestment and Sanctions] issue, it has nothing to do with feminism.” BDS calls for “broad boycotts” and the implementation of “divestment initiatives against Israel similar to those applied to South Africa in the apartheid era,” in order to raise awareness around the occupation of the Gaza Strip and the West Bank and the denial of the “right of return” for Palestinians who were expelled from what is present-day Israel during the country’s founding. Growing support for BDS has really rankled supporters of Israel like Shire. Can you respond to Shire’s claim that BDS has nothing to do with feminism?

What’s interesting here is that feminism is a movement and BDS is a tactic. That’s the first thing Shire doesn’t understand. But that’s the reason why BDS makes sense within the feminist movement, or really within any social justice movement, be it climate justice or racial justice, or the Palestinian solidarity movement. For example, in the racial-justice movement people have said that we need to divest from private prisons, right? In the climate-justice movement, we need to divest from fossil fuels and companies profiting off of the destruction of our planet. We need to take our money out of banks that are profiting off the Dakota Access Pipeline. [Similarly,] BDS is a tactic and feminism is a movement. And BDS can be used in the feminist movement to demand change and demand more rights for women. BDS has been used as a tactic to raise awareness for Palestinian people, including women and their children.

Can you give some more real-life examples of the ways in which women in Palestine are oppressed by occupation?

They are oppressed in many ways, including lack of access to health care and poverty. These are women who have to figure out ways to feed their children. They have limits on their travel. These are all things that women around the world want and many of us have the privilege of having access to in the United States. Women in Palestine are women that require other women around the rest of the world to stand with them. There are some [Palestinian] women who are denied access to scholarships. There have been Fulbright scholars banned from leaving the country to pursue higher education. There are just so many levels of oppression that all Palestinian people experience, but in particular, women.

A colleague here at The Nation pointed out that many Palestinian-American women have had key roles in the Women’s March, the International Women’s Strike, and other post-election feminist mobilizations. You, Lamis Deek, Rasmea Odeh, among others. Do Palestinian-American women have a unique position in the fight against oppression given the history of the Israel/Palestine conflict?

It’s been a little surprising to the [right-wing Zionists] to see [Palestinian-American] women in leadership roles in social-justice movements because [they are realizing] it means that the Palestinian Liberation Movement and the Palestinian Solidarity Movement are gaining traction among young people and people of color in the United States. And I will say this, yours seems like a short list. The fact of the matter is that there are hundreds of Palestinian women organizing, but not all of them are visible. And I’ll tell you why. You’ve probably seen that any visible Palestinian-American woman who is at the forefront of any social-justice movement is an immediate target of the right wing and right-wing Zionists. They will go to any extreme to criminalize us and to engage in alternative facts, to sew together a narrative that does not exist. So, fortunately, we’re still in a moment in our country where we have the freedom of speech and the right to organize, but we have another layer as Palestinian American women, where we have to deal with threats, slander, and libel in mainstream and right-wing media. This work that we do is not easy, but I feel hopeful we are part of a movement now. One with young people, and people of color in particular, who are really taking on the cause and really embracing us as Palestinian, American, Muslim women.

Are there any last comments you’d like to make about Emily Shire’s piece?

I would say that anyone who wants to call themselves an activist cannot be selective. There is no country in this world that is immune to violating human rights. You can’t be a feminist in the United States and stand up for the rights of the American woman and then say that you don’t want to stand up for the rights of Palestinian women in Palestine. It’s all connected. Whether you’re talking about Palestinian women, Mexican women, women in Brazil, China, or women in Saudi Arabia—this feminist movement is an international global movement.