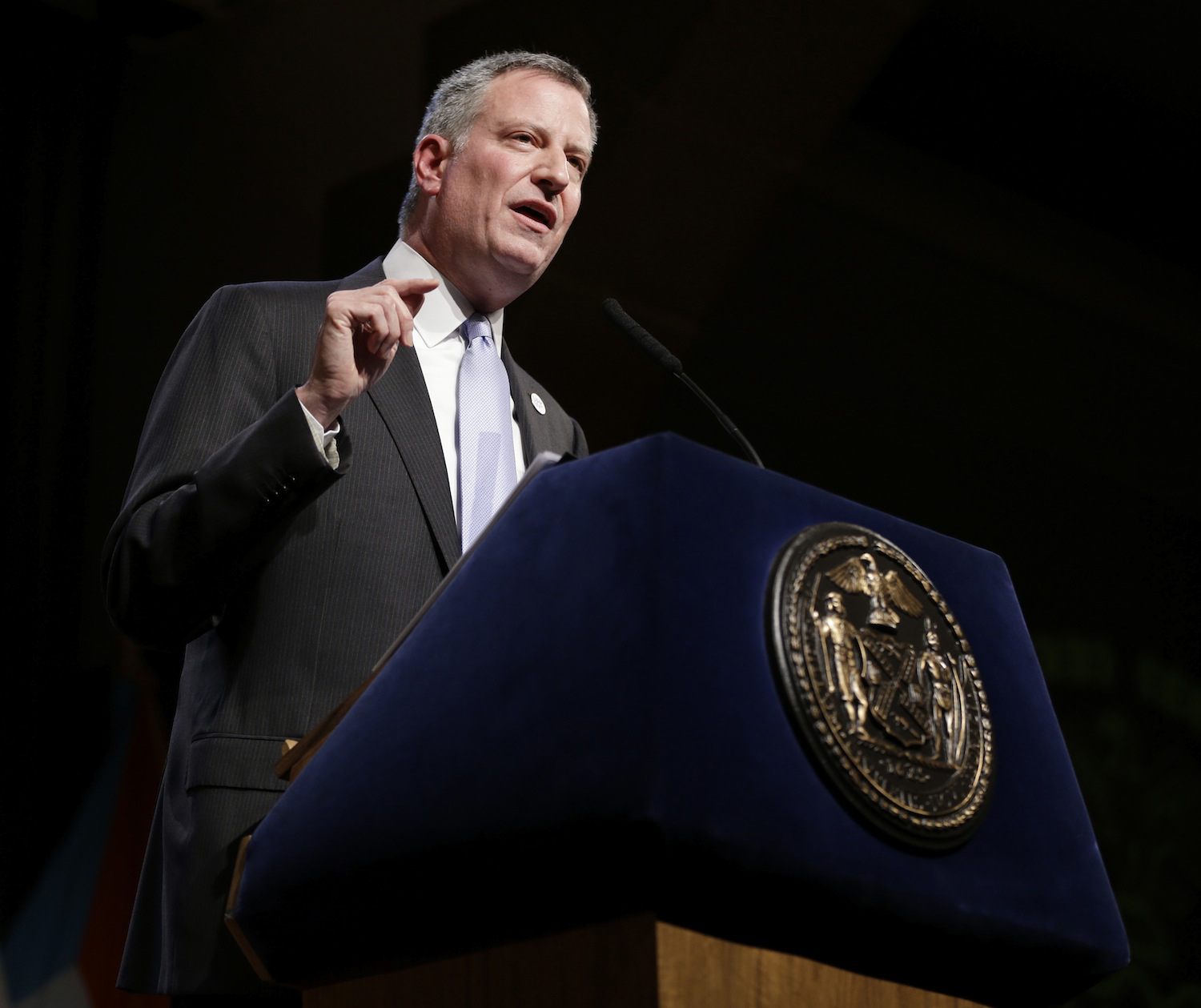 At the moment of silence during Sunday’s People’s Climate March, a deep hush washed over Sixth Avenue, symbolizing a growing, worldwide commitment to fighting climate change. Yet the moment also recalled the aftermath of the city’s most recent climate catastrophe, Superstorm Sandy, when Manhattan’s mighty skyline was for several days stunned into an eerie stillness by nature’s ire.

But on Sunday, the city put a more positive spin on the connection between the global environmental struggle and the local disaster of Sandy. Mayor Bill de Blasio tried to make good on his campaign vow to address the underlying climate-change problems Sandy exposed, starting with a retooling of the city’s buildings.

The “One City, Built to Last” plan aims to slash building-based greenhouse gas emissions and boost the economy simultaneously. Overall, the plan promises to bring “$8.5 billion in energy cost-savings over ten years.” The long-term goal is to cut total emissions by 80 percent by 2050. Buildings contribute a large majority of local carbon pollution, and the plan would “cut energy use across all building sectors on average by at least 60 percent from 2005 levels and switch to renewable fuel sources.”

Many of the changes outlined in the 110-page blueprint are basic. In contrast to the sexy tech-driven solutions like electric cars and flashy rooftop photovoltaics, the de Blasio administration and City Council members are focusing on nuts-and-bolts efficiency projects to expand “green collar” job sectors.

The plan would in the immediate term “generate approximately 3,500 new jobs in construction and energy services,” according to Amy Spitalnick, a spokesperson for the mayor’s office. Modest numbers, but the main goal is putting the city’s infrastructure on a greener and more equitable development path.

Matt Ryan, executive director of the advocacy group ALIGN-NY, tells The Nation that the plan reflects a “need to think about dealing with climate change in a way that not only addresses the root causes, such as carbon emissions, but also addresses jobs and economic issues that are related.”

Some of the proposed initiatives include a “retrofit accelerator” program for an estimated 20,000 private buildings, about 40 percent of them public housing or rent stabilized. Public school buildings, firehouses, hospitals, police stations and homeless shelters would get energy-saving retrofits and lighting upgrades, and fixed up with clean technologies. The city would install solar panels “on more than 300 city buildings, generating 100MW of energy over the next decade.” The plan would link green building projects to the broader agenda of controlling housing costs: less energy consumption means lower utility bills, which “will make it easier for people to afford to live in New York City” and “invest in other capital upgrades to improve the quality of our housing stock.”

But the plan doesn’t spell out exactly how the city will push the private sector to invest in efficiency and renewables. The report focuses on voluntary programs, and the administration has for now avoided proposing strict mandates for carbon reductions, relying instead on seeding environmental business incentives (though mandates may be “triggered” later if needed). The administration advocates, for example, providing “green grants” that tie affordable-housing goals with eco-friendly construction, “which would fund efficiency upgrades in exchange for regulatory agreements to preserve affordability.”

Nonetheless, progressive groups are wary of leaving too much of the plan to market forces. Though some landlords may respond to green incentives because it makes business sense, Ryan says, given the ambitious emissions targets, “There is no way we’re going to move fast enough through a voluntary system, to meet the urgency of the climate crisis.”

Some progressive labor advocates fear that the workforce initiatives may not be ambitious enough, either. The Center for an Urban Future (CUF), which has pushed the administration to expand jobs programs for disadvantaged youth, warns that although green jobs could benefit struggling young workers, they need more comprehensive job training and placement services.

“There are really very few youth centered programs that have strong links to employers…. It’s especially true for construction, weatherization and maintenance jobs that really require a lot of skills,” says CUF Research Associate Christian González-Rivera. Without a major effort by the city “to engage employers and youth workforce agencies in building the kinds of relationships that will really get young people on track to getting these new jobs…young people will continue to be left behind, no matter how many jobs are created.”

But the plan does appear to aim beyond the usual “shovel ready” construction projects that are the easiest to fund in big infrastructure initiatives. According to Spitalnick, the city plans to work with the Department of Education to train some high school students in energy auditing, and to “train more than 7,000 building staff to upgrade their skills.”

The report cites as a model the pioneering “Green Supers” program led by the building service workers’ union, SEIU 32BJ, which has trained and certified about 2,000 members on maintenance skills specializing in maximizing efficiency for lighting, ventilation and other operations. In contrast to one-off retrofitting jobs, Ryan says, Green Supers graduates “are going to be in a building for a long time. They’re going to have to learn technology as that changes year by year and continue to develop those skills as things change.”

The city also faces the challenge of balancing environmental goals and housing needs, and making the two objectives complement each other. Poor New Yorkers face skyrocketing private-housing rents, along with shoddy public housing (a huge repair backlog has accumulated in recent years, ranging from mold to leaky roofs). These are more immediate housing issues, perhaps, than green retrofitting. However, climate justice can address ecological and economic sustainability simultaneously. After all, the areas most damaged by Sandy were those already besieged by poverty and, by extension, a lack of environmental resiliency when disaster strikes.

Sunday’s moment of silence spoke directly to that challenge—harmonizing the movements for economic equity and for greener, healthier neighborhoods. The city that boasts of leading the world on carbon cutting is also a leader in social inequality; it is now tasked with rebuilding itself both to a higher environmental standard and to a more level economic landscape.

That may seem like a tall order, and New Yorkers are famously cynical, but this city has a history of harboring impossible dreams. Anything short of total idealism at this point would condemn future generations to a disaster of our own making.