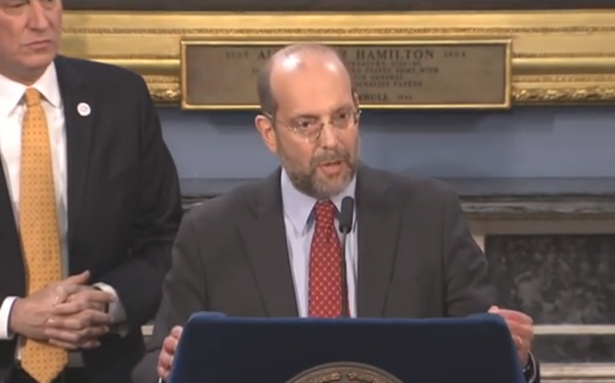 Depending on your politics, the term “safety net” might suggest a government that righteously protects its neediest, or a nanny state that coddles the undeserving. But for many poor New Yorkers, it’s a misnomer—more of a tightrope than a net. Because instead of breaking your fall into poverty, the bureaucracy of the city’s welfare system shoves you further over the edge.

A new study by the legal advocacy group Urban Justice Center (full disclosure: where the author once interned and volunteered), based on surveys of clients, argues that New York City’s primary public assistance agency, the Human Resources Administration (HRA), has become utterly dysfunctional under the last two conservative administrations. It’s not just a matter of incompetence but rather a so-called “culture of deterrence”: a bureaucratic process that indirectly aims to make welfare so unpleasant even eligible people stop applying (which conveniently serves the agendas of politicians who emphasize “personal responsibility” over public assistance).

To obtain basic benefits like food stamps or cash assistance, New Yorkers must wade into a labyrinth of paperwork, indefinite waits in stuffy offices, and brusque caseworkers. It’s no wonder people are put off by the process, given the relatively paltry reward they stand to gain (New York’s full welfare grant is roughly half the official poverty line for a family of three). Just consider the opportunity cost of spending an hour waiting for a caseworker who never shows instead of job hunting or taking your kid to the doctor.

According to a survey of 130 clients at twenty-five HRA hubs, known as Job Centers, the frustration begins the minute they set foot in the office. Basic accommodations are lacking, like special provisions for domestic violence survivors and people with disabilities. Many reported language translation services were not offered to non-English proficient clients. The vast majority said their calls to the agency were “rarely or never answered,” and people waited on average over 3.5 hours. When they did talk with a staffer, about eight in ten respondents reported “being spoken to in a rude manner.” And caseworkers lost clients’ paperwork about two thirds of the time. The deterring effect of this poor treatment was most evident when applicants challenged the agency’s decisions. The study found that when people take a dispute over their benefits to an administrative review hearing, “HRA loses the vast majority of hearings that are held”—suggesting either systemic incompetence or a culture that promotes arbitrarily denying benefits on the assumption that people won’t bother protesting.

The HRA management has come under increasing pressure to reform, including through a new state measure to impose a “chargeback system” that would financially penalize the agency when administrative reviews determine it acted unfairly. But advocates also hope the de Blasio administration will tackle the underlying systemic problem with welfare: an institutional structure so mean to the poor it often alienates people more than it aids them. And New York’s poorest are not alone: in other states, for example, officials have tried to stonewall welfare applicants through onerous, intrusive mandatory drug-test requirements. In state welfare programs nationwide, people’s benefits may be abruptly cut by a “failure to comply” sanction, which agents routinely impose as a penalty for missing, say, a Job Center appointment or a day of work.

One legal study on factors that discourage welfare participation observed that deterrence is linked to an array of nuanced social barriers, including social stigma, bureaucratic snafus, and a “lack of resources” in state agencies that make “encounters with the welfare system unpleasant, time consuming, and uncertain with respect to outcome.” On an individual level, such encounters are not just deterring, they’re dehumanizing. In one case cited in the report, an applicant named Marlene tried to access public assistance through a Job Center but was turned away repeatedly, faced “unsympathetic and antagonistic reactions from HRA staff members,” and was even asked by one agent, “What’s wrong with you? If you did what you were supposed to do, you wouldn’t be here again.”

She later recalled that whenever she was due for another appointment, “I knew that it was going to turn out horrible,” but she felt she had no choice but to return. The humiliation compounded the hardships of poverty, and Marlene’s family spiraled further downward, struggling with hunger and the threat of eviction. She was eventually hospitalized for anxiety—a public health cost that a more responsive welfare system could have helped her avoid.

The overarching deterrent lies in welfare’s work requirement. A hallmark of Clinton-era neoliberal welfare reform, welfare-to-work programs supposedly promote “self-sufficiency” by forcing people into low-wage, often extremely arduous and unsatisfying jobs as a condition of receiving benefits. Advocates say that while “workfare” programs could theoretically be designed to help people secure education or meaningful employment, the work mandate instead erodes dignity and perpetuates hardship. Previous research on HRA’s mandatory work system shows that clients are regularly “warehoused” in dead-end jobs that do not lead to sustainable long-term employment, and that the system actually steers people into low-wage jobs to fulfill requirements, while failing to provide adequate subsidies for alternative education programs, tracking people into a cycle of demoralizing work and chronic poverty. Yet anti-poverty activists see something more nefarious at work than just red tape and ineffective policy. The current welfare infrastructure, they argue, with its paternalistic “work first” philosophy, is designed precisely to exclude as many as possible.

Denise Miranda, director of the Urban Justice Center’s Safety Net Project, tells The Nation via email that, with Washington’s welfare-to-work concept, “Federal welfare reform set the stage for bureaucratic deterrence to flourish. The introduction of the work program and all of the accompanying work appointments were used as opportunities to deny and cut off potential recipients.”

Activists say the root problem does not lie with frontline HRA staff, who are struggling workers themselves, but with structural resource gaps and a welfare regime that turns anti-poverty programs into anti-poor practices. In Miranda’s view,

the culture of deterrence established by previous administrations must often be as frustrating to HRA staff as it is to us.… Individual workers operate and respond within the policies, systems, and organizational culture set by leadership, which for the past twenty years has focused on deterring New Yorkers from accessing the help that they need.

But today, anti-poverty activists are hoping to see deep structural changes at HRA under the newly appointed head, former Legal Aid rabble-rouser Steven Banks. Banks has promised to reshape the HRA into a more “compassionate” organization, by shifting away from punitive sanctions and toward more supportive programs to foster long-term economic security, not to mention improve working conditions and morale for HRA staff.

After years of right-wing welfare policy, the new HRA has a lot of work to do to win back the trust of the city’s embattled poor. Whenever a poor family gives up public assistance to avoid the hostile atmosphere at the benefits office, they forgo more than a check. New Yorkers are a proud bunch; by forcing them to trade personal dignity for social entitlements, the system seeks to shrink public spending at an unconscionable moral cost.