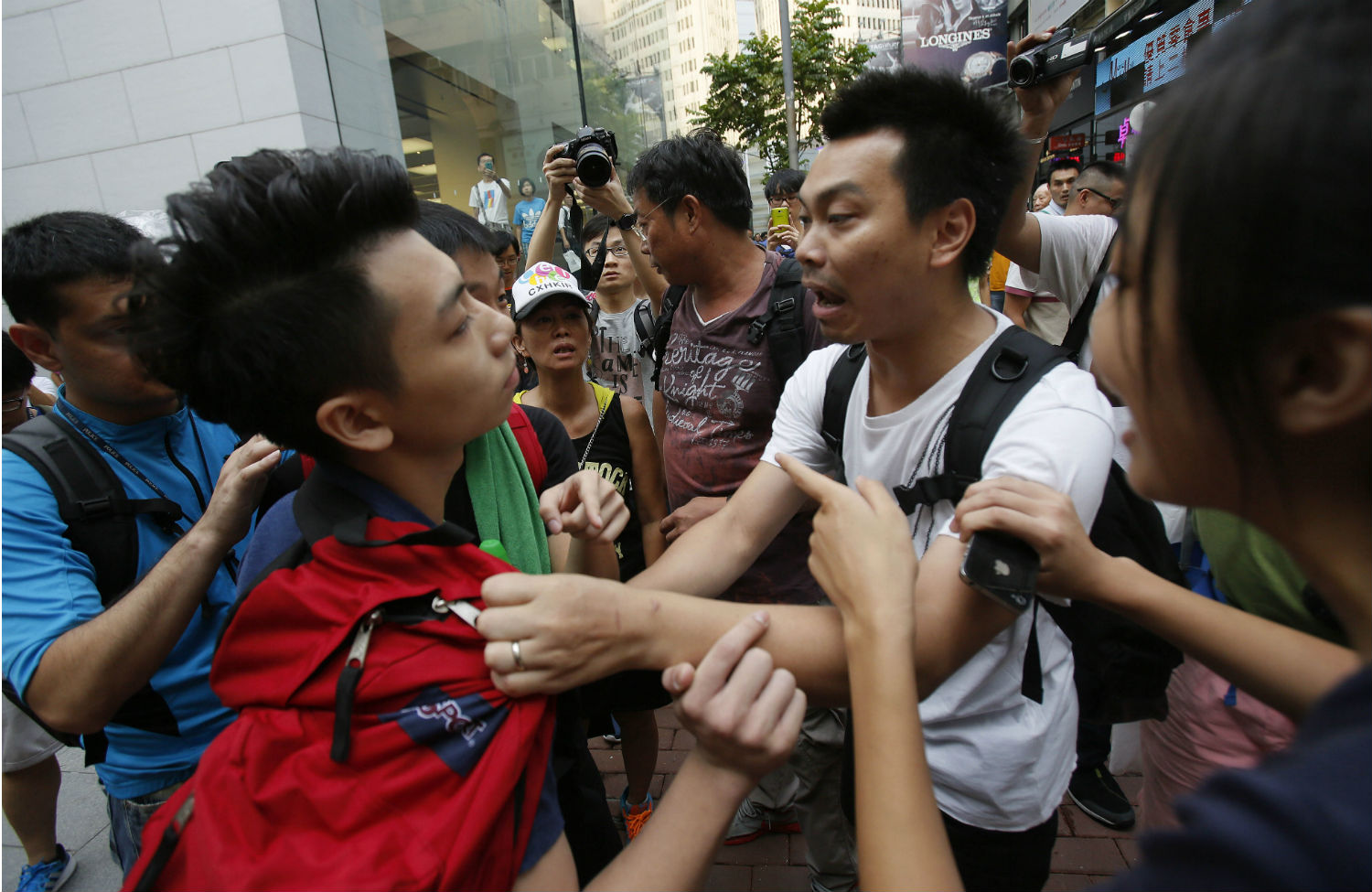 As night fell on October 2, Hong Kong braced for a major showdown between police and pro-democracy protesters who have maintained a steady and peaceful presence throughout the city for the past few days. But the face-off never took place.

Instead, starting around noon local time on Friday, opponents of Occupy—including aggrieved residents, small business owners, anti-Occupy activists and triad members suspected of colluding with the government—wrought havoc at the pro-democracy sit-ins, while the police turned a blind eye to the violent clashes and incidents of sexual harassment. But some think the conflict that will prove most critical is the one developing among the pro-democracy protesters themselves.

The civil disobedience movement calling for a more open election of Hong Kong’s chief executive captured the world’s attention on Sunday when riot police fired unprecedented rounds of tear gas and beat and pepper-sprayed protesters, who were armed only with umbrellas, goggles and Saran Wrap. The police’s violent strategy to disperse the crowd near the government headquarters enraged protesters and mobilized moderates to join in the growing struggle. After police blocked several roads, the occupation spilled over to other major commercial districts spontaneously, creating what has become today’s leaderless civil disobedience landscape across various urban centers.

Throughout the last few days, after the riot police withdrew, the movement settled into a calm but lively routine. Protesters set up their own first-aid and supplies stations, discussions and voting circles, crowd control and trash sorting systems, and creatively assembled roadblocks without any top-down instructions.

The most widely discussed aspect of Beijing’s electoral reform plan—the spark that ignited the current protests—is the introduction of a highly managed form of universal suffrage to Hong Kong, which only allows the public to vote for Chief Executive candidates vetted by Beijing. But instead of directing their slogans and signs at the motherland or even the Chinese Communist Party, protesters had focused on denouncing Leung Chun-ying.

“He is merely a chessman in a much larger systemic problem,” said Dennis Ng, an employee of a bank, who acknowledged that Leung is in no position to influence Beijing’s hard-line stance. “But the problem becomes dysfunctional when his—our—government can’t even earn our basic confidence.”

“The movement right now is still liberal and reformist. But I’m glad it didn’t turn right and anti-Chinese, since the idea of ‘Hong Kong people’ in the Hong Kong context sets up the ‘other’ as the mainland Chinese,” said Lala Lau, an activist and graduate student. This fear isn’t baseless, since earlier this year protests erupted against “cashed-up” Mainland tourists who were criticized for gentrifying neighborhoods. These relatively small protests were met with backlash for their racist rhetoric.

In the lead-up to Friday’s violence, student leaders gave Leung an ultimatum: step down by the end of October 2, or we will escalate our campaign by occupying government buildings.

Predictably, Leung brushed off the demand. But no government buildings were occupied.

After the police were seen transporting what seemed to be riot gear into the government headquarters, protesters were divided about whether to go through with their threatened actions. A faction of the crowd repeatedly asked everyone to “stay calm,” fearing that a broader occupation could lose the majority’s support for the movement. Come the early hours of October 3, tension escalated internally as protesters disagreed on how the movement should proceed.

Many Occupy protesters recognize that electoral reform is only the first step toward addressing the larger problems stemming from an administration without popular mandate. While the leadership in Beijing suppresses dissent and resistance on the basis of protecting national security, driving out western influence and maintaining the city’s “long-term prosperity and stability,” protesters are increasingly drawing attention to the territory’s severe inequality, soaring prices and overcrowding, all of which contribute to Hong Kong’s place at the top of the Crony Capitalism Index.

“The prosperity and stability they are talking about is for the rich, only,” said Lau.

Disrupting activities in high finance was the Occupy Central campaign’s original leverage, but the mass sit-in ended up deserting Central, the “Wall Street of Hong Kong,” as the focus shifted towards Leung Chun-ying and occupying the roads to the government headquarters. The Occupy movement has also bloomed against the backdrop of increasing efforts over the last few months by activists protesting the government’s controversial plan to develop northern rural areas bordering China. The development plan may displace at least 6,000 farmers and villagers to make way for luxury properties and retail spaces catering to shoppers and “day-trippers” from the mainland. Preliminary funding of HK$340 million for the plan was forced to pass in late June in a chaotic legislative chamber surrounded by protesters—not a sign of a functional government.

Lau, who was active in those earlier protests, told The Nation, “as the government pushes for this plan, we see what position Hong Kong occupies in Beijing’s vision as part of the Pearl River Delta region”—emerging mega-cities connecting southern China—“and we don’t really have autonomy over urban development decisions, while the border becomes porous only for wealthy tourists and their luxurious spending.”

To be able to connect calls for free elections with the ongoing exploitation of farmers and the poor, the Occupy movement will first have to overcome the very real disagreements in its ranks over just how militant the protest should be.

“Our movement is at the edge of failure, and people don’t actually believe in the power of the people, or realize the real impacts of occupying a place,” said Timothy Chan, a theology graduate student. He believes in committing to the collaborative and bottom-up ethos that the Occupy sit-ins across the city have opened up. “I think they should sit down and resolve the internal conflicts and try to come up with a decision by reaching a consensus. Otherwise you might end up with different Occupy camps blaming each other for aborting or ruining the movement.”

“It’s part of the capitalistic thinking to emphasize rationality and order,” he added. “Many protesters seem to think being peaceful is the rational thing to do and the only way to sustain the movement.” Such inclinations may have been reinforced by the international media’s racialized fascination with how polite and clean the protesters have been in the so-called Umbrella Revolution.

Last night’s threat of occupying government buildings—an act that could have shaken the “peaceful” reputation of the movement—never materialized. Since the Hong Kong government now appears to be trying to wait out the unrest, advocates of escalating the movement’s tactics argue that continuing with simple peaceful assembly—rather than wider civil disobedience—will be to the government’s advantage. As Chan said, speaking of protesters pushing for calm, “those in fear have ignored the threatening possibilities of nonviolence.”