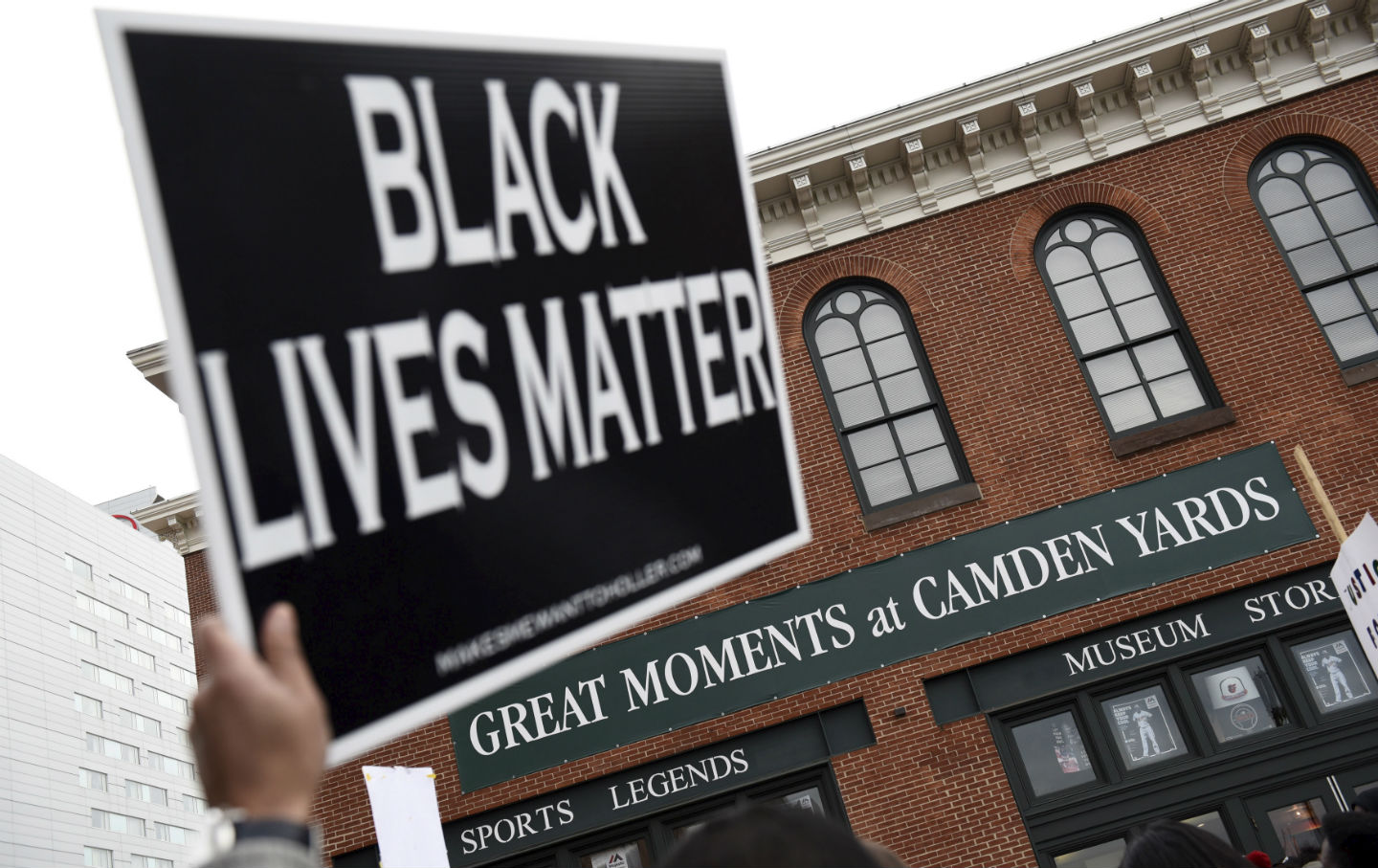 Demonstrators gather near Camden Yards to protest against the death in police custody of Freddie Gray in Baltimore. (Reuters/Sait Serkan Gurbuz)

I was at the Saturday protests in Baltimore aimed at seeking justice for Freddie Gray, the young man who died while in police custody, his spine severed and neck broken. This column is about what took place inside Oriole Park at Camden Yards, where fans were told on orders from Baltimore’s Mayor Stephanie Rawlings-Blake and Police Commissioner Anthony Batts to stay inside the stadium following the Os’ extra-innings victory over the Boston Red Sox, rather than risk the “violence” of protesters.

But before we go to the baseball field, let’s make one thing clear: Most everything the media reported about the Baltimore protests has skirted the line between the highly sensationalistic and the libelous. Every headline and photo has focused on property damage, allegedly done by those protesting for Freddie Gray. Played down or ignored is the Baltimore I saw: a place where more than 2,000 people—including families and children—marched resolutely while helicopters and visible surveillance drones flew overhead.

This is not to say people are not enraged with a city police department that, beyond Freddie Gray, has a proven record of seeing black lives as expendable. A young woman named Tracey who told me she grew up in the same apartment complex as Freddie Gray said to me that she was marching because “The police aren’t going to stop making us afraid unless we show them that we’re not scared. Not one more sister or brother should die at their hands.”

That story, the one where a portion of the city—the black, economically ignored portion—lives in dread of police violence and were marching not just for Freddie Gray but against the history of the Baltimore PD, was not the story the media chose to tell. Instead, they chose headlines like this, to tingle the synapses of those who have little to fear from police, poverty, or street crime, but never seem to feel more alive than when they feel afraid. It’s unconscionable, just as it was unconscionable for the Baltimore police union to call protesters “a lynch mob,” just as it was unconscionable for the city to take the actions it did at Camden Yards.

On Saturday, after the Baltimore chief of police and mayor ordered the fans to stay inside Camden Yards, the Oriole faithful were “given instructions of areas [of the city] to avoid.” This detaining of thousands of fans for their own “protection,” only lasted a few minutes, but its effects have been far-reaching. Whether intentional or not, it was more than just an overly cautious over-reaction. It was a message sent out across the country that this protest was not only unlawful but something to be feared.

Camden Yards morphed from a field into a fortress. It became a stadium dividing a city between haves and have-nots: a barrier erected on the foundations of racial and economic inequality dressed in the trappings of spectacle and sports. That it was built with the tax dollars of those on both sides of the divide just makes the situation all the more dismal.

Camden Yards is universally recognized as a terrific place to watch a baseball game. It was also the first of a wave of publicly funded urban old-timey ballparks that sprouted in cities throughout the 1990s. These extremely lucrative stadiums were aimed at aligning baseball commercially with nostalgia for the glorious past of the sport. As baseball fanatic Chris Rock recently pointed out, MLB’s fetishizing of its history over the last thirty years has paralleled a steep decline in popularity within the black community, and this is more than incidental. As Rock said, “Every team is building up bullshit fake antique stadiums that are supposed to remind you of the good old days. You know the good old days. Ruth, DiMaggio … Emmett Till.”

As much as Major League Baseball likes to slather itself in the memory of Jackie Robinson and the idea that it has been a force for community cohesion, the reality is that it has done more to partition communities where the only way some residents can get into stadiums they are subsidizing with their tax dollars and cable bills is if they’re serving beers.

One could imagine a situation where people inside Camden Yards would have to confront with their own eyes the reality that a young man, who did not look all that different from some of the people they were cheering on the field, was killed a short Uber ride away. They could confront the fact that the same police officers protecting them have a frightening history that is being dragged out into public view since the death of Freddie Gray. They could confront the bracing defense of the protesters that has actually come from Baltimore Orioles COO John Angelos, who took to Twitter in a series of messages and said, in part,

We need to keep in mind people are suffering and dying around the U.S., and while we are thankful no one was injured at Camden Yards, there is a far bigger picture for poor Americans in Baltimore and everywhere who don’t have jobs and are losing economic civil and legal rights, and this makes inconvenience at a ballgame irrelevant in light of the needless suffering government is inflicting upon ordinary Americans.

Instead, on the mayor’s orders they were locked in, a message sent not only to those inside but the world that the real enemies of civic peace are the ones looking for justice.