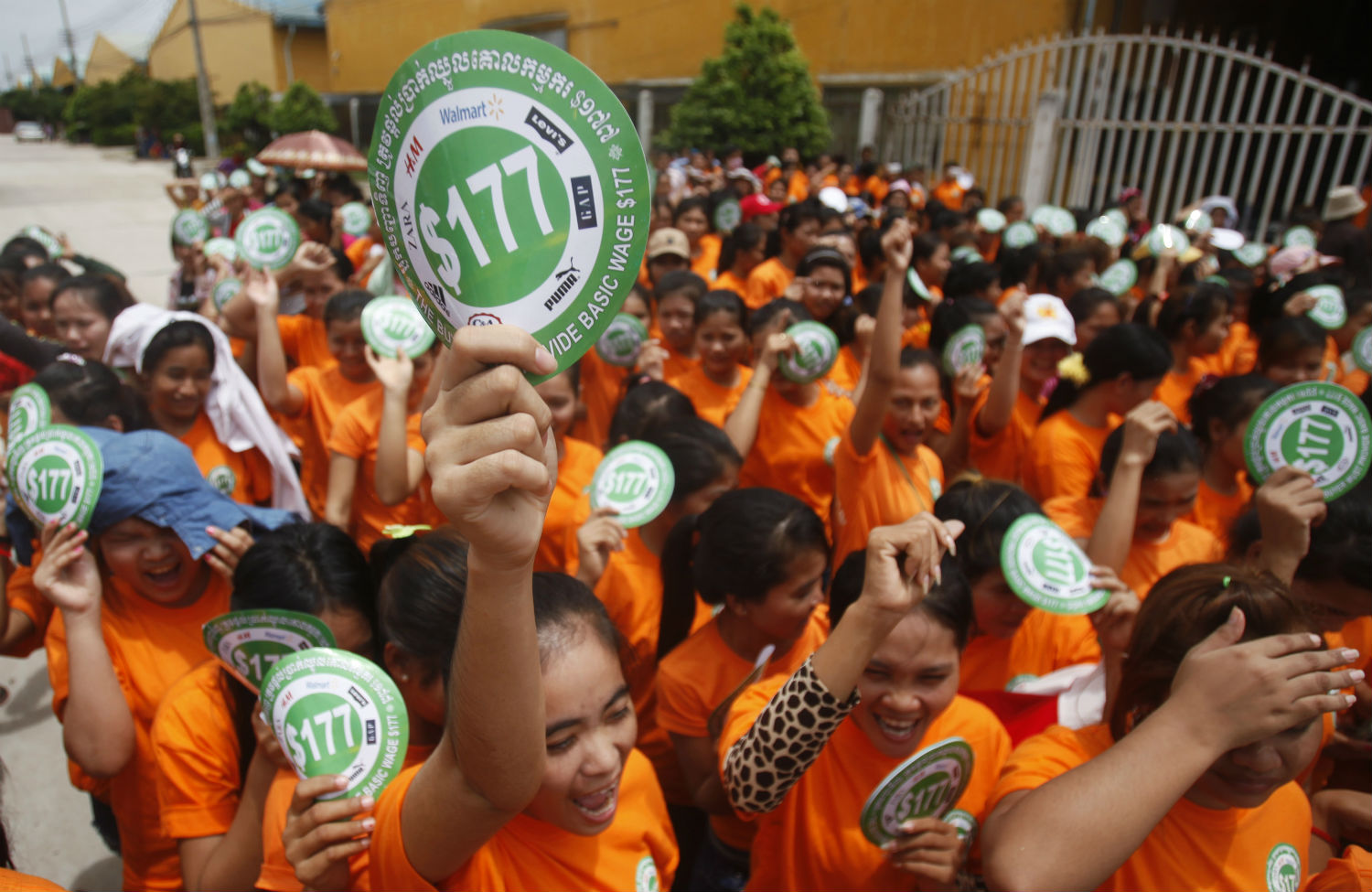 Last January in Phnom Penh, the garment industry seemed to be coming apart at the seams: protesters thronged through the streets, several died after security forces opened fire and union leaders were detained for weeks without trial. A year on, the unrest has subsided and workers are getting a modest wage hike, but the systematic suppression of unions continues to breed bitter outrage.

Last December, hundreds of workers rallied at the South Korean Embassy to demand justice at the Korean-owned Cambo Kotop factory, following the alleged illegal dismissal of union leaders who had planned a strike. They were opposing a court order to return to work.

Pav Sina, head of the Collective Union of Movement of Workers (CUMW) issued a public letter on Friday describing deteriorating conditions at the plant, which employs about 2,500 people and supplies brands like Gap and Walmart.

Nowadays, the workers’ rights and freedom are badly repressed by the company-management…. For instance, [when] the workers…talk to each other during their lunch time, the company always take photos and tell them to stop immediately, especially when the workers, employees talk about the union tasks.

The union called directly on Gap to “urgently intervene in these illegal dismissals” and pressure the supplier to “stop interfering and discriminating” against any union activities.

Cambo Kotop is just one facet of Cambodia’s multi-billion dollar garment export industry, which supplies a vast low-wage labor supply to the US and European brands that dominate the $1.7 trillion global fashion market. Last year, several major brands voiced public support for raising the industry’s minimum wage. But international scrutiny has since dissipated, and workers are again demanding international support for their union rights.

The Ministry of Labor has responded only tepidly to the Cambo Kotop protests. On December 30, labor official Vong Sovann told Cambodia Daily that the management had been ordered to reinstate the fired union representatives but had simply refused to comply. “Both sides are in the wrong,” he contended, “because the factory suspended the workers without permission from the ministry and the workers joined the strike without informing the authorities.”

To David Welsh of AFL-CIO’s Solidarity Center in Cambodia, which aids local unions, such statements call into question whose side the labor authorities are on. Because “the factory is in violation of the law, and not respecting the dictates of the Ministry of Labor…their export license should be suspended, or certainly investigated,” he tells The Nation, noting that, “normally the Ministries of Labor and Commerce [could threaten having the companies’] export licenses revoked or at a minimum having them investigated, but this doesn’t appear to be on the table, which speaks to the high level of immunity the industry enjoys.”

This week, the CUMW issued another open letter condemning Chinese-owned denim producer Eastern Industrial Enterprises, located in the Manhattan Special Economic Zone (one of many regional hubs for minimally regulated foreign investment), claiming that the factory had dismissed several union activists and workers, and management had falsely accused the union of taking bribes. (Eastern Industrial and Gap have not yet responded to requests for comment, as of press time.)

Amidst this lax labor enforcement environment, anti-union violence persists. The labor federation IndustriAll reports that in December, the president of a local union affiliate, the Free Trade Union of Workers of the Kingdom of Cambodia, “was brutally attacked with a metal bar by two unidentified men after she had been threatened by management to stop organizing at the factory where she works.”

Unions had hoped that the backlash against last year’s savage anti-union crackdowns would bring major reforms, especially after the violence prompted some image-conscious Western brands to promote an industry-wide wage increase. But the government raised the base wage to just $128 per month, well short of international unions’ demands of roughly $177 (the estimated “living wage” for garment workers is more than $200). Though wages in Cambodia are somewhat higher compared to other regional exporters like Bangladesh, factory work is associated with severe exploitation and health stresses.

Calling the wage measures a “missed opportunity,” Welsh says, “The wage mechanism that [the government] committed to is not in place, the process is not what they said it would be. And so they really bought a bit of time…until [the campaigning] basically resumes” on issues of wages and union rights.

In some cases, the legal process has vindicated workers, but employers remain hostile to union demands. For example, the charges brought against protesters last year were eventually dismissed, and the government’s labor arbitration council has repeatedly ruled in favor of unions in disputes over labor protections and benefits. But when they face impasses like the Cambo Kotop clash, in which both officialdom and employers are politically aligned, Welsh argues, “what recourse do unions have but to strike?”

Cambo Kotop, he adds, is “symptomatic of a much larger and very persistent assault on independent trade union rights in that sector and the country throughout the year.”

The suppression of unions is ingrained in the industry’s structure through the widespread use of short-term contracts. For the largely female workforce, earning poverty wages while supporting families in the countryside, chronic job insecurity is an intrinsic deterrent to union activism.

Meanwhile, a government investigation into the killings of protesters last year appears to have stalled. Among the brands that previously condemned the crackdown in their “corporate social responsibility” campaigns, multinationals are more muted today; Levi-Strauss and Adidas have issued only nondescript media statements about awaiting action from official investigators.

Factory bosses have chafed at the new wage mandate, despite pressure from labor advocates to adjust their operations to accommodate the pay raise (adding perhaps mere pennies to retail prices).

Ken Loo, secretary-general of the Garment Manufacturers Association in Cambodia, told Cambodia Daily, “We’ve been saying all along…the higher the wage is set, the more factories will have to close.”

Unions seem willing to take that risk, as it’s not just their wages, but also their movement at stake.

The recent wildcat strike and protests show workers’ desperation has reignited once again. Though multinational brands might have turned away, labor activists haven’t forgotten the sacrifices of last year’s protests. After facing down bullets, they won’t be daunted by their bosses’ threatening words.