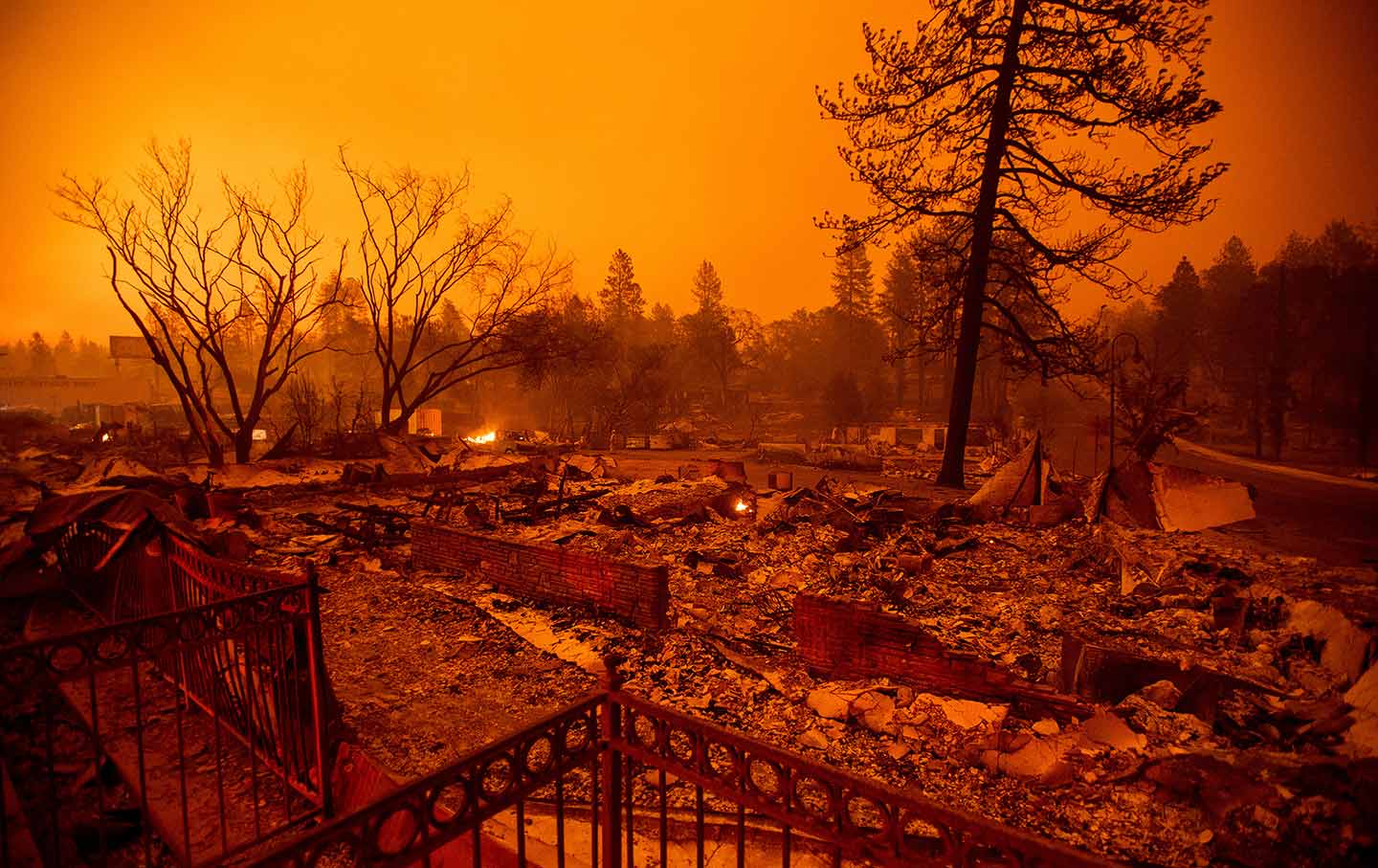 What I remember most strongly is the light: a soft, reddish golden color that felt more suited to a tropical sunset than a leisurely Sunday morning in the Bay. It was October 1991, and two friends and I had arrived the night before at the home of a family friend in the hills above Oakland. Over coffee, we noticed the acrid smell of smoke. I went outside and spotted flames crawling down the hillside opposite the house. By the time we got in the car, the fire had jumped several hundred yards. We tried to drive out, but the brush was in flames on both sides of us and the road ahead was obscured by smoke. Rather than taking our chances driving through it, we abandoned the car and ran down the hill, fire licking at the tree trunks all around us.

I’ve thought about that moment a lot this week while looking at the photographs of burnt-out cars lined up along a highway a couple of hundred miles north of Oakland, the only road leading out of a town called Paradise. That day in Oakland, 25 people died. It was, until this month’s Camp Fire, the second-deadliest wildfire in California’s recorded history. To an East Coast kid like me, it seemed a freakish bit of bad luck. Or good luck, for those of us who made it out.

Later, living in Los Angeles, I would almost get used to the eerie, golden light of sunshine filtered through giant clouds of smoke. As sure as snow in a New England winter, the fires arrived in the late summer when the hot Santa Ana winds began blowing in from the desert through hills that were dry after months without rain. Farther inland, the fires started earlier, as soon as it got hot. When they were close enough, ash fell like snow. But in October, or November at the latest, the rains would arrive. The sky would be wiped clear again and the danger pushed back until summer returned.

Those predictable cycles are over. In 2009, 8,700 acres burned in the hills above Santa Barbara in May, before summer had even started. That’s normal now, to whatever degree that word still pertains. The Thomas Fire, which tore through more than 280,000 acres across two Southern California counties, began early last December and kept burning until June—for the entirety of what should have been the rainy season, in which wildfires are not supposed to burn. Since 2000, according to one 2016 study, hotter, drier weather has lengthened the fire season by nine days each year. It is no longer useful to think in terms of seasons. Throughout the West, most of the time, some places are burning, and others are not.

Right now, Malibu is burning too, and so is Thousand Oaks, but Paradise will bear the unwelcome honor of becoming the second town this year to be almost entirely incinerated. In August, only two homes were left standing in the northern hamlet of Keswick. The Camp Fire, which leveled Paradise, has so far wrecked 8,650 homes and killed 56 people, many of them while they were sitting in their cars. Another 130 are missing. Last Sunday, it topped the grim second-place record for fatalities still held by the Oakland Hills fire and went on to grab the first-place title too. In its first 24 hours, it had destroyed more property than any other California wildfire, beating a record set in Napa and Sonoma counties last October. It has already razed 216 square miles and was only 35 percent contained on Thursday morning, but it still has a ways to go before it takes the title for the most acreage burned—that honor went to a blaze that raged through Mendocino and three other northern counties this past July and August.

No one is boasting, but new records are broken every year. Sixteen of the largest fires in California history have occurred over the last 19 years, two of them since last December. Scientists tend to be cautious about linking individual disasters to human-induced changes to the climate, but this year, with wildfires breaking out north of the Arctic Circle in Sweden—and in Norway, Finland, and Russia—few are hesitant to make the link. The evidence is piling up. One 2016 study found that, since 1984, anthropogenic climate change has doubled the area over which forest fires roam and burn in the West. Another study, published last year, found that “human influences” had quintupled the risk of extreme aridity in the West, increasing the probability of catastrophic wildfires. And still another predicted that the acreage burned by wildfires in Southern California alone could jump by more 60 percent by mid-century. As bad as things are, they will get worse.

This painful reality is getting harder to deny. Major outlets are no longer covering wildfires merely as isolated weather events and human-interest stories. Grassroots momentum is building—from the 21 kids suing the federal government for its inaction on climate change to the activists facing prison for blocking the construction of the Bayou Bridge Pipeline in Louisiana. And state and local officials, from Governor Jerry Brown to LA fire chief Daryl Osby, have been shouting to counter the Trump administration’s insistent denials that the fires have anything to do with climate change.

Still, in Washington, DC, Republican mendacity continues to conspire with Democratic silence. For all the lives it is upending, in most of the country climate change was not a defining issue in the mid-term elections. And with some notable exceptions—such as Alexandria Ocasio-Cortez, who joined a protest demanding a “Green New Deal” outside Nancy Pelosi’s office on Tuesday—the emboldened Democrats have shown little interest in making it one. The party still has no policy platform on climate change, and no plan—except, apparently, to profit from the status quo: In August, as fires raged through northern California, the Democratic National Committee passed a resolution to “welcome” donations from the fossil-fuel industry, reversing a ban it had voted in two months earlier. This would be corrupt and cynical in the best of circumstances, even if the status quo weren’t literally in flames.

I made it out of the Oakland Hills fire because somebody helped me. We ran down the burning hillside until we hit a road and flagged down a ride. That driver kicked us off—we were sitting on his trunk and he wanted to drive faster—but another car slowed and took us all the way to safety. No one is going to rescue us this time. Which means it’s up to us, as always. We have no choice but to learn to help each other, to tear down the systems that are killing us, to find new ways to live on and with the planet. The light is strange and the skies are getting darker, so we will have to do it fast.