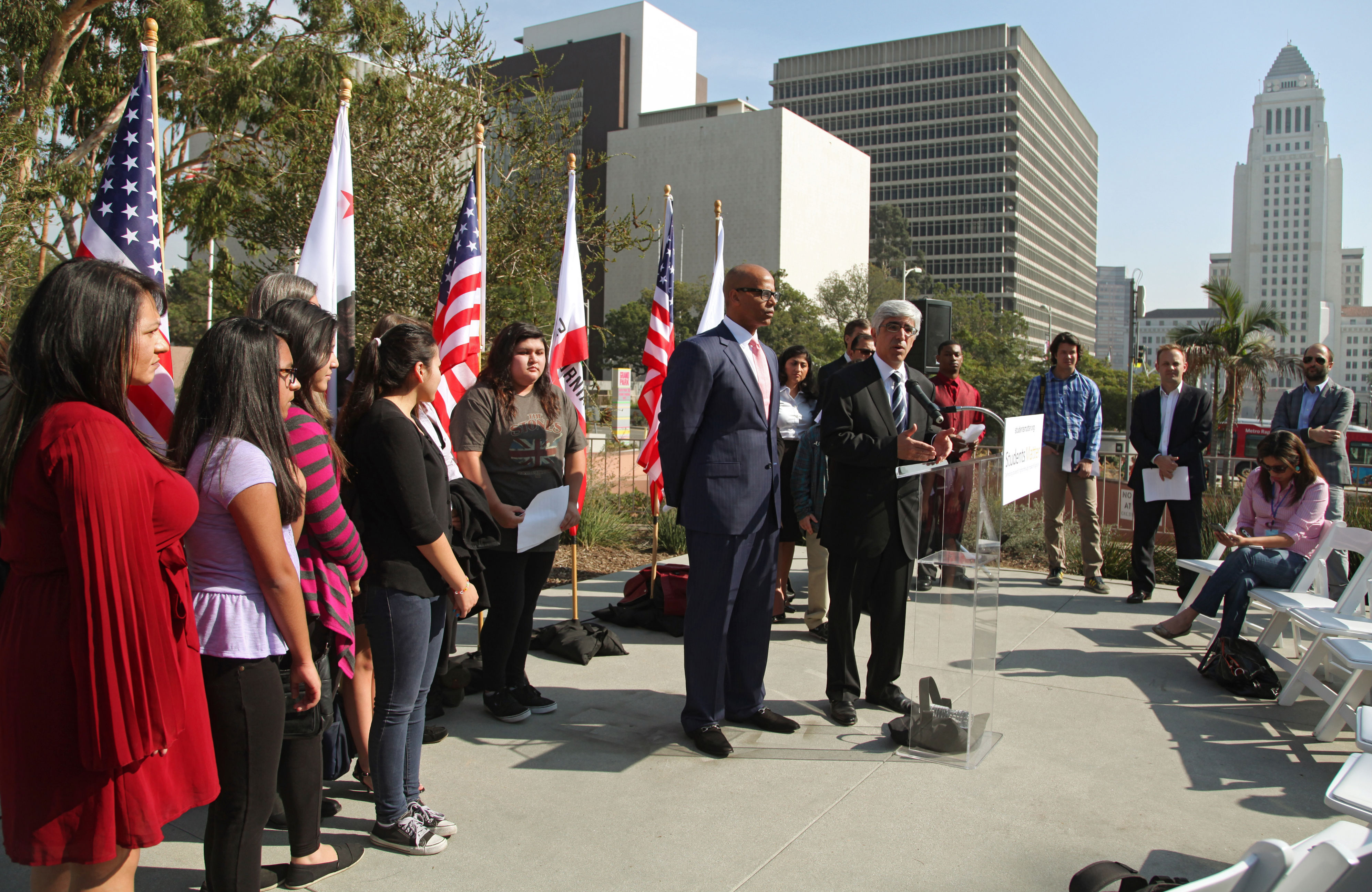 Two kinds of people in California have a problem with public school teachers: high schoolers who hate math class, and education reform ideologues who despise teacher unions. On Tuesday, those two forces high-fived in court after scoring a legal victory against labor protections for educators.

Throughout the trial in Vergara v. State of California, reform advocates alleged that the rules of tenure—the due process procedures that govern the dismissal and layoff of senior public school teachers—are unconstitutional because they violate the the state constitution’s statutes on equal protection and educational equality. The plaintiffs, nine California public school students, claimed that subpar teachers did such a bad job that they violated students’ educational civil rights. Moved by their testimony, Judge Rolf Treu sided with the disgruntled youth, citing the principles established in Brown v. Board of Education to assail tenure as a violation of children’s entitlement to an equal education.

Two unions, California Federation of Teachers and California Teachers’ Association, have announced that they will appeal, calling the lawsuit “fundamentally anti-public education, scapegoating teachers for problems originating in underfunding, poverty, and economic inequality.”

But already, hardline reformers are gunning to use a similar legal strategy to dismantle tenure in other states. Helming the campaign is StudentsFirst, an aggressive national lobbying organization run by former DC Schools Chancellor Michelle Rhee.

The decision mirrors the reform movement’s rhetoric: (1) teachers are directly responsible for their students’ performance, (2) ineffective teachers diminish students’ future economic prospects and (3) therefore anything that needlessly prevents schools from canning “bad” teachers must be abolished in the name of equality. Tenure rules, Treu declared in the tentative decision published this week, had “resulted in grossly ineffective teachers obtaining and retaining permanent employment, and that these teachers are disproportionately situated in schools serving predominantly low-income and minority students.”

Except education is slightly more complicated than that. Corporate-minded reformers, who see urban schools as petri dishes for behavioral economic research, assume that with the right inputs, inequality can be fixed by restructuring personnel. But progressive education advocates say that while teacher quality can deeply influence a child’s academic growth, responsible education policy should take into account the school’s overall social conditions. Focusing on the “metrics” of individual teachers often ignores (or deliberately distracts from) crucial factors outside teachers’ control, such as poverty and violence in the surrounding community, or the policy and management decisions of principals and education officials.

Frank Wells, a former English teacher and now spokesperson for the CTA, tells The Nation that while teachers understand first-hand that “there are definitely inequities in the system,” scrapping tenure scapegoats educators. “There’s no child being given unequal protection because of these [tenure] laws. These laws do not assign teachers to these schools. School districts and principals do.”

While opponents ridicule tenure policies as a “permanent employment” guarantee, in essence, the concept of tenure guarantees only a fair hearing. When faced with the threat of dismissal, Wells explains, teachers who have earned tenure, generally after two years on the job, have the right “to appeal the decision and have it looked at by an independent body, to make sure there are valid reasons, that the teacher really is not performing and is doing a disservice to kids.”

As a labor-rights precept, Wells adds, tenure is intended not to keep teachers from being dismissed when there is “a legitimate cause to do so,” but rather to “protect teachers who do belong in the classroom from being fired for arbitrary reasons—for speaking out on behalf of kids, on behalf of safety issues.”

Currently, according to the National Council on Teaching Quality, twenty-nine states have laws that list “ineffectiveness” as grounds for dismissing a teacher, not including California, and all but four states allow multiple appeals of dismissal decisions.

But beyond dismissal policies, the very definition of “effectiveness” was on trial in Vergara. While educators and reformers agreed that the school system suffers from inequality, each side advanced diverging visions of how to judge education quality.

Teacher advocates counter the anti-union, pro-firing rhetoric behind the lawsuit by positively linking increased education quality to robust labor rights. Far from coddling “grossly ineffective” teachers, they argue, the job security provided by tenure is critical to the quality of their work. The promise of career stability helps draw excellent teachers to the profession and helps schools retain an experienced workforce.

In fact, research by progressive scholars shows that experience and retention, along with a supportive work environment, are integral to developing a capable teaching workforce. If plaintiffs were concerned with equality, the opponents noted that struggling schools in high-poverty communities of color tend to suffer disproportionately from high turnover and less-experienced teaching staff.

The Vergara trial hinged on the framework of “accountability” that has fueled the Obama administration’s education reform agenda. Initiatives like Race to the Top grants and the Common Core curriculum guidelines have pressured school districts to emphasize standardized testing, data and ranking. Just as tenure reform makes it easier to fire teachers, this data obsession pushes districts to flunk more students and label schools as “failing.” And not surprisingly, those labeled failures tend to be poor kids of color.

Advocates say that to close the socioeconomic achievement gaps that reformers claim to be addressing, the real fix isn’t a sudden injection of pedagogical genius but a more elementary remedy: concrete resources to hire more qualified teachers and support staff, and to fully fund programs, so students can reach their full academic potential in a nurturing, dignified environment.

To that end, Duane Campbell of the Democracy and Education Institute in Sacramento noted that “a teacher union-led campaign—along with union allies” were instrumental in pushing through major increases in education investments in this year’s state budget. As for the big reform groups, he quipped, “Where were the corporate ‘reformers’ and the Democrats for Educational Reform, Student[s]First, Michelle Rhee crowd during the campaign to fund the schools? Absent.”

The philosophy of the Vergara ruling reveals the problems of “reforming” education into a commercial service—reducing teaching and learning to a mechanical churn of reward and punishment. Meanwhile, educators are already telling us about what their classrooms need to thrive. Listening to teachers might be a better way to fix schools than looking for new ways to kick them out.