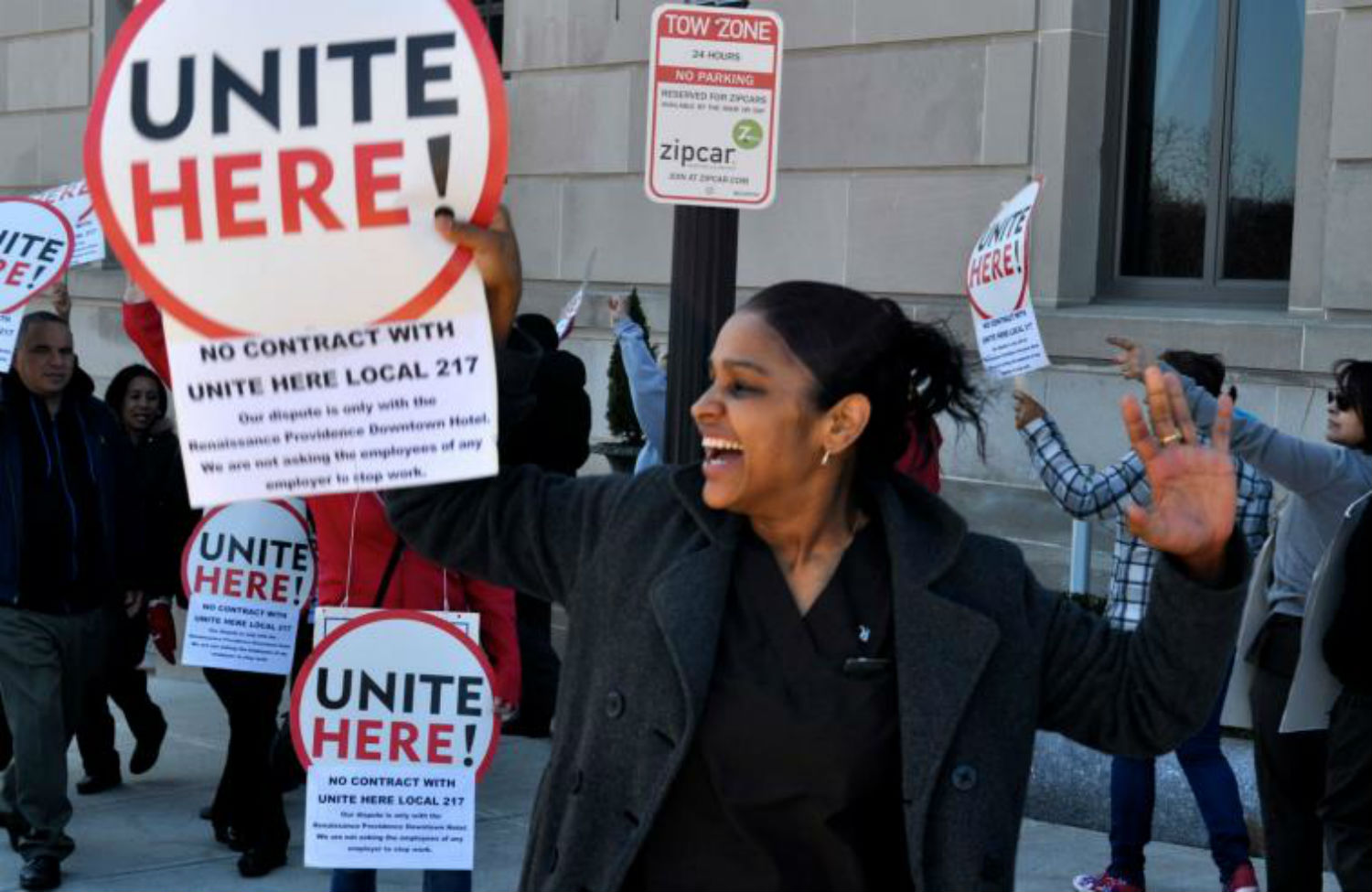 Santa Brito, a housekeeper at the Renaissance Hotel in Providence, Rhode Island, was cleaning rooms the day her water broke. “I was afraid,” she said. “I kept working throughout my pregnancy because people said the company was very aggressive.” Raquel Cruz, also a housekeeper, told The Nation that managers at the Renaissance refused to give her and other pregnant women light duty, even when their doctors ordered it. “At thirty to thirty-five weeks, they still want you to do the same job, the same number of rooms. And you have to keep working because otherwise you lose your job.” A week after giving birth, Brito called the hotel. “They told me they didn’t know when I could come back to work.… They told me they couldn’t guarantee my job.” A week later she was fired.

In 2011, the Renaissance gained some unwanted notoriety when Joey DeFrancesco quit his job at the hotel with the help of his bandmates in the What Cheer? Brigade. A video of Joey’s raucous exit has 4.3 million views on YouTube. “They were stealing our tip money, paying us poverty wages, making us work double or triple shifts,” DeFrancesco told The Nation. “When I quit, I didn’t want to go quietly.” Last March, in response to this ongoing cycle of abuse, 75 percent of Renaissance workers signed a petition demanding a fair process to join a union. Since then, they’ve held informational pickets outside the hotel almost every Wednesday. The Renaissance—owned by the Procaccianti Group—has responded with an intense anti-union campaign. Raquel’s husband, Marino Cruz, who also works at the Renaissance, says that as soon as the workers went public with their demands, the managers “started attacking the leaders. Giving them more work. And looking for excuses to fire them.”

On December 4, the workers escalated their campaign by declaring a boycott. “Our bodies suffer from the work yet we live on the edge of poverty,” the workers’ statement read. “We ask all people of good conscience not to patronize the Renaissance Hotel until we are able to work and live with dignity.” The Unitarian Universalist Association, which had intended to have its convention at the Renaissance, canceled 847 reservations. Local politicians voiced their support. And last week, thanks to the combined efforts of students and hotel workers, the Brown University Community Council (BUCC) voted to discourage the Brown community from patronizing the Renaissance.

Since the fall, members of Brown’s Student Labor Alliance (SLA) had been marching with Renaissance workers on the picket lines, providing a welcome burst of energy to the weekly demonstrations. But when the boycott started, students hatched a plan to use Brown’s clout in the Providence hospitality industry—the university brings thousands of parents, alumni and visiting scholars to the city each year—to support the workers’ effort. “We have certain leverage at Brown to transform the everyday lives of working people in our community,” says Mariela Martinez, a senior SLA member who goes by the name Mar, “We have to use it.”

Moving fast, SLA members drafted a resolution in support of the boycott and secured a spot for the issue on the agenda at the next BUCC meeting in February. They invited workers from the Renaissance to attend and share their stories. It’s part of SLA’s job, Martinez says, to force the administration to confront the lived experiences of people who they might otherwise see as nothing more than the service they provide. “It’s really easy to be stuck in an office on College Hill, and not be touched by these stories,” she told The Nation. “What student labor alliance does is bring the human aspect of the workers’ lives and stories to the forefront.”

Since Procaccianti bought the hotel in late 2012, those stories have only gotten worse. For months, workers complained to managers that new cleaning chemicals were burning and irritating their hands and faces. Nothing was done. Then an OSHA investigation revealed that the hotel had been using faulty spray bottles with mismatched tops and providing poor hand protection. Noxious chemicals were spilling all over workers’ skin. When I spoke with Raquel Cruz, she showed me burn marks still visible on her hands. Her husband Marino said coworkers exposed to the chemicals were still getting rashes and nosebleeds. The hotel was fined $8000 for the OSHA violations.

At the meeting in February, the students presented their case for a resolution in support of the boycott—citing a similar measure passed in 2011 during a labor dispute at a unionized hotel. Santa Brito, who has become one of the fiercest leaders in the hotel since getting her job back (with the help of the Department of Labor), told her story. She lifted her sleeves to show the burn marks on her forearms. She talked about her child. But either because the students had gotten on the agenda too late and had already used up their time; or because the councilmembers, unable to understand Brito’s rapid Dominican Spanish, couldn’t adequately gauge the gravity of what she was saying; or because of something else, more tragic and obvious than either of those, the facilitator of the meeting—President Christina Paxson herself—interrupted Brito and said they would have to table the matter for another time. The meeting ended without a vote.

Many SLA members were outraged. They felt as though the council had deliberately marginalized Brito and her story. But they were also galvanized. “You have to go through the official channels,” Martinez explained, “Not because you believe they will work, but because when they don’t work, it shows how corrupt the system is.” That moment “when Santa was cut off,” Martinez said, “was a concrete demonstration of how workers’ stories are brushed to the side at Brown.” Over the course of the next month, SLA went outside the “official channels,” passing out hundreds of leaflets at Brown’s extravagant 250th Anniversary events, getting media coverage on campus and raising awareness. They collected hundreds of petition signatures and met with individual members of the BUCC to win their support.

In early March, there was another BUCC meeting. SLA packed the room with supporters. Once again, workers came and shared their stories, adding to the ever-growing list of grievances against the Procaccianti Group. (A pending NLRB complaint contends that the hotel’s anti-union tactics violate the NLRA.) And this time, after some nitpicking over the language, the council voted almost unanimously in support of the resolution, which “encourages the Brown community to take all appropriate measures to avoid holding any events at the Renaissance during the current labor dispute.”

The resolution does not use the words “union” or “boycott.” Marisa Quinn, Brown’s vice president for public affairs, told The Nation that the resolution merely requires the university to “provide information” so that “visitors can make individual choices regarding hotel options.” She affirmed, however, that Brown’s events services and purchasing department “will refrain from using the hotel” until the dispute is resolved. Quinn, the only person on the council who did not support the resolution, says she “would have preferred to wait until after the NLRB review” to take action.

Still, the resolution is a victory. And the workers are grateful. “The students have supported us an incredible mount,” said Marino Cruz. “They’ve really had our backs, and we’re ready to support them in whatever fight comes.” This idea of reciprocity, of fighting each other’s fights was something I heard again and again from workers at the Renaissance. It’s a labor movement thing (an injury to one…), but it has a different resonance when applied to the relationship of solidarity between low-wage service industry workers and students at an Ivy League college.

Martinez, who comes from a working-class family in South-Central Los Angeles, was sheepish when I told her about all the gratitude expressed by Marino and Raquel Cruz. “Whenever they say stuff like that, we say, ‘No it’s actually all of you that inspire us, we’re doing the little bits that we can, but the reason we do this is that we’re already so astonished by the work that you are doing.’” Martinez feels this especially strongly about the Renaissance workers. “They are facing real intimidation on a daily basis.… We’re just going to class and going to meetings. We’re not in any real danger.”

But Marino Cruz doesn’t see it that way, “They may go to a wealthy university and live different lives than us, but they have noble hearts, they have pure hearts. They are fighters, just like us.”

For his part, DeFrancesco has sought to use his erstwhile YouTube fame to amplify the message of the Renaissance workers, maintaining a website where service workers across the country can share their stories of abuse and resistance. “The organizing my co-workers continue to do is obviously way braver and far more important than the viral stunt I pulled,” he told The Nation, “Fighting—not quitting—is what actually wins better working conditions.”