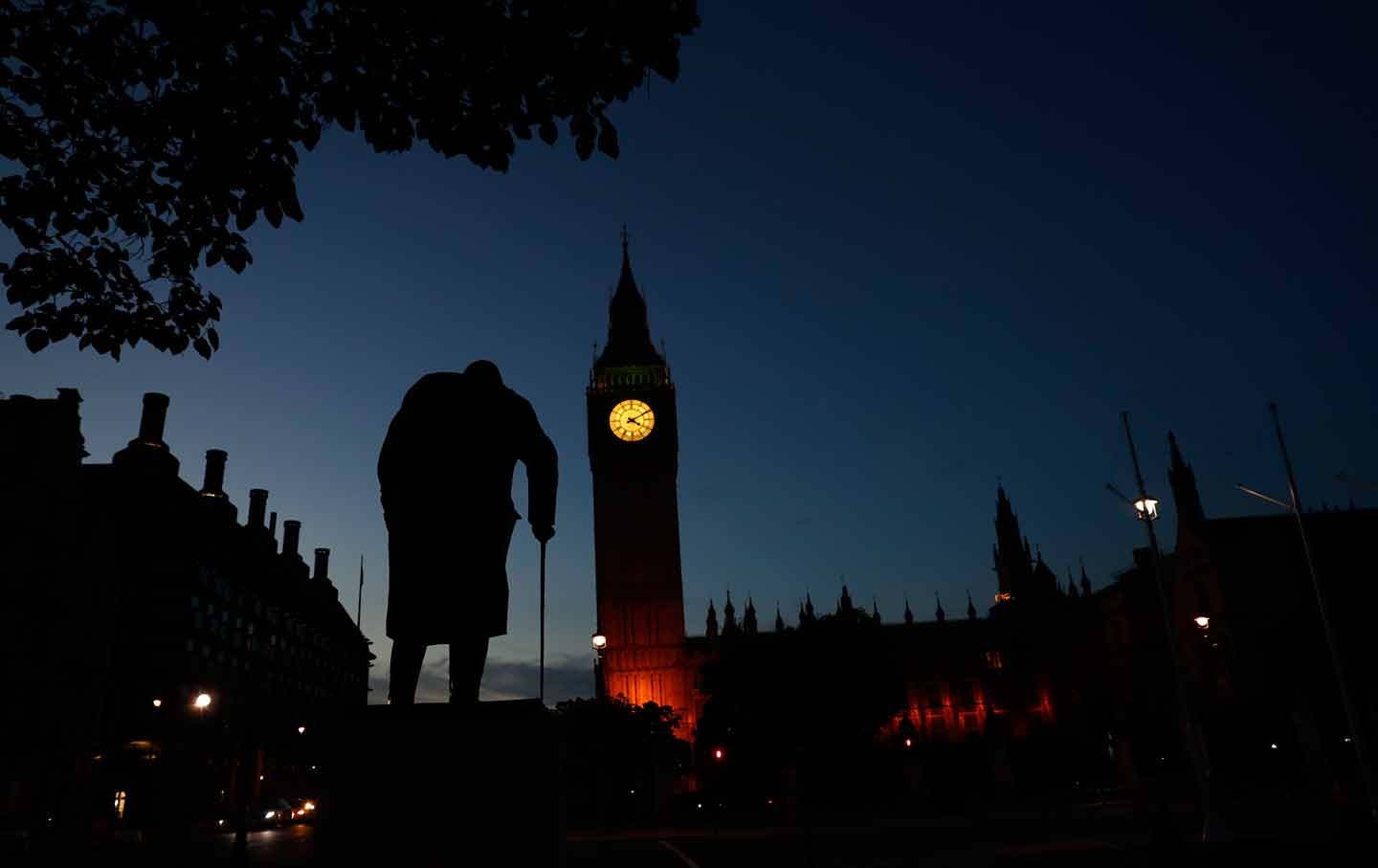 Dawn breaks behind the Houses of Parliament and the statue of Winston Churchill in Westminster, London on June 24, 2016, the morning after the Brexit vote. (Reuters / Stefan Wermuth)

In a normal country, the stunning rebuke the British public delivered to the country’s political establishment last week by voting to leave the European Union would be an occasion for humility, soul searching, and, above all, a recognition that it wasn’t only the pollsters who kept predicting a “Remain” victory that were fatally out of touch. For a few hours on Friday morning, as the implications of what had just happened sunk in—the likely unraveling not just of Britain’s ties to the rest of Europe, but of the United Kingdom itself, with Scottish independence back on the agenda, Northern Ireland’s Good Friday agreement seriously undermined, and the whole European Union now at risk of dissolving under a rising tide of nationalism—Britain was that country. London, a cosmopolitan capital that voted overwhelmingly to remain in the EU, was a city in shock. Prime Minister David Cameron, who’d bet his own political future on a “Remain” vote, had resigned. The pound was in free fall, and as the scale of the self-inflicted damage to the economy became clear—the FTSE 100 Index lost £120 billion, its biggest drop since the 2008 financial crisis—the national mood was one of desperation rather than celebration.

By Monday, mourning and melancholia had given way to mania. In Britain, the rush to sign an online petition calling for a second referendum was so intense that it crashed Parliament.uk. The Belfast post office ran out of application forms for Irish passports. In Wales—which, despite getting more EU funds than any other part of the UK except Cornwall, voted to leave by a 2.5 percent margin—the Labour government scrambled to protect the region’s already precarious economy. And Cornwall itself, which also voted to leave, issued a plaintive plea to “protect” its EU subsidy. Meanwhile, UK Independence Party leader Nigel Farage admitted that his campaign’s claim that leaving the EU would free up £350 million a week to spend on the National Health Service was a “mistake,” and Daniel Hannan, a leader in the Tory Brexit camp, said that voters who expected the winners to deliver on their pledge to restrict EU immigration were “going to be disappointed.”

Cameron’s announcement that he would leave it to his successor—who likely won’t even be elected until the Conservative Party Conference in October—to trigger Article 50 of the Lisbon Treaty, starting the two-year clock on setting the terms of Britain’s withdrawal from the EU, only added to the sense of chaos, with Jean-Claude Juncker, president of the European Commission, saying “it doesn’t make any sense to wait.” Though that sense of urgency was echoed by both the French and German foreign ministers, it was notably not shared by Boris Johnson, the New York–born figurehead of the “Leave” campaign (and current favorite to replace Cameron), who declared: “I cannot stress too much that Britain is part of Europe, and always will be,” adding that changes to the country’s relations with the continent “will not come in any great rush.”

This widespread confusion left the Labour Party with an open goal—if it hadn’t chosen just that moment to tear itself apart, with more than 40 members of party leader Jeremy Corbyn’s shadow cabinet either resigning or getting fired, and deputy leader Tom Watson insisting that Corbyn had lost the confidence of his colleagues in Parliament. Corbyn determined to fight on, and thousands of his supporters packed Parliament Square on Monday—though most of the signs they carried had been printed by the Socialist Workers Party. The next day, Corbyn lost a vote of confidence by Labour MPs by an overwhelming margin, but actually forcing him out would require another leadership election, which could take weeks to organize, and which he might well win. Meanwhile, with both major parties essentially leaderless, Britain is in danger of becoming a zombie state, staggering through the summer with no effective government or opposition, the world’s fifth-largest economy—since Friday, the sixth-largest—at the mercy of panic and rumor, facing a stampede by both global capital and European labor for the nearest exit.

How did we get here? The immediate cause of the crisis was Cameron’s promise in 2013 to hold a referendum on British membership in the EU, a move designed to neutralize the electoral threat of Farage and the UKIP, which had only managed to elect a single member to Parliament. Cameron also hoped to finally settle a question that had divided his party for decades. With nearly every leading economist backing Chancellor George Osborne’s warning that a decision to leave would trigger a do-it-yourself recession—and with Labour and the Liberal Democrats both committed to remaining in Europe—Cameron doubtless assumed the voters would choose prudence over protest.

Instead, the debate unleashed the furies of racism and xenophobia—and exposed the yawning chasm between the elites, both in the government and the media, and the people for whom both Tony Blair’s “Cool Britannia” and Cameron’s “compassionate conservatism” were never more than cruel jokes. As social media exploded over the weekend with denunciations of the “Leave” campaign’s many lies and distortions, and plaintive cries for some kind of do-over from “Remain” voters in London, the most penetrating and persuasive analysis of the vote came from John Harris, a Guardian reporter who has spent the past six years traveling the country looking at politics from “anywhere but Westminster.” Others had underlined the age distribution—with younger voters overwhelmingly in favor of “Remain,” while those 45 and over tilted toward “Leave”—or the geographic gaps: Though Scotland, Northern Ireland, London, Liverpool, and Manchester all voted strongly for “Remain,” from Orwell’s Wigan to Wordsworth’s Cumbria to Shakespeare’s Stratford-upon-Avon, the English people decided they do not want to be European anymore. But Harris noticed it was actually about class, with the losers in globalization’s race to the bottom using the only weapon they had to strike at a system that offered them nothing.

“What defines these furies,” writes Harris, “is often clear enough: a terrible shortage of homes, an impossibly precarious job market, a too-often overlooked sense that men (and men are particularly relevant here) who would once have been certain in their identity as miners, or steelworkers, now feel demeaned and ignored. The attempts of mainstream politics to still the anger have probably only made it worse: oily tributes to ‘hardworking families’, or the…trope of ‘social mobility’, with its suggestion that the only thing Westminster can offer working-class people is a specious chance of not being working class anymore.” Replace the word “Westminster” with “Washington” and then try to tell me that’s an unfair description of what our own politicians—Democrats and Republicans alike—have been offering America’s workers.

Though it’s far too soon to say what will happen next—especially since, as we now know, neither side took the possibility of a Brexit victory seriously enough to make plans—we can be reasonably certain about what won’t happen. Despite the fervent wishes of my North London neighbors, there won’t be a second referendum. It’s true that when the Danes rejected the Maastricht Treaty in 1992, they were made to vote again. Likewise the Irish, who voted down the Lisbon Treaty until they changed their minds. But those were mere treaties. This was a vote on Britain’s future. Though the referendum itself isn’t legally binding, Parliament can’t simply ignore the results—not without the real risk of blood in the streets.

There is one path back from the abyss—narrow but not impossible. If Cameron’s successor calls a snap election—more likely than not, given what happened to former prime minister Gordon Brown’s political fortunes when he failed to seek an electoral mandate—and the Labour Party unites behind a leader and a platform committed both to staying in Europe and to ending austerity, that would give voters not just another chance but a real choice. Since in British law Parliament alone is sovereign, only a parliamentary election fought between parties who took clear and opposing positions on membership in the EU would have both the legal and democratic legitimacy to overrule the referendum. For that to happen, though, the young Labour supporters who brought Corbyn to power, and who have just been robbed of their European future, may have to decide that they care less about loyalty to a particular leader and more about the business of gaining and wielding power—first inside the Labour Party, and then across the country. Whoever leads Labour would also have to overcome the party’s traditional refusal to work with the Scottish Nationalists, whose leader, Nicola Sturgeon, was the most credible politician on the “Remain” side.

Meanwhile, Americans who have been assuring themselves it can’t happen here need to take a hard look across the Atlantic. Though divided by politics, for months the elites of this country—Conservatives, Labour, and in the media—shared a complacent conviction that the British people were far too sensible, or cautious, or fearful, to be lured by the sirens of nationalism. Every day the press exposed another lie by the Brexit campaign, pointing out that most EU immigrants had jobs and paid taxes, and that Britain, which had access to the world’s largest free market without having to convert to the euro or dispense with border controls, actually had the best deal in Europe.

But no one ever told the people whose jobs had been destroyed by globalization how they were going to find prosperity again. And no one ever convinced the people who had already lost control of their schools and hospitals—even their pensions—that the “Leave” campaign’s brilliant slogan “take back control” was just another hollow promise. Instead they were lectured to, and bullied, and threatened with “higher food prices” by the bosses of the same chain stores that hollowed out their towns. All in the name of a distant union that, to them, promised only more of the same.

Who voted for Brexit? People already convinced the future belonged to someone else. People with nothing left to lose. If you don’t think we have people like that in America, you haven’t been paying attention.

Listen to D.D. Guttenplan talk about Brexit and Clinton on this week’s Start Making Sense podcast.