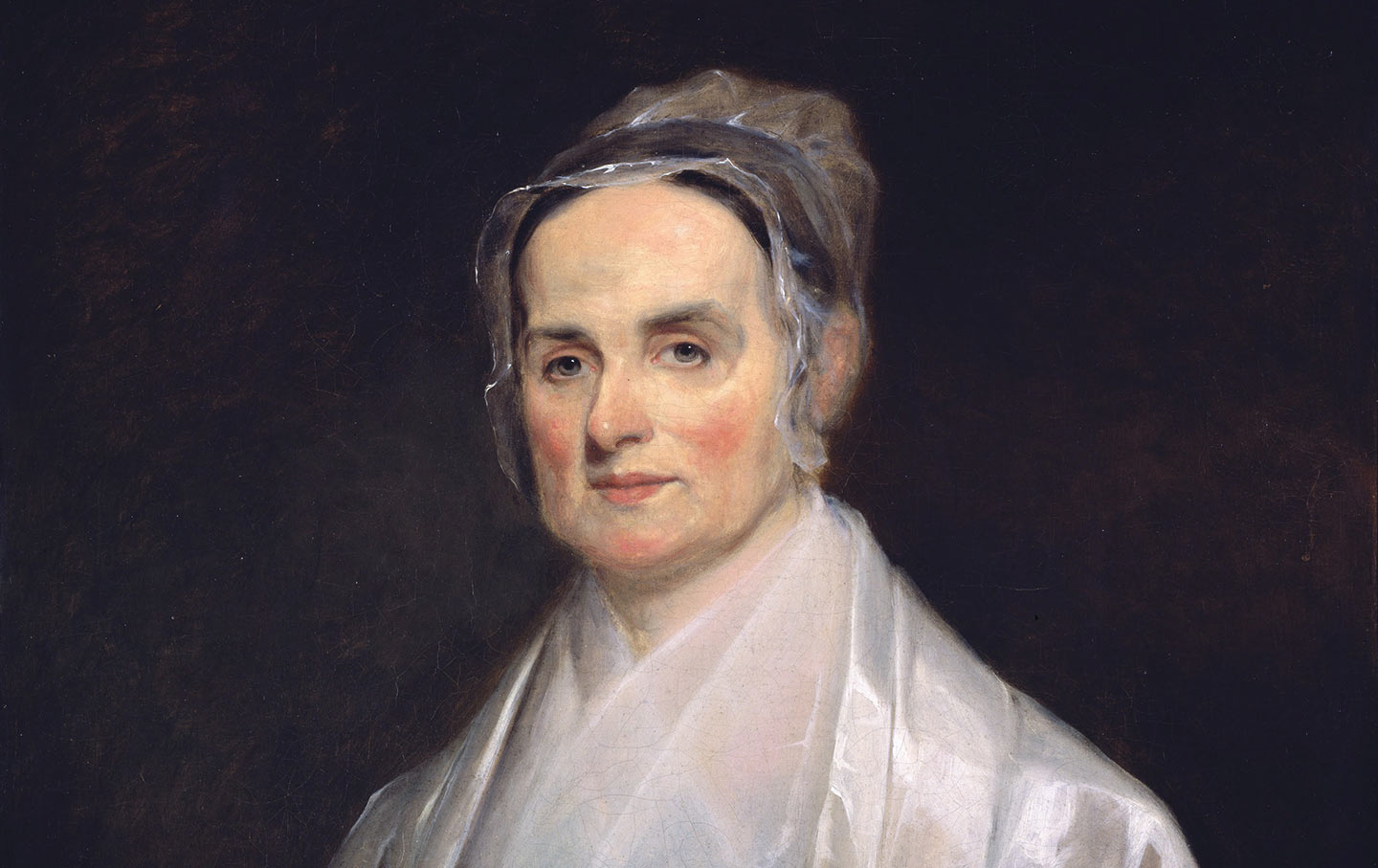 Lucretia Mott did not wear cotton. Wool was her choice of fabric for the long Philadelphia winters; she wore linen or silk when the weather was hot. Her husband, James Mott, had for a time worked as a cotton merchant, but ultimately quit to trade in wool. He left for the same moral reasons that drove Lucretia’s abstinence: As adherents of the Free Produce Movement, an abolitionist effort led by Quakers in the decades leading up to the Civil War, the Motts did not buy or consume any goods made with slave labor—period. This meant that in addition to abstaining from buying or wearing cotton, the Motts went out of their way to buy staples like rice, coffee, and tea, and nonfood items like tobacco and indigo dye from sources besides the American South or the Caribbean. Lucretia was even particular about her sweets: maple sugar over cane.

The boycott endures as a familiar facet of American political life more than 150 years later, with the MAGA-hat crowd refusing to buy Nike products and LGBTQ allies avoiding Chick Fil-A. Not to mention the Boycott, Divest, and Sanctions (BDS) movement, one of the most pointed efforts to bring an end to Israel’s occupation of Palestinian land in the West Bank. In action, if not in spirit, all these efforts have roots in the actions of abolitionists like Lucretia Mott. “A lot of our modern-day consumer activism, they’re drawing on the tactics of the Free Produce Movement—even if they’re not aware that they are,” said Julie Holcomb, author of Moral Commerce: Quakers and The Transatlantic Boycott of the Slave Labor Economy and a professor of museum studies at Baylor University.

The idea that buying products like sugar supported the institution of slavery was already well established when the Free Produce Movement began in the United States in the 1840s. In 1790, Thomas Jefferson—a slave owner and the original booster of local American foods—wrote about the interest there was at that time in increasing maple sugar production, remarking, “What a blessing to substitute a sugar which requires only the labor of children for that which is said to render the slavery of blacks necessary.” In England, there were boycotts of sugar from the West Indies in the late 1700s and the 1820s, both of which were concerned with far more than the inconvenience of slave labor as Jefferson saw it. But even after the abolition of slavery in the United Kingdom in 1833, there continued to be imports of slave-produced goods, and it was British Quakers who founded Free Produce in an effort to cut the UK’s economic ties to slavery.

In the United States, the movement also started within the Quaker Society of Friends, and many of those who were most deeply involved were themselves Quakers. But Free Produce eventually gained a following outside the church, and for a time had the support of leading abolitionists. William Lloyd Garrison, the white publisher and journalist behind the abolitionist paper The Liberator, was an early supporter. Black abolitionists such as the lecturer Frances Ellen Watkins Harper were on board too: Harper said she preferred buying dresses made without slave-produced cotton, a decision that allowed her to be thankful “that to procure a little finer muslin for my limbs no crushed and broken heart went out in sighs,” she wrote in a letter, “and that from the field where it was raised went up no wild and startling cry unto the throne of God to witness there in language deep and strong, that in demanding that cotton I was nerving oppression’s hand for deeds of guilt and crime.”

Why Americans Should Support BDS

The same thinking—that it’s better to buy products that we believe are made without exceptional suffering—animates some contemporary conscious consumerism. The desire to minimize the harm we cause as consumers has led to a variety of fluffy marketing terms as well as third-party verification organizations, so you can buy everything from cruelty-free makeup to Fair Trade food products. And while there’s no on-package label to guide adherents to the BDS boycott, it’s easy to, say, not buy feta cheese from Pastures of Eden, which is Israel’s largest dairy company, when a number of comparable products are usually stocked in the same dairy case at Trader Joe’s (though finding a retailer that does not buy Israeli products at all would certainly be harder).

When SodaStream was the subject of BDS boycotts because the Israeli-owned company has its factory in the West Bank, the market provided easy alternatives too. “There are lots of other ways to get your seltzer,” said author and scholar Bruce Robbins, whose recent book The Beneficiary looks at the ways 20th-century intellectuals—notably, George Orwell—thought about the exploitation that was involved in many of the things they enjoyed. (The company has since been sold, and the factory relocated.) “It’s aimed at the Occupied West Bank, not at a whole industry spread over a huge area. I respect enormously the English people of conscience whose prosperity depended on a supply of raw cotton and took antislavery positions anyway, looking around at the same time for less tainted sources.”

Despite the broad support that Free Produce had in the mid-1800s, questions of sugar substitutes can seem almost trivial when looking back at the movement. At home, Lucretia was known for giving out maple candies that were wrapped in papers that bore messages like “If slavery comes by color, which God gave, fashion may change, and you become a slave,” and “Take this, my friend, you need not fear to eat. No slave hath toiled to cultivate this sweet.” Taken alone, such a boycott action feels both familiar and insufficient, like the 19th-century equivalent of a political identity that doesn’t extend beyond buying organic. But Lucretia was more than a preachy housewife, and there was muscle behind her sweet marketing of the movement. As a lifelong Quaker, she was accustomed to living with a degree of gender equality that was uncommon at the time, and she carried it into spaces outside the home and the Society of Friends. The abolitionist Robert Purvis called her “the most belligerent non-resistant he ever saw,” as she recounted in a speech at the 1860 meeting of the Pennsylvania Anti-Slavery Society. “I have no idea,” she said, “because I am a non-resistant, of submitting tamely to injustice inflicted either on me or on the slave. I will oppose it with the moral power with which I am endowed.”

For Lucretia, Free Produce “was about moral purity, and not engaging in contradictory behaviors,” said Carol Faulkner, a professor of history at Syracuse University who wrote a biography of Mott. So determined was she to not contribute to the slave-based economy that Lucretia did not support efforts to buy enslaved people in order to free them—a process that still involved engaging with a system that put a dollar amount on a person’s life. Extending that rigidity to the boycott provided a stark contrast to what complicity in slavery looked like: If you wore cotton and ate sugar, you were implicated—which meant that just about everyone was implicated.

“Free Produce was not successful if you look at it purely in terms of results,” Holcomb said. “The number of people who supported it, it was a very small movement overall. But the lasting legacy of Free Produce is that they managed to transform a consumer choice into something more”—a moral standard, a vision for the future. In that sense, the contemporary counterparts to Free Produce are not the knee-jerk boycotts but highly organized movements like BDS that use boycotts as a means to a broader end.

The spirit of Free Produce is in the United Farm Workers’ grape boycott in the 1960s, and the orange juice boycott of the 1970s—boycotts that leveraged a small amount of attention and power to show that the world could be a better, different, fairer, more inclusive place, as well as to take the first steps toward making that a reality. And it’s the same elegant idea that animates the modern prison abolition movement, as author James Forman Jr. explained in his recent New York Times Magazine profile of Ruth Wilson Gilmore. “What I love about abolition and when I identify myself as an abolitionist, this is what I have in mind—is the idea that you imagine a world without prisons, and then you work to try to build that world,” he said. Sometimes that means fighting to keep new prisons from opening; sometimes that means helping kids work through their preconceived notions about the need for a punitive justice system.

While the boycott itself did not succeed in toppling slavery, Free Produce did have a noticeable effect on supply and demand as a result of its own world-building efforts. Between 1850 and 1857, for example, maple sugar production in Northeastern states doubled, and there were new efforts to produce sorghum molasses and grow rice and cotton in non-slaveholding states as well. There was for a time a utopian community in Massachusetts called North Hampton Association for Education and Industry—Sojourner Truth was a member—that was built around a communally owned and operated silk mill.

In addition to the challenges of labor and production, there were politics to contend with. As early as the 1830s, there was violent opposition to the abolition movement in Northern states, where the promise of emancipation was considered by some to be a threat that could undermine the very fabric of society. Riots occurred in cities like New York and Philadelphia over antislavery activities, and in Boston Garrison himself was once dragged through the street at the end of a rope. Abolitionists, too, moved toward more aggressive antislavery tactics, some that involved taking up arms, and all of which ran completely contrary to Quaker pacifism and Lucretia’s brand of belligerent non-resistance.

While people did continue to buy Free Produce products, the movement dwindled in the run-up to the Civil War, and it ultimately lost the support of non-Quaker abolitionists like Garrison, who began to argue that people involved in antislavery efforts were uniquely entitled to use the products made by the enslaved people whom they were fighting for.

Free Produce may have ended with a fizzle, but its legacy can be seen throughout modern consumer activism. There is something, too, about the moral purity that Lucretia and other Quakers brought to antislavery that continued and continues to be a powerful idea. “Mott, who does not see politics as a solution, this idea that instead you were changing the society and the culture around these practices, it still remained something very powerful,” Faulkner said. “You have to change the way people think and feel about slavery, not the way that they vote.”