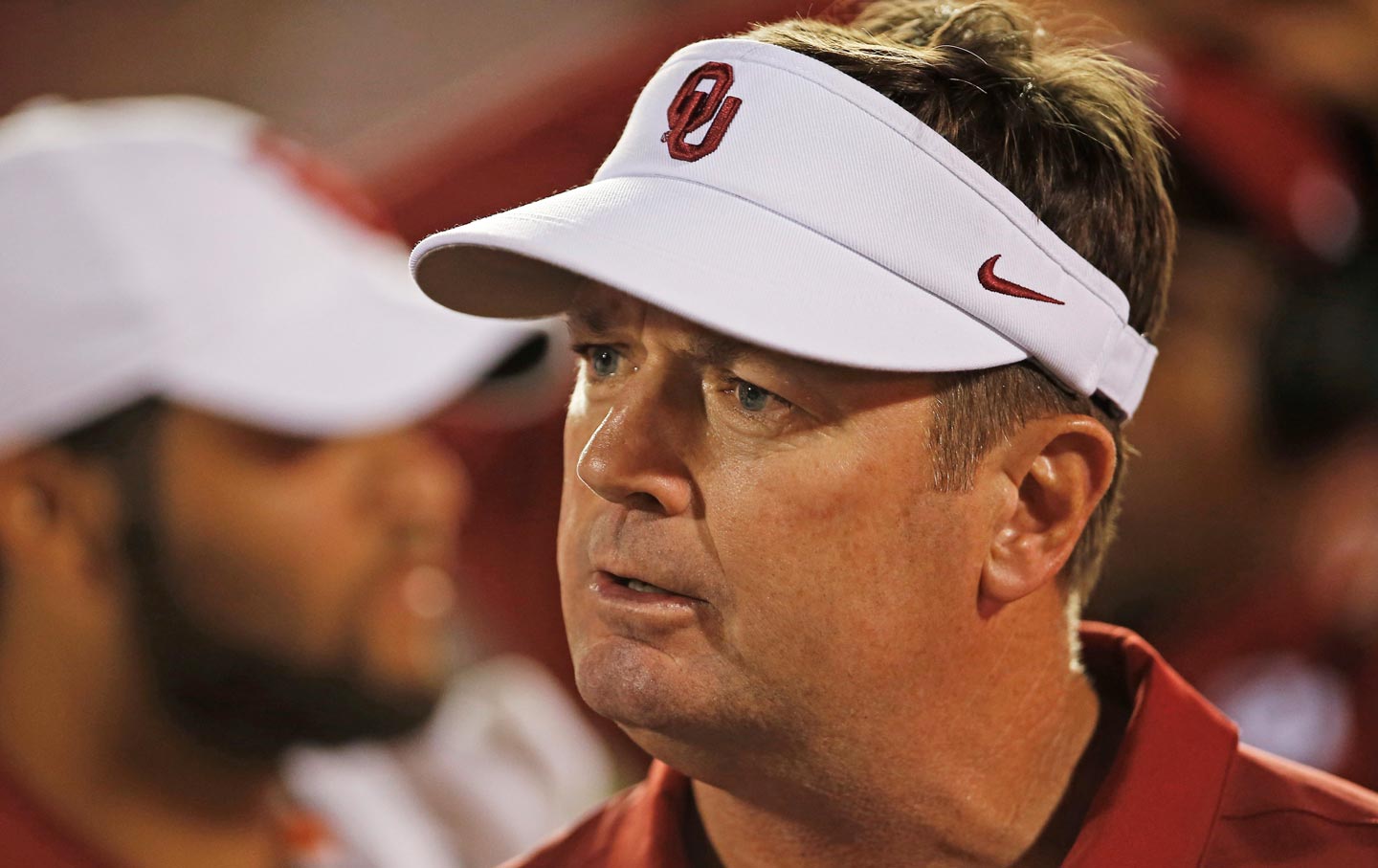 It is an insult to cesspools to call Division I college football a cesspool. Cesspools serve a legitimate societal function as a gathering point for putrid waste. College football sprays that waste like a geyser, contaminating everyone it touches. Every year there are examples of putrescence. In fact, the endless parade of scandals are critical to keeping the system afloat. Our eyes are so glazed over by the annual flip book of impropriety and misconduct that we don’t recognize how we have normalized a sports system that has become anything but normal. (This makes college football very similar to a certain recent presidential campaign.)

The sports media and college football fans seem to express a visceral revulsion at this rotten racket only when there is something that forces their faces into it. That is happening this week with the release of a 2014 video of Oklahoma University running back Joe Mixon punching a woman, Amelia Molitor, in the face, fracturing her jaw in four places. (No, we’re not linking to this video.) Everyone in power at Oklahoma saw the video in 2014, from the school’s most powerful person, head football coach Bob Stoops, to the man who serves at Stoops’s pleasure, university president and former US senator David Boren.

The decision by Stoops and his underlings back then was for Mixon to be suspended for the 2014 season and serve the sentence imposed by the local criminal-justice system: 100 hours of community service. But that’s not the story. The story is that the video of the punch has finally been released and, with it, Bob Stoops has released any moral authority he may have had.

Releasing the tape took two and a half years and a lawsuit by the Oklahoma Association of Broadcasters that went all the way to the State Supreme Court. The video is ugly as hell, showing a confrontation where allegedly anti-gay and anti-black slurs were yelled back and forth. Molitor lunges at Mixon and then he punches her in the face. Molitor’s jaw had to be wired shut.

But the issue is not the video. It’s the fact that now, with the running back about to go to the NFL—his usefulness to the school wrung out—Coach Bob Stoops held a press conference saying that Mixon should have been kicked off the team. He said, “Two and a half years later, dismissal is really the only thing that’s possible” and that “these individuals can’t have a second chance…. rehabilitation is no longer an option.” When he was asked whether keeping Mixon on the squad makes it appear like he condones violence against women, he said, “Sure to some degree it does. And I regret that. In the end, at the time, we felt it was a significant and strong punishment. And again, some people that have seen the entire [2014 video] at that time agreed. And others didn’t. I understand that, and I always knew that that was something that everybody would debate.”

It boggles the mind. Bob Stoops saw that tape in 2014 and decided that Joe Mixon, with all of his talent, still had a place on his roster. Now that his eligibility has been used up, Stoops is done with him, trying to sound both like he gives a damn about violence against women and like he’s some kind of law-and-order Southern judge. He’s neither: just a rank hypocrite and a user of teenagers. In other words, a typical, big-time, top-tier NCAA football coach.

A question that those who might not be familiar with the geyser cesspool that is college football might ask themselves is how Bob Stoops can live with himself. It’s easy. He makes $5.5 million a year in a state where one in four people under 18 live below the poverty line. He makes $5.5 million a year at a school where adjunct professors make $17 an hour and in a state where first-year public-school teachers make $31,000 a year. He makes $5.5 million a year, while his players make meal money. But Bob Stoops is not here to educate. He’s here to win football games and ensure that football in Norman, Oklahoma, maintains its place as a tent pole of the neoliberal university. The problem is that shaming Stoops or expressing our outrage toward Joe Mixon only allows the scandal train to continue down the track unharmed, ensuring that stories like this happen again in the future with numbing regularity and without video. It’s critical to see this as a feature in a system that deserves a massive overhaul. We have heard stories like this before, and we are doomed to hear them again. If we want this to change, we should shine as bright a light as possible on the hypocrisy of Bob Stoops. The man might not be an educator, but he is at present providing one hell of an education about the craven nature of this business.