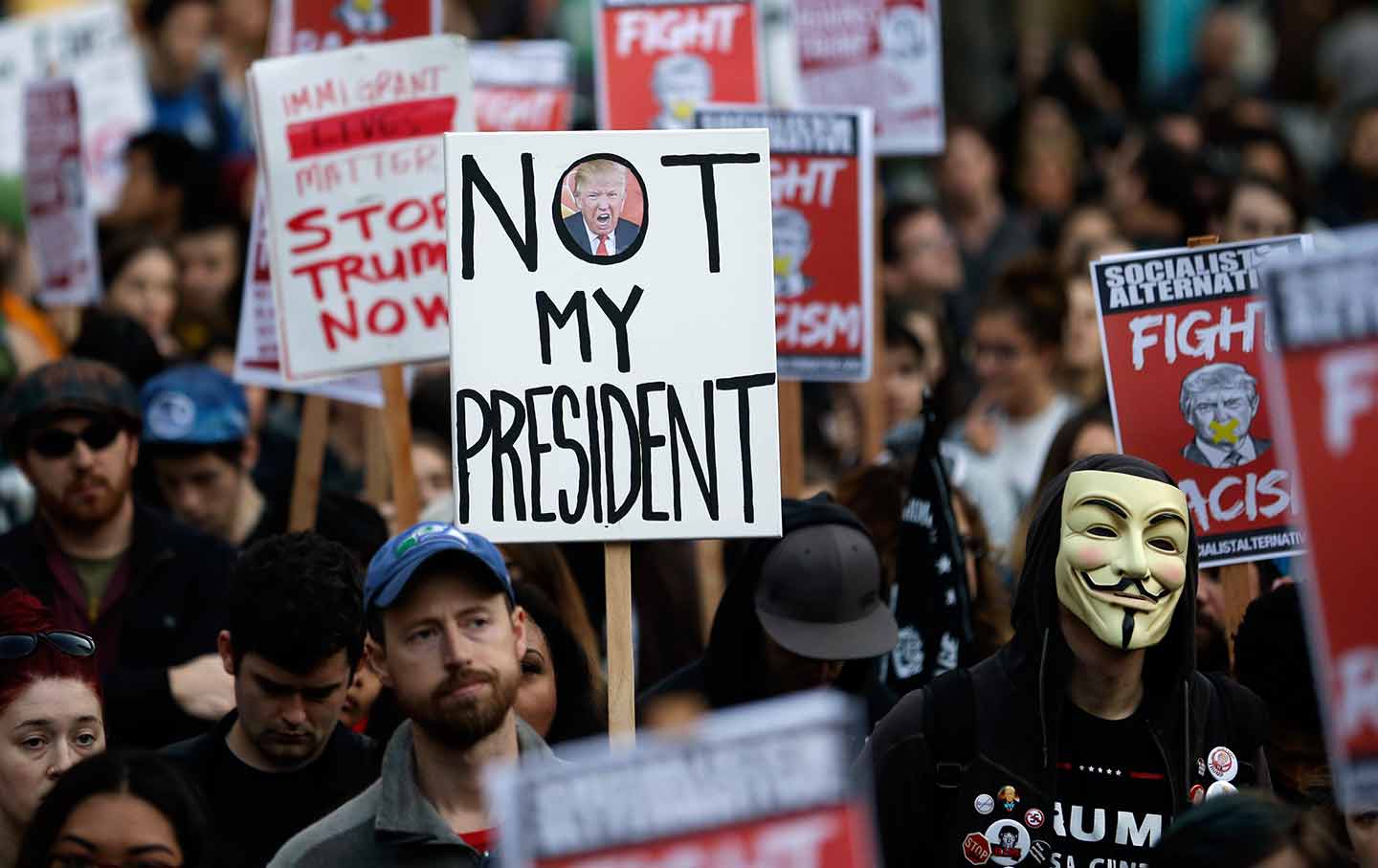 It is safe to say that this election broke the spirit, and maybe even the brains, of a lot of liberal Democrats.

Some frustrated blue-staters have dealt with the devastation by openly embracing the paleoconservative value of states’ rights as a way to resist Trumpism. The “Calexit” campaign, for example, proposes that the country’s largest state should separate from the rest of the union, presumably to create some sort of utopia where you can become a billionaire because of an app or be killed by a speedy death penalty.

Kevin Baker took shrieking secessionism to new heights in a 4,700-word piece for the New Republic called “Bluexit,” in which he sarcastically argued in a letter to a “Red State Trump Voter,” addressed from him, a “Blue State Patriot,” that Clinton states should wash their hands of states that voted for Trump altogether.

It’s typical liberal defeatism: instead of digging into the reasons why some states in America have become so red—systemic voter-suppression tactics and gerrymandering all across the country, the decline of unions, the failure of decades of neoliberal economic policies—and offering solutions for how to fix that problem, Baker instead said that blue states should leave the states who voted for Trump to their own devices.

Baker suggested that blue states pull as much money as they can out of the federal government, getting rid of federal programs like Social Security and Medicare and replacing them with their own state-run versions. He argued for abolishing the federal income tax, and even said we should get rid of FEMA. People in hurricane-hit states like Louisiana and Mississippi would evidently be on their own.

With an influx in this new money from killing essential programs, blue states would redirect funding into their own, better programs. Setting aside the fact that the “states do it better” argument is exactly the same one that libertarians have been making for 50 years with absolutely no evidence to back it up, it’s a highly questionable proposition that even the most liberal states would turn into blue islands of progress. Are we really going to trust Democrats like austerity-hawk Connecticut Governor Dannel Malloy to pick up the slack on public services?

Yes, argues Baker. “We’ll turn Blue America into a world-class incubator for progressive programs and policies, a laboratory for a guaranteed income and a high-speed public rail system and free public universities,” he wrote. Never mind that a solid-red state—Tennessee—was the first in the country to offer free community-college tuition.

Mississippi—home of the Mississippi Freedom Democratic Party—is particularly useful for Baker as an example of a red state that has worn out its usefulness. “You people—your phrase, not mine,” Baker scowled, “liked to bash Obama for turning America into what you derisively referred to as ‘Food Stamp Nation.’ In reality, it’s more like Food Stamp Red America—something your Trump-loving congressmen will discover if and when they fulfill their vow to gut the program.”

There is no sugar-coating problems in Mississippi, and all the organizing in the world may never turn that state blue. But the idea that the left should completely abandon the poor and working class in entire swaths of the country—which, in many places like Mississippi, is largely made up of people of color who have faced systemic discrimination at every level for generations—is pure cruelty.

Whether Baker thinks about the effect that such a break would have on marginalized people in red states, or if he simply doesn’t care, is irrelevant. The fact is that federal money in solid-red states like Mississippi—where 35 percent of African Americans, 31 percent of children, and 22 percent of people overall live in poverty—can often mean the difference between a public service’s being provided or not.

It’s the difference between ensuring civil rights in those places, too. President Barack Obama’s executive order directing public schools to accommodate transgender students is but one example of a policy that, without federal involvement, would have no chance of being enacted in some states.

Instead of “Don’t mourn, organize” as a call for the left to build for a better future in states currently run by conservatives, Baker’s rallying cry is “Don’t mourn. Pack.” Luckily, red-state progressives haven’t taken this advice. In the last election, medical marijuana and the minimum wage—two popular progressive policies—won in places like Arizona, South Dakota, and Arkansas. And as Zach Carter recently wrote at The Huffington Post, a coalition of “animal welfare activists, environmental groups, Native American tribes and family farmers” defeated an agriculture deregulation measure by over 20 points in ruby-red Oklahoma. A year ago, Bobby Jindal’s budget failures in Louisiana gave way to a Democratic governor.

Anyone who says that organizing in the South doesn’t work hasn’t been paying attention to North Carolina. In the years following Republicans taking the state legislature and the governor’s mansion for the first time since the end of the Civil War, the Moral Movement—which started when Democrats were the dominant party in the state—organized resistance and civil disobedience that kept Republican attacks on public services, education, marginalized people, and the working class at large in the limelight.

Along with the backlash to HB2, progressive organizing helped to sink not only Governor Pat McCrory but also attorney general candidate Buck Newton, the state senator who helped shepherd HB2 through the legislature and championed the repeal of North Carolina’s Racial Justice Act. Although gerrymandering helped Republicans retain veto-proof majorities in both houses of the legislature, the message is clear: Just because a state has gotten redder does not mean it’s a lost cause.

That’s certainly and obviously true in Pennsylvania, Wisconsin, and Michigan—formerly reliable Democratic states that voted for Trump. All three are states that voted for a Republican for the first time in decades, and a swing of about 80,000 votes in these three states could topple him in 2020.

The simple fact is that Red America and its people are just as redeemable as their blue-state neighbors. With or without coastal liberals who turn their noses at the hard work of organizing for progressive victories in places outside of the Northeast and the West Coast, it’s a necessary task and moral obligation for the left to win these parts of the country back. The only alternative is permanent right-wing rule—not just for those in red states but for all of us.