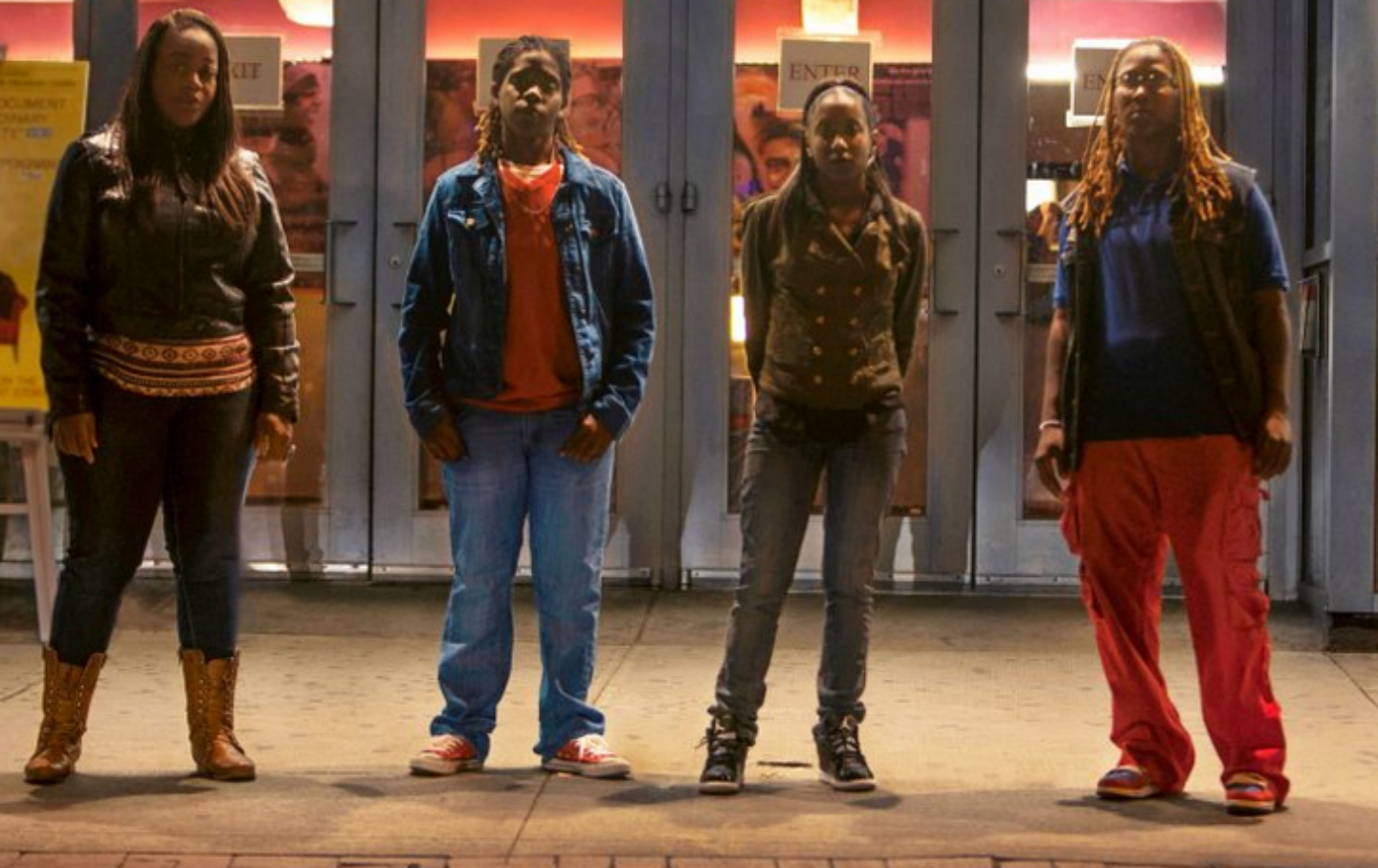 Just before 2 AM on an August morning in 2006, seven gay black women were harassed as they walked down a street in New York City’s West Village. A man seated on a fire hydrant outside a movie theater called them “dyke bitches,” according to one of the women. He told them, “I’ll fuck you straight.” Dissatisfied by their response, he spit at them and threw a cigarette.

What happened next, a confrontation which led to four of the women being convicted on felony charges and spending years in prison, is the subject of Out in the Night, a documentary streaming online until July 23 and which premiered on PBS and Logo TV last week.

In short, the man—who was discovered to have commented online that “women should welcome your advances because that’s how the race should propagate itself” and that “80 percent of serial killers are homosexual”—sustained stab wounds after one of the women pulled a knife in the midst of the melee that followed. The women, who had traveled to the Village from New Jersey that night, suffered among them a bruised eye and busted lip, a fistful of dreadlocks pulled from the scalp, and choke marks on the neck, among other injuries. The women maintain that their harasser swung first, and that his aggression eventually drew the attention and involvement of onlookers.

But in the eyes of many of the corporate media outlets that reported on the incident, the women were the savage and bloodthirsty aggressors. A New York Post headline called the incident “Attack of the Killer Lesbians.” Other headlines read: “The Case of the Lesbian Beatdown,” “Gal’s Growl: Hear me Roar,” and “Girls Gone Wilding.” Even the staid New York Times ran a headline that implied that a benign encounter had gone wrong because some woman couldn’t lighten up: “Man is stabbed in attack after admiring a stranger.”

It wasn’t just the media that treated the women harshly, the film argues: the criminal justice system did as well. They faced felony charges, including gang assault (simply on account of the size of their group), attempted murder, and criminal possession of a weapon. Three of them were, as an attorney interviewed puts it, “coerced by circumstance” and pled guilty. Presumably the risk of doing serious time behind bars was too much. The women who went to trial—Venice Brown, Renata Hill, Patreese Johnson, and Terrain Dandridge—became known as the New Jersey Four.

In the June issue of the The Journal of American History, University of Texas at Austin professor Kali Nicole Gross offers context that helps explain why those dehumanizing headlines made it past New York City’s copy desks and why the courts handled the incident as a gang case. In an essay about the historical experiences of black women and incarceration, she writes of late-19th- and early-20th-century architects of criminology: “Criminal anthropologists assessed female deviance, in part, by subjects’ proximity to, or distance from, Western ideals of femininity, morality, and virtue—standards against which black women failed to measure up. Proponents…masculinized black women, claiming that their physical ‘correspondence with the male is very strong’—an aberration reputedly indicative of congenital criminality.”

But, of course, it wasn’t just their gender and race that brought the hammer of public opinion down hard on the New Jersey Four. It was their sexuality and the challenge that some of the women’s appearance posed to traditional gender norms. In the film, Terrain Dandridge’s mother says she was apprehensive going into the trial, given what her daughter and her friends would represent to the judge and jury: “Of course you being a woman, then being black, and then the nerve of you to be gay.”

The film also explores the question of black people’s—particularly black women’s—right to self-defense. It’s a topic that’s received necessary attention in recent years, particularly as a common thread between the cases of Marissa Alexander, CeCe McDonald, and the one profiled in Out in the Night. In an interview in the film, Patreese Johnson—who wielded the knife and served more than seven years of her 11-year sentence before having it reduced on appeal—says, “Yes, I did pull my knife out and I did because…” She takes a deep breath before continuing, “You couldn’t tell me my best friend wasn’t about to die.”

Again, Gross’s recent essay is helpful, as it points out that long before Alexander, McDonald, and the New Jersey Four, many black women felt that staying safe was squarely their own responsibility. Gross writes: “Exclusionary notions of protection have created a need for black women to trade in extralegal violence for personal security. Historical accounts are replete with examples of otherwise-law-abiding black women found carrying small knives and other weapons to guard against daily assaults and violations at home and in the workplace—behaviors gesturing toward their often-overlooked vulnerability.”

Out in the Night is critical viewing, especially in the wake of May’s #SayHerName protests, and at a moment when groundbreaking reports on prison conditions and visionary policy change are drawing attention to the lives of women in the criminal-justice system. The second half of the film focuses on the women’s experiences in prison and immediately after—the hallucinations while inside that eventually result in a PTSD diagnosis, the twists and turns of the appeals process, the fight to regain custody of a child after years locked away. In telling the stories, the film puts a face on issues that are too often talked about in the abstract.

It helped make another issue less abstract for me as well, one that had been nagging me ever since Friday’s historic Supreme Court ruling that legalized same-sex marriage nationwide. I had mostly skipped over any celebration and gone straight to reading up on the critical fights LGBTQ organizers can focus on in the wake of this victory, particularly efforts to end discrimination in housing and employment. I had been thinking about the rampant street violence and street harassment that LGBTQ people, particularly those who are black and brown, still face daily. I had been nodding along with arguments about marriage being a fundamentally conservative institution, and about how exclusionary and melodramatic the last paragraph of Kennedy’s opinion is. (No union is more profound than marriage? Those who don’t marry are “condemned to live in loneliness”? No.)

But the cynic in me was stopped cold by Renata Hill’s words near the end of this film, after she’s served more than two years in prison and been freed through a retrial, after she’s regained custody of her son and fallen in love with a woman named Marilyn. “We’re building a family together, working on a home,” Hill tells the filmmaker, pride and hopefulness clear in her voice. “And one day, I’m going to ask her to marry me.”