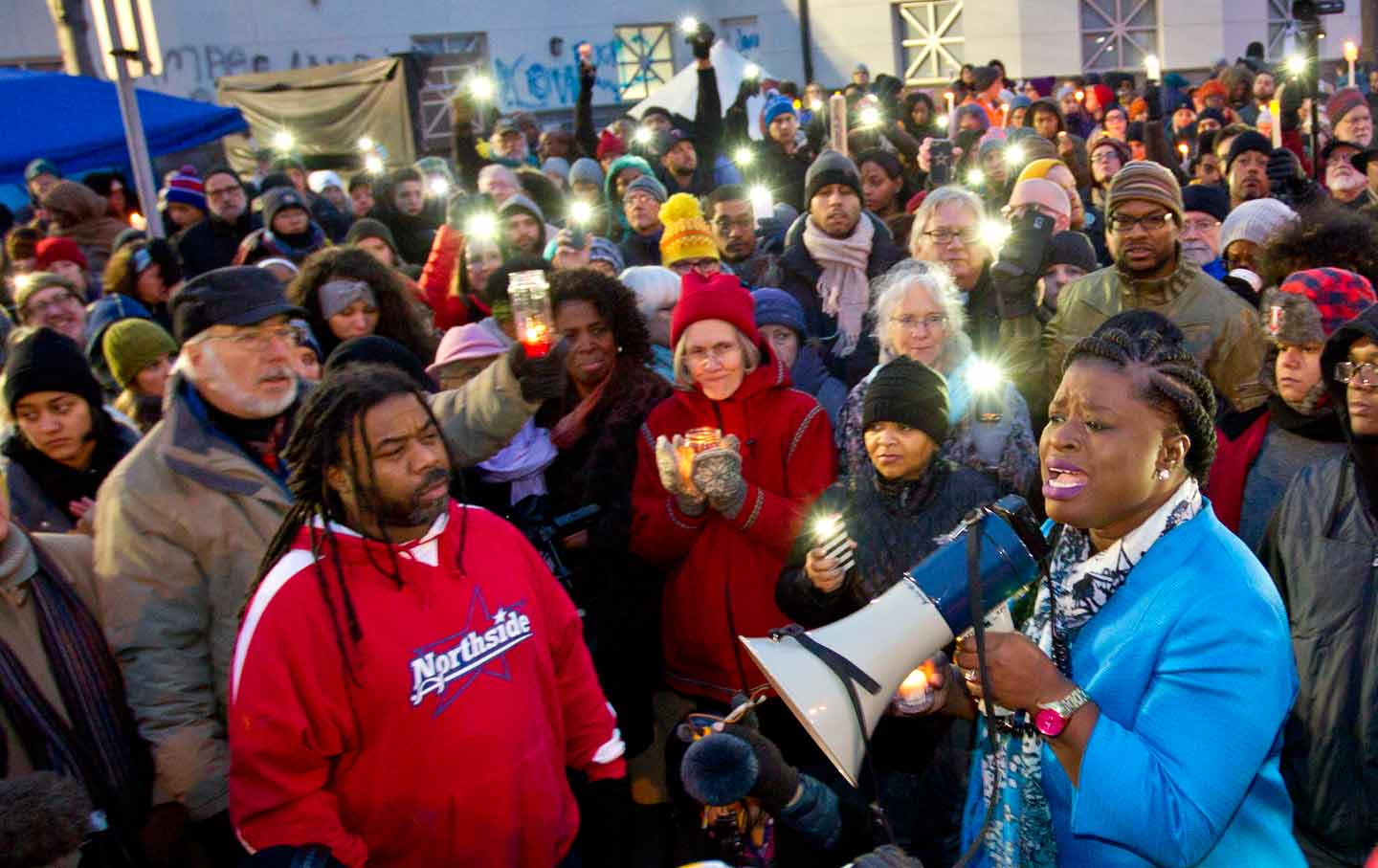 Last night around 10:45 in Minneapolis, a group of suspected white supremacists opened fire on a crowd of Black Lives Matter activists, injuring five people. All five were taken to the hospital and one underwent surgery early this morning. The shooters targeted a Black Lives Matter encampment near the Minneapolis Police Department’s 4th Precinct, where protesters have remained for over a week to demand consequences for the police killing of unarmed 24-year-old Jamar Clark.

The attackers, some of whom were allegedly wearing masks and bullet-proof vests, fled from the encampment, which was a block away from the police station. Many protesters at the encampment claim police officers simply stood around. One Black Lives Matter activist, Toor, 21, came to the encampment after work, having heard about the shooting. “People heard the police saying, ‘This is what you wanted, this is what you asked for.’” According to one eyewitness, it took the police 15 to 20 minutes to respond, evoking the Ferguson police’s decision to let the body of Michael Brown lie outside for hours.

The police did not respond to these specific accusations and issued a statement claiming that officers immediately responded to the shooting.

As of now, little is known about the identity of the attackers. Over the last week, protesters in Minneapolis have been facing regular threats from white supremacists. On Friday night, two masked men decked in camouflage came to the protests and made Black Lives Matter activists feel threatened.

One of the masked men gave the local outlet, City Pages, an ominous statement that night. “I don’t know if this is what [protesters] were planning, just standing here. It’s almost as if they expect one of us to do something. They expect one of us to be in the wreckage of all this. It’s boiling. It’s going to be happening soon.” According to City Pages, the same men released a video of them driving to the precinct, brandishing a gun, and declaring, “We’re going to knock this shit out.… a little reverse-cultural enriching. Let the fire rise.” As of now, it is unclear whether there is any connection between these masked, armed men and those that shot at protesters last night.

These attacks are just the latest of what appears to be a resurgence of organized white supremacy in America, made disturbingly clear by Dylann Roof’s shooting spree on a black church in Charleston, South Carolina, earlier this summer. According to Sam Richards of the North Star Post, the Minneapolis shooters are alleged to have yelled, “Race war and Trump 2016” before there shooting.

Three days ago, a mob of white supporters at a Trump rally attacked a Mercutio Southall Jr., a Black Lives Matter activist, who recalls being called “N*****” and “monkey,” as he was kicked, punched, and shoved to the ground. The assault took place in Birmingham, Alabama, where white supremacists bombed the 16th Street Baptist Church over 52 years ago.

In response to the assault, Trump appeared to endorse the violence, declaring, “Maybe he should have been roughed up, because it was absolutely disgusting what he was doing. I have a lot of fans, and they were not happy about it. And this was a very obnoxious guy who was a trouble-maker who was looking to make trouble.” Trump added to the controversy on Sunday, tweeting out false, racist statistics about murder rates that turned out to be have been posted by a neo-Nazi.

According to Black Lives Matter activists in Minneapolis, as in the civil-rights movement, there is little distinction to be made between this rising vigilante white-supremacist movement and the police.

In a 2007 federal employer discrimination suit, for example, several minority police officers accused the department of systematic discrimination. In the suit, Robert Kroll, now the head of the Police Officers Federation of Minneapolis, is accused of regularly wearing a “motorcycle jacket with a “White Power” badge sewn into it.”

“None of these groups are new,” says Yohanan Blackkwell, an organizer, who was present for the beginning of the precinct occupation. The KKK has been around and police were the original slave catchers. We’re going to deal with it the same way we always do, singing the gospel and holding up the mirror to these terrorists. The plantation here in Minneapolis is going to be torn down.”