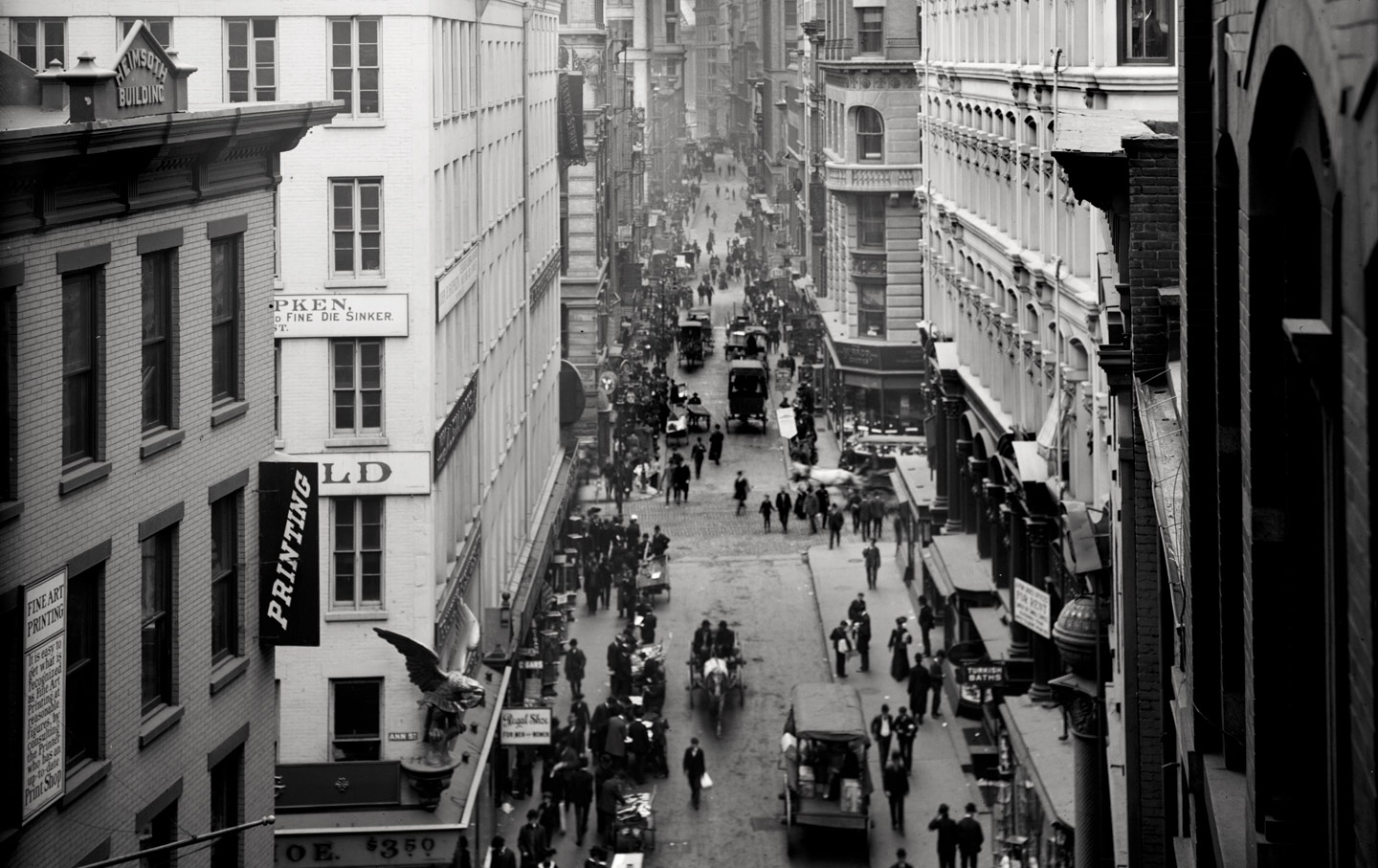 The Nation’s first office was on Nassau Street. It spent nearly a century in that neighborhood, mostly in the majestic Evening Post building on nearby Newspaper Row.

On June 25, 1863, as Confederate forces fought their way north toward Gettysburg, a group of wealthy New Yorkers gathered at the Union League Club on 17th Street to hear a pitch. The speaker, journalist and landscape architect Frederick Law Olmsted, laid out a “dream of an honest weekly paper.” The idea was to aim not for a large circulation, but for a select, influential readership. By the end of the evening, Olmsted had his first thousand dollars. By the end of the week, he had trustees, a fundraising committee and an editor: his friend E.L. Godkin, an Anglo-Irish journalist who had covered the Crimean War and toured the American South (inspired by Olmsted’s own writings). “The thing starts so favorably,” Olmsted wrote to his wife, “I shall go into it strong, meaning to succeed.”

But Olmsted was impulsive, and when an offer came that August to manage an enormous gold mine in California, he turned “The Paper,” as they still called it, over to Godkin, along with a letter of introduction to Charles Eliot Norton, editor of The North American Review. Godkin met with Norton and received encouragement, but not investment, so he gave up.

In April 1865, Godkin wrote to Olmsted to congratulate him on “the great events of the last fortnight.” Lee’s surrender at Appomattox had left him “dumfoundered,” and though he was thrilled by the Union victory, “I confess I should be very anxious about the terms of reconstruction, if Lincoln were not to be president for the next four years.” The letter was dated April 12, and long before it reached California, Lincoln was dead. Yet even as the nation was binding up its wounds and mourning the slain emancipator, the prospect of victory was tearing the abolitionist movement apart.

The question was whether the Thirteenth Amendment, in decreeing the end of slavery, also meant the abolitionists’ work was done. William Lloyd Garrison, editor of The Liberator, thought it was. Declaring “my vocation as an Abolitionist, thank God, is ended,” and wishing to devote himself to women’s suffrage and other causes, Garrison proposed that the American Anti-Slavery Society, which he had founded, should be dissolved. But Wendell Phillips, who had joined the movement after rescuing Garrison from a Boston lynch mob thirty years earlier, disagreed, and a bitter power struggle ensued.

It was in the midst of this battle for the future, and legacy, of the abolitionist movement that James Miller McKim, a Philadelphia activist with friends in both camps, determined to start a national weekly to continue the work of The Liberator “on a broader ground.” McKim soon had his funding, as well as a name for the new magazine: The Nation. Now he needed a staff. Norton, of course, knew about Godkin’s interest in starting his own weekly, and after getting him to recant his skepticism about black male suffrage—his suggestion that freedmen should have to earn a living for ten years before voting was hardly a position that would appeal to The Nation’s backers—Norton recommended Godkin to his friend McKim.

“No. 1 is afloat,” Godkin wrote to Norton on July 5, 1865, “and the tranquility which still reigns in this city, under the circumstances, I confess amazes me.”

“The political complexion of The Nation is not at all doubtful,” sniffed The New York Times in a review of the first issue. Radical on all questions regarding the freed slaves, the magazine viewed the Civil War’s end as a triumph not just for the Union, but for “democratic principles everywhere.” Nor did The Nation have a great deal of sympathy for the defeated slaveholders. “However much opposed we may be to political vengeance,” the editors wrote, “there is nobody who will deny that men who have made themselves conspicuous in instigating an appeal from the ballot to the sword ought to be compelled, after defeat in the field, to hold their tongues for the remainder of their days.”

But The Nation’s darts weren’t always so well aimed. When Wendell Phillips took exception to the magazine’s treatment of Radical Republican Senator Charles Sumner, an editorial dismissed the great abolitionist as one who, “from a great height in the air, [behaves] as a kind of vulture to scare the more mindless, cowardly, and laggard Radicals into a show of eagerness and activity.” The Nation’s young literary editor, Wendell Phillips Garrison—William Lloyd Garrison’s son and James Miller McKim’s son-in-law—joined the attack, sneering at the man whose name he bore.

Godkin’s evident contempt for Phillips, and his only partly concealed wobbling on the question of black suffrage—ideally, he suggested in the second issue, the government should “exclude everybody from the polls who can neither read nor write”—upset the magazine’s Radical backers. Godkin told a friend in 1866 that he was “afraid to visit Boston this winter, lest the stockholders of The Nation should lynch me.”

Despite losing many of its initial backers, The Nation remained for some time a radical organ. Whether the topic was female suffrage—a movement that Godkin wished “all possible success,” arguing both that women deserved the vote “if they desire it,” and that “we think they ought to desire it”—or the possibility of using solar energy as a replacement for coal, The Nation did not shy away from radical solutions.

Yet the magazine, along with the rest of the country, gradually wearied of Reconstruction, and its abandonment of the freed slaves makes for painful reading today. Beyond excuse, beyond extenuation, it also defies simple explanation. What can be said is that from 1870 onward, Godkin and The Nation became increasingly the voice not merely of the Eastern establishment, but of the most reactionary elements within that establishment. Bound by his “liberal” principles to oppose any attempt to interfere with the “freedom of contract,” Godkin had always resisted calls for an eight-hour workday and worried that a government able to prohibit children from working in factories—a goal, he allowed, for which “there is a great deal to be said”—might end by telling “us what to eat, drink, avoid, hope, fear, and believe.” When the first great railroad strikes convulsed the United States in July 1877, Godkin was appalled: no government, he wrote, could tolerate conditions in which a few thousand “day-laborers of the lowest class can suspend, even for a whole day, the traffic and industry of a great nation, merely as a means of extorting ten or twenty cents a day more in wages.” Blaming foreign agitators, Godkin called for a show of force: “The kindest thing which can be done for the great multitudes of untaught men who have been received on these shores…is to show them promptly that society as here organized, on individual freedom of thought and action, is impregnable, and can be no more shaken than the order of nature.”

The Liberal Republican revolt, begun in 1872 as an abortive attempt to deny Ulysses Grant a second term, brought Godkin into closer contact with Henry Villard, a German immigrant who had covered the Civil War for the New-York Daily Tribune and married the sister of Wendell Phillips Garrison. Returning briefly to Germany for health reasons, Villard was asked by a group of German investors to manage their holdings in American railroads, eventually taking control of the Northern Pacific. With Godkin as one of his front men, Villard bought the New-York Evening Post as a vehicle for his interests. But Godkin came at a price: in addition to being named one of the editors, Godkin demanded that Villard also buy The Nation, leaving the new owner’s brother-in-law (and Godkin’s longtime underling), W.P. Garrison, in nominal charge.

In the 1890s, The Nation picked a fight with the whole country—indeed, with the whole trend of contemporary American foreign policy. The roots of the magazine’s opposition to America becoming a global empire are as tangled as the history of American anti-imperialism. Though many of those who opposed America’s wars did so for the reasons cited by Henry David Thoreau in “Civil Disobedience,” there had also always been a less high-minded reluctance to get entangled in the affairs of darker, non-European peoples—especially if they might then become American citizens. Nothing but trouble, The Nation warned in 1898, would come from “dependencies inhabited by ignorant and inferior races” with whom Americans had no business other than “carpet-baggery.”

When the cruiser Maine sank in Havana Harbor in February 1898, The Nation was ready. “The need of opposing and exposing the diabolical newspapers which are trying to lie the country into war must be obvious,” the magazine declared. Of all the causes in The Nation’s history, anti-imperialism is the one on which the magazine has never wavered.

Since his father’s death in 1900, Oswald Garrison Villard had served a long apprenticeship, only becoming president of the Nation Company—effectively the magazine’s publisher—in 1908. Slowly, however, he began to make his influence felt. In 1909, Villard was part of a small group of black and white Americans, including his friend W.E.B. Du Bois and the journalist Ida Wells, who founded the National Association for the Advancement of Colored People. In 1912, Villard also maneuvered The Nation into endorsing Woodrow Wilson after being impressed by the Princeton president’s efforts to abolish the elitist “eating clubs” from campus. A chance meeting on a cruise from Bermuda had cemented the friendship between the two men.

But they fell out over American entry to the World War, as Villard kept pressing for the “peace without victory” that Wilson himself had once promised the country. Though Villard, and The Nation, lauded Wilson’s Fourteen Points in January 1918, he also praised “those amazing men, Lenin and Trotsky,” whose revolutionary victory brought Russia out of the war. Villard’s refusal to join Wilson’s crusade set him apart from every other editor in New York—including many of his own employees. Deciding to concentrate his efforts and lift some of the financial burden, he finally took over The Nation himself and sold the Post. Radicalized by the war, Villard, and The Nation, was now free.