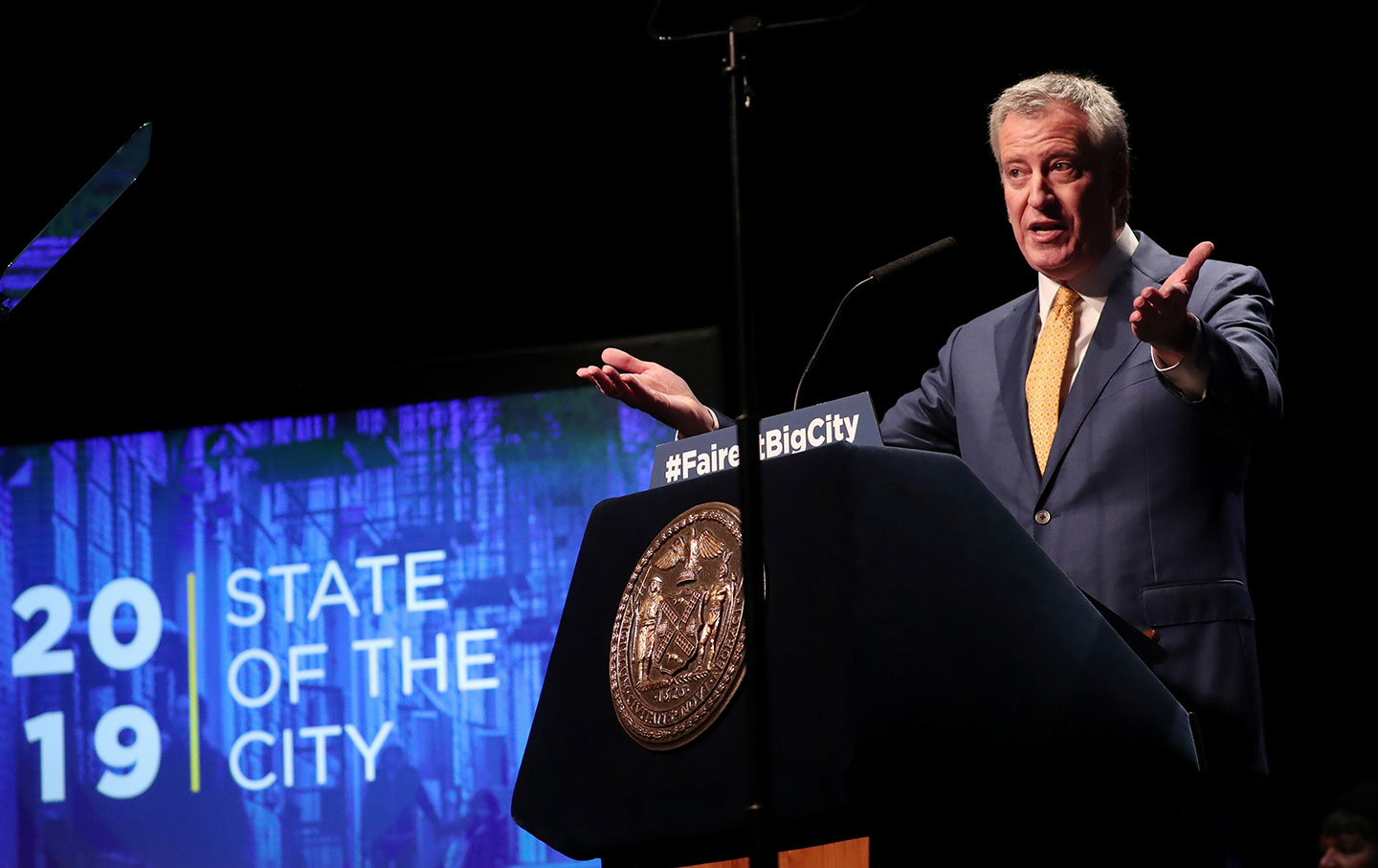 Bill de Blasio has earned much of the derision that greeted his announcement on Thursday that he is running for president. He promised transformative change when running for mayor but sometimes has been too cautious to deliver. He’s strayed dangerously close to ethical red lines in mixing fundraising and governing. He leapt too early onto the national stage in 2014 and quickly tumbled into the orchestra pit. Again and again, he left the house too late and rode a car that was too big to a gym that was too far from his office. He’s frequently been tetchy with the local press corps. Perhaps worst of all, he often ratified the right wing’s cartoon of him as aloof and ineffectual.

And yet he runs—even though polls say New Yorkers would prefer he did not, even though among the Democratic field of 23 (and counting?) there are bigger names with more cash, less baggage, and paths to the presidency that don’t require debunking the canard that our city is a crime-ridden, trash-strewn communist nightmare. He goes where past New York mayors have failed, even though he promised not to and even though he is on the payroll to run a city of 8 million for 31 months more.

Let’s not bother to wonder why he’s really running—to win or just to line up a cabinet post by showing off his chops?—or waste time nodding along with the pundits who assure us he has no chance to win. Other than Joe Biden, Elizabeth Warren, Bernie Sanders, and Kamala Harris, who in this massive field gets odds better than 50 to 1? Will even 15 of these candidates still be in the race come Halloween? Will 10 be there in New Hampshire? De Blasio’s microscopic chances are only as puny as what most of the primary field faces.

The thing to ask today is: What good can come of this? Nowadays our years-long presidential process gathers together hundreds of millions of dollars, world-shaping policy proposals, and a dozen or so reputations, throws them in a pit in the backyard, splashes on some butane and tosses in a match. Whumph! We watch the smoke from our decks and wonder: Is someone cooking something in those flames? Or at least warming their hands near the fire?

Can de Blasio running for president—likely futilely—create anything other than soot and a smoky odor?

When the derisive laughter fades, the fact is that de Blasio has a case to make. While he has fallen short on many counts, he has still delivered a lot of concrete, progressive change, improving tens of thousands of lives in the process, all while managing a $90 billion budget and a 300,000-person bureaucracy. He’s dealt with crises, from a terrorist attack to severe weather to cop killings to an Ebola outbreak. De Blasio can make the case that, except for former vice president Biden, his work experience is better aligned with the presidency than any senator, representative or small-city mayor currently in the race and maybe even more than the governors. And perhaps that will make people pay attention to the idea de Blasio represents: that, as disappointing as it can be, a center-left government can produce broad-based benefits for working people.

His slogan, “There’s plenty of money in this country—it’s just in the wrong hands,” will piss a lot of people off—maybe the right people. It’s vague, emotive and a little dangerous, like all good slogans. But if it can focus any part of the Democratic debate on the distribution of resources (income, wealth and land) so that the party avoids the trap of making 2020 primarily about wedge issues like impeachment and guns, that would be to everyone’s benefit.

Is de Blasio trying to be a more progressive presidential candidate than he was a mayor? Maybe. National campaigns are all about broad strokes. The nuances of his housing policy, which included a historic mandate that developers set aside income-targeted units but also directed subsidies to higher-income groups with less severe housing needs, are unlikely to be nibbled over in Iowa school gymnasiums or church halls in South Carolina. De Blasio’s reducing arrests while continuing to embrace “broken windows” policing frustrated the left locally, but that won’t translate to a bigger stage. It’s the big and juicy ideas that get play in a presidential race, and he has had some good ones, like universal health care, living wages, and early childhood education.

Bill de Blasio Has 4 Years to Cement His Progressive Legacy

Along with big ideas, de Blasio carries big baggage. The negative commercials all but write themselves: reports of prosecutors who narrowly decided not to prosecute him for campaign finance violations, images of former donors and fundraisers heading to prison, shots of the city’s persistent homeless population, and samplings from the lead-paint scandal at the New York City Housing Authority. Here, the nuances would help him—he did devote a lot of money to fixing NYCHA, just not enough—but those won’t make it into the script. All of that is assuming he is in the race long enough for there to be a negative ad about him.

I didn’t want de Blasio to run for president, for one reason only: I didn’t want the management of the city where I work and live to be overtaken by the 24/7 nonsense of a presidential campaign. I didn’t want every move he makes, every word he says, to be interpreted through the lens of his national candidacy—and frankly, I didn’t want him making decisions thinking about primary voters in New Hampshire instead of me and my neighbors in the Bronx. Being mayor of New York City is a pretty great job, with tremendous potential to do good for millions of people, and I worry that de Blasio is mortgaging some of that on a long-shot run for the White House.

Now that he is running, though, maybe we can hope the national stage brings out some better version of Bill de Blasio: more transparent, more willing to try to connect with different constituencies, more cautious about the dangers of courting donors, bolder. I have no idea if that version of him would be a good president. But I know it would make for an even better mayor.