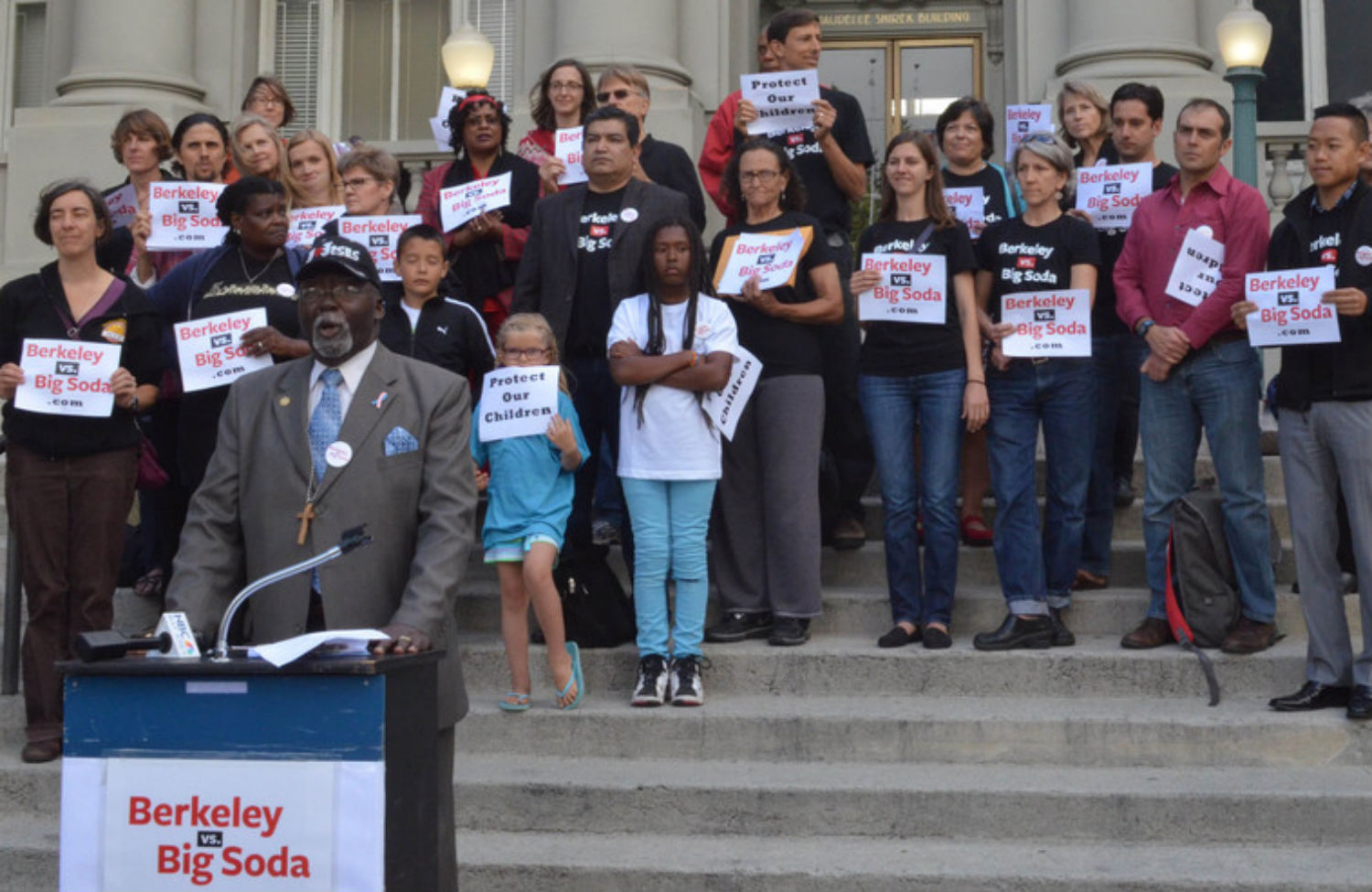 Supporters of Measure D rally on the steps of Berkeley City Hall. (Photo courtesy of Berkeley vs. Big Soda)

Drive around the streets of Berkeley, California and you’ll see “Yes on Measure D” signs everywhere. This morning, on the one-mile drive to my daughter’s elementary school, she and I counted ten. Measure D, also known as the soda tax, would seem a shoo-in for this city of 117,000, birthplace of Alice Waters’s locavore food movement and filled with kale-growing, health-conscious families.

The proposal is both simple and modest: Tax the distributors of sugary drinks at one penny per fluid ounce. Revenue from the tax, estimated to be $1.5 million a year, will go into the city’s general fund and a panel of community and child nutrition experts will recommend ways the City Council can direct the funds to children’s health initiatives. In early polling by the city, 66 percent of respondents were for the measure.

If it were just a matter of popular support, I’d put good money on Measure D in November—making Berkeley the first city in the United States to pass a tax on soda. But the beverage industry has their sights on this small Left-coast town. The companies recognize that the stakes are high because a win here would likely inspire more cities to propose taxes on sugary drink consumption.

So Big Soda is spending big here in Berkeley and across the Bay in San Francisco where a tax is on the ballot, too. On October 6th, the American Beverage Association—the trade group for the non-alcoholic beverage industry working for brands like Coca-Cola, Pepsi Cola, Dr. Pepper, and Gatorade—announced it was putting another $600,000 into its “No on D” campaign. Add that to the money the trade groups have already spent and the total spent fighting the tax is $1.4 million so far.

This money has paid for the so-called “Californians for Food & Beverage Choice,” an AstroTurf organization fully funded by the American Beverage Association, and for mailers and calls to Berkeley residents. It’s paid for radio and online ads on local media outlets, and for young men to pass out literature at public transit stations while others walk precincts, saying anything they think will stick, accurate or not. A friend texted me, a few nights ago, that a man was going door-to-door in our neighborhood handing out literature against Measure D. He said he was working for a City Council member opposed to the tax, but when she asked which one, he couldn’t come up with a name. That didn’t surprise either of us. The City Council is unanimously in support of the measure.

Big Soda is hoping that it can pour enough money into Berkeley to defeat the tax, like it has every time a city has tried to pass a similar measure in the United States. Two years ago, in nearby Richmond, California, the industry spent $2.5 million in a misinformation campaign and won by 34 percentage points. In 2010, when Philadelphia tried to pass a similar tax, Big Soda made timely contributions to the City Council, totaling $95,000, and the next year made good on a $10 million dollar pledge to the Children’s Hospital of Philadelphia. The tax never passed.

Big Soda certainly has the money. In 2012, the most recent year records were available, the American Beverage Association had revenue surpassing $73 million. That year, the President and CEO, Susan Neely, brought home more than $1 million in total compensation and spent $43.8 million to pay for the group’s five biggest lobbying and public relations firms, with one receiving $27 million.

The American Beverage Association claims taxes like these are regressive—that they lead to higher prices, hitting the poorest hardest. One industry tweet said: “FACT: A soda tax doesn’t DECREASE obesity. It INCREASES our grocery bills.”

But it’s notable that Big Soda seems to care about poor people only when a soda tax hits the ballot. The rest of the time, the industry disproportionately targets low-income communities with marketing for its sugary drinks. According to a recent Yale University Rudd Center study, Black and Hispanic children and teenagers see more ads for sugary beverages than their white peers, helping foster greater consumption and health disparities.

Of course, sugary drinks are not solely to blame, but they are a key culprit. Sugary drinks, especially soda and now energy drinks, are the single largest source of added sugars in the diets of children and teens in the United States. And decades of study have shown that consuming sugary drinks increases the risk of obesity, diabetes, and heart disease. Obesity and diabetes is regressive; these conditions hit the poor hardest.

The other spin tactic industry uses in fights against taxes like these is to pick apart the policy itself, claiming that there are flaws in how the policy is written, with arguments designed to appeal to health-conscious families. The American Beverage Association mailer that my family received recently didn’t defend soda; in fact it didn’t even mention sugary drinks. It complained about what it called “too many” exemptions in the policy, echoing its tagline: “Too many exceptions. Too many loopholes. No on D.” In the mailer I got today, a “concerned mom” in Berkeley said she “thought it might be a good idea” but it has “so many exemptions that many high calorie drinks like chocolate milk aren’t taxed.”

But the coalition that drafted the legislation had reasons for creating these exemptions. For example, pre-bottled milk drinks like chocolate milk, with sugar but where milk is the first ingredient, are exempted in concert with school nutrition guidelines that emphasize the importance of milk consumption for calcium and protein.

Another spin tactic from the beverage trade group is to claim that the policy is flawed because it won’t achieve its stated goal. Americans for Food & Beverage Choice’s website claims “Numerous studies indicate that so-called ‘sin taxes’ won’t reduce obesity by any measurable amount. In fact, research shows just the opposite.” The truth is until we pass the tax, we can only guess at its impact. But we know this: education does work to reduce soda consumption while promoting healthy eating, and we know that the panel entrusted with directing revenue from the tax is committed to funding just such education. Don’t think that the tax will decrease soda consumption? Let us pass it and then we’ll see.

As the soda wars rage on here in Berkeley, I pass by more “Yes on Measure D” houses signs every day. My daughter noticed this morning that we haven’t seen a single “No on Measure D” yard sign yet. That’s not so surprising: Measure D is not only unanimously endorsed by the entire Berkeley City Council, but also the entire school board, the NAACP, the League of Women Voters, local public health officials, academics, businessmen and women, and many more. While the “No Berkeley Beverage Tax” campaign says it’s a “coalition of citizens, businesses, and community organizations,” it’s really just the spin machine of the American Beverage Association.

To date, the industry reports investing $1.4 million into the fight in Berkeley, which is the equivalent to about $18 per registered voter. On the other side, the Yes on D group, Berkeley vs. Big Soda, has raised $135,600 so far.

Fifty years ago, Berkeley was famously ground zero for the Free Speech movement. The irony is not lost on me that today, when the Supreme Court defines corporate ad spending as “free speech,” the well-funded spin machine of Big Soda is trying to drown out the voice of the people.