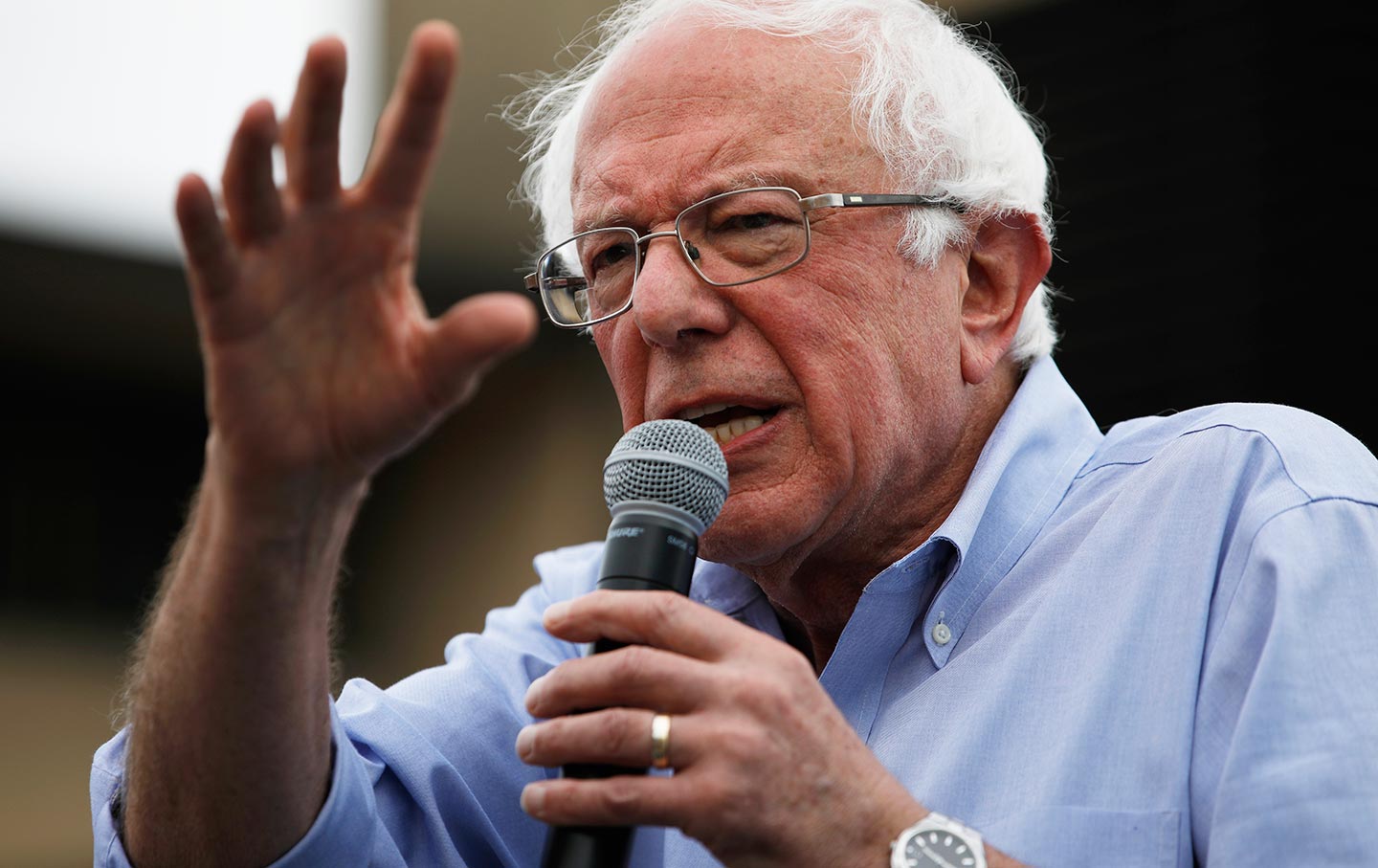 Bernie Sanders picked up the first national union endorsement for his 2020 Democratic presidential bid Monday, when the United Electrical, Radio, and Machine Workers of America announced its support for the Vermont senator. Speaking for a union with a long history of independent activism on behalf of economic, social, and racial justice, UE General President Peter Knowlton declared: “Bernie understands the need for workers to have a democratic, independent union movement that is unafraid to challenge corporate America’s stranglehold on our economy. From four decades of actively supporting UE members and other workers in Vermont, to his vocal support for our 1700 members in Erie, PA who went on a nine-day strike this past winter, Bernie Sanders has always made it clear which side he is on.”

At UE’s 76th national convention in Pittsburgh, Sanders embraced the language of the proudly militant union. “I see my job as president of the United States to stand with the working class of this country, and to end the 45-year-old corporate war against working people in this country,” he told delegates representing the 35,000 members of the union, which carries a significant presence in Pennsylvania and other battleground states. “If there is going to be class struggle in the United States, it’s time that the working class got on the offensive and wins that struggle.”

The UE endorsement was announced after a week in which Sanders and other contenders for the Democratic nomination sought to outdo one another when it came to taking the side of organized labor. The new tone represents a substantial shift in the tenor of Democratic politics from the days when the so-called “New Democrats” of the 1990s and 2000s sought to distance the party from the ardent pro-union politics tracing back to when President Franklin Delano Roosevelt aligned with organized labor and the working class.

Last week, Service Employees International Union President Mary Kay Henry called for a renewal of the old alignment with savvy adjustments to address the realities of the new economy. Specifically, she argued that the National Labor Relations Act “should be a floor, not a ceiling, so that cities and states can innovate.” With her “Unions For All” address on the future of union organizing and collective bargaining, Henry sent a clear signal about the need for Democrats to be dramatically bolder in their advocacy for worker rights. “Many of the 2020 presidential candidates talk about banning right to work laws, or tweaking the rules to make it a little bit easier for workers to join unions,” she said. “But to truly improve the lives of working people, we need all of them to think even bigger.”

In addition to demanding that Congress overturn the most virulently anti-union provisions of the 1947 Taft-Hartley law, which Republicans and segregationist Democrats adopted to thwart labor organizing in the post–World War II era, the SEIU leader called for sweeping labor law reforms that include provisions for industry-wide bargaining. What Henry’s talking about is sectoral bargaining, where unions are able to negotiate rules and standards across entire industries—as happens in many European countries. That would be a major break from the current US model, in which unions generally bargain with individual corporations.

Even before Henry made her call, several candidates had addressed the need for reforms that recognize the challenge of organizing in a “gig economy.” South Bend, Indiana, Mayor Pete Buttigieg framed the issues well in a late July plan from his campaign that noted, “Business models are changing bargaining power. For example, McDonald’s expanded across America while keeping wages low by refusing to bargain with workers who technically work for small local McDonald’s franchises. More than half of workers in Google’s offices do not share in Google’s success because they are domestically outsourced temps and contractors, while millions of Uber and Lyft drivers lack basic protections because they’re misclassified as independent contractors. Meanwhile, so-called ‘right-to-work laws’ in many states have further undermined unions and workers. All of these changes have shifted bargaining power, bit by bit, from workers to their employers.”

“To make the 21st-century economy work for every worker, all of our nation’s workers should have the bargaining power they need to demand good jobs, fair pay, and safe workplaces,” explains Buttigueg’s “New Rising Tide” plan, which includes provisions to guarantee gig-economy workers labor rights, including unionization, and to “enshrine the right to multi-employer bargaining.”

Former Texas representative Beto O’Rourke is out with an innovative “21st Century Labor Contract,” which includes a proposal to “appoint members of the National Labor Relations Board who support a strong ‘joint employer standard’ so that corporations can’t use outsourcing and franchising to avoid bargaining with them and would seek to codify that change into law.” Under O’Rourke’s plan, “Unionized workers would be able to bargain with firms that are not their direct employers but have power over their working conditions.” And, as part of her call for measures that “modernize our labor laws for the 21st century,” Massachusetts Senator Elizabeth Warren has said she wants “fully portable benefits for everyone and [to] make sure that all work—full-time, part-time, gig—carries basic, pro-rata benefits.”

Last week, Sanders unveiled a sweeping “Workplace Democracy Plan,” which he calls “the strongest pro-union platform in the history of American politics.” The senator’s proposal lays out an agenda that is designed to dramatically increase worker representation in the overall economy. “When Bernie is president he will work with the trade union movement to establish a sectoral collective bargaining system that will work to set wages, benefits and hours across entire industries, not just employer-by-employer,” declares the Sanders campaign. The goal, says Sanders, is to double union membership in just four years.