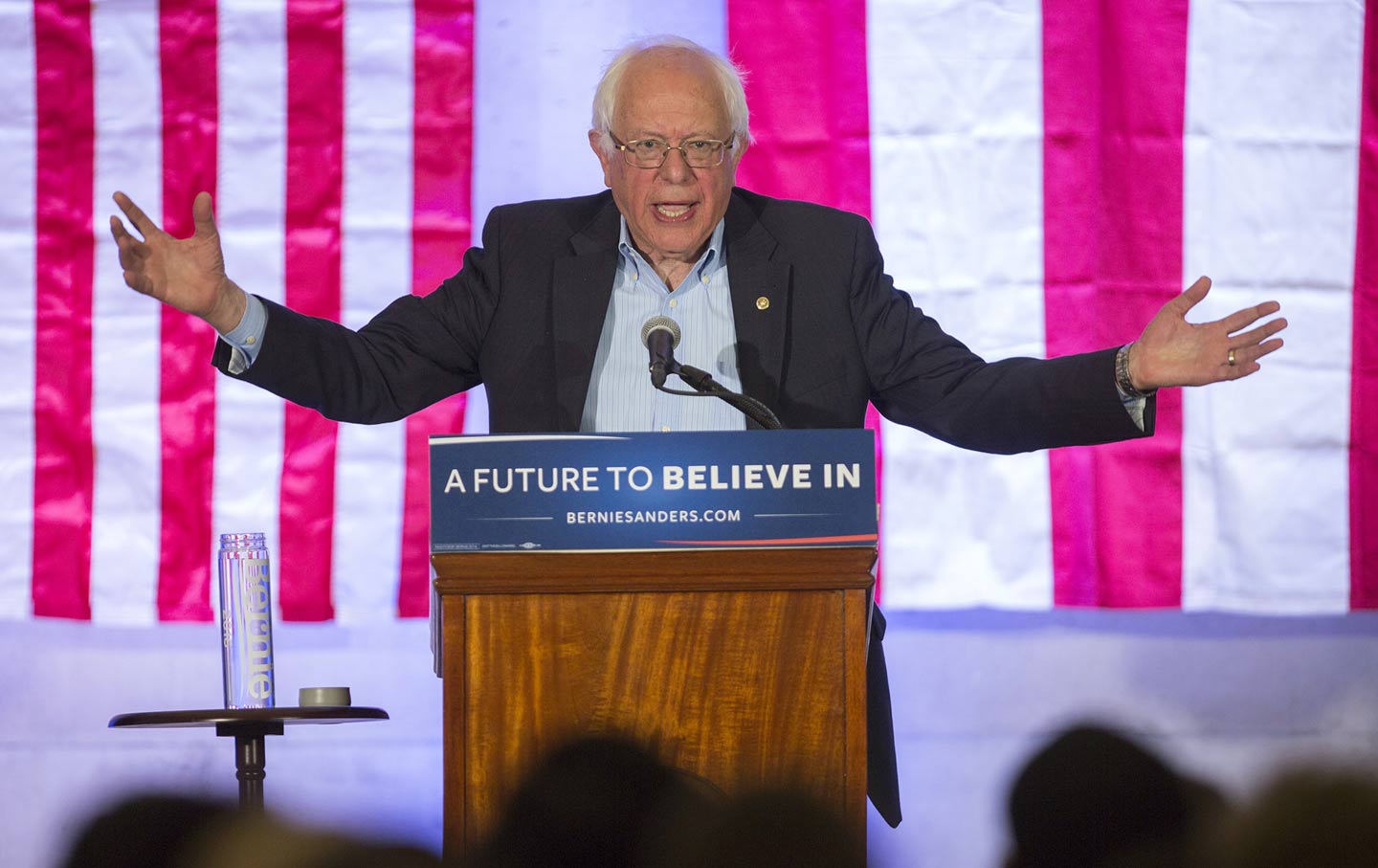 Ripping into the “vulture capitalists” and political elites who favor debt-restructuring schemes that penalize Puerto Rico’s poor and working-class families, Bernie Sanders brought his populist presidential bid to San Juan Monday. And as he has throughout his run for the 2016 Democratic nomination, Sanders argued that democratic options must be expanded in order to let voters prioritize human needs over Wall Street greed.

“It is unacceptable to me for the United States government to treat Puerto Rico like a colony during a time when its people are facing the worst fiscal and economic crisis in its history. In my view, the people of Puerto Rico must be empowered to determine their own destiny,” declared the senator from Vermont, in remarks that focused on a debt crisis that has ravaged the commonwealth, and on the failure of officials in Washington to respond in a humane and economically responsible manner to that crisis.

Sanders told cheering crowds in San Juan that the crisis—and the poverty and economic inequality that has extended from it—”has everything to do with the greed…of Wall Street vulture funds.”

“In the midst of this massive human crisis, it is morally unacceptable that billionaire hedge-fund managers have been calling for even more austerity in Puerto Rico. Austerity will not solve this crisis,” declared the senator from Vermont, who began his campaign swing by addressing a boisterous town-hall meeting on the island that has been overwhelmed by demands from hedge funds for repayment of their piece of a $70 billion debt burden incurred during a period of severe economic decline. “As we all know from throughout the world, austerity will cause more suffering for working people and make the rich richer. We must vigorously oppose all efforts at austerity. It is unacceptable to me that vulture funds on Wall Street are demanding that Puerto Rico fire teachers, close schools, cut pensions and abolish the minimum wage so that they can reap huge profits off the suffering and the misery of the children and the people of Puerto Rico. We cannot allow that to happen. We will not allow that to happen.”

Puerto Ricans cannot vote in November presidential elections, but they send delegates to the Democratic and Republican national conventions—and Sanders campaigned in San Juan in anticipation of the commonwealth’s June 5 primary.

“Austerity will not solve this crisis.” — Bernie Sanders on Puerto Rico’s debt mess

Both Sanders and his rival for the Democratic nomination, former secretary of state Hillary Clinton, have called for Congress to take steps to ease Puerto Rico’s debt burden, with Clinton arguing that “Congress and the Obama Administration need to partner with Puerto Rico by providing real support and tools so that Puerto Rico can do the hard work it will take to get on a path toward stability and prosperity.”

But Sanders—who campaigned in San Juan with a key supporter, former governor Aníbal Acevedo Vilá—turned up the volume Monday with an impassioned critique of austerity schemes and with a call for US officials to stop treating Puerto Rico like a colony.

Blasting “the vulture capitalists on Wall Street are trying to get a hundred percent back on their bonds at a time when so many of the children and the people of this island are suffering,” Sanders delivered a blistering speech in which he demanded a humanitarian response to Puerto Rico’s economic woes.

“The people of the US cannot continue a colonial-type relationship with the people of Puerto Rico.” — Bernie Sanders

At the heart of the senator’s appeal was a message he has been emphasizing for a number of months: “When people are suffering and hurting, you don’t continue to squeeze them. We cannot allow Puerto Rico’s budget to be balanced on the backs of the most vulnerable people—working families, veterans, the elderly, children and the poor. It is not only morally wrong, it is also economically unsustainable.”

Sanders called for an independent audit of Puerto Rico’s debt to insure that citizens are not saddled with debts incurred by irresponsible speculators and politicians who did not follow the rules. “If any debt was issued to creditors in violation of Puerto Rico’s Constitution,” Sanders has said, “it must be immediately set aside.”

The senator decried congressional schemes to create an unelected “oversight board” that could impose austerity cuts on the already-battered public education and public service systems of Puerto Rico.

Sanders called for the Federal Reserve to use its emergency authority under the Federal Reserve Act to “pave the way for an orderly restructuring” of the commonwealth’s debt burden. And he renewed his call on Congress to provide Puerto Rico with the tools it needs to address the debt crisis, declaring that “Congress should act immediately to give Puerto Rico the same authority granted to every municipality in this country to restructure its debt under the supervision of a bankruptcy court.”

“I believe that Congress should act immediately to give Puerto Rico the same authority granted to every municipality in this country to restructure its debt under the supervision of a bankruptcy court,” the senator told a cheering crowd at the gathering in San Juan.

Clinton has also argued for providing Puerto Rico with “a fair shot at success” by extending bankruptcy protections. “The challenge is multi-faceted, and will ultimately require Puerto Rico to find a way to pay back its debtors in an orderly fashion,” the former secretary of state said last year. “As a first step, Congress should provide Puerto Rico the same authority that states already have to enable severely distressed government entities, including municipalities and public corporations, to restructure their debts under Chapter 9 of the Bankruptcy Code.”

Some Republicans in Washington have shown interest in the bankruptcy reform, yet steps to aid Puerto Rico have been stalled in Congress.

In San Juan on Monday, Sanders criticized Congress for failing to act. He also argued that Puerto Rico’s crisis has roots not just in economic instability but also in political injustice.

“The people of the United States cannot continue a colonial-type relationship with the people of Puerto Rico,” said the senator, in a comment that earned extended applause from the crowd in San Juan.

Sanders renewed his pledge to “fight for a US congressionally sanctioned and binding referendum where the Puerto Rican people would be able to decide on whether to become a state, an independent country, or to reform the current Commonwealth agreement.”

“That is a decision that must be made by the people of Puerto Rico,” Sanders said Monday in San Juan, where he made the point that economic deficits must be understood—and addressed—with a recognition of democracy deficits.