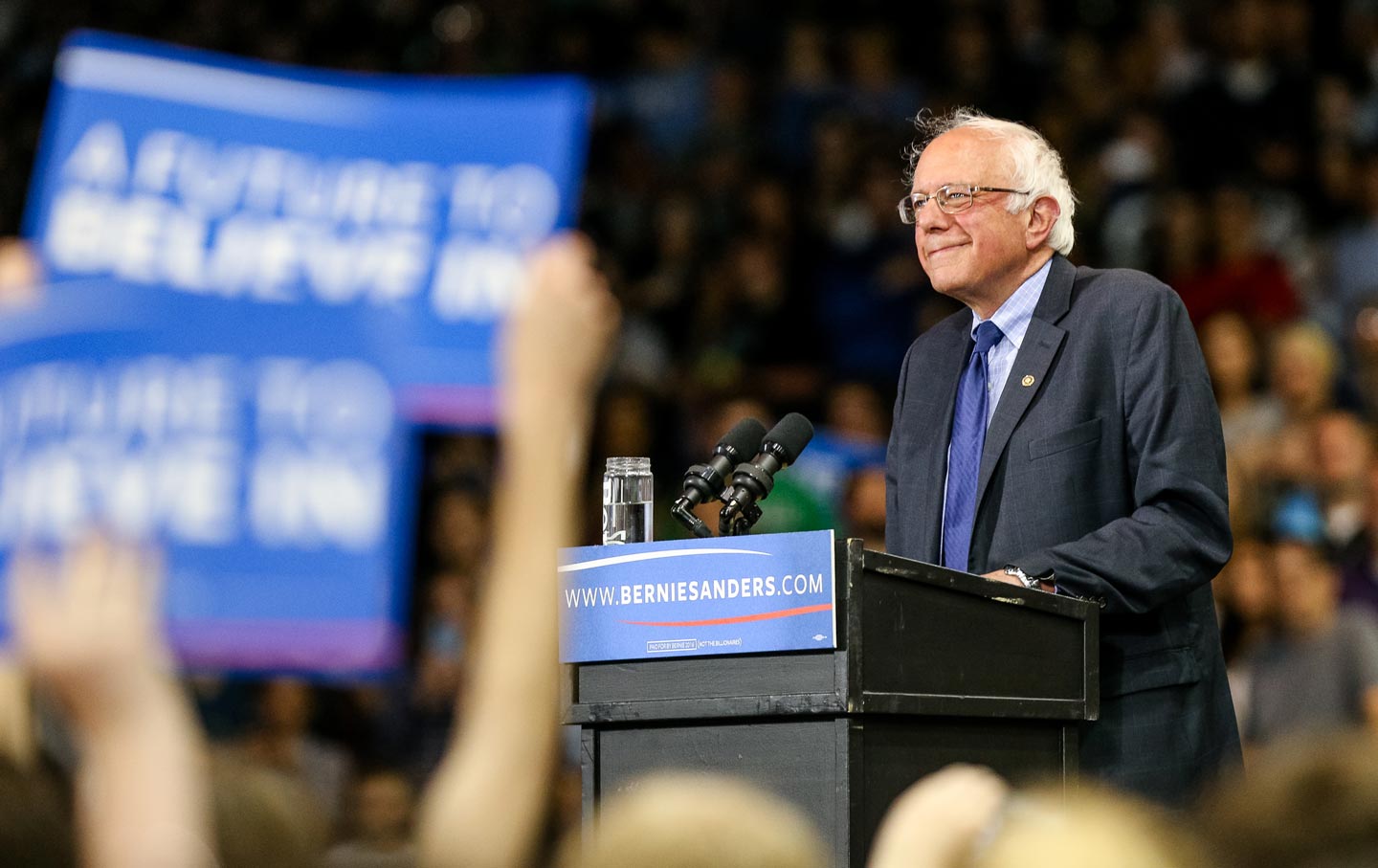 For the second Tuesday in a row, Bernie Sanders has won a Democratic primary in a state that Hillary Clinton won in the party’s 2008 nomination race. Last week he took Indiana from Clinton. This week he has taken West Virginia.

The senator is still trailing Clinton, who has prevailed in 26 contests and secured more than 1,716 delegates. Even as she was losing West Virginia, Clinton picked up 11 pledged delegates. And with unelected superdelegates counted in, Clinton is over the 2,200 mark in a race where 2,384 delegate votes are needed to win the nomination.

Sanders says Democrats must build a broad anti-Trump coalition of Americans who are angered by economic inequality.

Yet, with another primary state counted in his column, Sanders continues to upend the argument that Democratic race is done. He is still in the running. He will continue to compete for states and delegates—having declared in Oregon on Tuesday night that “we will keep fighting for every last vote.” He will continue to look for opportunities to shape the Democratic message for a fall race against the most divisive Republican nominee in modern political history.

“Our message to the Democratic delegates who will be assembling in Philadelphia is, while we may have many disagreements with Secretary Clinton, there is one area we agree: We must defeat Donald Trump,” Sanders told thousands of cheering supporters in Oregon on Tuesday night.

That Trump will be the Republican nominee in 2016 was reaffirmed by the voters of West Virginia and Nebraska on Tuesday. (Nebraska Democrats caucused on March 5 and gave Sanders a 57-43 win. However, in Nebraska’s non-binding primary vote Tuesday, Clinton was ahead.)

For Trump, Tuesday’s primaries were essentially a victory lap. Since his Republican rivals have suspended their campaigns, the only question was whether West Virginia and Nebraska voters would register significant #NeverTrump protest votes. They didn’t. With the majority of votes counted, Trump was winning 61 percent of the vote in Nebraska and 76 percent of the vote in West Virginia. (Even among Democratic primary voters in West Virginia, roughly one-third indicated that they could back Trump in November.)

Tuesday’s primary wins will give Trump a boost as he goes into Thursday’s high-stakes meeting with House Speaker Paul Ryan.

No matter how that meeting goes, however, the Democrats know they will be running against Trump.

Clinton is toughening her talk on the key issue of trade.

The question is how they will run.

About last week’s reports that Clinton was soliciting support from Republican donors who were unsettled by Trump, Sanders said on Friday, “Those are the kinds of things that make not only my supporters, but millions of Americans, nervous.”

Sanders argues that Democrats must recognize that, in many states, the dynamics of a fall race against Trump will not follow classic Democrat-versus-Republican or left-versus-right calculations. There’s an up-versus-down dynamic, as well, and the senator says Democrats must build a broad coalition of Americans who are angered by economic inequality. Noting reports that Clinton “is now reaching out to Jeb Bush’s fundraisers in order to raise money from them,” Sanders says “that really casts a doubt on the parts of millions of Americans.”

“Are you really going to stand up for the middle and working class when you’re collecting millions from Jeb Bush supporters?” asks the insurgent contender.

The argument that Sanders makes is that Democrats must mount a fall campaign that addresses the concerns of the great mass of Americans who are on the downside of the economic-inequality divide. “We are in this campaign to win, but if we do not win, we intend to win every delegate that we can so that when we go to Philadelphia in July, we are going to have the votes to put together the strongest progressive agenda that any political party has ever seen,” says Sanders, who wants to see that agenda spelled out in a platform that calls for “a $15 an hour minimum wage, an end to our disastrous trade policies, a Medicare-for-all health care system, breaking up Wall Street financial institutions…”

That’s a message that played well Tuesday in West Virginia, where the ABC News analysis of exit polling found that “Six in 10 voters said they were very worried about the direction of the nation’s economy in the next few years, by far the highest level of economy worry in a Democratic primary this year—far above the average, 40 percent, and rivaling the customary level seen in Republican primaries.” Sanders ran especially well among voters who said they were very very worried about the economy, who said they thought trade policies harm US workers and who came from coal-mining families.

Clinton took heat for saying in March that “we’re going to put a lot of coal miners and coal companies out of business.” In fairness, she promised in the same appearance, “We’re going to make it clear that we don’t want to forget those people. Those people labored in those mines for generations, losing their health, often losing their lives to turn on our lights and power our factories. Now we’ve got to move away from coal and all the other fossil fuels, but I don’t want to move away from the people who did the best they could to produce the energy that we relied on.” That’s not far from the stance taken by Sanders—who says Democrats should support “a carbon tax so we can effectively address the planetary crisis of climate change.” But the senator’s win in West Virginia (a state Clinton won in 2008 by a 67-26 margin) suggests the appeal of his economic focus.

That focus could also prove to be appealing in the fall in Ohio, Pennsylvania, and other battleground states where some recent polls have suggested Trump is more competitive than had been anticipated.

This is the point Sanders will make in the primary battles that are yet to come.

The insurgent seems to be making an impression on the front-runner. Clinton has stepped up her campaigning in one of the next primary states, Kentucky, and she’s toughening her talk on the key issue of trade. “I have said I oppose the [Trans-Pacific Partnership] agreement—and that means before and after the election,” she replied to a question from the Oregon Fair Trade Campaign, a coalition of more than two dozen labor, environmental, and human-rights organizations that is sharply critical of the TPP deal.

“I’m not interested in tinkering around the margins of our trade policy,” Clinton added. “I think we need a fundamental rethink of how we approach trade deals going forward.”

That stance moves Clinton (who as secretary of state talked up the TPP as a potential “gold standard” agreement but has since expressed her opposition) closer to the position taken by Sanders, a fierce critic of the deal who told the Oregon coalition, “In my view, the TPP is not, nor has it ever been, the gold standard of trade agreements.”

Sanders has long argued that the United States must “fundamentally rewrite our trade agreements to protect the environment and raise living standards in the U.S. and throughout the world.” Now he is arguing that the Democratic platform must make the same argument—as part of a campaign that counters the crude populism of Donald Trump with an jobs-and-justice message that speaks absolutely and unequivocally to the great mass of voters who are worried about the economy.

That, Sanders said in Salem, is a unifying message for “the American people who understand that bringing us together always trumps dividing us up.”