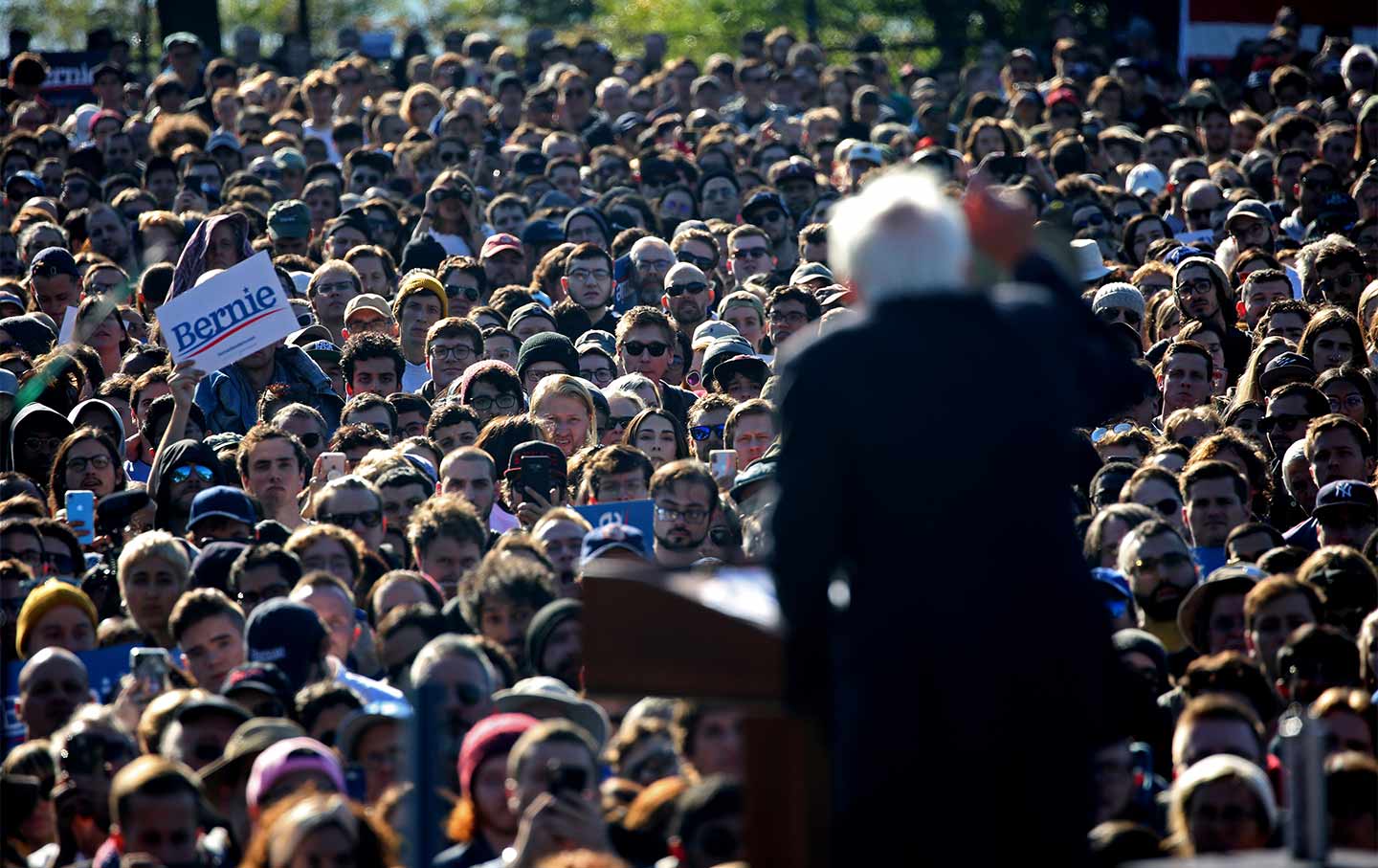 Bernie Sanders speaks to a crowd of his supporters. (Yana Paskova / Reuters Pictures)

Bernie Sanders spent the night before 2019’s busiest election day at a coffeehouse in Manassas, Virginia. He was there addressing an overflow crowd of Democrats who were scrambling to help win control of the state’s legislature by phone banking for local candidates in the hometown of state Delegate Lee Carter, a Marine veteran and democratic socialist who shocked pundits two years ago when he beat a top Virginia Republican.

It’s not uncommon for national political figures to support state and local contenders in “off-year” contests. But the campaigning was especially intense on the cusp of the 2020 presidential race. President Trump was in Kentucky Monday night to back right-wing Republican Governor Matt Bevin’s reelection bid, and he weighed in on Mississippi’s gubernatorial contest last week. For the Democrats, Virginia has been a prime focus this year. Former vice president Biden told Virginia Democrats Sunday, “You determine what’s going to happen in 2020, and that’s not hyperbole. Literally, whether we get rid of the most corrupt administration in American history…is going to depend on what happens here.”

Actually, that may have been a bit of hyperbole. But the candidates really are taking the state seriously.

Massachusetts Senator Elizabeth Warren has recorded videos with the Democratic Legislative Campaign Committee, displaying a Rorschach test to illustrate the gerrymandering of the state’s General Assembly by Republicans—and to explain why it matters to put Democrats in charge before a new round of redistricting begins. New Jersey Senator Cory Booker and Minnesota Senator Amy Klobuchar have both visited Northern Virginia to campaign for Delegate Hala Ayala. California Senator Kamala Harris stumped for Virginia contenders such as Delegate Charniele Herring last week. And on Monday night, Sanders cheered on the election-eve phone bankers making calls for Carter, state Delegate Elizabeth Guzman, and other Northern Virginia Democrats at the Jirani Coffeehouse in the Manassas Historic District.

“Bernie’s coming out because he recognizes how important this election is,” said Carter, an outspoken supporter of labor rights in Virginia. Democrats control Virginia’s governorship, and if they flip a handful of Republican seats in the state House of Delegates and Senate Tuesday, they could secure majorities and enact progressive reforms.

While Virginia is getting the most focused attention from Democratic presidential contenders this year, candidates have waded into other contests nationwide. In the spring, South Bend, Indiana, Mayor Pete Buttigieg gave an early endorsement to Satya Rhodes-Conway, who won the mayoralty in Madison, Wisconsin. Warren recently endorsed New York City Public Advocate Jumaane Williams, and she has signaled her intentions in several other races around the country. But it is Sanders who appears to have been the most strategic in his interventions.

The senator from Vermont has been commenting on state and local contests with an eye toward moving the debate to the left—highlighting issues such as housing affordability, money in politics, and criminal justice reform.

In Seattle, where big spending by Amazon has opposed City Council candidates who favor rent control and taxing corporations, Sanders has pushed back against this billionaire-class politics. “In a city struggling with homelessness, Amazon is dropping an outrageous amount of money to defeat progressive candidates fighting for working people,” the senator declared last month. “The way Amazon conducts itself in its hometown is a perfect example of the out-of-control corporate greed we are going to end.” His tweet featured a Nation article on the race, in which socialist City Council member Kshama Sawant is campaigning with the message, “Tax Amazon: Build Affordable Housing.”

In a city struggling with homelessness, Amazon is dropping an outrageous amount of money to defeat progressive candidates fighting for working people.

The way Amazon conducts itself in its hometown is a perfect example of the out-of-control corporate greed we are going to end. https://t.co/E7xfmON3de

A few days after he initially commented on the Seattle contest, Sanders tweeted about Sawant and several other progressive council candidates (Lisa Herbold, Tammy Morales, and Shaun Scott):

Bezos and Amazon dumped over $1 million into Seattle’s elections to defeat @d1forLisa, @TammyMoralesSEA, @VoteSawant, and @ElectScott2019—progressives who want corporations like Amazon to pay their fair share and end the city’s homelessness crisis.

We must defeat this greed. https://t.co/wzppnpk0i0

Scott told Seattle newspaper The Stranger that the senator’s involvement with the race represented “a seminal moment for Seattle politics.” A Seattle Post-Intelligencer headline referred to the “Bernie Sanders Slate” for City Council.

Warren also has commented on the Seattle competition, saying, “Surprise: Amazon is trying to tilt the Seattle City Council elections in their favor. I’m with the Seattle council members and activists who continue standing up to Amazon. Corporations aren’t people, and I have a plan to get big money out of politics.” It wasn’t the only time Sanders and Warren were on the same page. In June, they both backed the Democratic primary run of public defender Tiffany Cabán for district attorney in the New York City borough of Queens—a race Cabán only narrowly lost.

The Power of Bernie’s Endorsement

Before he endorsed Cabán, Sanders was focused on other local races that touched on criminal justice reform. In May, for instance, he urged Philadelphia voters to back progressive judicial candidates in the city’s Democratic primary in a Philadelphia Inquirer op-ed.

Going into Tuesday’s voting, Sanders endorsed Chesa Boudin, a public defender running for San Francisco district attorney. Boudin, Sanders said, “knows that under our constitution, everyone is guaranteed equal justice under the law, not just the very rich and powerful.” The senator noted the DA candidate’s focus on the social, economic, and racial dynamics of debates about mass incarceration and other criminal justice issues.

Boudin called a press conference to highlight the news. “I’m so honored to receive an endorsement from Senator Bernie Sanders,” the DA candidate said. “He, like me, believes in a vision for a transformative criminal justice system, one that prevents crime and supports victims while reducing racist disparities. He, like me, knows that money bail is both discriminatory and undermines public safety.”

Tuesday’s Election Could Be a Second Blue Wave

The San Francisco Establishment Is Desperate to Stop Chesa Boudin

Can Virginia Democrats Win the Statehouse in 2019?

Sanders kept making endorsements before Tuesday’s election, and candidates kept highlighting them. On Monday night, New York’s Jumaane Williams was on all his social media platforms with news of a Sanders endorsement and the message that “progressive activist energy is driving change across the country.”

As if to prove that point, Des Moines, Iowa, City Council candidate Chelsea Chism-Vargas was celebrating news that the Sanders campaign was using its e-mail lists to turn out support for her bid. “Beating big systems with big organizing can happen locally, y’all!” announced Chism-Vargas, who has been campaigning for a host of criminal justice reform measures, including a formal ban on racial profiling. “With the support of Bernie Sanders and folks in Ward 4, the people can have a win tomorrow!”

The true measure of the value of an endorsement from Sanders, or from any Democratic presidential contender, is hard to assess—especially before the votes are counted. But the candidates who got the boost left little doubt that they were energized. Chism-Vargas tweeted the get-out-the-vote e-mail from the Sanders team Monday night and declared, “This was EPIC to see in my inbox!”