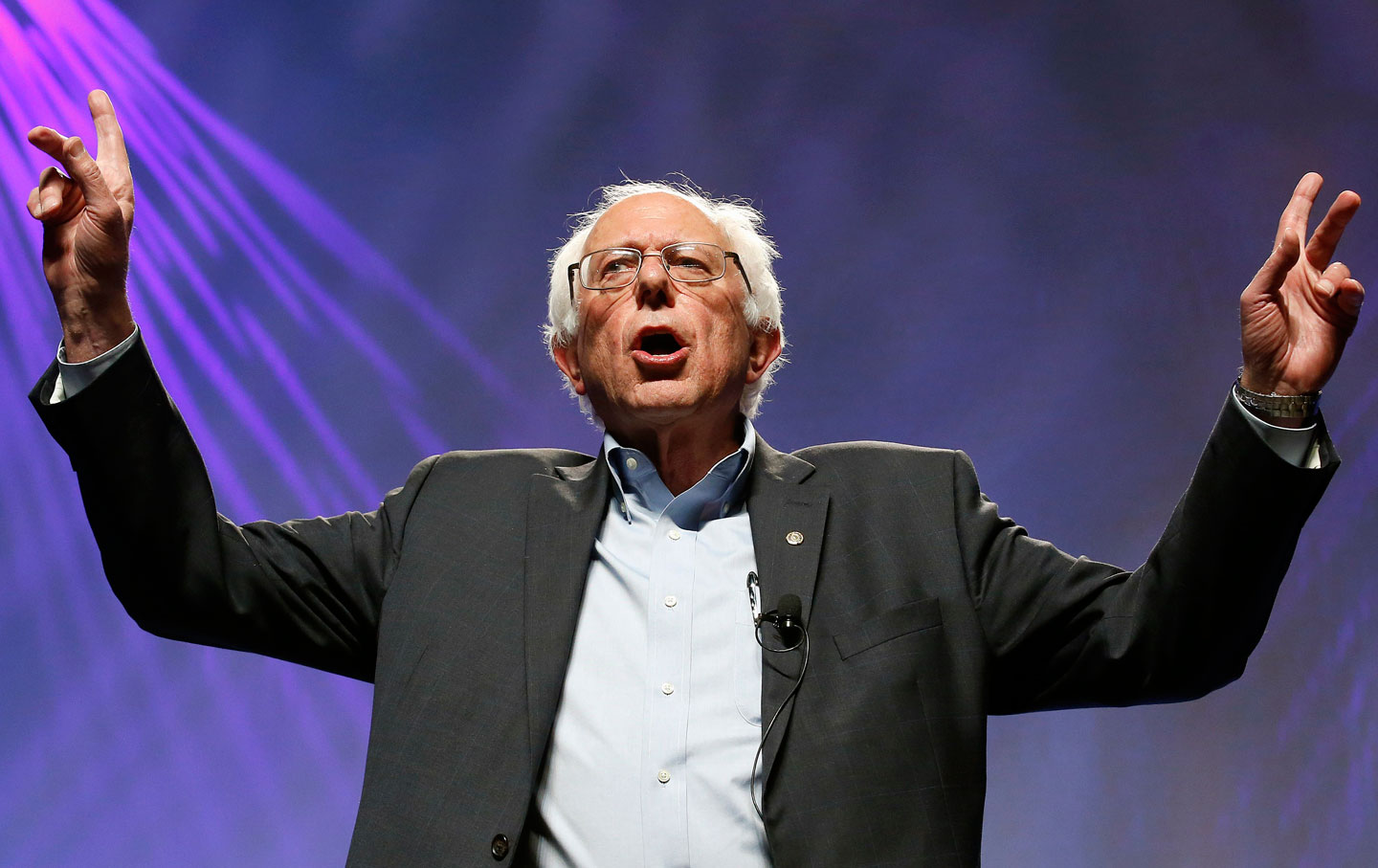 Last weekend at Netroots Nation, a group of Black Lives Matter protesters disrupted a presidential candidates’ town-hall meeting. They took over the agenda by calling out the names of black women who have died in police custody and demanded that Senator Bernie Sanders and former Maryland governor Martin O’Malley answer questions on structural racism.

Both candidates did damage to themselves; Sanders was defensive, and O’Malley’s response included the words “white lives matter.” But Sanders had far more to gain by getting this right.

I approach this incident as a fan of Bernie Sanders. But when he had the opportunity to rewrite his own narrative and broaden his own base, he failed.

The last few weeks have been good for Sanders—big crowds, solid fundraising numbers. His candidacy has already made an impact on the race and, presumably, on Hillary Clinton. It was exciting: He was speaking the truth about inequality and Wall Street, as he always had, and his numbers were climbing toward 20 percent nationally and within striking distance in New Hampshire and Iowa.

But anyone paying attention also knows that there has been a thread of doubt in his rise: Could Sanders ever make headway beyond Iowa and New Hampshire? Does he have what it takes to capture the hearts of black and brown voters who are such a significant part of the Democratic coalition?

With the protest, Sanders was presented an opportunity on a silver platter: He could overcome his perceived negatives and grow his base. All he would have had to do was act with a little humility.

But instead, he talked over the protesters, got defensive about his racial-justice bona fides, and stuck to his script. Essentially, he appeared to be arguing that economics and class trump all. For an audience mourning the death of Sandra Bland, a woman who was arrested at a traffic stop on the way to her new job before mysteriously dying in police custody, the jobs program Sanders suggested just didn’t seem like a sufficient answer.

But there was also a tactical error—a mistake in the basic craft of politics: the failure to read the room. It was hard to watch him refuse to respond to people shouting and calling out for their lives. (When Vice President Joe Biden was interrupted by pro-immigration protesters at the prior Netroots Nation, he paused, applauded them, and answered their concerns.) It was a remarkable display of cognitive dissonance when Sanders said the country needed a democratic revolution, as he looked out at one staring him in the face and ignored it.

Here’s one stab at a better response he could have given: “We need a democratic revolution, and you are part of it. I admire your courage in speaking up. I learned of the troubling death of a black woman in police custody, and, yes, I will say her name: Sandra Bland. I will say her name because black lives matter. I admit I don’t have all the answers. But your fight is my fight. For dignity and equality for all. I need you to fight with me and help me learn. Together we can change both politics and culture and ensure that black lives matter.”

I suspect a lot of people would have been blown away. He could have remade his own image in an instant. The last 12 months of living in America should have prepared him to give that kind of answer, if the prior 30 years in the public eye hadn’t. But instead, he committed an unforced error. It wasn’t fatal, but it was serious. He’ll have to start doing better on this topic, and fast, or the idea that he lacks the ability to empathize and connect with black and brown voters will take hold. It will be self-reinforcing, and it won’t be anyone’s fault but his own.

I care about Sanders’s candidacy because I deeply believe in the need for a strong political left in America. So do the Black Lives Matter activists—and they are rightly demanding not to be written out of it. Sanders represents a kind of left-wing-of-the-possible in American politics; if he can’t even earnestly address the mind-bendingly huge number of black people killed by police and in police custody, then that means the issue is off the table in mainstream politics.

One assumption I heard from critics is that people who care about the criminal-justice system, policing practices, and structural racism shouldn’t be protesting Sanders—they should be embracing him. And yet, if he’s already there, why couldn’t he say so on stage? And if he’s not, can you blame the Black Lives Matter movement for feeling that they’re not completely welcome in the progressive movement?

This constituency is demanding to have the issues of structural racism and police violence taken up within the political system. Protesting Jeb Bush or Donald Trump—as some have proposed as better targets—would never change their minds, because black people are not part of the constituency that will ever elect them; billionaires and unreconstructed neo-Confederates are, but not black people.

In one sense, the role of activists of all stripes is to create a crisis that forces a target to respond. Sanders’s play is obvious. By providing a voice of moral clarity on inequality and the concentration of wealth, he is attempting to create a crisis that forces Hillary Clinton to take a stand for or against the policies favored by Wall Street. If he succeeds in pushing Clinton to create more distance between herself and Wall Street, he’ll have succeeded even without winning the nomination; he will have advanced the values he’s fought for his whole life.

The protesters are creating a crisis, too. They’re forcing Sanders and other candidates to respond on an issue that it seems like they would have preferred to avoid. If Sanders responds by joining in their fight, they’ve pushed the Movement for Black Lives into the presidential debate and into the mainstream of Americans progressive politics—from which they currently and justifiably feel left out.

This is fair game, and an approach that fans of Bernie Sanders should understand. If the aim of this protest was to put the Black Lives Matter agenda on the national political debate, it has unquestionably succeeded. Now it’s up to Sanders to embrace those issues, or else to miss the opportunity, and create one for other candidates.

While Clinton has seemed more comfortable talking about issues of race on the stump thus far, Sanders has the most to gain by embracing those issues, and perhaps the most ideological sympathy. I hope he does embrace them—and not just for his own sake.

Economic inequality and structural racism are not the same, but in American history, they’re deeply connected. We will not succeed in attacking economic inequality without erasing racial inequities. And any progressive voter who understands that should cheer at the prospect of any candidate taking up those two fights together.

Some critics raised the idea that these protesters crowded out other issues. I don’t buy it. It’s important to note the same protesters and groups (notably the Black Alliance for Just Immigration) were key supporters of the pro-immigration protest in Phoenix against notorious Sheriff Joe Arpaio the day before. They know these movements are all connected.

There weren’t other protests on climate or the minimum wage or any other issue in competition with this one. But beyond that, one demand for justice does not detract from other rightful claims. If anything, they reinforce one another. For people who simply wanted to hear the candidates answer questions and present their stump speeches, there are plenty of opportunities for candidates to share positions on the issues—at least on the ones they’re not ducking.

The Black Lives Matter agenda is not the only issue of moral urgency, but it most certainly is one of them. All progressives should applaud activists who took the opportunity to push it forward.

It’s easy to laud the suffragists who tied themselves to the White House or the Freedom Riders who boarded buses headed South. Let’s not forget that those were unpopular actions once but time has borne them out. Confrontational actions can be a vital component of making change. Imagine our nation in 50 years. Isn’t there a that chance that a confrontational movement to end police brutality and the prison industrial complex might look pretty wise over the long run? I think so.

Sanders cited his own history in the civil-rights movement of the 1960s from the stage. But I don’t think it’s controversial to suggest that Ferguson and Staten Island and Baltimore and Milwaukee and Charleston have proven that the work of the civil-rights movement is not complete, that there is much more change needed to ensure black lives are accorded the dignity and value that are more universally given to white lives.

So let’s give this generation of activists the benefit of the doubt. If one tactic doesn’t work, let the leaders of that movement evaluate it and pick a different one. But it is nonsensical to condemn an action that is so clearly located in the tradition of the transformative successes in America, on civil rights and essentially every other issues.

I often think of Martin Luther King Jr.’s “Letter from a Birmingham Jail.” Today it seems that there are still a lot of people out there who support the goals but deplore the tactics, or who seem willing to set a timetable for another person’s freedom.